Reducing negative impact on building and the natural environment is the main objective of sustainable design that promotes the environmental quality and the quality of building, which is mainly related to the envelope design of the building. Hence, the main research problem is determining the building envelope shape effect, whether curved or tilted, so as to be more effective in the location of solar cells on its surface and measure the efficiency of each; therefore, the study model could be divided into the design of the building envelope (independent variable) and solar absorption efficiency (variable dependent) where the basic criterion will be environmental suitability and sustainability. Methodology of the study will be based on the theoretical study, the collection of information and descriptive analytical method, in addition to the practical approach and the use of simulation software programs to reach the most important conclusions and recommendations.

The use of solar energy is an important issue to be considered when designing buildings, especially in the Egyptian Western Desert region, which is considered as a global  solar storage area with a high solar radiation, (Ali, Rashed and Ahmed) because of that it was chosen as an important location in which a model of a residential building will be designed and tested. The research model as illustrated below Figure 1. The research problem was identified by the impact of the building's envelope design on the sustainability of the building and solar energy the research model. 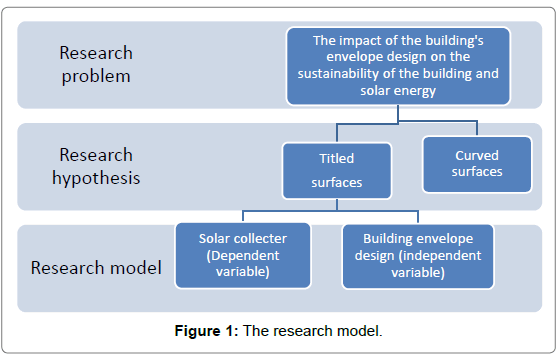 The aim of this paper is to give an envelope design model which shall be proportional to the location of the solar cells on the building’s surface and shall be calculated through simulation software such as: Skilion software (Figure 2). 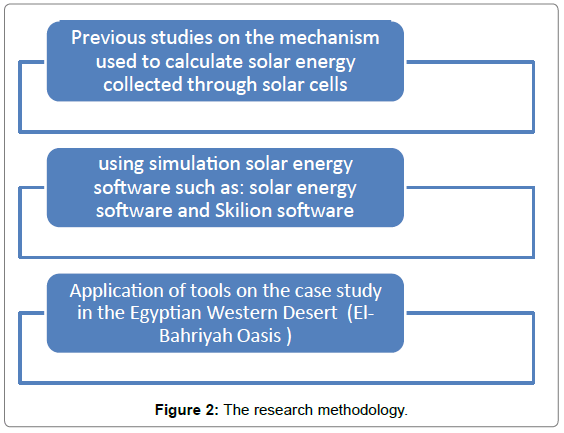 Solar energy has been used to generate electricity in many applications, including power plants, water desalination, traffic lights, street lighting and the operation of some electrical appliances [1].

The SEGS solar power generation systems are actually thermal solar plants. The solar thermal is used by curved longitudinal mirrors in the form of equal parts in the production of electricity [2].

PV Array: A PV Array is made up of PV modules, which are environmentally-sealed collections of PV Cells the devices that convert sunlight to electricity.

Balance of system equipment (BOS): BOS includes mounting systems and wiring systems used to integrate the solar modules into the structural and electrical systems of the home energy usage

DC-AC inverter: This is the device that takes the dc power from the PV array and converts it into standard ac power used by the house appliances.

Metering: This includes meters to provide indication of system performance. Some meters can indicate home.

Other components: utility switch (depending on local utility) (Figure 3). Through the study conducted by the National Planning Institute in Egypt in 2007, the most important policies of the local renewable energy management were identified. Therefore, the various regions in Egypt were classified and determined by the solar energy available in each of them. Oasis area is ideal for the use of solar energy (Table 1).

Table 1: Solar energy available in different areas of Egypt and their use.

Egypt contains a large number of oases, including Siwa Oasis and the oasis of Dakhla, which is characterized by sales [6]. El-Bahriya oasis, which stretches across a vast area of desert surrounded by black quartz hill, is known as the Black Desert. It also houses a large number of stunning places such as the Ptolemaic tombs, the Bawiti Museum, Jabal al-Dasta and the mountain of the scoop, mud-black, salt lake. 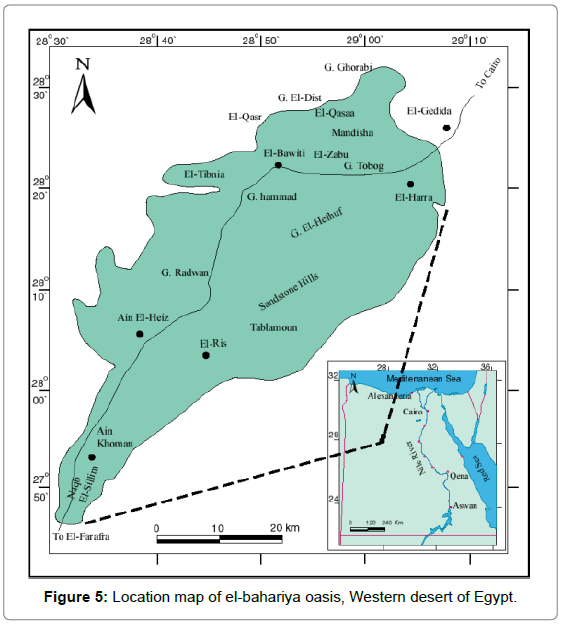 The design concept of the proposed building is considering the building as a part of the earth and is dissected from it. It is complementary to it and to the elements existing on the earth from its birth until the moment. The design concept has two main forms: the first form is the sharp formations expressed by nature and rocks (Figure 6) and there is another aspect of nature it is the curves taken by most formations such as the flow of water and water oases.

Proposal: The first suggested shape is the sharp design with sharp ends, which are naturally found in the form of rocks. The proposed design consists of 150 m2 and consists of a lounge, kitchen, two bedrooms and a bathroom in addition to the external spaces. External openings and windows were signed towards the northern side and reduced to the south due to the angle of the sun falling in that area.

Analyse shade and shadow: Shade and shadow during year: it has been noticed that the southern elevation have to minimize its openings. The researchers replace the position of the openings on the façade. The southern sharp mass was reshaped too (Figure 7).

Analyse solar energy: Using Solar Energy Analysis – Radiation report, the researchers found that the slop roofing on the southern mass has the largest number of solar radiation of (2450) W/m2 (Figure 8). The researchers replace it with a new mass that have a wider slope surface and remove the Sharpe ending of it to suit the function of the building which has a residential use.

Identify problems/potential of improvement: By analysing each face for the propsed building, it has been found that face (2) + face (4) have the lowest amount of expected power reduced of the solar panels and the normal power of given system. Hence it has been notuced regarding to the reading above that face (11) has the largest amount of power of the solar panles of (6.12) KW (Figures 9 and 10). Analyse shade and shadow: It has been noticed that the southern elevation have to minimize it’s openings and making it small. The researchers replace the position of the openings on the façade. and made it small and random on the surface so as to enter indirect lighting (Figure 11). 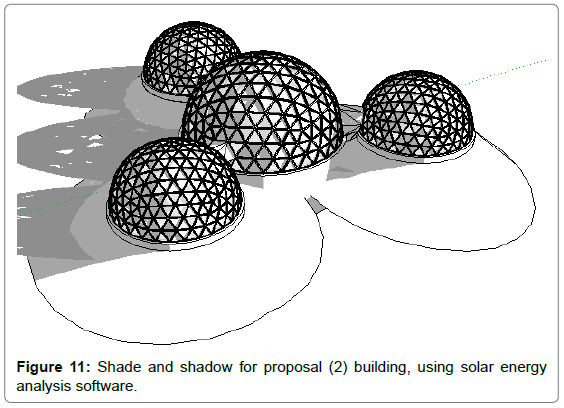 Analyse solar energy: Using Solar Energy Analysis – Radiation report, the researchers found that the round roofing have an average amount of solar radiation of (1173) W/m2 (Figure 12). 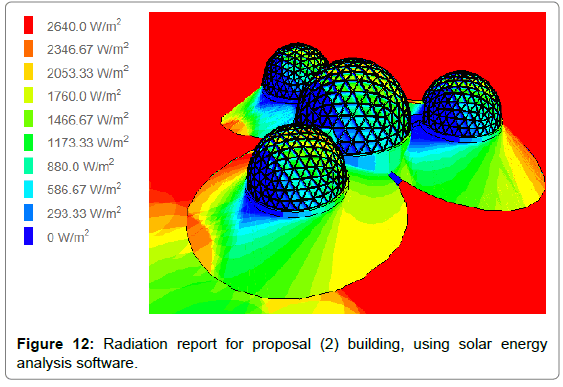 The researcher decided to place the solar panels on the artificial ground on the building site which has a larger amount of solar radiation than the other masses (2053) W/m2. This section will review the readings obtained for both proposals (first one: the sharp envelope and the second with the streamlined envelope) in order to reach the design of the envelope that is compatible with the Western Desert of Egypt and which can be consistent with the efficiency with solar panles system (Table 2).

The type of solar panels intended for use on the surface of this building is crystalline silicon. When analyzing the readings obtained through the Skelion program, through which a system is designed to collect the largest possible amount of solar energy (Table 2). Nominal power of the PV system is (6.1) KW, the Estimated losses due to temperature and low irradiance is (13%) and the estimated loss due to angular reflectance effects is (2.6%).

Based on the previous readings, the most important months of the year were highlighted in which the solar panels system is the highest efficiency (Jun and Jul) (1070) KW as in the month of (Jan and Dec) in which the efficiency ratio is low (691) KW (Figure 14). 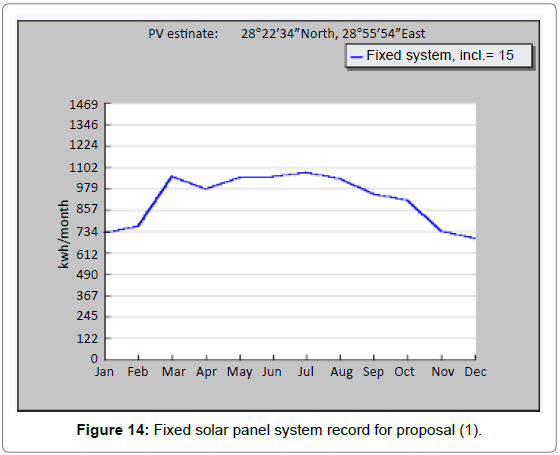 Based on the previous readings, the most important months of the year were highlighted in which the solar panels system is the highest efficiency (Jun and Jul) (979) KW as in the month of (Jan and Dec) in which the efficiency ratio is low (500) KW (Figure 15). 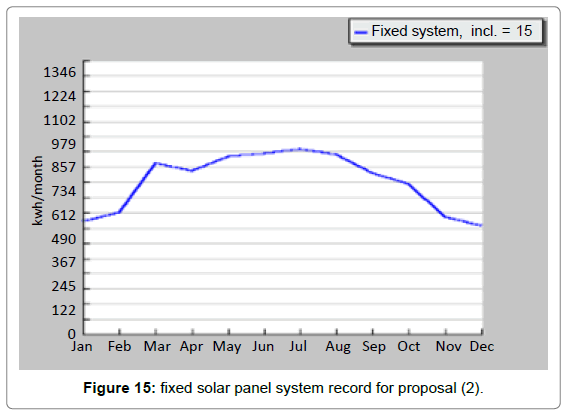 By analyzing the components of the building from walls and ceilings, the most exposed elements of radiation were the roofs and the southern and western façades. It can be used as a base for the dry, (The ideal form is the one that obtains the lowest temperature of solar radiation and studies the different configurations of the buildings and evaluate the best ideal forms which are gaining less heat energy for the building.

Through the readings above that obtained by comparing the proposed curved envelope of the desert building with the curvature , it has been found that the ceilings that give the largest amount of shadows and give the least area exposed to solar radiation are curved. The curved ceilings have the ability to reflect the solar radiation falling as well as being given a self-shadow on the ceiling itself, then comes the flat and winding ceilings. This means that the curved roofs in the form of domes are the best surfaces as architectural formation of the roofs, where they use a good reflector for solar radiation and give the highest amount of shadows on top of each other unlike the flat surfaces.

The slanted surfaces are excellent surfaces for absorbing the largest possible solar energy through solar cells and converting them into electrical energy. On the other hand it is possible to exceed the need for the use of the residential building. Therefore it has been concluded that the curved outer envelope is very proportional to the use of residential buildings through the outcomes reading. The solar cells can be distributed around the center of the dome and it will be sufficient.

However, the prevailing Egyptian desert conditions also result in extreme summer temperatures and high dust levels, both of which have a negative impact, which lead to rapidly deterioration of recent solar energy appliances. Therefore, it needs more researches to tackle these technological challenges. Because of their relatively high cost and limited capacity utilization of PV panels as power systems in buildings constructions is very limited.

Copyright: © 2017 Ibrahim MA, et al. This is an open-access article distributed under the terms of the Creative Commons Attribution License, which permits unrestricted use, distribution, and reproduction in any medium, provided the original author and source are credited.