The Role of Micronuclei as a Screening Tool in Oral Cancers

The Role of Micronuclei as a Screening Tool in Oral Cancers

Background: The assessment of Micronuclei frequency in exfoliated oral epithelial cells has been shown to correlate with severity of the chromosomal damage and seems to increase steadily in malignant lesions.

Aim: To evaluate the frequency of micronuclei (MN) in oral exfoliated cells of malignant oral lesions in tobacco chewers and comparing them with that of healthy individuals.

Materials and methods: The study participants were divided into two groups consisting of 25 cases with malignant oral lesions in tobacco chewers and 25 normal healthy controls. The cytosmears were stained with Papanicolaou stain. The micronuclei frequency was identified using Tolbert's criteria. Later the oral lesions were confirmed with tissue biopsy.

Results: The frequency of micronuclei was found to be higher in malignant oral lesions as compared with controls.

Conclusions: Hence, micronuclei can be used as a biomarker of chromosomal damage, which is a useful diagnostic as well as prognostic indicator.

Oral cancer is one among the 10 most commonly occurring cancers as stated by World Health Organization (WHO) and annually 5,75,000 new cases are detected. The mortality is 1.8% worldwide, constituting about 2.1% in males and 1.3% in females. Oral cancer is one of the top three cancers in India accounting for 30% of all cancers [1]. India is said to be the oral cancer capital of the world. In India, about 90% of the oral cancers are related to tobacco use. The World Health Organization (WHO) has calculated the rise of mortality due to tobacco related diseases in India from 1.4% in 1990 to 13.3% in 2020 [1]. At present, the most reliable way to control and reduce oral cancer is to merge early diagnosis with timely and appropriate treatment. As more than 90% of all oral neoplasms are squamous cell carcinomas, almost all of them are diagnosed from lesions on the mucosal surfaces. Hence oral exfoliative cytology has become a promising tool in early diagnosis of high risk individuals of oral cancer [2,3].

Micronucleus is an erratic nucleus which is formed during the anaphase of mitosis or meiosis. Micronuclei are extra nuclear cytoplasmic bodies seen in association with chromosomal aberrations. They are usually formed in the basal cells of epidermis and are shed as exfoliated cells on maturation. Hence micronuclei assay can be used as one of the biomarkers of oral cancer, as it is increased in oral neoplastic conditions. Micronucleus can be identified by various special stains in exfoliative cytology [3-5]. Micronucleus in oral exfoliated cells is a marker of chromosomal damage caused by toxic agents like tobacco and tobacco-related substances, radiation and alcohol. The micronucleus assay has been used to assess the chromosomal damage in oral squamous cell carcinoma and correlate well with the histological grading of oral squamous cell carcinoma [6-10].

Compared to tissue biopsy, oral cytology technique is simple, noninvasive, relatively painless, and tolerated well by patients. It can be used for diagnosis, identification of recurrence after treatment and also as a prognostic marker following therapy. Moreover, it is also used for mass screening and is reported faster within short duration.

Aim: To evaluate the frequency of micronuclei (MN) in oral exfoliated cells of malignant oral lesions in tobacco chewers and comparing them with that of healthy individuals.

This was a hospital based case control study carried over a period of 1 year from July 2013 to July 2014, conducted in a tertiary care hospital, Coimbatore Medical College Hospital. The age of the participants ranged from 20 to 65 years. The study sample consisted of 50 participants and divided into two groups of 25 each, a control group of non-tobacco chewers, with clinically normal oral mucosa and other group of tobacco chewers with oral malignant lesions. Before sample collection, written and informed consent was obtained from the patient. The patient was enquired about the lifestyle habits including smoking, alcohol and tobacco habits, duration of the habits, frequency of usage, any complaints, investigations taken and finally about treatment and medication details. Buccal smears were taken and fixed with 95% isopropyl alcohol and stained with Papanicolaou stain. In this study, cellular evaluation was performed using optic microscope with 100x magnification and 500 cells per smear were counted in zigzag method. The criteria for selecting cells with micronuclei as provided by Tolbert et al. [11] were as follows:

Little or no overlap with adjacent cells

Little or no debris

Then tissue biopsy was taken from the study participants and the oral lesions were evaluated and diagnosis confirmed. 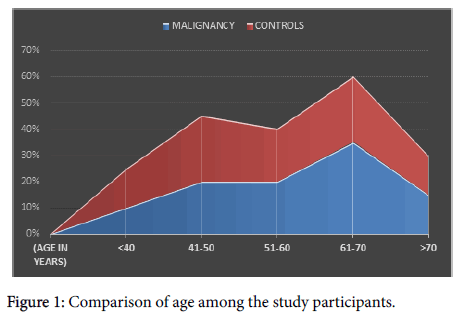 Figure 1: Comparison of age among the study participants.

The incidence of carcinoma was higher in females with male to female ratio being 1:2. This finding was in contrary to the worldwide sex incidence with male preponderance. This was probably because of increased prevalence of tobacco chewing in females.

In the present study, the commonest site of occurrence of malignancy was found to be buccal mucosa with 50% incidence (Table 1). This was the favourable site in tobacco chewers since the betel quid is placed here for quite a long period which tends to cause chronic irritation. The tongue is the next common site with 30% incidence (Figure 2). 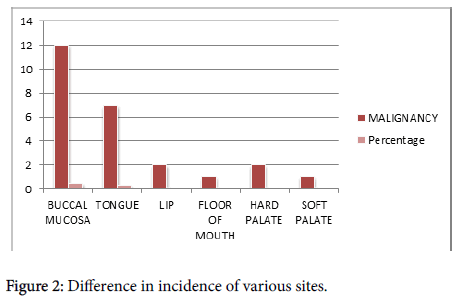 The MN frequency was found to be 3.4 in normal healthy controls and 33.28 in carcinoma cases which were increased manyfold. Since the values are not in normal distribution, Wilcoxan Signed rank test was performed between malignant and non-malignant individuals and was found to be statistically significant (p<0.00001).

The annual incidence of oral cancer in India is around 75,000 to 80,000 [1]. Squamous cell carcinoma is the commonest tumour in the oral mucosa accounting for 90% to 95%. Around one third of the cancer mortality in India is said to be related to tobacco. Oral exfoliative cytology is used for screening cellular alterations in preneoplastic and neoplastic oral lesions. Mass screening by cytology has been reported to have 96% reliability and 90% accuracy in detecting squamous cell carcinoma. The sensitivity is about 94% and specificity is 100% [12-15].

The pattern of formation of micronucleus in an individual depends on the type and amount of carcinogen exposure. The pattern produced by single and short term exposure will be different from those causing uniform and chronic exposure. The micronuclei can be demonstrated in erythrocytes, lymphocytes and exfoliated cells like oral, nasal and urothelial cells. This assay is used to evaluate the genomic damage occurred in vivo . Hence, the assay is employed in the analysis of cancers occurring in oral cavity, nasal cavity, bronchi, cervix, oesophagus, bladder and urinary tract. Micronucleus can be identified by many staining techniques like Fuelgen, acridine orange, 4',6- diaminido-2-phenylindole (DAPI), Giemsa, May Grunwald-Giemsa and Papanicolaou stains. Micronucleus assay is also done by using FISH (Fluorescence in situ hybridization) with a centromeric probe and micronucleus is seen as bright yellow green spots [3-5].

The present study was aimed at evaluating the differences in micronuclei frequencies. The incidence of oral malignant lesions is found to be common after the age of 50 years. As the frequency and duration of tobacco chewing increases, there is significant increase in the malignant transformation. Similarly, the incidence was observed to be higher in females and was probably due to tobacco quid chewing predominantly seen in women and also because of the exclusion of other lifestyle habits like smoking and alcohol [15,16]. This result is compared well with the study conducted by Piyathilake et al. where micronuclei frequencies are 2.8-fold higher in women when adjusted for age, race, smoking, alcoholism and nutritional deficiencies [17].

The mean MN was evaluated to be 3.4 and 33.28 in healthy controls and malignant lesions respectively. The mean difference among the different study population was found to be statistically significant (p < 0.0001). The micronuclei seen in various oral cancers were shown in Figures 3-5. 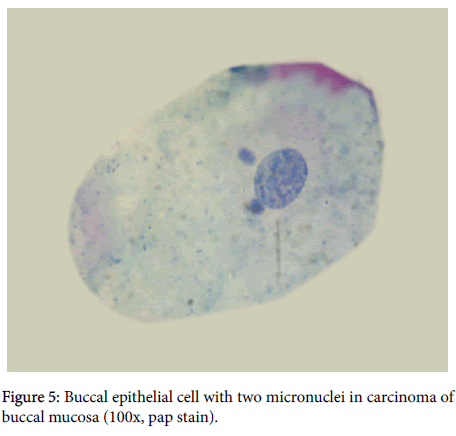 Anila et al. observed significant increase in micronuclei in buccal exfoliated cells in betel quid chewers as against healthy individuals. The micronuclei frequency was still higher in smokers who are also chewing a mixture of betel nut and tobacco [20].

In this study, the malignant oral lesions were found to be mostly Squamous cell carcinoma of which 10 cases were well differentiated, 9 showed moderate differentiation and 4 were poorly differentiated. One of the cases was Verrucous carcinoma and other was Sarcomatoid carcinoma. The MN frequency ranged from 22- 27 in grade I tumors, 25-40 in grade II and more than 40 in grade III tumors.

Palve and Tupkari, emphasised MN frequency as a valuable prognostic marker in oral SCC. They found good correlation of histological grades of squamous cell carcinoma and micronuclei in increasing proportions. The MN was found to be increased than in controls and similarly in increasing grades of the tumour [21]. Kumar et al. evaluated 86 cases of oral squamous cell carcinoma and correlated the micronuclei frequency with different grades of SCC. They concluded a good association of cytogenetic damage with micronuclei frequency and carcinogenic effects of tobacco and paan [22].

Thus, micronucleus in oral exfoliative cells is a good promising domain in detecting cytogenetic damage and aiding in early diagnosis, treatment and prognosis. However, the buccal MN assay has to be standardized in view of sample collection, staining modalities and diagnostic criteria followed.

Copyright: © 2019 Suganya R, et al. This is an open-access article distributed under the terms of the Creative Commons Attribution License, which permits unrestricted use, distribution, and reproduction in any medium, provided the original author and source are credited.