The Use of Subepithelial Connective Tissue Graft Technique to the Treatment of Class I Miller Recession in Lower Tooth with Abrasion: Case Report

Gingival recession can cause aesthetic problems, discomfort for cervical dentin hypersensitivity and can be treated by connective tissue grafts. This case report used subepithelial connective tissue graft to treatment class I Miller recession in premolar lower with abrasion. The premolar were treated by scaling and root planing chemical modification with 24% ethylenediaminetetraacetic acid (EDTA), bur shaped reconteur of abrasion lesion and subepithelial connective tissue graft combined with coronal flap. The results provide excellent root coverage, improve the root hypersensitivity and abrasion lesion. Although the longevity of this successful treatment depends on the diagnosis and removal of the causative agent, as well as the patient's cooperation in maintained of oral hygiene.

Gingival recession is defined as apical migration of the junctional epithelium [1], occasioned exposure of root surfaces and can be localized or generalized. It should bring on hypersensitivity of the teeth and esthetics problems and also may retain dental plaque, which can cause root caries [2,3].

Gingival recession had classified by Miller [4] which predict the success of root coverage treatment in isolated Miller Class I recession based on absence of bone loss in local areas with apical migration that does not reach mucogingival junction [4].

Periodontal plastic surgical procedures aim to protect and maintain the patient's oral health over his lifetime for adequate function as well as esthetic appearance [5]. Subepithelial connective tissue grafts has been used to the treatment of gingival recession and can improved the high and width of the keratinized tissue providing satisfactory esthetic results for root coverage and it has been indicated in areas with cervical abrasions [3,6-9].

Erosion or abrasion is a common lesion that has founded in cervical areas of tooth. It have been describes a theoretical process according to occlusal forces create stresses in enamel and dentin along the cervical area and predispose it to erosion and abrasion, also bruxism may be the primary cause of angled notches at the CEJ [10]. The role of toothbrush abrasion has been discussed in the etiology of abrasion [10,11].

The purpose of this article is to report the use tissue graft technique combined with the coronally flap on a treatment of Miller Class I gingival recessions associated with abrasions in lower premolar.

A healthy 18-year-old girl presented with a chief complaint of a hypersensibility in buccal face of lower premolar [10]. A periodontal examination performed reveal 1 mm and 2 mm of probing depth in buccal and distal faces respectively and 2 mm of gingival recession on buccal face with abrasion lesion (Figures 1 and 2) classified as Miller class I. 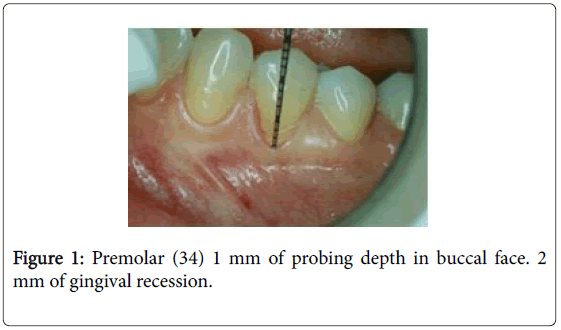 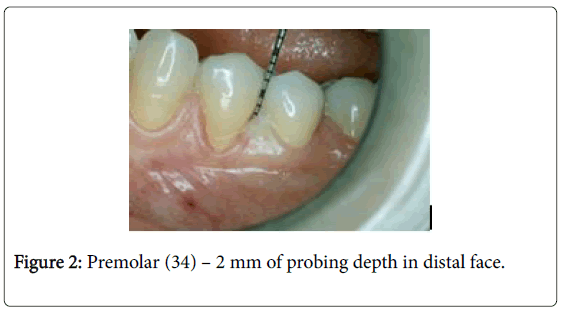 The gingival line in the mandibular third sextant was found to be thinner width of attached gingiva. Our treatment goal was to minimize gingival recession using subepithelial connective tissue grafts combined with the coronally positioned flap. A thorough extraoral and intraoral examination was performed.

Two treatment options were presented to the patient: subepithelial connective tissue grafts combined with the coronally positioned flap or restoration of Class V lesions with materials. After careful discussion, the patient opted for the subepithelial connective tissue grafts, she reported that she wanted to reestablished gingival margin; she did repeated restorations and generally lost it, each changes restorations she lost a moderate amounts of the remaining tooth structure.

A written informed consent was taken and the patient was instructed about post-surgical complications such as possible pain, post-operative bruising and extraoral swelling.

Premedication was used to prepare the patient for anaesthesia and to help provide optimal conditions for surgery. It was administration of antiinflamatory drugs (dexamethasone – 4 mg) unic dosage, 1 hour before surgery. Local anesthetic (Mepivacaine with 1:100.000 adrenalines) was administered in receptor and donor sites. Receptor site were treated by scaling and root planing with Gracey currets and 24% ethylenediaminetetraacetic acid (EDTA) gel application for 2 min, followed by washing with saline solution to chemical modification of the root surface. The bur was used to give new shape to the abrasion lesions in cervical face (Figure 3). 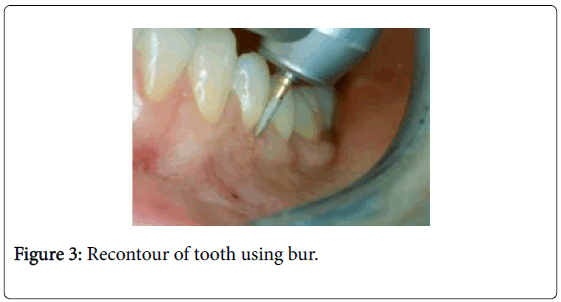 An intrasulcular incision was given on the buccal aspect of the involved tooth. A horizontal right angle incision was then made into the adjacent interdental papilla at or slightly coronal to the level of the cemento-enamel junction (CEJ) of the tooth presenting the defect.

Two divergent vertical incisions were given starting at least 0.5 mm from the gingival margin of the adjacent teeth and extending into the alveolar mucosa. The intrasulcular, horizontal right angle incision and the vertical incisions were connected and a trapezoidal full-thickness flap was raised 3-4 mm apical; from there, a partial-thickness dissection was then performed apically to allow for coronal positioning of the flap [12] (Figures 4 and 5). 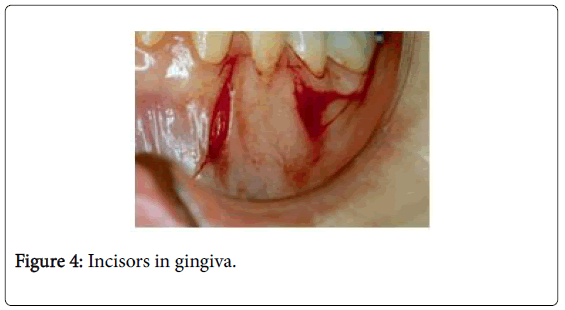 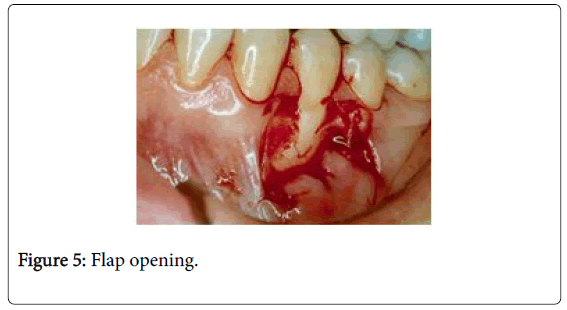 The graft was placed over the recipient site such that its coronal margin was located at the CEJ and its apical margin at least 3.0 mm apically beyond the base of the defect [12] (Figure 6). Coronal advancement of the partial-thickness flap was done so as to completely cover the graft without tension. The coronally positioned flap was secured in position by independent sling sutures using 4-0 seda sutures [12] (Figure 7). 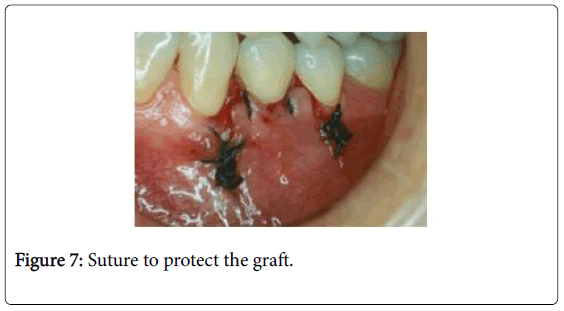 Figure 7: Suture to protect the graft.

Independent interrupted sutures were placed along the vertical incision line for close approximation.The gauze was moistened with saline and performed compression for 5 minutes in the donor area to improve the adaptation of the graft.

Post-operative instructions included soft diet, limited facial movements, no brushing around the surgical site for 14 days were explained [12]. The patient was instructed to rinse gently with 0.2% chlorhexidine gluconate twice daily for 2 weeks. Postoperative pain control was done with 750 mg of paracetamol during 6/6 hours for 2 days. Sutures were removed 1 week later. Occusal adjustments were performece to eleminate forces that result in flexure and failure of enamel and dentin [10]. After 4 weeks, the patients were instructed in mechanical plaque control and were included in oral hygiene program with visits scheduled once a month during 3 months (Figure 8). 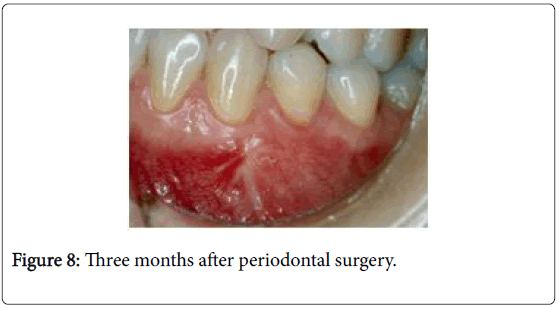 Get a predictable level of root coverage has been a goal of periodontal therapy, although some points need to be discussed to achieve this goal. This case reported purpose to use subepithelial connective tissue graft combined with coronal flap to treat class I Miller recession in premolar lower with abrasion. The technique was effective to root coverage and resolve root hypersensitivity and abrasion lesion.

Connective tissue grafts are considered the gold standard for root coverage and it demonstrated the highest success rates with the greatest amount of predictability [13,14]. Wennström [15] in 1996 reported an average of root coverage using connective tissue graft is 89% ranging over 50%-98%. The present case report shows the use of subepithelial tissue graft combined with coronally flap to the treatment of premolar area where it had thin gingiva biotype.

Mutthineni et al. [5] reported that the vitality and high survival potential of subepithelial connective tissue graft are achieved by sources of the blood supply from the gingival flap. In this case coronally flap combined with subepithelial gingival graft provide blood supply and protected the graft. Advantages were recorded by used of coronally flap, the connective tissue was not exposed, and healing was not affected and was predictable. There was a chance for graft epithelium and flap epithelium to heal by primary intention. Only disadvantage of this technique was pain and discomfort of a donor site [16].

In spite of gingiva biotype, Kao et al. [17], Mutthineni et al. [5] and Hoeppner et al. [18] reported that tissue biotype can affected the aesthetic outcomes. Kao et al. [17] reported that thin and thick gingiva tissue and concluded that thicker tissue is relative better to influence the tissue quality during restorative procedures. In this study, after 3 months periodontal therapy improved thick tissue after root coverage in class I Miller recession and were efficient to eliminate the root hypersensitivity.

The purpose of the EDTA conditioning, in this study, was to demineralize the root and removal of smear layer produced due to instrumentation to facilitate fibroblast adhesion and locomotion by collagen exposure [19,20]. The in vitro and in vivo effects of EDTA root biomodification are not consistent evident [20,21].

The abrasion lesion suggests that they could be caused by multifactorial etiology. Abrahamsen [22] suggested that toothbrush abrasion replaced with toothpaste abuse is abrasive enough to cause this type of damage. Shetty et al. [23] suggested that cervical lesions should demonstrated abfraction lesions present primarily at the cervical region of the dentition and are typically wedge-shaped, with sharp internal and external line angles. Subgingival lesions have also been observed.

In theory, the shape and size of the lesion are dictated by the direction, magnitude, frequency, duration and location of forces that arise when teeth come in contact [23]. Abfraction is postulated to be responsible for chronic sensitivity of the teeth to cold foods and liquids [10,24,25]. In this case report, the abrasion area was compatible with abfraction, so we also have been proposed occlusal adjustments and altering toothbrushing techniques.

Oral hygiene program improve stability of periodontal tissue are important to the longevity of the periodontal treatment. Zucchelli and De Sanctis [26] reported the successful root coverage results obtained with the coronally advanced flap for multiple recession defects were well maintained over the 4-year observation period.

The authors suggest negative patient characteristics such as a lack of compliance with a supportive care program and individual susceptibility to gingival recession were significantly associated with the recurrence in gingival recession.

This study accompanied the healing during 3 months and included patient hygiene program to preserve the root coverage [26].

This report is simple case reports of the use of the subepithelial connective tissue graft that can help clinical dentistry indicate surgical procedures and periodontal maintenance.

Based on this case reported the subepithelial connective tissue graft associated with coronally repositioned flap provides an excellent root coverage in case of gingival recessions with abrasion lesion and improved the root hypersensitivity.

Copyright: © 2017 Portero PP, et al. This is an open-access article distributed under the terms of the Creative Commons Attribution License, which permits unrestricted use, distribution, and reproduction in any medium, provided the original author and source are credited. 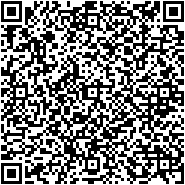