Material and Methods: A descriptive and retrospective study was carried out into a series of thirty-three case (33) cancer patients reached of chronic myeloid leukemia followed on the service of Hemato-oncology CHU Annaba in Algeria during December 2013 to April 2014.

Results and Discussion: The study of the tolerance showed that Imatinib (Glivec®) gave only one case with complications colopathy type and respiratory allergy with disappearance of the osseous pains and the arterial hypertension obtained with Imatinib(Imatib®); what confirms a good tolerance of the specialty of Glivec® compared to Imatib®.We did not note any complication for Dasatinib and Nilotinib, with reduction in the specific undesirable effects (Dasatinib gave 16.67% of the osseous pains, Nilotinib 9.09% of osseous pains and 9.09% of myalgia), reduction in the asthenia (33.33% for Dasatinib and 9.09% for Nilotinib), this testifies to a better tolerance of the new molecules Tyrosine kinase inhibitors Dasatinib and Nilotinib compared to the molecule of reference Imatinib.

Conclusion: Through these data we raise the interest of selection of the therapeutic protocols and the importance of a strict monitoring of the undesirable effects of targeted therapy in order to ensure the best taken in charge for these patients.

The objective searched in the use of the anti-cancer treatment is to reach tumoral cells in order to destroy them in a way as selective as possible, while operating one or more targets, all this explains the multiplicity of the research undertaken in the field of cancerology. Progress of molecular biology has allowed the emergence of different therapeutic approaches which deeply do not affect the operation of the healthy cells: immunizing defenses of the organization, cellular differentiation, the angiogenesis and the apoptosis constitute thus the principal explored ways. However, these ways are generally unbalanced by surexpression of a protein having a strong activity Tyrosine kinase, this led to the marketing of anti-cancer non cytotoxic: Imatinib (Imatib® or Glivec®) first inhibitor of Tyrosine kinase, this discovery was followed by the introduction of other molecules of the same classe Dasatinib, Nilotinib. The main objective was to evaluate the tolerance with the Inhibitors of Tyrosine Kinase (TKI) among cancer patients [1-3]. 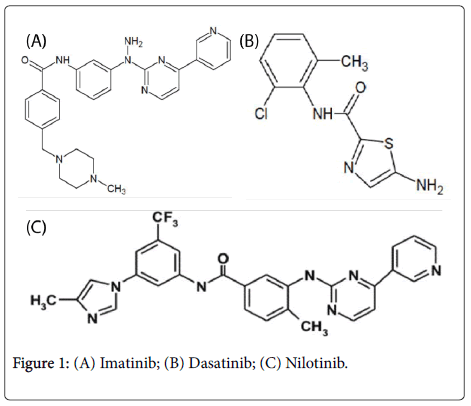 Tyrosinee kinase inhibitors inhibit cancer by competitive inhibition with the site of fixing of the ATP of Tyrosine kinase of the Bcr-Abl protein, the phosphorylation of the residues Tyrosine of proteins is blocked preventing the transduction of the signal related to Bcr-Abl. It results from it an inhibition from the proliferation and an induction of the apoptosis of the cellular lines carrying chromosome Philadelphia [5,6] (Figure 2). 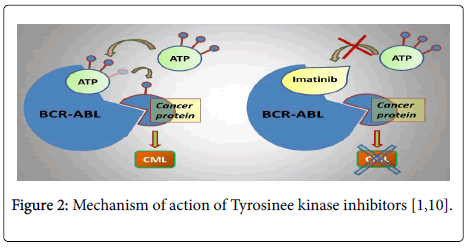 A descriptive and retrospective study was carried out on a series of thirty-three case (33) cancer patients followed in the service of hemato-oncology hospital Dorban CHU Annaba with a 45 years median age and two extremes from 17 to 72 years, during the time from the month of December 2013 to the month of April 2014. Information was collected on monitoring sheets of the patients and biological assessments, data analysis was made by using cards of investigations which were seized on Excel 2010 and expressed as a percentage, and averages.

All the treated cases (33) had a Chronic Myeloid Leukemia (CML) which accounted for 100% of the patients, 33 cases of cancer patients have been treated by the prescribed Tyrosine kinase inhibitors (TKI) either directly in first intention or in second intention after using a chemotherapy containing Hyroxyuree (Hydrea®), The protocol varies according to the stage of CML. Several therapeutic protocols were prescribed; various TKI could be prescribed for certain patients; but often in monotherapy, The TKI which have been prescribed are: Imatinib (Imatib® and Glivec®), Dasatinib (Sprycel®), Nilotinib (Tasigna®).

We have distributes the undesirable and toxic effects of each TKI in three classes according to the data of published reviews:

• The specific undesirable effects for the TKI.

In this series of thirty-three (33) cases, all the treated cancer patients had CML, which accounted for 100% of the cases, the frequency of each sex was almost half of the total manpower of our series, the age bracket of the adult patients was the prevalent slice with a median age of 45 years and two extremes 17 years and 72 years. Almost half of the patients were inhabitants of the Wilaya of Annaba with a frequency of 42%; which is located in the extreme North-East of Algeria; this is explained by the accessibility of these patients to the service located on the same Wilaya Annaba in Algeria.

We deduced that hematologic disorders (anemia, thrombosis, etc) and the infections were the most prevalent antecedents in our study, this can be explained by the nature of treated cancer CML which accounted for 100% of our patients and what was the principal indication of the TKI. We noted four (4) cases with genetic factors carrying positive Philadelphia Chromosome (Ph+) and an old case 50 years presenting professional exposure as a carcinogenic factor; this case was strongly exposed during its work close to an industrial area in Skikda-Algeria during years.

The anti-gouty medication have been prescribed as symptomatic treatment with a frequency of 35%, then the anti-acids (13%), then the anti-hypertenseurs and the coagulants in third position (11%), this difference in frequencies is dependent on nature and the frequency on the noted undesirable effects. 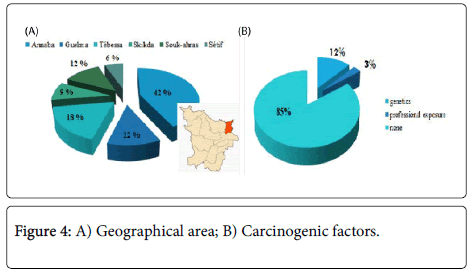 According to the got results, unemployment represented half of the total manpower with a frequency of 54%; stress pulled by this situation could be regarded as a factor predisposing to cancer, which is added to the other noted carcinogenic factors (the genetic factor) and (the professional exposure) [8].

The study of the tolerance showed that the frequency of the common undesirable effects (related to previous chemotherapy) was very high (91.30%) for the patients having received Imatinib (Imatib®), this is explained by the fact that the frequency of the patients having received a chemotherapy containing Hydroxyurée (hydrea®) in first intention before the TKI is higher for this group (54%). Imatinib (Glivec®) gave only one case presenting of the complications like colopathy and respiratory allergy; with disappearance of the osseous pains and the arterial hypertension obtained with Imatinib(Imatib®) ; this confirms the tolerance of the speciality of Glivec® compared to the speciality Imatib® [4,7].

We did not note any complication (cumulative undesirable effect) with Dasatinib(Sprycel®) and Nilotinib (Tasigna®), with reduction in the specific effects (osseous pains and myalgias), reduction in the asthenia; this testifies to a better tolerance of the new Tyrosine Kinase inhibitors compared to the molecule of reference Imatinib (Imatib® or Glivec®) [4,7]. 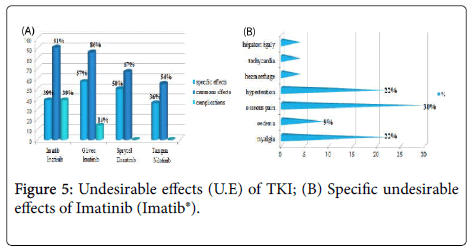 We noted a good specificity of the undesirable effects of each TKI such as: osseous pains 30%, arterial hypertension 22%, an oedema (syndrome hand-foot) 9% for Imatinib(Imatib®), and anemia with 18% for Nilotinib(Tasigna®). Inspide of a limited manpower, the results got concerning nature and the frequency of the undesirable and toxic effects are well correlated with those announced in the reviews of literature [8,9]. 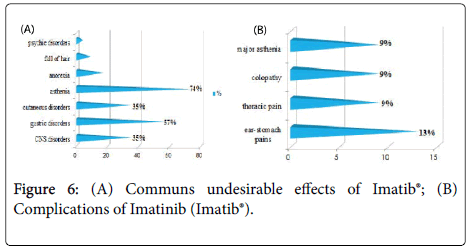 Figure 6: (A) Communs undesirable effects of Imatib®; (B) Complications of Imatinib (Imatib®). 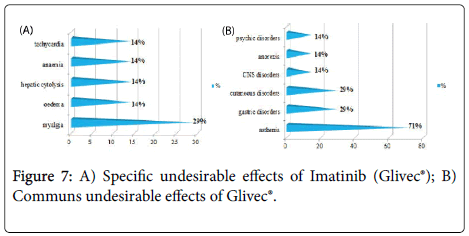 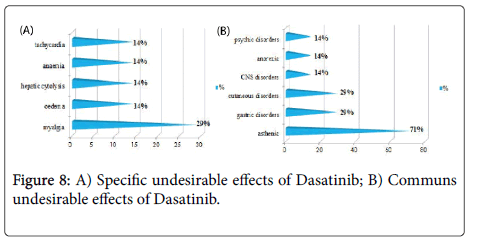 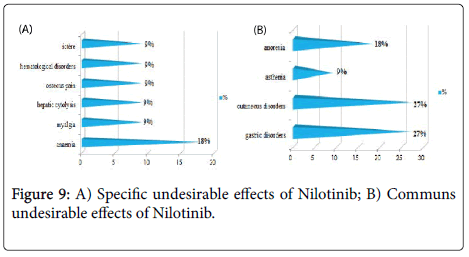 Glivec® and Imatib® are two certified copies or biosimilar of the same medication Imatinib, presenting the same non-proprietary international name (D.C.I), and the same principal active and excipients, the same chemical structure, the same mode of action, but they are manufactured by two different laboratories, therefore the price of Imatib® is less expensive than Glivec®, they are imported both from other countries and not produced in Algeria. The expected undesirable effects are the same ones theoretically, but they are practically different, this is explained by the inter-individual differences metabolic between the patients, which was practically proven in our study [8,11,12].

According to the got results, we noted the tolerance of the speciality of Glivec® compared to Imatib® and a better tolerance of the new Tyrosine Kinase Inhibitors Dasatinib and Nilotinib compared to the molecule of reference Imatinib (Imatib® and Glivec®). Through these data we raise the interest of selection of the therapeutic protocols and the importance of a strict monitoring of the undesirable and toxic effects of targeted therapy [13]. We underline the role of the responsible authorities of health which must encourage the production of expensive medication, in order to improve the dispensation of new targeted therapy, which makes it possible to ensure the best taken in charge of the cancer patients.

Copyright: © 2015 Soudani W, et al. This is an open-access article distributed under the terms of the Creative Commons Attribution License, which permits unrestricted use, distribution, and reproduction in any medium, provided the original author and source are credited.