Copyright: © 2016 Moaaz A, et al. This is an open-access article distributed under the terms of the Creative Commons Attribution License, which permits unrestricted use, distribution, and reproduction in any medium, provided the original author and source are credited.

Aim: To determine the long term patient disability scores, patient satisfaction and their correlation after trapeziectomy with partial Flexor Carpi Radialis (FCR) tendon transfer and interposition. Method: A cross-sectional analytic study of 182 patients was under taken from 1993 to 2008 of all trapezectomies performed by one surgeon. A participation acceptance letter, consent, a DASH Score and patient satisfaction scale letter were sent to all patients. Medical records were thoroughly reviewed, and data collection was gathered, analyzed and reported. Results: We had a sixty seven percent reply rate, with patients scoring an average DASH of 21.5. Average satisfaction score was 8.78. Patients scoring a DASH score of >40 were also reporting other upper limb pathologies. Conclusion: Satisfaction and disability trends improved with time. High DASH scores did not always correlate with patient satisfaction score. The DASH does not measure patient satisfaction, which is an important, but difficult measure of the clinical outcome.

The first carpometacarpal joint (CMCJ) is a highly functioning joint, which is used in any daily routine repeatedly, not surprisingly, degenerative osteoarthritis affects a high number of patients after the age of 75 [1]. The disability from stiffness and pain that follows makes this joint a common site for surgical intervention. Non-operative management with NSAIDS, splinting and sometimes corticosteroid injections is usually the first line management. Surgery usually follows after failed non-operative management, with numerous surgical variations and techniques developed [2]. These include arthrodesis [3], trapezial excision alone [4,5], trapezial excision with Ligament Reconstruction and Tendon Interposition (LRTI) using [FCR [6], Abductor Pollicis Longus [7,8]], silicone arthroplasty [9,10], acellular dermal allograft [11], Darcon interposition [12] and total joint implant arthroplasty [13]. Understating the anatomy and pathophysiology of CMCJ is a key to the surgical management of the diseased joint.

The CMCJ, a saddle joint, is a semi constrained and incongruent joint, where the saddle is the trapezium and the first metacarpal the rider. Surrounded and held with five ligaments and nine muscles to obtain further stability, it can achieve complex movement from four basic planes of motion, flexion and extension, adduction and abduction [14]. Such movements include opposition, palmar and radial abduction, palmar and radial adduction, and circumduction. A static restrain to the joint, is provided by the anterior oblique ligament (also called palmar or beak ligament), which attaches from the palmar tubercle of the trapezium and inserts on metacarpal base, at the ulnar articular margin [15]. Its complexity is increase by four articulations which included trapeziometacarpal, trapeziotrapezoid, scaphotrapezial and trapezium-index metacarpal each a potential site for disease and pain. The pathophysiology of base of thumb osteoarthritis is multifactorial; however the main postulated cause is the weakening of the palmar beak ligament, causing an increased translation of the metacarpal on the trapezium. This in turn changes the shear stresses in the joint, leading to accelerated cartilage wear [16,17].

Patients who underwent a trapeziectomy with LRTI were identified from a medical data base of a single high volume surgeon. Surgery is performed under GA and application of tourniquet. Affected limb is prepped with antiseptic solution and drapped. A zigzag incision is made over the anatomical snuff box, identifying and protecting the dorsal branch of radial nerve throughout the procedure. Trapezium is excised in a piecemeal fashion protecting FCR tendon (Figure 1). Radial half of FCR is used for reconstruction and remaining tendon bunched up into anchovy using 3/0 vicryl (Figure 2). Stability is assessed on table. Torniquet is then released and haemostasis assessed and secured. Local anesthetic is then infiltrated and skin edges loosely closed with 4/0 Prolene. A bulky padded dressing with thumb spica is applied. Patient is reviewed in outpatients two weeks later, wound assessed and scaphoid cast applied for another 4 weeks. At six weeks mark, cast is removed and custom made removable splint applied. 182 patients were found to have had the surgery between 1993 and 2008. A study package was prepared that contained a participation acceptance letter with a consent, a DASH Score and scale of satisfaction letter. Medical records were systematically reviewed, and data collection was performed. The DASH score included a work DASH and a sport DASH. The scale of satisfaction was a simple and comprehensible grading system to reflect on patient satisfaction, irrespective of the clinical outcomes. It constituted of a 1 to 10 grade visual graph, which need to be marked by the patient, one being completely dissatisfied, whilst 10 was complete satisfaction.

The data was analyzed and standard statistical protocol was applied to the results, which were presented at a state meeting.

We identified 182 potential patients from the above mentioned time frame. Sixty patients did not reply to our package, and were contacted personally. Of the sixty patients, two have died, eleven changed address and were not contactable, forty seven refused to participate in the study. 122 patients replied with 124 operations (two bilateral). In our population, we had 74% females, with an age average of 66 years (Male 67; Female 66) and a range 49 to 86 years. Right side was the predominant side of operation, 55%. Our average time frame since the surgery was 52.5 months, with a range 7 to 144 months. Average DASH score was 21.5, with a range 0-78. Average Work DASH score was 16.1, with a range 0-100. Average Sport DASH score was 18.1, with a range 0-87.5. The patient satisfaction scale showed an average satisfaction score of 8.78 out of 10, with a range 1 to 10.

Patient satisfaction plays a major role in surgeons practice. As surgeons we want to achieve the best possible results for our patients, and explore the need for an objective scoring system, like the DASH, that can guide us, in the right direction, to modify our techniques and management (Figure 3). Unfortunately, this can be difficult as our scoring systems do not take into account the subjective report of our patient. Our study demonstrates that even though some high DASH scores were scored by patients, it did not necessarily mean they were dissatisfied with the outcome, meaning that higher DASH scores did not affect some patients’ satisfaction score. Our DASH scores are comparable to the literature, which validates that trapeziectomy with ligament reconstruction and tendon interposition is an excellent surgical option for patients with CMCJ osteoarthritis [18,19 ]. 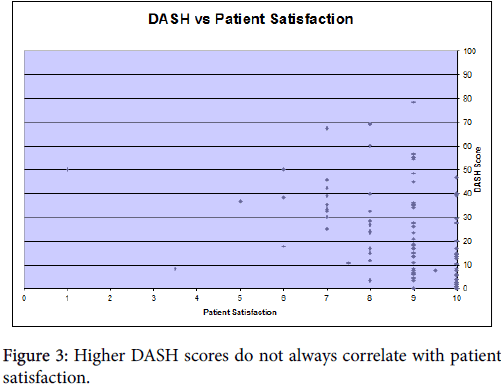 In another Level 1 study by Spekreijse et al. [21], showed improved function, strength and satisfaction obtained at 1 year post Trapeziectomy & LRTI with or without bone tunnel for stage IV Trapeziometacarpel OA and was maintained at 5 year follow up.

Camus et al. [22] looked at 47cases of Trapeziectomy & LRTI with a five year follow up evaluating using a functional score, including pain, professional and domestic activities and leisure involving the hand. Objective data were also assessed. They found that Trapeziectomy with LRTI yields good and stable long term results.

With time we noticed a higher satisfaction score and an improved DASH (Figures 4 and 5). Our patients had a 95% chance of having a satisfaction score of >7. Out of eighteen patients with high DASH scores >40, twelve reported other upper limb pathologies and one had spine issues. 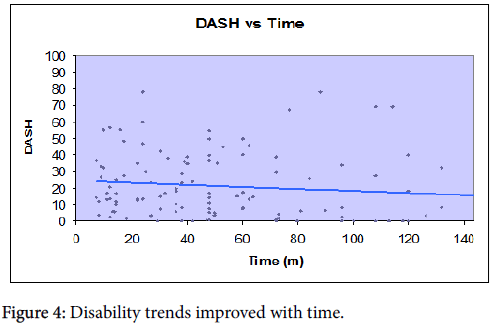 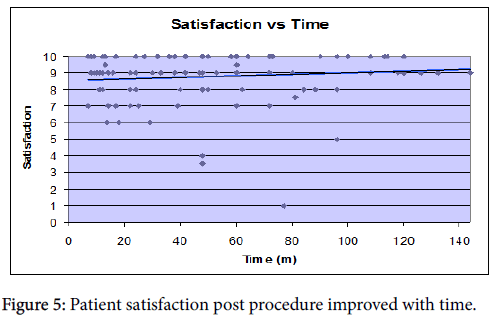 As mentioned above, satisfaction and disability trends improved with time. Higher DASH scores did not always correlate with patient satisfaction (Figure 1). Various studies have tried to evaluate long term outcomes for patients undergoing Trapezectomy and LRTI using various techniques. On the whole they concluded that patients who underwent LRTI were more likely to consider surgery again if need be even with higher DASH scores [23]. Prospective RCT’s with additional hand function measurement scores [24] can be employed in addition to DASH to further evaluate the effectiveness of the procedure and the longevity of results.