Treatment of Arsenic Toxicity during APML Treatment in a Pediatric Patient

Initial management goals are decontamination and hemodynamic stabilization. The case presentation shows the process of treatment for arsenic toxicity in a 17-year-old patient. Hemodialysis can be used as a treatment for toxicity, if chelation is not an option. Here it shows the description of arsenic toxicity and hemodialysis. Here the patient suffers from Acute Promyelocytic Leukemia, which later leads to cancer and its different symptoms.

Our patient was a previously healthy 17-year-old female who presented with a history of sub-acute bleeding and bruising complaints. One month prior, the patient noticed diffuse bruising and bleeding from the gums while brushing teeth. On the morning of presentation, she fell and developed altered mental status. She was brought to the hospital and was found to have significant hematological abnormalities, including anemia and thrombocytopenia, prolonged Prothrombin Time (PT) and Activated Partial Thromboplastin (aPTT), and evidence of Disseminated Intravascular Coagulation (DIC). A non-contrast head computerized tomography showed a left temporal intra-parenchymal bleed. Her pulmonary findings were consistent with possible pulmonary hemorrhage. She was intubated at Shock Trauma Center for airway protection.

On hospital day two, a peripheral blood smear was noted to have hyper granular pro-myelocytes with Auer rods, consistent with Acute Promyelocytic Leukemia (APML). She was immediately started on induction chemotherapy for COG (Cancer Oncology Group) AAML 1331 high risk protocol, with all-trans retinoic acid, arsenic, idarubicin and dexamethasone. Arsenic was to be given daily for a minimum of 28 days. Confirmatory bone marrow biopsy was deferred secondary to significant coagulopathy. This was well tolerated, however, she developed progressive hypoxemic respiratory failure and progressive multiorgan dysfunction (coagulopathy, acute kidney injury, altered mental status) and cannulated onto Veno-Venous Extracorporeal Membrane Oxygenation (VV-ECMO) via percutaneous placement of a left femoral venous drainage catheter and a right internal jugular catheter. Her coagulation profile was normalized by HD 7, with resolution of DIC. ECMO support was discontinued on HD12, with mechanical ventilation and CVVHDF continuing until HD16. No liver dysfunction was noted.

After decannulation from VV- ECMO, she was subsequently taken off CVVHDF and extubated. The patient had some evidence of kidney injury with creatinine trough of 2.4 mg/dL, but at this time, hemodialysis was held despite oliguria. Two days later, HD 18 after discontinuation of CVVHDF, she developed acute worsening of mentation, emesis, diarrhea, tachycardia (180 bpm), fever (40.2°C), and worsening of acute kidney injury with creatine increasing to 9.58 mg/dL. The patient was neutropenic at this time and was thought to have severe sepsis. She was subsequently placed on empiric broad spectrum antibiotics and antifungals. Infectious workup was negative. Along with profound tachycardia, the QTc was significantly prolonged to 582. She received hemodialysis on HD(s) 18, 19, 22, 28, 30, and 32. There was concern for arsenic poisoning due to arsenic trioxide therapy, and an arsenic blood arsenic level was drawn. There was significant delay in returning results as those labs are performed at outside, governmental laboratories. The initial arsenic level, on HD 18 was found to be 378 ug/L (normal range 2-23 μg/L). A level drawn after hemodialysis on HD 18 was 255 μg/L and demonstrated a 33% decrease. Urine arsenic levels were unavailable. She had subsequent decrease in arsenic levels over the following 12 days. The patient was receiving 0.15 mg/kg (13 mg) per day of IV arsenic trioxide from HD(s) 2-18. The subsequent doses were 0.115 mg/kg (10 mg). The following doses were on HD(s) 22, 41-46, 48-51 and 55-57.

Arsenic toxicity is known to fever, tachycardia, waxing and confusion.During this time, the patient developed alopecia, hyperpigmentation of the palms and soles, keratosis in her nails-all of which were understood to be attributed to chronic arsenic poisoning retrospectively.

She was transitioned to hemodialysis from CVVHDF as the method to arsenic removal.

Arsenic trioxide therapy was held and chelation was not preformed. Over several days, the patient had notable improvement in tachycardia, QTc prolongation, fever, and confusion. The patient’s intrinsic renal function also began to improve as noted by urine output of 0.5 mL/kg/hour.

Despite arsenic toxicity, the patient’s cancer was noted to be in remission prior to discharge. The patient completed her APML treatment in the following year and has been in remission since.

Heavy metals are found throughout the environment and are nonbiodegradable. Heavy metal toxicity is shown to impact multiple organ systems.

The most abundant metals are lead, mercury, and cadmium, and arsenic which all have high degrees of toxicities [1]. Arsenic exposure predominately occurs through drinking water, air, food, occupation, and other environmental sources [2]. Although considered a poison, arsenic is frequently used in patients with APML due to its therapeutic efficacy.

Arsenic Trioxide (AS2O3) is cons idered one of the most effective anticancer agents with its mechanism of degrading the fusion Protein Promyelocytic Leukemia (PML), Retinoic Acid Receptors (RAR) alpha.

Arsenic causes formation of reactive oxygen species and depletion of GSH in cells. It also causes direct damage to DNA and RNA as well as apoptosis in cells through multiple mechanisms after exposure to arsenic. Arsenic also has anti-angiogenesis effects which reduces new vessel formation. The liver metabolizes arsenic, and it is then excreted into urine [3].

Arsenic toxicity is dependent on its oxidation state and chemical structure. Different arsenic metabolites have different toxicities, and the extent of the toxicity depends on the animal species, cell types, and the uptake rate of the metabolite.

Figure 1 shows the metabolism pathway of arsenic in the body. Both Monomethylarsonic Acid (MMA) and Dimethylarsinic Acid (DMA) are active metabolites of arsenic [3]. 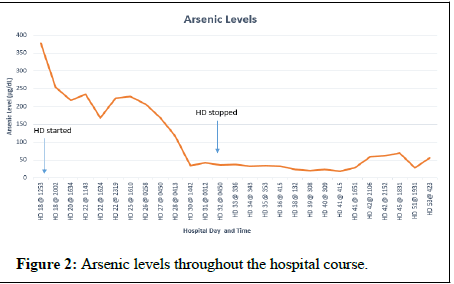 Arsenic exposure causes alternations in neurological function, and Figure 2 describes the different mechanisms of arsenic toxicity [3]. skin lesions in the form of melanosis, keratosis, and leucokeratosis and hyperkeratosis. The trivalent species have been found to cause diabetes mellitus through inhibition of insulin dependent glucose uptake in cells [4]. Cardiovascular disease is mediated through generation of reactive oxygen species and nitric oxide which up regulate inflammatory mediators causing endothelial dysfunction which can lead to atherosclerosis. In the liver, arsenic exposure can cause hepatomegaly, hepatic fibrosis, and cirrhosis due to oxidative stress and up regulation of pro-apoptotic proteins [3]. Because of the excretion of MMA/DMA and 15% of unchanged arsenic are excreted in the urine, these metabolites can cause nephrotoxicity in patients with renal dysfunction [5]. Because of these toxicities, patients of arsenic therapy should have their QTc monitored, liver function tests, and renal function checked frequently. Even though arsenic is used for treatment of APML, it is a carcinogenic molecule which damages DNA; changes methylation patterns, stimulates angiogenesis, deregulates the cell cycle, and blocks physiologic apoptosis. According to the CDC, stomach decontamination and hemodynamic stabilization are initial management goals for acute toxicity. Chelating agents can be used to aid absorption of arsenic. If acute renal insufficiency develops, hemodialysis may be used for the treatment of arsenic toxicity or if chelation is not an option [6]. Our patient did have some evidence of acute kidney injury as seen with an elevation in her serum creatinine from admission; however, this was likely due to her high disease burden. The acute renal injury may have contributed to her arsenic toxicity as seen by prolonged QTc and elevated arsenic levels. The acute renal injury report is the youngest patient to receive hemodialysis for the treatment of acute arsenic toxicity in the literature who was not hemodialysis dependent. In hemodialysis, therapy was helpful with calculated removal of 38% of arsenic in an 81-year-old hemodialysis dependent with relapsed APML receiving 10 mg of arsenic trioxide for post hemodialysis sessions [7]. This is also similar to the removal of 40% of arsenic in a 73-year-old hemodialysis dependent with relapsed APML [8]. This is consistent with the amount of arsenic removed in our patient after her hemodialysis session with a level of 387 μg/L to 255 μg/L which was a 33% decrease. Our case represents one of the highest arsenic levels recorded for acute arsenic toxicity in the setting of APML treatment. 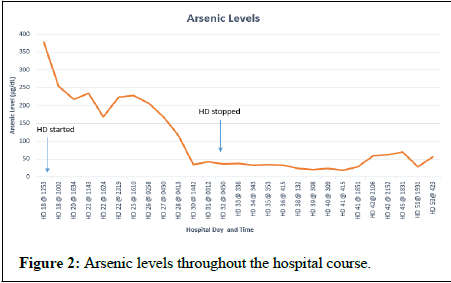 Literature suggests that routine arsenic levels are not needed and toxicity should be monitored based on clinical symptoms such as QTc prolongation, hepatic dysfunction, electrolyte imbalance, fluid overload, and cytopenia [9]. However in our patient, it was important to use arsenic levels and monitoring of clinical symptoms to determine when it might be safe to give patient additional arsenic doses after hospital day 18 as well as closely monitoring the patient’s renal function.

Copyright: © 2021 Patel R, et al. This is an open-access article distributed under the terms of the Creative Commons Attribution License, which permits unrestricted use, distribution, and reproduction in any medium, provided the original author and source are credited. 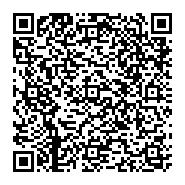