Two much Pain: A Patient with Painful Diabetic Neuropathy and Post Herpetic Neuralgia, a Case Report and Review

Copyright: © 2016 Tan GLC, et al. This is an open-access article distributed under the terms of the Creative Commons Attribution License, which permits unrestricted use, distribution, and reproduction in any medium, provided the original author and source are credited.

Contemporary data indicates that the prevalence of diabetes mellitus will increase by year 2030, where up to 50% develop neuropathy, and about a quarter will develop neuropathic pain. The purported immunocompromised diabetic state makes them also susceptible to various infections, for instance, herpes zoster infection. Presented in this report is a case of a 63 year old Filipino with painful diabetic neuropathy and who subsequently developed post herpetic neuralgia. A pain regimen with pregabalin initially at 150 mg/day ultimately reaching 600 mg/day reduced pains, but needed an augmentation with lidocaine patch (5%) application, and tramadol plus paracetamol fixed dose combination as rescue medication, for better control.

Neuropathic pain is defined as “pain arising as a direct consequence of a lesion or disease affecting the somatosensory system” [1]. This can be caused by primary lesions in the central nervous system (e.g. stroke, multiple sclerosis, spinal cord injury or trauma) and peripheral nervous system (e.g. diabetes mellitus [DM], toxins, injuries and varicella-zoster infections and HIV). The clinical positive symptoms would include spontaneous pain, paresthesias and dysesthesia (hyperalgesia and allodynia), while the negative symptoms would include hypoesthesia, weakness and loss of balance. While hard to estimate, painful diabetic neuropathy (PDN) may occur in up to 25% of patients with DM [2], and that DM is associated with an increased risk of persistent post-herperic neuralgia (PHN) [3].

The patient is a 63 year old male, Filipino, diagnosed with type 2 DM 12 years ago. He came in complaining of moderate to severe (7-8/10 VAS) spontaneous pricking pains over both feet for the past 4 months. He noted that the pains would also appear when he walked and when his feet touched the cold floor. Eventually, there was noted accompanying numbness that involved not only both his feet but also both of his hands. Although he claimed that he had fairly good glycemic control (latest regimen: diet, exercise, sitagliptin/metformin 5/500 mg/ tab 1 tab BID and gliclazide 60 mg/tab 1 tab OD) with an HbA1c 6.1%, his pains continued causing impaired sleep, anxiety symptoms and recurrent work absenteeism.

In the last 6 months, he developed varicella zoster lesions located on the right T9-12 dermatome levels accompanied by persistent stabbing pains (VAS 7/10) 2 months after. The pain would also appear every time cloth would touch the affected body parts.

Likewise, he had a Body Mass Index (BMI) of 40, and a known dyslipidemic on treatment with a statin. He had no previous varicella zoster vaccinations [4]. He is negative for HIV and there is no intake of medications that could cause neuropathies (e.g. colchicine, amiodarone and isoniazid, among others). Family history is likewise unremarkable for any neuromuscular diseases.

As part of his past medical history, he was given from elsewhere, a regimen for his PDN with Vitamin B1,6,12 and naproxen (usually prescribed for nociceptive pain). Despite 2 months into the regimen, these did not alleviate his PDN pains.

He was previously given a diagnosis of “claudication” because the pain was noted more upon ambulation. However, the dorsalis pedis pulses and ankle-brachial index (1-score on test) were normal. Upon further history taking and examination, it was noted to be because of mechanical allodynia (i.e. pain occurring on movement).

On neurologic examination, his cognitive status was normal and there were no cranial nerve deficits. Motor examinations did not show any atrophy, fasciculations and ataxia. He was able to ambulate well, including a good toe and heel walking. Deep tendon reflexes were symmetric and graded +2 in all extremities. Sensory examination was normal for testable modalities (pinprick, light touch, monofilament and position/vibration senses focusing on distal limbs (especially the big toe). However, he had allodynia upon cotton and cold application mainly over the edges of his shingle-affected areas over the right T9-12 dermatomes.

Routine Nerve Conductions Studies (NCS) revealed normal latencies, conduction velocities and amplitudes of evoked motor and sensory nerves (including emphasis over the sural and superficial fibular nerves). The late response studies (i.e. F-waves and tibial Hreflexes) were likewise normal and side-side comparable. The electrophysiologic Sympathetic Skin Response (SSR) was absent on the lower limbs but could be elicited on the upper limbs (Figure 1). 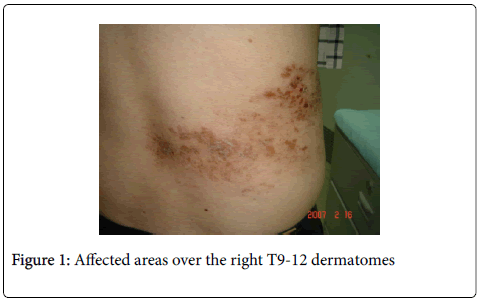 The patient was initially started on pregabalin at 150 mg/day which was slowly titrated up to 600 mg/day in 3 weeks. The PDN improved with VAS reduced to 2/10. Because of the PHN, the treatment eventually needed an augmented therapy with lidocaine patch (5%) applied 12 hours per day plus rescue medication of tramadol + paracetamol combination. With these multi-modal medications, there was an over-all noted 70% pain reduction and patient was able to sleep better, feel better and return to work more effectively.

Patient informed consent was secured as well as Ethics approval.

Diabetic polyneuropathy is one of the most common long-term complications of DM. Most patients would present with distal symmetrical polyneuropathy usually starting over the feet and gradually ascending towards the hands. For both types 1 and 2 DM, the risk of developing distal polyneuropathies – including painful neuropathies – appears to be inversely related to the degree of glycemic control and is directly correlated with the duration of diabetes [5]. Diagnosis of diabetic neuropathy is mainly clinic-based, and neurophysiologic tests may be applied where doubts exist (e.g. asymmetric presentation, motor weakness and atrophy “red flags”) [6]. Routine NCS findings may yield normal findings in those with PDN that may start off with small nerve fiber involvement. NCS is a reliable test for large fiber neuropathies. In the instances where NCS are normal, Quantitative Sensory testing, epidermal nerve fiber densities obtained from skin biopsies, confocal retinal microscopy and Laser evoked potential studies, will nowadays, provide documentation.

In this present case, the routine NCS was not helpful, and not unexpected in a patient with good tendon reflexes and proprioceptive tests. The SSR, an autonomic test, may serve as a surrogate test for small nerve fiber neuropathy, especially if absent in the lower limbs (a case in point for symmetric, length-dependent diabetic neuropathy). While clinically ruled out in this present case, one has to be aware of differentials in small nerve fiber neuropathy that include the following: Metabolic Disorders (e.g. Porphyria and Fabry’s disease); Infiltrative/ Immune (e.g. Lupus, HIV, Lyme’s disease and Amyloidosis); and Toxins/Drugs (e.g. Heavy metals, Metronidazole, Nitrofurantoin, isoniazid and anti-cancer drugs). These differential diagnoses were ruled out in this present case, with thorough history taking, physical and neurologic examination and basic laboratory examinations.

Diagnosis, management and practice parameters for HZ and PHN have been systematically done in the past [7-10]. In regard to DM and PHN, despite common knowledge that optimum glucose control is sought, new studies show that enhanced glucose control may impact more in patients with type 1 diabetes than those with type 2 DM [11,12].

DM patients are more susceptible to viral infections which may be of increased severity than in more immunocompetent subjects. Some measures of cell-mediated immunity are depressed in individuals with DM (for example T cell dysregulation, characteristic in DM, might result in an increased incidence of HZ [3]. In one study [13], the cell mediated immunity towards HZ virus among patients with and without DM was analysed through the gamma-interferon ELISPOT assay. Even though the study did not show any significant differences, it was observed that the ELISPOT count was lower for those with DM than the healthy subjects in age matched groups [13].

Guingard’s group [4] estimated that the crude incidence of HZ infection was higher among type 2 (4.59 per 1,000 person years) than type 1 DM (2.13 per 1,000 person years). The magnitude of the risk is associated with the patient’s age (≤65 years old) and presence of comorbid factors such as (cardiac and chronic pulmonary disease). Another group [3] identified 4,20,515 cases of HZ (approximately 88 million person years). Individuals with DM represented 8.7% of the person years they analysed, accounting for 14.5% of the patients with HZ infection. Their incidence of HZ was higher (78%) in DM, and DM was associated with a 45% adjusted risk of HZ. They also found higher rates of PHN in individuals with DM than those without, and that DM was associated with an 18% adjusted risk of persistent PHN [3].

Hyperglycemia was found to be a predictor for PHN in another study [14]. Although they had a small DM population, it is of note that 4 out of 7 (57.14%) DM patients developed PHN, compared to healthy subjects (15.55%).

Adequate pain control is one of the goals of therapy since pain is the most debilitating symptom of PDN and PHN. There are multiple medications used to treat these pain syndromes and a pain practitioner must properly weigh the medication’s safety, efficacy, cost and side effect profile against the patient’s general data, tolerability and status. For example, antidepressants may be given to patients who develop symptoms of depression; medications will also depend on patient’s comorbidities, like cardiac-hepato-renal impairments with multiple drug regimens on board [15].

Just as applied in this present case, pregabalin, unlike gabapentin (another alpha-2 delta ligand), was the first choice for treatment in PDN [16] and it belongs to the tier of first line treatments derived from multiple guidelines [15-17]. The common adverse effects of pregabalin include somnolence, dizziness, peripheral edema and weight gain. While pregabalin dose of 150 mg/day in two divided doses is recommended as initial therapy, slowly augmenting the dose to 600 mg/day will achieve better efficacy, gleaned from this present case. Algorithms for treatment of PDN would start with optimum glycemic control, and first line treatment with anticonvulsant medications (gabapentin and pregabalin) or antidepressants (duloxetine and tricyclic antidepressants). If these treatments deem inadequate for proper control, second line agents (oxycodone, tramadol, topicals and sodium channel blockers) or combination therapies may be used.

Contemporary pooled studies, algorithms and guidelines also indicate that multimodal therapies in peripheral neuropathic pain may be beneficial [15-17], and to which may hold true with the additional use of lidocaine patch and opiates in PHN. Topical medications provide lower side effect profiles and are useful for patients who are unable to tolerate oral medications. Lidocaine is a voltage gated sodium channel antagonist and when applied on the dermis binds to the sodium channels on nociceptors preventing generation and conduction of neuronal action potentials, thereby reducing pain. Lidocaine patch (5%) is approved both in US and Europe for treatment of PHN and has few local side effects (ie. Erythema, rash, dermatitis, skin irritation and hypersensitivity reactions). According to Barbano et al. [18], up to four 5% lidocaine patches used for up to 18 h/day could significantly improve pain and quality of life for patients with PDN.

As was modelled in this present case, a randomised control study by Baron et al. [19] recruited patients with both PDN and PHN. A considerable proportion of patients could not be treated with monotherapy. These patients were then asked to take a combination of lidocaine patch and pregabalin. The addition of lidocaine patch provided better pain reduction. In addition, pregabalin could be titrated down to a lower dose, minimizing side effects. Use of oxycodone in combination with pregabalin has likewise been studied in PDN with PHN [20].

While we underscore the increased probability of PHN risk in patients with DM, the pain symptomatology may even pose the larger problem to a suffering patient with PDN. The clinician should be able to recognize the problem and not leave the patient to “live with pain.” The process of recognition, through application of validated screening tools, is key to a better care [21]. However, there are instances when the clinician’s acumen in this scenario may be a challenge, as communication gaps may exist between them and the patients [22] This was again exemplified in this present case wherein medications (Vitamin B 1,6,12 and anti-nociceptive medication), with unproven benefits in neuropathic pain, were initially given. In the end, “two” much of the pains the patient suffered, has been substantially controlled with rationale use of combination therapies.