Primary Adenocarcinoma of the Bulbomembranous Urethra: Cause or Coincidence?

Primary Adenocarcinoma of the Bulbomembranous Urethra: Cause or Coincidence?

A 73-year-old male patient was followed in our urology department after prostate cancer in 2004 and bladder cancer in 2011. In April 2013, during the last cystoscopy, a bulbomembranous stricture was found and an urethrotomy was easily performed. Shortly after the procedure, the patient starts complaining of urinary dysfunction and presents with a palpable firm mass in the perineum. An urethrocystoscopy was performed, showing no abnormalities. A pelvic CT-scan was then performed, revealing a complicated and large (6×7×4 cm) post-operative hematoma. After a trial of antibiotics, without any symptomatic improvement, a pelvic MRI showed a large heterogeneous mass, extending to the corporeal bodies and multiple enlarged inguinal and pelvic lymph nodes. He was than submitted to surgical exploration and the pathology report was consistent with primary urethral adenocarcinoma in both the perineum and the corporeal bodies. A new CT scan showed massive metastatic spread. He was proposed for chemotherapy but the prognosis is logically poor.

This case represents a rare condition affecting the urogenital tract, with poor survival and little evidence based medicine. Only a few reports are available in the literature, so no guidelines can be established in a linear fashion.

A 73-year-old male patient was followed in our urology department after radical prostatectomy for prostate cancer since 2004. He was also under cystoscopic control since 2011 due to bladder cancer. During the last cystoscopy, in April 2013, a bulbomembranous stricture was found, so an urethrotomy was easily performed with no immediate complications. However, shortly after the procedure, the patient starts complaining of urinary dysfunction, comprising hesitancy, poor stream, abdominal effort to urinate and pain to the perineum, which presented with a palpable firm mass.

Upon physical examination, a firm, irregular perineal mass was found with extension to the proximal corporeal bodies.

An urethrocystoscopy was performed, showing no abnormalities. A pelvic CT-scan (Figure 1) was performed, revealing a complicated and large (6×7×4 cm) post-operative hematoma. The report had no reference on the corporeal bodies. He was then started on antibiotics and anti- inflammatory drugs for a total of 4 weeks. Because there was no improvement after this course of treatment, and the mass grew larger, a pelvic MRI was performed. The MRI (Figures 2 and 3) showed a large heterogeneous mass, extending to the corporeal bodies, with cystic and solid components and multiple enlarged inguinal lymph nodes, including large necrotic pelvic lymph nodes.

Figure 1: CT-scan: A large and complicated (6×7×4 cm) post-operative hematoma. The arrow points to the perineal mass. 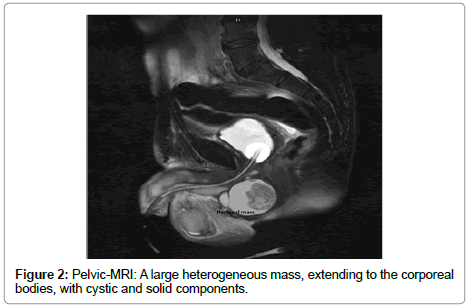 Figure 2: Pelvic-MRI: A large heterogeneous mass, extending to the corporeal bodies, with cystic and solid components. 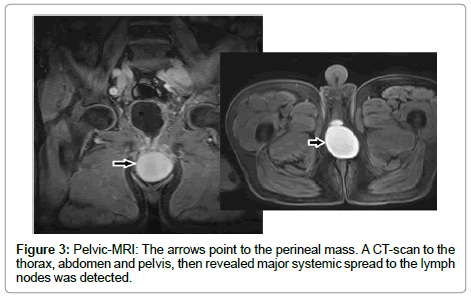 Figure 3: Pelvic-MRI: The arrows point to the perineal mass. A CT-scan to the thorax, abdomen and pelvis, then revealed major systemic spread to the lymph nodes was detected.

A CT-scan to the thorax, abdomen and pelvis, then revealed major systemic spread to the lymph nodes was detected.

He was subjected to surgical exploration of the perineum, with partial excision of the previously referred mass. A biopsy of the corporeal bodies was also performed at that time.

The pathology report showed a cystic mass positive for CK7; CK20; CDX-2, PAP, Vimentin Racemase, TTF-1, and S-100 protein on immunohistochemical study, which was consistent with a primary urethral mucinous adenocarcinoma, extending to both the perineum and the corporeal bodies.

After this result, and taking into account the generalized metastatic process, he was only proposed for systemic chemotherapy. An indwelling catheter was needed a few days later because of urinary retention. Despite having been started on chemotherapy, his condition is getting worse and prognosis is poor.

In males, primary carcinomas of the urethra most often appear in the bulbomembranous urethra (60%), while the ones occurring in the penile and prostatic urethra are less common (30 and 10%, respectively) [3].

In females, different reports on epidemiology suggest a trend to TCC as well. However, other authors refer a shared incidence with SCC [4].

The aetiology and pathogenesis in unknown, but for male primary UC various predisposing factors have been proposed, which include: urethral strictures, chronic urethritis following sexual transmitted diseases (namely HPV-16), radiation therapy and urethroplasty. In females, however, urethral diverticula and recurrent urinary infections are thought to be associated with tumour’s emergence. Congenital origin may also explain primary AC appearing in younger ages [5,6].

Some prognostic factors have been identified: tumour extension, location at diagnosis and nodal involvement seem to be the most important, as they might predict the amenability to surgical control and complete excision.

Other factors like tumour size, histology, advanced age and race could also have impact on prognosis [7-9]. When they become symptomatic, advanced disease is usually present. The diagnosis is often very difficult, if typical signs and symptoms are not present. Initial hematuria or bloody discharge is usually the signs in about two thirds of the cases. Other symptoms, including extra urethral mass (52%), bladder outlet obstruction (48%), pelvic pain (33%), urethrocutaneous fistula (10%) and low-flow priaprism by tumour infiltration to the corporeal bodies have also been reported [10].

Physical examination of the external genitalia with digital rectal exam, bi-manual palpation and inguinal inspection for lymph nodes should be done. Urethrocystoscopy with biopsy or even transurethral resection of visible lesions in the urethra or bladder enables histological assessment. MRI is best suited to define local extent and CT-scan is more accurate in defining metastatic disease to the abdomen and thorax. In contrast with penile cancer, all enlarged lymph nodes should be regarded as metastatic until proved otherwise (30% of the patients are metastatic at presentation) [11-14].

Treatment strategies depend on tumour extent and location, with surgery being the most accepted option when feasible. Prognosis is better for distal tumours, as it allows organ sparing surgery, often with transurethral resection, partial amputation or even distal urethrectomy. When proximal tumours are present and advanced disease is suspected, radical surgery with emasculation is usually performed, with an en bloc resection of the bladder, prostate, urethra along with the penis, scrotum, with or without inferior pubectomy when necessary [15].

Prophylactic bilateral inguinal or pelvic node lymphadenectomy is not advisable. However, it is standard when metastatic lymph nodes are suspected, and is complemented with chemotherapy when distal lymph node disease is present. Retrospective studies in advanced disease with preoperative chemotherapy, with or without radiotherapy before surgery, even with positive lymph nodes, reported good longterm survival, emphasising the need to complete the surgery after chemotherapy.

As only a few cases are described, and because of the lack of randomized trials, chemotherapy regimens are based on similar histological entities in other locations.

As a result, for TCC, MVAC (methotrexate, vinblastine, doxorubicin and cisplatin) and platinum based regimens are often used; although for SCC, similar regimens to penile cancer are the most common option. Because of its even lower incidence, chemotherapy regimens for AC, are sparse, but are usually cisplatin-based [16,17].

Given the low incidence of UC, no proven follow-up regimen has been established. Therefore an individual based-approach should be followed, with a more regular regimen accordingly to organ-sparing strategies [18,19].

• Primary urethral cancer is a rare disease with poor prognosis.

• A high degree of suspicion is necessary.

• The lack of randomized trials and valid guidelines makes its treatment an individual challenge.

• An effort should be made to disclose this topic in the urological community, especially by publishing any new data on this matter.

Copyright: © 2013 Pedro PJ, et al. This is an open-access article distributed under the terms of the Creative Commons Attribution License, which permits unrestricted use, distribution, and reproduction in any medium, provided the original author and source are credited.