Quantification of TUNEL Assay in Hippocampus of Diabetic Rats by MAT LAB: Comparison with Stereological Method

Quantification of immunostained sections is needed in order to reliably and accurately assesses the expression of cellular proteins in tissue. Here we describe a novel technique for quantification of TUNEL positive neurons in rat hippocampus. After uniform random sampling the slices were stained by TUNEL and counterstained by toluidine blue. Counting of TUNEL positive neurons performed by stereological method manually. The same sections were processed by MAT Lab software and the results compared together. The result showed there is no significant level of differences between the two methods (P<0.05). We believe merging image processing methods like MAT LAB and uniform random sampling facilitate the interpretation of study results.

One of the most efficient methods for detecting cell surface and intracellular changes is immune staining. This method is based on reaction between antibody and specific cellular elements. The antibodies are localized by use of horseradish peroxides (HRP) for enzyme-mediated immune detection, commonly referred to as immune peroxides labeling. These methods are widely used in basic and clinical diagnosis [1]. TUNEL assay is one the IHC method which is widely used to detect apoptotic or degenerated neurons. As mentioned above the target of antibodies in TUNEL is broken DNA [2]. Quantification of immune stained sections is needed in order to reliably and accurately assesses the expression of cellular proteins in tissue [3]. At present, most workers (clinicians and researchers) report the results based on surface of section in biased way or in rare cases may report according to unbiased stereological methods. Stereological methods involve two main steps namely: sampling and calculating (for instance counting the number of particles). The sampling is based on a systematic approach which gives equal chance to all interested objects. In counting, a frame (probe) is superimposed on the interested field [4]. The counting frame is composed of two accept and tow forbidden lines. The particle (s) (even immunoreactive) which hit forbidden lines would not be counted. All part of a section will be inspected by moving microscopic stage in X, Y and Z axes [4]. Although the counting of immune stained cells by stereological roles is precise, but it is time consuming. Using the software in image processing is demanding in science as well as in medicine. Hence we aimed to merge stereological sampling, systematic random sampling, with image processing by MAT LAB and compare it with stereological counting method.

This study was carried out on male Wistar rats (8 weeks, body weight 240–260 g, n=6 per group). All rats were maintained in animal house and allowed free access to drinking water and standard rodent diet. Experiments performed during the light period of cycle and conducted in accordance with Regional Committee of Ethic of Mashhad University of Medical Sciences (MUMS) complied with the regulations of the European Convention on Vertebrate Animals Protection [2005]. Diabetes mellitus type1 (T1D) was induced by a single intraperitoneal (IP) injection of STZ at a dose of 60 mg/kg dissolved in saline (control animals were injected with saline only). Four days after the STZ injection, FBG was determined in blood samples of tail veins by a digital glucometer (Bio name Swiss). In the end of eight weeks, the animals were anesthetized by chloroform. Then perfusion was done transcardially with 100 ml of saline followed by 200 ml of fixative containing 2% glutaraldehyde and 2% par formaldehyde in 0.1 M phosphate buffer (pH 7.4). The harvested brains were post-fixed in the same fixative for two weeks. Then the brain further processed through graded ethanol followed by xylene and paraffin. Serial coronal sections (thickness 10 μm) were made through the entire extent of hippocampus in left and right hemispheres using a microtome [5,6]. The sampling was done according to systematic random sampling as briefly:

1. 10-15 sections are needed to estimate the precise number with accuracy above 95%

Where NV is numerical density, a is surface of counting frame, h is height of dissector, ΣQ is the sum of TUNEL positive neurons and ΣP is the total numbers of frame (Figure 1). MAT LAB software (version7.8) was used for processing. The same sections used for stereological method were selected for quantification process. In contrast with stereological in which all part of sample should be inspected, in processing by software, only reacted fields of interest processed. First, different ranges of staining for reacted, normal and connective tissue were defined. We defined the intensity of damaged neurons80 ± 20, normal sample 199.6 ± 11.62, and connective tissue 223.2 ± 7.09. The intensity Profiles of reacted regions from sections of each group (10 sections per animal/group) were calculated.

All data are expressed as mean ± SD. Statistical comparison between two groups was made using Student t-test. Statistically significant difference was accepted at the p<0.05 level 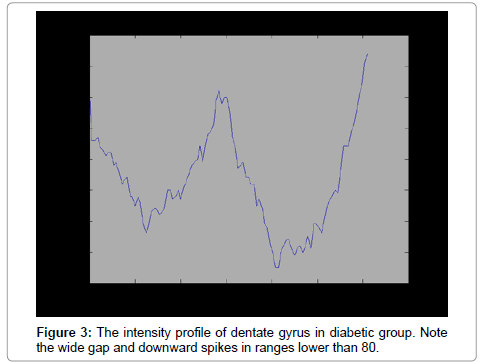 Figure 3: The intensity profile of dentate gyrus in diabetic group. Note the wide gap and downward spikes in ranges lower than 80. 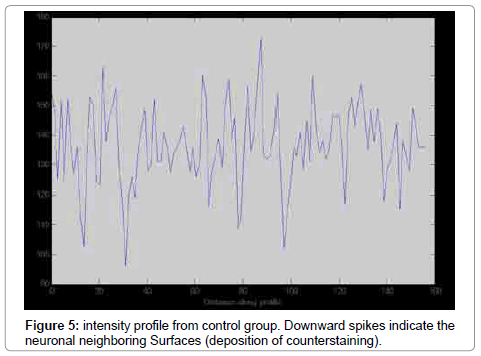 Stereology is based on geometry and probability theory. So sampling and calculating are based on probability and geometry respectively [8]. The results of counting by stereological method showed that neurodegeneration rate is high in diabetic group. The results of processing by software also showed that in diabetic group the extent of degeneration is high. It seems merging of systematic random sampling (SRS) and image processing by MAT LAB provides reliable results. In fact in this method, the severity of damage is being reported and given an overall view of degeneration. In our previous study we used the stereological method to report the number of injured or reactive neurons [7]. In spite of high accuracy, but the stereological counting procedure needed a lot time. Although our present work may be simple but it has some advantages such as reliable sampling method. In conclusion we think it needs a more widely standardization to obtain intensity profile form cellular and connective tissue in different paradigms.

Copyright: © 2012 Ahmadpour S, et al. This is an open-access article distributed under the terms of the Creative Commons Attribution License, which permits unrestricted use, distribution, and reproduction in any medium, provided the original author and source are credited.