Copyright: © 2011 Reddy YR, et al. This is an open-access article distributed under the terms of the Creative Commons Attribution License, which permits unrestricted use, distribution, and reproduction in any medium, provided the original author and source are credited.

Sumatriptan succinate (SS) is a selective 5-hydroxytryptamine (5-HT) receptor subtype agonist. Chemically it is known as 3-[2-(dimethylamino) ethyl]-N-methyl-indole-5-methanesulfonamide succinate (1:1). The empirical formula is C14H21N3O2S•C4H6O4, representing a molecular weight of 413.5. It is indicated for indicated for the acute treatment of migraine attacks with or without aura in adults.

Naproxen sodium (NS) is a member of arylacetic acid group of nonsteroidal anti-inflammatory drugs (NSAIDS). Chemically it is (S)-6-methoxy-α-methyl-2-naphthaleneacetic acid, sodium salt. The empirical formula is C14H13NaO3, representing a molecular weight of 252.23.

A tablet formulation containing 85 mg of Sumatriptan succinate and 500 mg of Naproxen sodium has recently been approved for the acute treatment of migraine. The combination product was proved to have superior efficacy compared to its individual components for the acute treatment of migraine. Sumatriptan, work early in the migraine process at the trigeminovascular unit as agonists of the serotonin receptors (5-HT receptors) 1B and 1D. They block vasoconstriction and block transmission of signals to the trigeminal nucleus and thus prevent peripheral sensitization. The analgesic effect of Naproxen sodium helps relieve the headache, while the anti-inflammatory effect decreases the neurogenic inflammation in the trigeminal ganglion, thus preventing the development of central sensitization.

Hence, a rapid, accurate stability indicating UPLC method for the simultaneous determination of SS and NS from combined dosage form was developed and validated.

Standard solutions: A standard solution containing 68μg/mL-1 of SS and 400μg/mL-1 of NS were prepared by dissolving appropriate amount of SS and NS in diluent. All the solutions were covered with aluminium foil to prevent photolytic reaction until the time of analysis.

Method validation was performed as per ICH guidance [28-29] for simultaneous determination of SS and NS in the formulations. The following validation characteristics were addressed: linearity, detection limit, quantification limit, precision, accuracy and specificity.

Forced degradation studies were performed on SS and NS combined tablets to prove the stability indicating property of the method. The stress conditions employed for degradation study of SS and NS include light exposure [29], heat (105°C), acid hydrolysis (1 N HCl at 50°C), base hydrolysis (1N NaOH at 50°C), water hydrolysis at 50°C and oxidation (1% H2O2 at 30°C). For light studies, the monitoring period was 10 days whereas for heat, acid, base and water hydrolysis it was 48 h. Oxidation was carried out for 24h. Peak purity of the principal peak in the chromatogram of stressed samples of SS and NS tablets was checked using photo diode array detector.

Repeatability (intra-day): The precision of the assay method was evaluated by carrying out six independent assays of SS and NS (1.71 mg mL-1 of SS and 10.0 mg mL-1 of NS) test samples against qualified reference standard. The percentage of RSD of six assay values was calculated.

Intermediate precision (inter-day): Different analyst from the same laboratory evaluated the intermediate precision of the method. This was performed by assaying the six samples of SS and NS tablets against qualified reference standard. The percentage of RSD of six assay values was calculated.

Recovery of the assay method for SS and NS was established by three determinations of test sample using tablets at 50%, 100% and 150% of analyte concentration (1.71 mg mL-1 of SS and 10.0 mg mL-1 of NS). Each solution was injected trice (n=3) into HPLC system and the average peak area of S and NS peaks was calculated.

Limit of Detection (LOD) and Limit of Quantification (LOQ)

The LOD and LOQ for SS and NS were estimated at a signal-to noise ratio of 3:1 and 10:1, respectively, by injecting a series of dilute solutions with known concentration.

To determine the robustness of the method the experimental conditions were deliberately changed and the resolution of SS and NS, tailing factor and % RSD for five replicate injections was evaluated. The mobile phase flow rate was 1.0 mL min−1; to study the effect of flow rate on resolution it was changed to 0.9 and 1.1 mL min−1. The effect of pH was studied at pH 2.1 and 2.3 (instead of pH 2.2). The effect of column temperature was studied at 25 and 35°C (instead of 30°C). In all these experiments the mobile phase components were not changed.

The stability of SS and NS in solution was determined by leaving test solutions of the sample and reference standard in tightly capped volumetric flasks at room temperature for 48h during which they were assayed at 24h intervals. Stability in the mobile phase was determined by analysis of freshly prepared sample solutions at 24h intervals for 48h and comparing the results with those obtained from freshly prepared reference standard solutions. The mobile phase was prepared at the beginning of the study period and not changed during the experiment. The RSD (%) of the results was calculated for both the mobile phase and solution-stability experiments.

The method was optimized to separate major degradation products formed under varies stress conditions from SS and NS. The main target of the chromatographic method is to get the separation for closely eluting degradation products, mainly for the degradation product at 3.18 RT, which is eluting very closely to the NS. The degradation samples were run using different stationary phases like C18, C8 and Mobile phases containing buffers like phosphate and acetate with different pH (2-7) and using organic modifiers like acetonitrile and methanol in the mobile phase. But the separation was satisfactory in the adopted chromatographic conditions only. It indicated that the gradient elution with 0.2% ortho phosphoric acid in water as solvent A and acetonitrile and water in the ratio 90:10; v/v, was as solvent B for mobile phase was successful in separating drugs and all chromatographic degradation products (Figure 2). The detailed experimentation is reported in Table 1.

Validation of an analytical procedure is the process by which it is established, by laboratories studies, that the performance characteristics of the procedure meet the requirements for the intended analytical applications [28].

Calibration curve obtained by least square regression analysis between average peak area and the concentration showed (Table 2a and Table 2b) linear relationship with a regression coefficient of 0.999. The best fit linear equation obtained was Y =8620 Con - 5872 for SS and Y=11070 Con - 13451 for NS. Analysis of residuals indicated that the residuals were normally distributed around the mean with uniform variance across all concentrations suggesting the homoscedastic nature of data. Selected linear model with univariant regression showed minimum % bias indicating goodness of fit which was further supported by the low standard error of estimate and mean sum of residual squares.

Table 2a: Residual summary of Linearity results of Sumatriptan succinate

Table 2b: Residual summary of Linearity results of Naproxen sodium

The precision of an analytical method gives information on the random error. It expresses of agreement between a series of measurements obtained from multiple sampling of the same homogeneous sample under prescribed conditions. The percentage RSD values for the precision study was 0.7%, 0.4% (inter-day precision) and 0.6%, 0.7% (intra-day precision) for SS and NS, respectively. This is confirming good precision of the method (Table 3).

Limit of Detection (LOD) and Limit of Quantification (LOQ)

When mobile phase flow rate, pH and column temperature were deliberately varied resolution between SS and NS was greater than 3.0, tailing factor and % RSD for five replicate injections of SS and NS was less than 1.5, illustrating the robustness of the method (Table 5).

Stability in solution and in the mobile phase

Degradation was not observed in SS and NS stressed samples that were subjected to light, heat, water and oxidation. However, the degradation was observed under base hydrolysis and acid hydrolysis. The peak purity test results derived from PDA (Photo Diode Array detector) confirmed that the SS and NS peaks were pure and homogeneous in all the analyzed stress conditions. This indicates that the method is specific and stability indicating (Figure 2 and Table 7). 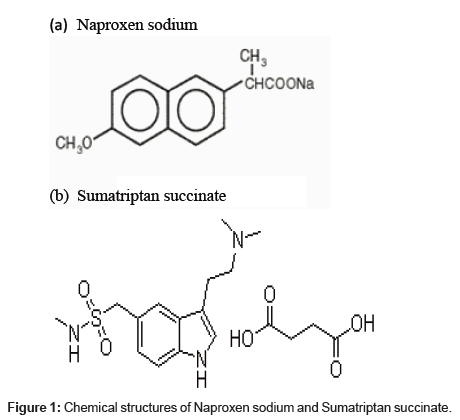 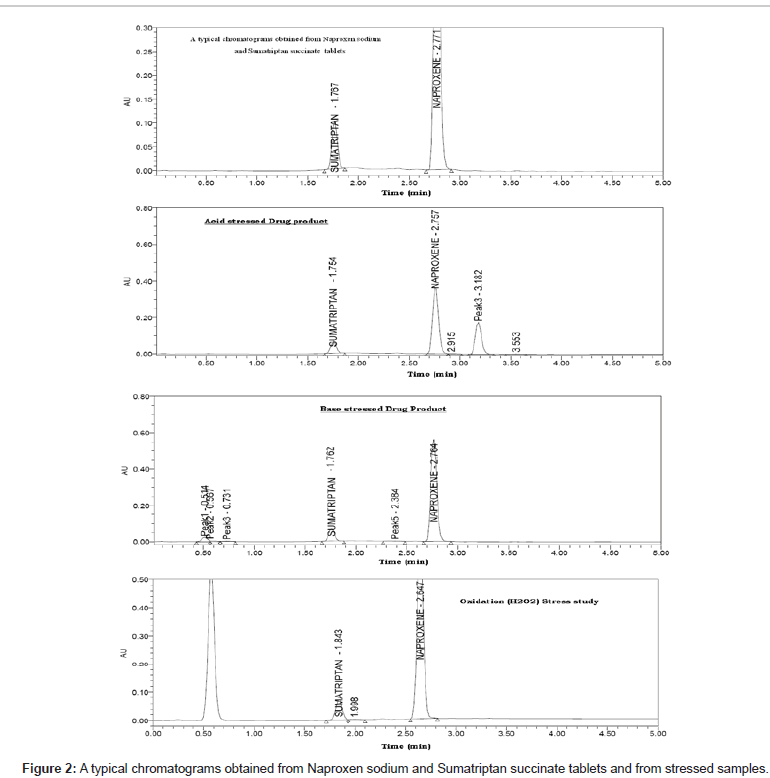 Figure 2: A typical chromatograms obtained from Naproxen sodium and Sumatriptan succinate tablets and from stressed samples.

The authors are very grateful to C-MET for their continuous support for this research work.