Right Upper Eyelid Schwannoma in a Child: A Case Report

Abstract
Schwannoma, also referred to as neurilemmoma, is a benign tumor of peripheral nerve arising from Schwann cells
that form the neural sheath. These tumours along with neurofibromas form the two most common primary peripheral
nerve tumours. Solitary lesions can occur sporadically in the general population but multiple neurofibromas are
distinctive feature of neurofibromatosis type 1 and bilateral acoustic schwannomas are a feature of neurofibromatosis
type 2. Schwannoma of ophthalmic interest is rare although it has been reported in relation with the orbit, and less
frequently with the uveal tract and conjunctiva. Isolated eyelid schwannoma is extremely uncommon. We report the
unusual cases in a 12 years old child, who developed eyelid schwannomas.

Schwannoma is a benign peripheral nerve sheath tumor composed of a proliferation of Schwann cells [1-5]. These tumors preferentially involve spinal nerve roots, and the sympathetic, cervical, and vagus nerves. They may be associated with neurofibromatosis, but solitary schwannoma at any site is not usually associated with this entity. In ophthalmic region it has been reported in relation to the orbit and infrequently to conjunctiva [6], uveal tract [7] and sclera [8]. Eyelid schwannoma is extremely uncommon, and has rarely been reported in the past [2-5], in particular the child. We report here a rarely case of eyelid schwannoma in a child.

A 12-year-old child was referred to us with a two year history of a slowly enlarging, painless nodule on her right upper eyelid. Ocular examination was presence a firm, tenderness nodule measuring 4×3×2 mm in the lateral third of the right upper eyelid (Figure 1). Signs of inflammation were not present in the skin. There were no clinical findings indicative of neurofibromatosis. The lesion was removed under local anesthesia by a full-thickness resection of the eyelid around the tumor. The postoperative course was uneventful and the patient was asymptomatic three years later. On macroscopic examination the nodule was well-circumscribed, measuring 3 mm in diameter with grayish white to yellow appearance on cut sections, partially surrounded by skin. Microscopic examination revealed a biphasic pattern, with highly cellular areas of non-pigmented spindle cells, containing elongated nuclei arranged in fascicles, which were separated by homogenous acellular material (Antoni A pattern). In other areas, the cells were more oval, and had rounded nuclei, clear cytoplasm and less basement membrane, and were loosely entwined within a clear myxoid matrix (Antoni B pattern) (Figure 2a). In addition, in this case was appearanced eyelid schwannoma that partially surrounded by skin (Figure 2b). Immunohistochemical analysis for S100 protein showed a strongly positive reaction (Figure 3). The tumor’s microscopic appearance and positive reaction on immunohistochemical analysis for S100 protein were consistent with schwannoma. 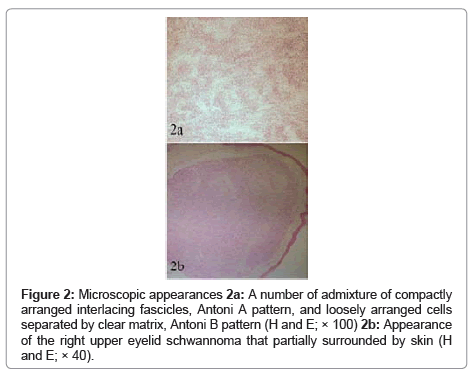 Figure 2: Microscopic appearances 2a: A number of admixture of compactly arranged interlacing fascicles, Antoni A pattern, and loosely arranged cells separated by clear matrix, Antoni B pattern (H and E; × 100) 2b: Appearance of the right upper eyelid schwannoma that partially surrounded by skin (H and E; × 40).

Eyelid schwannoma is a rare, slowly growing, benign neoplasm. Schwann cell tumors generally arise from peripheral or cranial nerves. In most cases, while Schwannoma is sporadically manifested as a single benign neoplasm, the presence of multiple Schwannoma is usually indicative of neurofibromatosis-2. However, the term schwannomatosis or neurilemmomatosis has been used to describe patients with multiple non-vestibular schwannomas with no other stigmatas of neurofibromatosis-2 or neurofibromatosis-1 [9]. Our patient had isolated eyelid Schwannoma with no family history or clinical findings of neurofibromatosis-1 or neurofibromatosis-2. Schwannoma is well known to develop in the orbit, constituting 1% of the orbital tumors in a series by Rootman et al. [10]. Isolated cases have been described in the conjunctiva [6], the uveal tract [7], and the sclera [8]. Its occurrence on the margin of the eyelid is extremely rare. In the Lopez-Tizon series also schwannoma was rare and represented only 0.1% (2/2400) of eyelid neoplasms [11]. Due to its rarity and unusual location, eyelid schwannoma is frequently clinically confused with other diagnoses like chalazion [3], or inclusion cyst [11]. In our case, patient presented with solid slowly enlarging mass of 2 years duration, started in lateral third of right upper eyelid. The tumour probably arose from branches of the supra orbital nerve. Literature suggests that the tumour, though rare, can be present in both upper and the lower eyelids. The size of the tumour ranges from few millimeters to 3.5 cm [12]. To avoid eventual recurrence, surgical excision is indicated and has to be complete. There are several clinico-pathologic variants of schwannoma, including conventional schwannoma, cellular schwannoma, and melanotic schwannoma [13]. Histopathologically, the neoplasm appears to be wellcircumscribed and composed of bundles of elongated cells with thin, attenuated nuclei, like in our case. These cells tend to align themselves into compact parallel rows, with intermittent dense anucleate zones. In other locations, a poor prognosis has been described if the cells are fusiform, contain melanin granules, or if epithelioid cells are present. The neoplasm may demonstrate a biphasic pattern with areas of highly cellular (Antoni type A) and myxoid matrix (Antoni type B) [12]. In our case, we demonstrated a biphasic pattern with areas of highly cellular (Antoni type A) and myxoid matrix (Antoni type B). The most important feature in its diagnosis remains the strong reactivity to S100 protein by immunohistochemistry, particularly in Antoni type A areas. In case, immunohistochemical analysis for S100 protein showed a strongly positive reaction. Despite sometimes striking cytologic atypia, mitotic figures are rare. It is postulated that degenerative changes occur due to the long period of time over which large schwannomas develop [14].

Copyright: © 2012 Gelincik I. This is an open-access article distributed under the terms of the Creative Commons Attribution License, which permits unrestricted use, distribution, and reproduction in any medium, provided the original author and source are credited.