Copyright: © 2013 Soni A, et al. This is an open-access article distributed under the terms of the Creative Commons Attribution License, which permits unrestricted use, distribution, and reproduction in any medium, provided the original author and source are credited.

Tenofovir (TNF) and emtricitabine (FTC) are both reverse transcriptase inhibitors, often used in combination for anti-retroviral therapy. In the present study, a reverse phase high performance liquid chromatographic method was developed and validated for the simultaneous estimation of TNF and FTC in human plasma using stavudine as the internal standard. Protein precipitation extraction procedure utilizing perchloric acid was employed to extract the drugs from human plasma. Estimation of the drug contents was done by using a mixture of sodium dihydrogen orthophosphate buffer (pH 6.9) and methanol as the mobile phase and absorbance was read at 259 nm for TNF and 280 nm for FTC. Retention time was found to be 6.6 (± 0.1) min for TNF and 17.1 (± 0.2) min for FTC. The recovery, selectivity, linearity, precision as well as the accuracy of the method was evaluated from spiked human plasma samples during the course of validation. The result revealed that the analytical technique presented here demonstrates acceptable accuracy and precision, shorter and simpler sample preparation, and a reduced need for complicated equipment along with a tolerable analysis time.

Tenofovir (TNF), (phosphorylmethoxy) propyl-adenine (Figure 1a), a commonly used anti-retroviral agent, is a nucleotide analogue reverse transcriptase inhibitor [1]. Pharmacokinetic profile of the drug is characterized by the elimination half-life of ˜15 hours and a poor bioavailability [2]. Tenofovir disoproxilfumarate (TDF) is a prodrug of TNF, which is known to demonstrate improved bioavailability. When administered in vivo, TDF is hydrolyzed to TNF and subsequently phosphorylated to the active metabolite, tenofovir diphosphate, within the cell where it functions as a competitive inhibitor of reverse trancriptase and as a HIV-DNA chain terminator [3,4]. 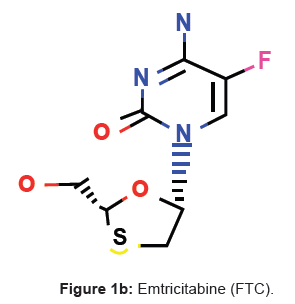 Emtricitabine (5-fluoro-1-[2-hydroxy methyl]1,3-oxathiolan-5 yl)-cytosine, (FTC) (Figure 1b) is adeoxycytidine nucleoside analogue that was recently approved for the treatment of HIV infection [5]. FTC is activated by intracellular phosphorylation to its 5’-triphosphate (FTC5’-TP), which is reported to be a competitive inhibitor of the HIV reverse transcriptase [6]. It has been established as a potent and selective inhibitor against HIV type I and II and hepatitis B virus [5,7]. FTC is reported to exhibit mean plasma elimination half-life of 8-10 hours [8]. TDF and FTC are prescribed as fixed dose combination tablets containing 300 mg of TDF and 200 mg of FTC (Truvada®1) for once daily dosing to be used in combination with other antiretroviral drugs [9]. TDF and FTC have synergistic antiviral effects on both HIV-1 and HIV-2 [10]. The combined formulation is considered to be an efficacious therapy that can be used in multi-drug HIV treatment regimens [11,12]. 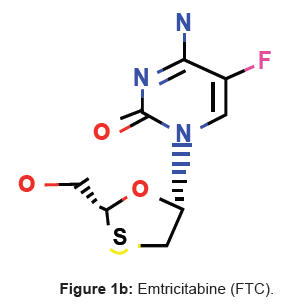 In view of the frequent use of the combination therapy of TDF and FTC, it is relevant to establish a suitable analytical method for the simultaneous estimation of TDF and FTC in human plasma. A previously reported method for the purpose is based solid phase extraction followed by estimation using high performance liquid chromatography (HPLC) equipped with photodiode array detector using 2,3-dideoxyuridine as internal standard [13]. Another HPLC 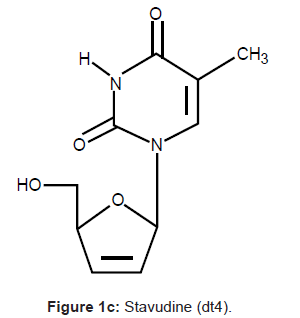 Preparation of dilutions of standard master stock solutions: As TNF has limited solubility in most of the common organic solvents like acetonitrile, ethyl acetate,acetone, isopropanol and it exhibits good solubility in water (Houghton et al. [15]), the drug stock solution was prepared in water. Thus accurately weighed quantity (5.11 mg) of TNF (molecular weight=287.213) was suitably diluted with water to obtain a solution of conc. 1005.026 μg/ml. Similarly aqueous FTC (molecular weight=247.25) solution was also prepared by dissolving accurately weighed quantity (9.56 mg) of drug in water and suitably diluting to contain a conc. of 953.63 μg/ml. The stock solutions were subsequently diluted with mobile phase for spiking in plasma to obtain calibration curve standards. Spiking of blank human plasma was done by diluting 200 μL of each of the dilutions to 10 ml with blank plasma to achieve the standards for CC and QC, as per Table 1. One ml aliquot of each of these standards transferred to polypropylene tubes, which were stored at -25°C to -30°C till time of analysis.

Sample pre-treatment: All the spiked plasma samples, stored at the ˜ -25°C, were brought to room temperature on the day of analysis.

Protein precipitation method: To 500 μl of plasma sample, 50 μL of IS dilution was added. The samples were vortex mixed for about 1 min to facilitate mixing of IS with the analytes. Subsequently, protein precipitation was achieved by adding 200 μl of perchloric acid and the samples were again vortex mixed. These were subjected to refrigerated centrifuge for 15 min at 14000 rpm. After centrifugation the supernatant was transferred to HPLC autosampler vials and 50 μl of the solution was injected into the HPLC column for analysis.

High performance liquid chromatographic conditions: A Hypersil C18 (250 mm×4.0 mm, 5 μm particle size) was used for separation of analytes and for their quantification. During elution, the absorbance was monitored at three different wavelengths; 259 nm for TNF, 280 nm for FTC and 265 nm for stavudine. Mobile phase used was a mixture (96:4) of sodium dihydrogen orthophosphate buffer (pH 6.9 ± 0.05) and methanol. Rinsing solution was a mixture of methanol and water (1:1). All the estimations were performed at 40°C, with mobile phase pumped at a flow rate of 1.0 ml/min. The injection volume was 50 μl. The retention time was found to be 6.6 (± 0.1) min for TNF and 17.1 (± 0.2) min for FTC.

Selectivity: The selectivity of the method was verified by checking the interference of endogenous compounds in human plasma at retention time of the drugs and IS by evaluating six lots of blank plasma.

Precision and accuracy: The precision of the method was determined by the percent coefficient of variation (%CV) over the six replicates of all the quality control samples of the drugs during the course of validation. The accuracy of the assay was defined as the peak area ratio response of the drugs and internal standard versus concentration of the quality control samples to their respective nominal values, expressed as percentage.

Linearity: The linearity of the method was determined by the weighted least square regression analysis of standard plot associated with an eight-point standard curve.

Long term stability: Six replicates of the stored LQC and HQC samples were analyzed after storage at a temperature ˜-25°C for 25 days. The peak area ratios of drugs to internal standard of stored frozen samples were compared to that of freshly spiked samples containing equivalent concentrations.

Freeze-thaw stability: The freeze-thaw stability in matrix was assessed by evaluating six replicates of both LQC and HQC samples previously frozen and thawed over three cycles against freshly spiked standards. The first freezing was done at -25°C for at least 40 hrs, while the subsequent two freezings were done for 24 hrs at the same temperature, using unassisted thawings after each freezing. The samples were then processed for extraction and analyzed.

Bench top stability: The bench top stability was also determined for six replicate of LQC and HQC samples. The samples were processed after keeping them at bench top (room temperature) for about 6 hours and then analyzed against freshly spiked calibration curve standards.

The present study is an attempt to estimate simultaneously two anti-retroviral combination drugs TNF and FTC, in human plasma. The method is based protein precipitation to extract the drugs from human plasma followed by their estimation using high performance liquid chromatographic method.

As evident from the chromatogram of blank plasma (Figure 2a), the response of the interfering peak was found to be insignificant at the retention time of both the analytes i.e. at around 6.6 and 17.1 min. The chromatogram of blank plasma with IS also depicted no interfering peaks at the retention time of the internal standard in selected blanks. (Figure 2b). 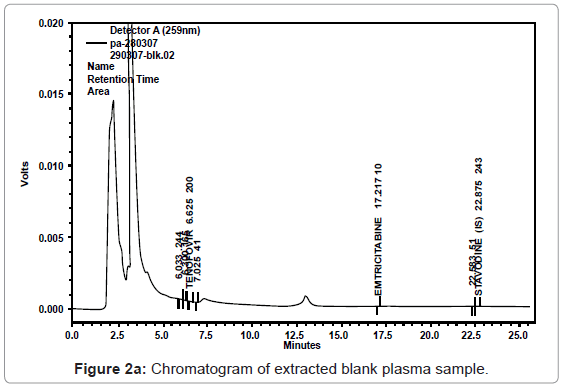 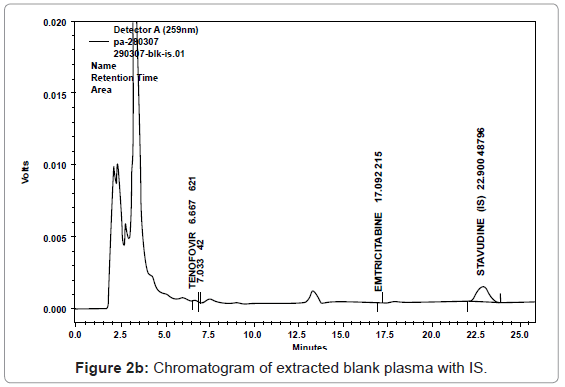 Figure 2b: Chromatogram of extracted blank plasma with IS.

The calibration curves of TNF and FTC are represented in Figures 3a and 3b and were found to be linear from 31.6 to 663.3 ng/ml for TNF and from 200.1 to 4196 ng/ml for FTC. Best fit calibration lines of peak area ratio response of drug and internal standard versus concentration of calibration standards were determined by weighted least square regression analysis with a weighting factor of 1/X for TNF and 1/X2 for FTC. The regression coefficients were consistently greater than 0.99 for both the drugs during the course of validation. 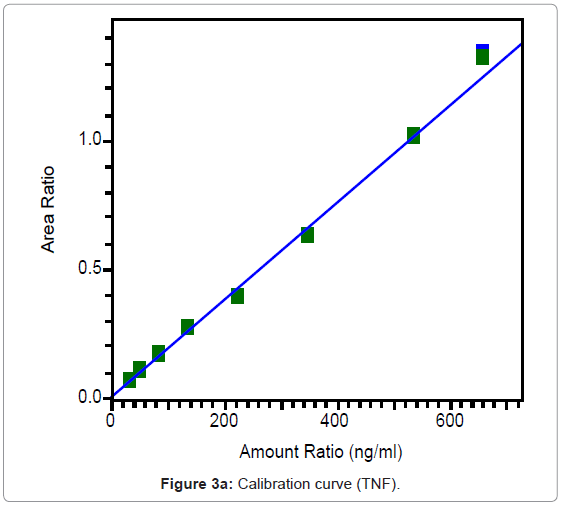 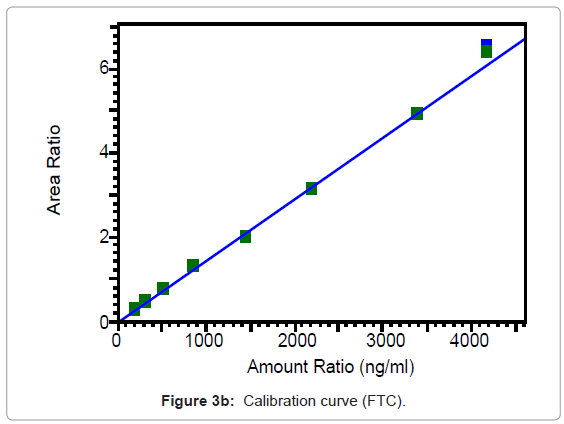 The extraction efficiency for TNF and FTC using protein precipitation method were calculated using ratio of analyte concentration in blood plasma to the identical concentration of analyte prepared in mobile phase without extraction. The analyte recovery for the TNF and FTC was found to be 62.6% and 66.8% respectively and that of the internal standard was 78% (Table 3).

Table 4: Stability of Tenofovir and Emtricitabine.

Freeze-thaw stability: The percentage degradation was determined by back calculating their concentration against freshly spiked calibration curve samples. The concentration of the freeze-thaw samples was calculated to be 103.6 to 107.3% (TNF) and 109.8 to 113.5% (FTC) of the nominal concentration indicating the stability of the drug over three freeze-thaw cycles.

Bench top stability: The drug was found to be stable for at least 6 hours at bench top (at room temperature). The back calculated concentration against freshly spiked calibration standards was within a range of 96.9 to 110.2% (TNF) and 101.7 to 104.5% (FTC) of the nominal concentration.

In-injector stability: The results reveal that the samples were stable for at least 48 hours in the auto injector. The back calculated concentration ranged from 101.2 to 103.6% for TNF and 96.7 to 112.0% for FTC of the nominal concentration.

We wish to thank Ranbaxy research laboratories Gurgaon, India for providing us samples, chemicals, materials and all other facilities used to complete this project.