Copyright: © 2011 Ly SY, et al. This is an open-access article distributed under the terms of the Creative Commons Attribution License, which permits unrestricted use, distribution, and reproduction in any medium, provided the original author and source are credited.

The renewable and low-cost biosensor consisting of graphite pencil counter, reference, and fluorine immobilized on a graphite pencil (FPE) working sensor was explored for use in cyclic voltammetry (CV) and square-wave stripping voltammetry (SW) in cobalt assay. In the voltammetric study, the analytical optimum conditions attained a low detection limit. The results were used for the diagnosis of a frog’s cell cut from its liver. The developed system can be used for organ treatment, biological analysis, and in-vivo diagnostic detection.

Recently, cobalt has become one of the most common metals used for the improvement of the properties of steel and other materials with special properties, such as mechanical and chemical resistance. As they are toxic metals, they have significance in terms of environmental surveillance, food control, and hygiene [12] Occupational exposure to cobalt-containing dust has been associated with the development of pulmonary toxicity, including asthmatic reactions, interstitial fibrosis (hard-metal disease), and lung cancer [8]. Cobalt compounds have been generically classified by the International Agency for Research on Cancer as being “possibly carcinogenic to humans” [8]. Many methods of cobalt detection have been developed: the coupling stopped-flow techniques and CCD detection [12], catalytic adsorptive stripping voltammetry vs. electrothermal atomic-absorption spectrometry [6], resonance ionization mass spectrometry [7], and graphite furnace atomic-absorption spectrometry [2] Spectrophotometry, however, is a time-consuming and expensive system that requires complicated preparation techniques. Voltammetric assay, on the other hand, employs simple and sensitive techniques, such as the use of a situ-plated lead film electrode [4,10], bismuth film microelectrode [4], and others [9,11], but it requires a complicated reference (Ag/AgCl) and platinum counter. Even if they are not simple, in this study, low-priced graphite pencils were used as reference, counter and fluorine coating working electrodes. Moreover, the fluorine-immobilized working sensor is simple and ideal for use in biological assay. Here graphite pencil lead is widely used for working electrode modification in voltammetric diagnosis because it is low-cost and renewable. For example, pencil lead and bismuth film electrode [3], the square-wave voltammetric determination of trepibutone at a pencil graphite electrode [13], and renewable pencil electrode for use in field-based stripping voltammetry [1], among others, have been used for such purpose. In this study, pencil lead was used as a working, reference, and auxiliary electrode. It was also used as a modified working electrode by coating it with fluorine.

A voltammetric trace analyzer was used with the new Bioelectronics-2 system, which was constructed at the authors’ institute. The new version is a computerized handheld voltammetric instrument as big as a typical cellular phone that can be used for the bioassay and sensor techniques for individual and laboratory applications. The method of making an electrode using such instrument is simple. Graphite pencil (PE: 0.5-mm-diameter B type) was used as reference, working, and auxiliary electrodes. FPE fluorine immobilization was performed in a 10-mL HF standard solution (1000 mg/L HF) with a 10-cycle scan, 1.0 V initial potential, -1.0 V switching potential, and 0.5 V/s scan rate. Under these conditions, the FPE was stabilized and then used for the optimization.

First, the redox peak potential and the cobalt variation were examined using cyclic scanning with PE. In this study, graphite pencil was used as reference and auxiliary electrodes. Figure 1 (A) shows the CV result using PE within the 2-21 mgL-¹ range. Here, the peak currents 2.974, 2.843, 2.63, 2.264, 1.397, 1.37, and 0.8337x10-5 A were obtained. The peak current oscillated, becoming wider and deeper. Figure 1(B) shows the comparison of PE and FPE using SW. FPE is the pencil coated with fluorine. The curve with a black circle is the result of FPE using SW. The linear equation was y=0.2764x+3.6429, and the precision was R²=0.9439. The curve with a white circle is the result of PE using SW. The linear equation was y=0.2097x+1.3237, and the precision was R²=0.9142. The curve of FPE had low currents, and its detection ranges were more sensitive than its PE. FPE was thus selected as a working electrode, auxiliary PE, and reference PE in this study. For the optimum conditions, the following SW parameters were determined using FPE, with an SW amplitude variation from 0.025 to 0.065 V, an SW frequency from 5 to 50 HZ, and an SW time variation of 5-120 s (not shown here): 0.065 V amp, 50 Hz frequency, and 120 s accumulation time. The analytical working ranges were examined using these parameters. Under the optimum conditions, the analytical working ranges were examined using FPE. Figure 2(A) shows the results of the microgram variation from 100- to 1000-ug/L add. The blank was simple and linear, and the more cobalt was spiked, the deeper the peak current became. The width of the cobalt peak narrowed between -0.6 and -0.7 V. Its linear equation was y=0.023x+3.669, and the precision was R2= 0.09817. These equations can be applied to in-vivo or in-vitro analysis. Figure 2 (B) shows the statistics using CV. 100 mg/L was spiked, and the cycles were examined. From the first to the sixth cycles, the peak current went up and down repeatedly. After seven cycles, the peak current oscillated from 9.084 to 9.759x10-5 A, but it dropped slightly to 8.769x10-5 A at the fourth cycle and then stabilized. Under these conditions, Figure 2(C) shows the interference effects. The various analytical analogic metals were examined by adding them to the medium containing 0.1 mg/L cobalt, for the tenfold spiking of 1 mg/L Cd, Au, Fe, Al, Cr, and Ag. This yielded results of 272, 193, -72, -100, -93, and 109%, respectively. The analytical interferences can be corrected using standard addition methods. Under these conditions, the usable working range was examined using SWSV.

Figure 2: (A) The SW concentration effects using the optimum conditions of 50 Hz frequency, 0.065 V amplitude, and 120 s accumulation time in a 0.1M NH4H2PO4 electrolyte solution. (B) Statistics for CV. (C) The interference test done on the metal ions.

After optimization, analytical application was performed in-vivo tissue. Then SW anodic scan was performed on the frog’s cell using contaminated site live. Three electrode systems were used as reference and auxiliary electrodes. The working electrode was the pencil that was coated with fluorine ten times. 0.82-g frog’s liver was cut and then diluted using conc HNO3 and 100 mL distilled water. Figure 3 shows that the electrolyte blank was linear and had no signal. A 0.1-mL tissue solution was added, then a -0.6 V cobalt potential with the 1.861x10-5 a peak current was obtained. The statistic standard deviation (n=5) was 0.0229. Other previous papers were reported to 0.93-0.81 ug/L Co ion using ex vivo urine of 10 patients [6]. This result shows that FPE can be applied to in-vivo fluid diagnosis. 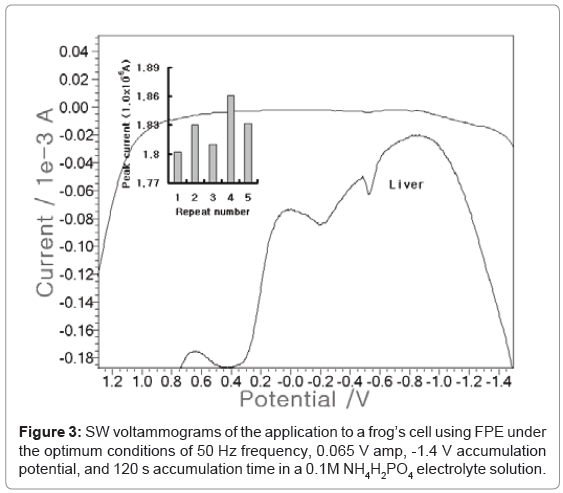 Even though low-cost modified graphite pencil was used in this study as working, reference, and auxiliary electrodes instead of the Ag/AgCl and platinum wire electrodes, they yielded good results. Moreover, the working electrode was made with a fluorine-immobilized sensor. The optimum conditions were examined, and they attained low detection ranges. After the application experiment, microgram cobalt was detected in the frog’s cell at the detection limit of 100 ug/L. This experiment result shows that FPE can be applied to animal or human cells.

This work was supported by the Ministry of Land Transport and Maritime Affairs of Korea (PM55092).