Copyright: © 2010 Dhaneshwar SR, et al. This is an open-access article distributed under the terms of the Creative Commons Attribution License, which permits unrestricted use, distribution, and reproduction in any medium, provided the original author and source are credited.

MET is chemically 1,1-dimethyl biguanide [1] (Figure 1). Despite its therapeutic benefits, the actual mode of action of Metformin is uncertain. It acts by activating AMP-activated protein kinase (AMPK) in liver cells, leading to increased fatty acid oxidation and glucose uptake by cells and decreased lipogenesis and hepatic glucose production. Its net effect is an improvement in insulin resistance.

ATV is (3R,5R)-7-[2-(4-fluorophenyl)-3-phenyl-4-(phenylcarbamoyl)- 5-(propan-2-yl)-1H-pyrrol-1-yl]-3,5-dihydroxyheptanoic acid [2] (Figure 2). It is a HMG-CoA (3-hydroxy-3-methylglutaryl-coenzymeA) reductase inhibitor. This enzyme is involved in cholesterol biosynthesis by catalyzing the conversion reaction of HMG-CoA to mevalonate. The function of lowering the amount of cholesterol results in clearing the LDP (low-density lipoprotein) cholesterol in the blood by increased LDL receptors. 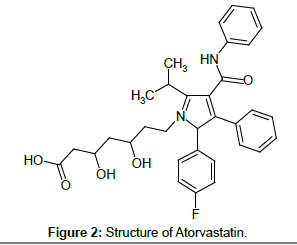 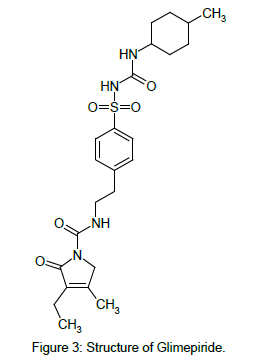 Hence, the combination of MET, ATV and GLM extended release complement each other and provides reduction in plasma cholesterol along with glycaemic control thereby providing a comprehensive control of diabetes and associated dyslipidemia.

The primary mechanism of action of glimepiride in lowering blood glucose appears to be dependent on stimulating the release of insulin from functioning pancreatic beta cells. In addition, extrapancreatic effects may also play a role in the activity of sulphonylureas such as glimepiride.

Today TLC is rapidly becoming a routine analytical technique due to its advantages of low operating costs, high sample throughput and the need for minimum sample preparation. The major advantage of TLC is that several samples can be run simultaneously using a small quantity of mobile phase unlike HPLC thus reducing the analysis time and cost per analysis.

Working standards of pharmaceutical grade MET (Batch No.: 3489/201), ATV (Batch No.: 5436/501) and GLM (Batch No.: 2895/213) were obtained as generous gifts from Cipla Limited, Patalganga (Maharashtra, India). They were used without further purification and certified to contain 99.96%, 99.98% and 99.99% (w/w) on dry weight basis for MET, ATV and GLM respectively. Fixed dose combination tablets (Brand Name: TRIPILL 2) containing 500 mg of MET, 10 mg of ATV and 2 mg of GLM were procured from Cipla Ltd. India. All chemicals and reagents of analytical grade were purchased from Merck Chemicals, Mumbai, India.

The samples were spotted in the form of bands of width 6 mm with a Camag 100 microlitre sample (Hamilton, Bonded, Switzerland) syringe on silica gel precoated aluminum plate 60F – 254 plates, [20 cm × 10 cm with 250µm thickness; E. Merck, Darmstadt, Germany] using a Camag Linomat V (Switzerland) sample applicator. The plates were prewashed with methanol and activated at 110oC for 5 min prior to chromatography. A constant application rate of 0.1µL/s was used and the space between two bands was 5 mm. The slit dimension was kept at 5 mm × 0.45 mm and the scanning speed was 10 mm/s. The monochromator bandwidth was set at 20 nm, each track was scanned three times and baseline correction was used. The mobile phase consisted of water:methanol:ammonium sulphate (1:1:4 v/v/v) and 12 mL of mobile phase was used per chromatography run. Linear ascending development was carried out in a 20 cm × 10 cm twin trough glass chamber (Camag, Muttenz, Switzerland) saturated with the mobile phase. The optimized chamber saturation time for the mobile phase was 40 min at room temperature (25oC ± 2) at relative humidity of 60% ± 5. The saturation time was kept more than an ideal time (30 min) because of less amount of organic solvent present in the mobile phase used for chromatography run. Each chromatogram was developed over a distance of 8 cm. Following the development the TLC plates were dried in a stream of air with the help of an air dryer in a wooden chamber with adequate ventilation. The flow rate in laboratory was maintained unidirectional (laminar flow, towards the exhaust). Densitometric scanning was performed using a Camag TLC scanner III in the reflectance absorbance mode at 237 nm and operated by CATS software (V 3.15, Camag). The source of radiation used was deuterium lamp emitting a continuous UV spectrum between 190 and 400 nm. Concentrations of the compound chromatographed were determined from the intensity of the diffused light. Evaluation was performed by linear regression of peak areas determined by UV absorption as a function of sample amounts.

Optimization of the HPTLC method

The TLC procedure was optimized with a view to develop a simultaneous assay method for MET, ATV and GLM respectively. The mixed standard stock solution (100µg/mL of MET, 100µg/mL of GLM and 100µg/mL of ATV) were taken and 10µL sample was spotted on to TLC plates and run in different solvent systems. Optimization of HPTLC method was very difficult in this case as MET was not moving at all. After many trials it was found that ammonium sulphate is necessary for movement of MET (Figure 4). Hence, water:methanol:ammonium sulphate was tried in different ratios. In order to reduce the neck less effect TLC chamber was saturated for 45 min using saturation pads. The mobile phase was run up to a distance of 8 cm; which takes approximately 30 min for complete development of the TLC plate. 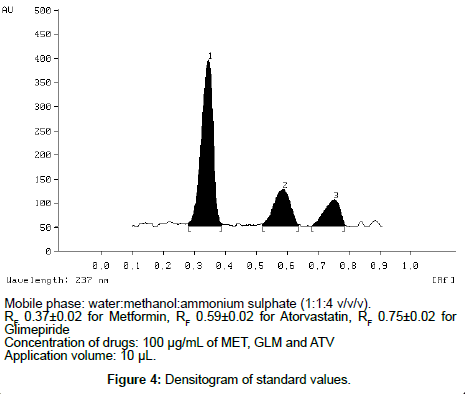 Validation of the optimized TLC method was carried out with respect to the following parameters.

From the mixed standard stock solution, 50µg/mL of MET, 150µg/ mL of GLM and ATV respectively, 4 to 14µL solution were spotted on TLC plate to obtain final concentration 200-700 ng/spot for MET, 600-2100 ng/spot for ATV and GLM. Each concentration was applied six times to the TLC plate. The plate was then developed using the previously described mobile phase and the peak areas were plotted against the corresponding concentrations to obtain the calibration curves. Linearity of the method was studied by injecting six concentrations of the drug prepared in the mobile phase in triplicate into the system keeping the injection volume constant. The peak areas were plotted against concentrations to obtain the calibration graphs.

Limit of detection and limit of quantitaiton

Limits of detection (LOD) and quantification (LOQ) represent the concentration of the analyte that would yield signal-to-noise ratios of 3 for LOD and 10 for LOQ, respectively. LOD and LOQ were determined by measuring the magnitude of analytical background by spotting a blank and calculating the signal-to-noise ratio for MET, ATV and GLM by spotting a series of solutions until the S/N ratio 3 for LOD and 10 for LOQ. To determine the LOD and LOQ, serial dilutions of mixed standard solution of MET, ATV and GLM were performed from the standard stock solution in the range of 10–700 ng/spot. The samples were applied to TLC plate and the chromatograms were run and measured signal from the samples was compared with those of blank samples.

Robustness of the method

Following the introduction of small changes in the mobile phase composition (± 0.1 mL for each component), the effects on the results was examined. Mobile phases having different compositions, e.g. water:methanol:ammonium sulphate (1:1:4.1 v/v/v), (1:1.1:4 v/v/v), (1.1:1:4 v/v/v), were tried and chromatograms were run. The amount of mobile phase was varied over the range of ± 5%. The plates were prewashed with methanol and activated at 110°C for 2, 5, and 7 min respectively prior to chromatography. The time from spotting to chromatography and from chromatography to scanning was varied from ± 10 min. The robustness of the method was determined at three different concentration levels for 200 ng/spot, 400 ng/spot and 600 ng/spot for MET, 600 ng/spot, 1200 ng/spot and 1800 ng/spot for ATV and GLM.

The specificity of the method was determined by analyzing standard drug and test samples. The spot for MET, ATV and GLM in the samples was confirmed by comparing the RF and spectrum of the spot with that of a standard. The peak purity of MET, ATV and GLM was determined by comparing the spectrum at three different regions of the spot i.e. peak start (S), peak apex (M) and peak end (E).

Accuracy of the method was carried out by applying the method to drug sample (MET, ATV and GLM combination tablet) to which known amount of MET, ATV and GLM standard powder corresponding to 80, 100 and 120% of label claim had been added (standard addition method), mixed and the powder was extracted and analyzed by running chromatogram in optimized mobile phase.

Analysis of a marketed formulation

The results of validation studies on simultaneous method developed for MET, ATV and GLM in the current study involving water:methanol:ammonium sulphate (1:1:4, v/v/v) as the mobile phase for TLC are given below.

Robustness of the method

The standard deviation of peak areas was calculated for each parameter and the% RSD was found to be less than 2. The low values of the% RSD, as shown in Table 2 indicated the robustness of the method.

As shown from the data in Table 3 good recoveries of the MET, ATV and GLM in the range from 98.75 to 101.50% were obtained at various added concentrations.

Analysis of a formulation

Experimental results of the amount of MET, ATV and GLM in tablets, expressed as a percentage of label claim were in good agreement with the label claims thereby suggesting that there is no interference from any of the excipients which are normally present in tablets. Two different lots of MET, ATV and GLM combination tablets were analyzed using the proposed procedures (Table 4).

Introducing TLC into pharmaceutical analysis represents a major step in terms of quality assurance. The developed TLC technique is precise, specific and accurate. Statistical analysis proves that the method is suitable for the analysis of MET, ATV and GLM as bulk drug and in pharmaceutical formulation without any interference from the excipients. It was concluded that the developed method offered several advantages such as rapid, cost effective, simple mobile phase and sample preparation steps and improved sensitivity made it specific, reliable and easily reproducible in any quality control set-up providing all the parameters are followed accurately for its intended use. It may be extended to study the degradation kinetics of MET, ATV and GLM, also for its estimation in plasma and other biological fluids. The proposed TLC method is less expensive, simpler, rapid, and more flexible than HPLC.