Copyright: © 2010 Liu Y, et al. This is an open-access article distributed under the terms of the Creative Commons Attribution License, which permits unrestricted use, distribution, and reproduction in any medium, provided the original author and source are credited.

A rapid and simple method for the separation and quanti fi cation of paromomycin sulfate and its impurities by HPLC coupled with evaporative light scattering detection (ELSD) was developed. The chromatographic conditions included the use of a GRACE Alltima C 18 column (250mm×4.6mm, 5 μ m) maintained at 30°C and a mobile phase of 0.2 M tri fl uoroacetic acid water–acetonitrile (96:4, v/v) at a fl ow rate of 0.6 mL/min. The in fl uence of gas pressure and temperature of the drift tube in the detector on the detection response was also investigated. A system suitability test to check the quality of the separation was speci fi ed. The method showed good repeatability, linearity and robustness. It also enabled the simultaneous determination of the inorganic counter ions (sulfates).

Paromomycin (PARO, synonym: aminosidine, Figure 1), a broad spectrum aminoglycoside antibiotic first isolated in 1956 from the fermentation of streptomyces [1], shows activity against both grampositive and gram-negative bacteria as well as some protozoa and cestodes. Although it is not used as an antibiotic any more, paromomycin has been approved since 2007 in India as an effective, well tolerated and affordable treatment for visceral leishmaniasis (VL) [2]. Recently it is being developed for use against multi-drug resistant strains of tuberculosis [3-4] and for the treatment of intestinal cryptosporidiosis in AIDS patients [5-8]. 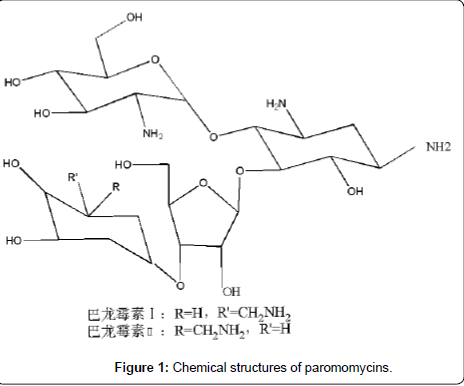 Various methods have been developed for the analysis of paromomycin, which include capillary zone electrophoresis [9] , capillary electrophoresis [10] , reverse-phase ion-pairing HPLC coupled with pulsed amperometric detection [11], LC-MS [12,13], the use of silver-coated gold nanoparticles as concentrating probes and matrices for surface-assisted laser desorption/ionization mass spectrometry [14], and gas-liquid chromatography. Aminoglycosides can be oxidized and therefore directly detected by amperometry. Pulsed amperometric detection (PAD) has broad linear range and very low detection limits for aminoglycoside antibiotics [15]. Like other aminoglycosides, paromomycin has no ultraviolet (UV) absorbing chromophores, and therefore the derivatization of the amino groups is required for high-performance liquid chromatography (HPLC) analyses with UV detection [16]. A HPLC method with fluorescence detection is also developed with post-column derivatization with ortho-phthalaldehyde (OPA) and 2-mercaptoethanol. Pre-column labeling with OPA is not used because of the low stability of the derivative [17]. Because of the thermal instability of aminoglycosides, the analysis of aminoglycosides by GC or gas-chromatography/mass spectrometry (GC/MS) is difficult [18]. The analysis of paromomycin by evaporative light-scattering detection (ELSD) has not been reported previously. ELSD has been applied as a universal detection method [19,20] when coupled with liquid chromatography. Different aminoglycosides generally produce the same response with ELSD detection. Therefore, the impurities can be easily quantified [21]. The present study developed and validated a specific, accurate and relative sensitive HPLC-ELSD method for determining paromomycin sulfate and its impurities. This method also enables the simultaneous determination of the inorganic counter ions (sulfates).

HPLC grade trifluoroacetic acid (TFA) was purchased from Tedia (America). HPLC grade methanol and acetonitrile were purchased from Merck (Darmstadt, Germany). Paromomycin RS (batch no. 130371- 200305) and Neamine RS (Batch No. 85-1106) were purchased from the National Institute for the Control of Pharmaceutical and Biological Products, China. Paromomycin samples (Batch No. 20050409-004, 20050412-005, and 20050420-007) were obtained from Kaifeng Pharmaceutical Company. All other chemicals and solvents were of the highest grade available.

The chromatographic separation was carried out using a GRACE Alltima C18 (250mm×4.6mm I.D., 5μm) column. The mobile-phase was 0.2 M trifluoroacetic acid water – acetonitrile (96:4). The flow rate was 0.6 mL/min, and the column temperature was maintained at 35°C. The nebulizing gas was high purity nitrogen. For Waters 2424 detector, a low temperature evaporative light scattering detector, the shift tube temperature was 60°C and the gas pressure was 30 psi.

Most of the mobile phases for the separation and detection of aminoglycoside antibiotics by HPLC-ELSD are based on TFAmethanol/ acetonitrile system [20-22]. Therefore, we selected TFA as the ion-pairing agent. Increasing of the concentration of the ionpairing agent resulted in the increase of the resolution between paromomycin and its nearest impurity. However, the HPLC system pressure was increased, and the high acid concentration shortened the column life. After testing a series of TFA concentrations, the optimal concentration was determined to be 0.2 M.

After selecting TFA as the ion-pairing agent, we tested methanol as the organic phase. However, paromomycin and the nearest impurity could not be separated efficiently. When acetonitrile was used as the organic phase, paromomycin and the nearest impurity were separated well. The final mobile phase was determined as 0.2 M trifluoroacetic acid water– acetonitrile (96:4).

The eluting mobile phase was nebulized and volatilized in the drift tube in ELSD. The temperature and the gas pressure were of critical importance to insure complete vaporization of the solvents. The nature of the gas used for the nebulization had been shown to play a key role in heat transfer and detection sensitivity [22]. The influence of the gas pressure and the drift tube temperature on paromomycin response was studied. 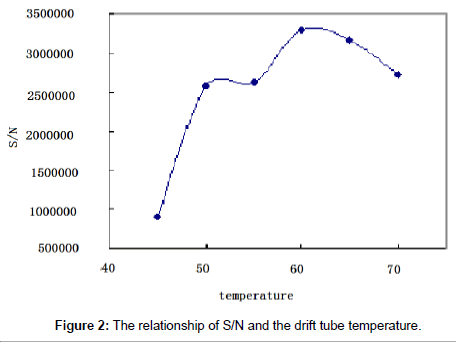 Figure 2: The relationship of S/N and the drift tube temperature.

The gas pressure: In ELSD it is ideal to obtain the highest peak response with the lowest gas pressure. We tested the influence of gas pressure on peak area at the optimal drift tube temperature. The optimal gas pressure was determined to be 30 psi (Figure 3). 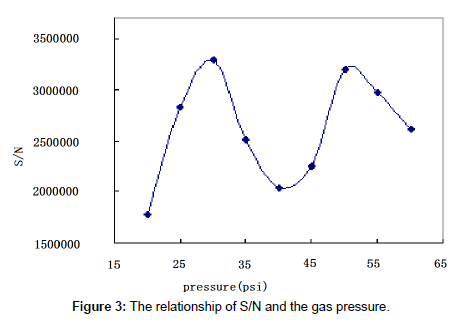 Figure 3: The relationship of S/N and the gas pressure.

Selection of solvent to dissolve sample

Paromomycin dissolved in the mobile phase was not stable and a new impurity appeared. The content of this impurity also changed with the ratios of 0.2 M TFA water to acetonitrile. When the ratio of 0.2 M TFA water and acetonitrile was 80:20, the content of the new impurity was the highest (Figure 4). Therefore, water was selected as the solvent to dissolve the sample. The RSD of paromomycin peak in the water solution was 1.1% (n =7) in 8 hours, indicating the water solution of paromomycin was stable. 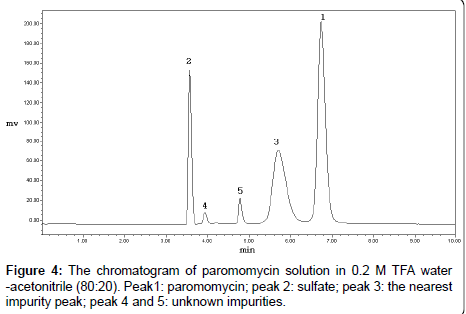 Paromomycin (0.5 mg/ml) degraded in 0.2 M TFA wateracetonitrile (80:20) was used as the system suitability solution (Figure 4). The resolution between paromomycin and the nearest impurity was defined.

The method repeatability was determined by carrying out six determinations at 100% of the test concentration (0.50 mg/ml). The relative standard deviation (RSD) was 0.8% for paromomycin, indicating high repeatability.

The intermediate precision was determined by six injections of the test solution (0.50 mg/ml) on 2 days. The inter-day precision was then calculated, and the relative standard deviation (RSD) was 1.5% for paromomycin.

Light scattering is a complex process involving several mechanisms. It is usually described as a mixture of Rayleigh scattering, Mie scattering, diffraction and reflection. It is well known that ELSD gives no direct linear response [23]. The calibration curve was generated by preparing and analyzing nine calibration samples covering the concentration range of 23.6784.1 μg/ml. Each sample was injected in triplicate. The double logarithm linear equation for analysis of paromomycin was, y =1.3607 + χ7.3311, γ2 = 0.9997 indicating good linearity.

The commercial samples of paromomycin were analyzed by the developed HPLC-ELSD method (Figure 5). Samples from three different batches were dissolved and diluted with water to the appropriate concentrations. Paromomycin RS solutions of 0.2, 0.5 and 0.7 mg/ml were prepared, and a regression equation was made with logarithm of concentration to the logarithm of peak area correspondingly, and the correlation coefficient should not be less than 0.99. The concentrations of paromomycin in commercial samples were calculated with the regression equation. In the meantime, the potency was determined by the microbial assay with cylinder-plate method. Results are summarized in Table 1. 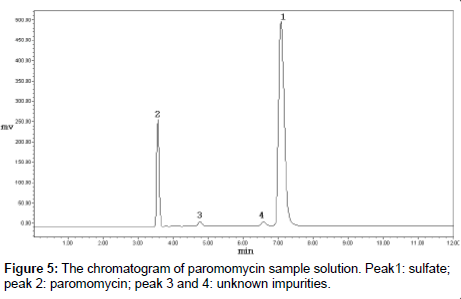 Sulfate was eluted before paromomycin and could be separated from the other peaks. Therefore, the content of sulfate could be determined by the standard curve method. Sulfate standard solutions at 0.075, 0.15, 0.20, and 0.50 mg/ml were prepared with sulfuric acid, and a regression equation was made with logarithm of concentration to the logarithm of peak area. The regression equation was y =1.7744 χ + 10.518, γ2 = 0.9992. The method was also validated. The liner range was 0.075–0.20mg/ml, and the accuracy was 1.35% (n =3). The contents of sulfate in commercial samples were calculated with the regression equation. Results are summarized in Table 1.

The developed HPLC-ELSD method, using a reverse-phase C18 column, allowed the separation of paromomycin from its impurities. The nearest peak before paromomycin might be an enantiomer, and the other impurities were unknown. The experiments to identify these impurities by LC-MS are under way. The method was specific, robust, and fairly sensitive. Paromomycin sulfate was stable in water for 8 h, a time period that is sufficient for most assays. The method was used for the analysis of commercial samples, and it was also used to determine the inorganic counter ions (sulfates).