3Department of Pharmaceutical Technology and Cosmetology, University of Belgrade, Serbia

Copyright: © 2016 Ivkovic B, et al. This is an open-access article distributed under the terms of the Creative Commons Attribution License, which permits unrestricted use, distribution, and reproduction in any medium, provided the original author and source are credited.

In this paper, the separation of metoprolol tartarate enantiomers using conventional achiral chromatography was followed employing experimental design 24. Design was useful tool in evaluation of chromatographic behavior of enantiomers. For the separation, Supelcosil LC18 4.6 mm × 250 mm, 5 m particle size column was used. UV detection was performed at 275 nm. Because of the large number of factors which can influence chromatographic separation, in preliminary study ″one factor at a time″ method was applied to define values of important factors. As outputs, retention factor, selectivity factor and resolution factors were chosen. Chromatographic behavior of investigated enantiomers was affected by acetonitrile content, chiral modificator content in the mobile phase and flow rate the most, demonstrated by obtained linear models. On the basis of results from screening of experiment, factors with strong influence on the separation, were analyzed in method optimization applying response surface methodology (RSM). The appropriate region of chromatographic behavior of metoprolol tartarate enantiomers was defined using three-D graphs and analysis of variance. The methodology proposed represents an efficient approach in resolving the problem of searching for optimal HPLC chromatographic conditions via experimental design.

Most β-adrenergic antagonists (β-blockers) are therapeutically used as a racemic mixture and their enantiomers demonstrate different pharmacodynamic and pharmacokinetic properties [1,2]. The both enantiomers are reducing blood pressure, but the therapeutic effects of the (S)-enantiomer is about 100 times stronger than (R)-enantiomer. The increasing demands for the production of enantiomerically pure drugs have led to enantioselective separations becoming one of the most important analytical tasks. In this context, enantioselective HPLC is one of the most powerful and widely employed separation techniques, both for analytical and preparative purposes, as well as for research in pharmaceutical and biomedical analysis.

The aim of our investigation was analysis of metoprolol tartarate enantiomers using achiral stationary phase with β-cyclodextrin as chiral additive in the mobile phase. The experimental design was applied as the best way to define chromatographic behavior of enantiomers. Analysis employed ″one factor at a time″ method for preliminary study, full factorial design for screening of experiment and response surface methodology (RSM) for method optimization. A literature search showed many experimental design applications in analytical method development and validation, especially in the area of separation science. Experimental design has been used for separation optimization [10-12] and for validation in RP-HPLC method [13,14]. It was used for robustness testing in RP-HPLC method [15,16] and capillary electrophoresis [17]. The methodology proposed in this paper represents novel, efficient and easily attainable approach in resolving metoprolol tartarate enantiomers using conventional achiral chromatography.

Buffer solution was prepared by adding of 2 ml of TEA to 600 ml of HPLC water, pH was adjusted in the range from 2 to 6 with glacial acetic acid.

Solution for equlibration and storage of column

Solution was prepared in concentration of 3 mM of β-CD in water.

In preliminary investigations, influence of different chromatographic factors on separation of metoprolol tartarate enantiomers was analyzed. As the separation was performed employing conventional achiral chromatography, beta cyclodextrine (β-CD) was added to the mobile phase as chiral modificator. Mobile phases consisted of acetonitrile and β-CD in triethylamine/glacial acetic acid buffer in different ratios. Column was stored and conditioned with solution of 3 mM of β-CD in water. In chromarography many factors can influence separation e.g., content of organic modifier in mobile phase, pH of the mobile phase, column temperature, flow rate, concentration of solute etc. In the first step of our study, pH of the mobile phase and temperature were defined using "one factor at a time" method. pH of the mobile phase (2.5; 3.0; 4.0; 5.0 and 6.0) was changed and other factors were kept at constant level. Obtained chromatograms demonstrated the best separation of enantiomers at pH 3.0 and in following investigations it remained constant. Secondly, temperature was analyzed on two levels 30°C and 40°C. The accepted separation was at 35°C column temperature.

In the second step, for the screening of experiment, full factorial design 24 was chosen. Full factorial designs at two levels are mainly used for screening, that is, to determine the influence of a number of effects on a response and to eliminate those that are not significant [18]. Selected factors and their "low" (–) and "high" (+) levels are presented in Table 1. Matrix of the experiment is given in Table 2.

Table 1: Factor and their levels.

Table 2: Matrix for screening of experiment.

In experimental design for the evaluation of influence of investigated factors, on measured response, mathematical model was applied. Often form of a mathemathical model is:

where y presents the estimate response, b0, is the average experimental response, the coefficients b1 to bN are the estimated effects of the factors considered and the extend to which these terms affect the performance of the method is called main effect. The coefficients b12 to b(N-1)N are called the interaction terms. We can see that the factorial design provides information about the importance of interaction between the factors [18]. The calculating coefficients of mathematical models for outputs are presented in Table 4.

The results showed that acetonitrile content and concentration of β-CD had the biggest influence on retention factors (Y1 and Y2). The flow rate and content of β-CD influenced selectivity factor (Y3) and resolution (Y4) the most. Concentration of metoprolol tartarate had negligible influence on analyzed outputs and in further investigations it was kept constant.

Table 5: Matrix of experiment for optimization.

Table 6: Results of experiment for optimization.

On the basis of the results, outputs Y1 and Y4 were chosen to analyze separation. The results for others outputs gave bad coefficient of determination (≤ 0.5) and they fitted badly in the obtained model. Those results could be explained with different characters of metoprolol tartarate enantiomers. The results for analysis of variance concerning influence of acetonitrile content and β-CD content, as the most important inputs, are presented in Table 7 for output Y1 and in Table 8 for output Y4.

Table 7: Analysis of variance for variables and for the full regression for retention factor (k’1).

Table 8: Analysis of variance for variables and for the full regression for resolution factor (Rs).

Coefficients of determination (R2) and results for factor Fisher value (F) demonstrated good fitting of obtained results in mathematical model. Suitable three-D graphs are presented in Figure 1 for output Y1 and in Figure 2 for output Y4. Obtained three-D graphs gave information about influence of acetonitrile content and chiral modificator concentration on metoprolol tartarate enantiomers separation. The connection between influence of the factors and outputs can be presented with second order polynoms. The obtained polynoms are presented as Equation 2 and Equation 3.

where is Y1-is retention factor of enantiomer R (+)

where is Y4-is resolution factor

As it could be seen from the Figure 1, retention factor of the first enantiomer has a higher value for higher content of β-CD and higher content of acetonitrile. Also, strong influence of acetonitrile content is obvious and drastical decrease of retention factor was observed. On the other hand, resolution factor is under strong influence of both investigated factors. It is clear that both factors must be carefully set in order to achieve acceptable separation of enantiomers investigated.

According to the presented results the best separation of metoprolol tartarate enantiomers can be achieved with mobile phase: acetonitrile-5.87 mM β-CD (14.3:85.7), pH of the mobile phase adjusted to 3.0 and flow rate 1.5 ml min-1 at 35°C column temperature. Under these conditions the value of the resolution factor is 0.98. The representative chromatograms are presented in Figure 3. 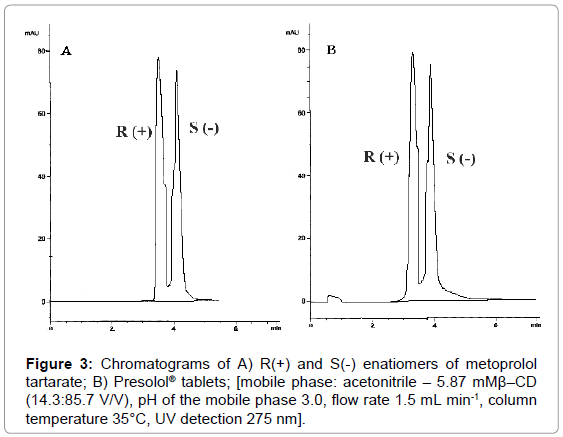 Applying experimental design it was possible to achieve optimal separation of metoprolol tartarate enantiomers performing a relatively small number of experiments. In this paper full factorial design 24 was used for experiment screening. Chromatographic behavior of investigated enantiomers was affected by acetonitrile content, chiral modificator content in the mobile phase and flow rate the most, which was demonstrated by obtained linear models. After experimental screening, RSM was used for optimization of RP–HPLC method and optimal chromatographic conditions were settled. The proposed methodology represents an efficient and easily attainable approach in resolving the problem of searching for optimal HPLC chromatographic conditions via experimental design.

Our work was supported by the Scientific Research Grants from the Ministry of Science and Technology OI172041 (Serbia).