Copyright: © 2011 Jain PS, et al. This is an open-access article distributed under the terms of the Creative Commons Attribution License, which permits unrestricted use, distribution, and reproduction in any medium, provided the original author and source are credited.

A simple, selective, precise densitometric HPTLC method for analysis of 6-Gingerol both in chloroform extract of Zingiber officinalis and in laxiwin formulation has been developed and validated. The method employed HPTLC aluminium plates precoated with silica gel 60F-254 as the stationary phase. The phytoconstituent, 6-Gingerol was separated with mobile phase toluene: ethyl acetate (7:3 %, v/v). A compact band was obtained for 6-gingerol at R F 0.33±0.02. Densitometric analysis of 6-gingerol was carried out in the absorbance mode at 254 nm. The linear regression analysis data for the calibration plots showed good linear relationship with r 2 = 0.9981 with respect to peak area in the concentration range 150–900 ng per spot. The mean value of slope and intercept were 4.103 and 398.6 with respect to peak area. The method was validated for precision, recovery and robustness. The limits of detection and quantitation were 24.13 and 63.83 ng per spot, respectively. This novel Statistical analysis proves that the method is repeatable and selective for the analysis of 6-Gingerol in extract and in pharmaceutical formulations.

Zingiber officinalis is a rhizome of the family Zingiberaceae which is distributed in South East Asia and cultivated in Caribbean islands Africa, Australia, Mauritius, Jamaica, Taiwan and India [1]. In traditional systems of medicine, this herb has been used for treatment of diuretic, expectorant, antirheumatic, carminative as well as in infective hepatitis and other forms of liver diseases [2]. Many studies were carried out on the pungent constituents of fresh and dried ginger rhizomes. Among the pharmacological effects demonstrated are antiplatelets, antioxidant, anti-tumor, anti-rhino viral, anti-hepatotoxicity, anti-arthritic effect and anti-inflammatory [3-5]. The 6-Gingerol is an important active principle of plant which has been used as a marker compound for quality control and standardization of the plant and its formulations. Some analytical methods have been reported for the analysis of 6-gingerol in its extract, commercial formulations and biological fluids [6-7]. The two HPTLC methods were also developed on 6-gingerol indifferent formulations [8,9]. These methods are high performance liquid chromatography (HPLC) and used for analysis of 6-gingerol either in biological fluids or in its extract.

The objective of this study was, therefore, to develop a simple, economical, selective, precise, and reproducible high performance thin layer chromatographic (HPTLC) technique with Densitometric UV detection for analysis of 6-Gingerol in Z. officinalis extracts and in Laxiwin soft gel capsule formulation as per ICH guidelines [10]

The samples were spotted in the form of bands of width 6 mm with a Camag microliter syringe on precoated silica gel aluminium Plate 60F-254 (20 cm × 10 cm with 0.2 mm thickness, E. Merck, Germany) using a Camag Linomat 5 (Switzerland). A constant application rate of 200 nl/s was employed and space between two bands was 8 mm. The slit dimension was kept 6 mm × 0.45 mm micro, 20 mm/s scanning speed was employed. The mobile phase consisted of toluene: ethyl acetate (7:3 %, v/v). Linear ascending development was carried out in twin trough glass chamber saturated with mobile phase. The optimized chamber saturation time for mobile phase was 20 min at room temperature. The length of chromatogram run was approximately 75 mm. Subsequent to the development; TLC plate was dried in a current of air with the help of an air-dryer. Densitometric scanning was performed on Camag TLC scanner 3 in the absorbance mode at 254 nm. The source of radiation utilized was deuterium lamp.

Preparation Standard solution of 6-Gingerol: An accurately weighed quantity of 6-Gingerol (1mg) was dissolved in chloroform and sonicated for 5min. The volume was made up to 10mL with chloroform to give concentration of (100 ng/μL).

Preparation of test solution of formulation: An accurately weighed 500 mg of formulation dissolved in 8ml chloroform and refluxed for 30min. The solution is filtered through Whatman filter paper no.1. The volume was made up to 10ml with chloroform to give concentration of (50 μg/μl).

Stock solution of 6-Gingerol (100 ng/μL) was prepared in chloroform. From the stock solution, the 1.5 – 9 μL of standard solution of 6-Gingerol were applied on TLC plate. The plate was developed in a solvent system of toluene: ethyl acetate (7:3, v/v) at 25 ± 2°C temperature and 60 % ± 5 relative humidity up to a distance of 8cm, after development, the plates was heated for 7 min. in hot air oven at 105°c. Densitometric scanning was performed at 254 nm. The peak areas were recorded. Calibration curve was prepared by plotting peak areas vs concentration.

Precision of the method was determined as intra-day and inter-day variations by analyzing 320, 400, 480 ng/spot of standard 6-gingerol in triplicate on the same day for three times for the intra-day precision. Inter-day precision was determined by analyzing 320, 400, 480 ng/ spot of standard 6-gingerol in triplicate for three consecutive days. The percentage relative standard deviation (%RSD) of peak area was calculated.

Limit of detection and limit of quantitation

Determination of signal-to-noise ratio is performed by comparing measured signals from the sample with known low concentrations of analytes with blank solution (chloroform) and establishing the minimum concentration at which the analyte can be reliably detected. LOD was considered as 3:1 and LOQ as 10:1 (signal to noise ratio).

By introducing small changes in the proposed chromatographic conditions, the effects on the results were examined. The saturation time of development was varied by ± 5min. The distance of chromatogram run was varied by ± 5mm. The robustness of method was done at concentration levels 600 ng/spot of standard 6-Gingerol (n = 6). The results were expressed in terms of % RSD.

Accuracy of the proposed method was ascertained on the basis of recovery studies performed by standard addition method. Accurately measured amount of standards were added on the sample tracks on the plate in subsequently increasing concentration of 50ng/spot. The percent recovery as well as average percent recovery was calculated.

The specificity of the method was studied by analyzing standards, extracts and formulation by simultaneous application on the same plate. The spots of 6-Gingerol in the sample was confirmed by comparing RF value and spectra with respective standards. The peak purity was assessed by comparing the spectra at three different levels i.e. peak start, peak apex and peak end positions of the spot.

Quantification of 6-Gingerol in herbal extracts

The content of 6-Gingerol in herbal extract was determined by applying an appropriate volume of 6μL of standard solution respectively (n = 6). Then plate was developed and scanned as per proposed chromatographic conditions. The percentage content of 6-gingirol in plant extract was calculated.

Quantification of 6-Gingerol in pharmaceutical formulation

The TLC procedure was optimized with a view to develop method for simultaneous determination of 6-gingerol. The mobile phase toluene: ethyl acetate (7:3, v/v) gave good resolution, sharp and symmetrical peak with RF value of 0.33. It was observed that prewashing of TLC plates with methanol (followed by drying and activation) and presaturation of TLC chamber with mobile phase for 20 min ensure good reproducibility and peak shape of both the drugs.

Linearity: The linear regression data for the calibration curves showed good linear relationship over the concentration range 150-900 ng/spot. Linear regression equation was found to be Y = 4.103x+398.6 (r2 = 0.9981). The result is expressed in Table 1.

Precision: The precision of the developed HPTLC method was expressed in terms of % relative standard deviation (% R.S.D.). The results depicted revealed high precision of the method is presented in Table 2.

Repeatability: Ruggedness of the method was per-formed by applying 400ng by two different analyst keeping same experimental and environmental conditions. The % R.S.D was found to be 0.45.

LOD and LOQ: Detection limit and quantification limit was calculated by the method as described in Specificity. The LOQ and LOD were 24.13 ng and 63.83 ng. This indicates that adequate sensitivity of the method.

Accuracy: The proposed method when used for extraction and subsequent estimation of both the drug from pharmaceutical dosage forms after over spotting with 80, 100 and 120 % of additional drug; afforded recovery of 98.2 – 99.63 % as listed in Table 3.

Specificity: The identity of the bands in the sample was confirmed by comparing the RF with those of their respective standard [Figure: 1-3]. 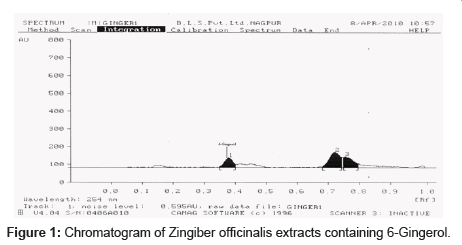 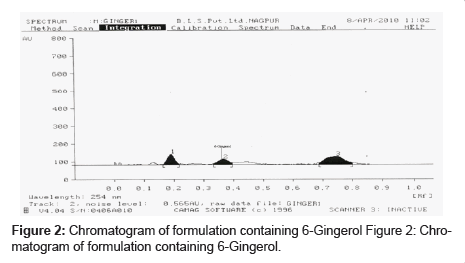 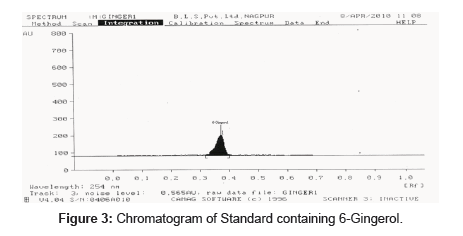 Quantitation of 6-gingerol in herbal extract

The percent content of 6-gingerol in the herbal extract was determined by applying the 6μL and the percentage content was found to be 96.83± 0.0055.

Quantitation of 6-gingerol in formulation

This densitometric HPTLC technique is quite simple, accurate, precise, reproducible, sensitive, and specific. HPTLC method has been developed for quantification of 6-Gingerol in Laxiwin soft gelatin capsule, a polyherbal formulation. The validation procedure confirms that this is an appropriate method for their quantification in the plant material and formulation. It is also used in routine quality control of the raw materials as well as formulations containing any or all of these compounds.

The authors are thankful to the Principal and management, R.C. Patel Institute of Pharmaceutical Education and Research, Shirpur (M.S.), India for providing the required facilities to carry out this research work.