Copyright: © 2012 Swartz KH, et al. This is an open-access article distributed under the terms of the Creative Commons Attribution License, which permits unrestricted use, distribution, and reproduction in any medium, provided the original author and source are credited.

Fascaplysin is a cytotoxic natural product isolated from a variety of Indo-Pacific marine organisms, primarily Fascaplysinopsis sponges and Didemnum tunicates. Positive xenograft studies involving this alkaloid structural class have indicated that fascaplysin may serve as an important lead compound for preclinical development. This study was undertaken as a prelude to a full pharmacokinetics and therapeutic assessment of fascaplysin. We describe here a simple plasma preparation and a rapid HPLC method for the detection of fascaplysin in mice. The method was validated by parameters including good linear correlation, a limit of quantification of 107.1 μg/mL, and a good precision with a coefficient of variation of 0.92% for 10 μg/mL. This method provides excellent sensitivity and visualization of fascaplysin as a single peak allowing for rapid analysis of plasma samples involving absorption, distribution, and metabolism studies. A preliminary pharmacokinetics study in C57Bl/6 mice using 20.6 mg/kg fascaplysin yielded a biphasic curve with T½α=16.7 min, T½β=11.7 h, and C0 of 17.1 μg/mL.

Fascaplysin (1), a pigment first reported in 1988 from the marine sponge Fascaplysinopsis [1], is the parent compound of a uniquely marine-derived structural class (Figure 1). Most members of this family possess a framework consisting of a planar, fused-pentacyclic alkaloid often as a quaternary salt. To date 27 analogs of fascaplysin (1) have been reported [2-9] and several studies have described a broad range of bioactivity properties for this class including antiangiogenesis [10], antibacterial [1], antimalarial [11] and cytotoxicity against various cancer cell lines [1-3,6,9]. A few specific targets for these biological activities have been defined, including DNA binding (possibly intercalation) [12] as well as inhibition of Cdk4 kinase [13], the latter leading to G1 phase arrest and apoptosis [14]. Our interest in the fascaplysin family is a consequence of their in vitro solid tumor selectivity, which we have noted for the parent compound 1 and analogs such as 3- and 10-bromo fascaplysin, compounds 3 and 4 respectively, as well as fascaplysin A (2) [2,3]. Our recent studies using fascaplysin A (2) demonstrated its in vivo therapeutic efficacy in a xenograft model [15]; thereby making this class of compounds ideal candidates for further preclinical development and eventual clinical trials. 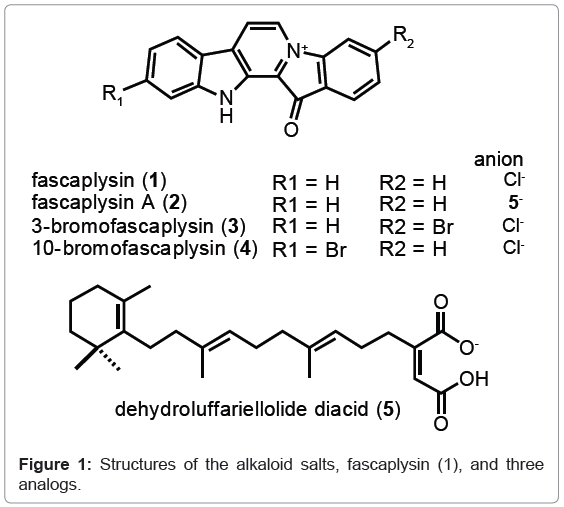 Figure 1: Structures of the alkaloid salts, fascaplysin (1), and three analogs.

The natural history associated with the occurrence of fascaplysin (1) is somewhat unusual. It has been isolated from four different Indo- Pacific sponge species, all belonging to the Thorectidae, including Fascaplysinopsis reticulata, F. sp., Hyrtios cf. erecta, and a partially classified Thorectandra. Analogs have also been isolated from two distinct Didemnum tunicates [2]. The circumstance of this compound being observed from multiple marine invertebrates in different marine phyla is noteworthy and currently remains unexplained though parallel biosynthetic machinery obviously exists in these biosynthetically disparate taxa. Coincidentally, the isolated yields of fascaplysin analogs reported from sponges and tunicates are high, suggesting that the biosynthetic enzymes are robustly independent of invertebrate phyla or taxonomic species [3]. The circumstance of having multiple natural sources for a variety of fascaplysins greatly facilitates the next steps in the pre-clinical evaluation of this class. Alternatively, these compounds are also available from total synthesis [16-22], which if warranted could be used to supply material for therapeutic evaluations. At this juncture, the next step in the therapeutic evaluation of the fascaplysin class consists of a rigorous pharmacokinetics assessment followed by careful in vivo bioactivity studies. We describe below a validated method to determine fascaplysin (1) concentration and stability in mouse plasma. The process consists of a simple extraction of plasma samples followed by isocratic HPLC analysis with UV detection of 1.

Mouse blood samples were collected by cardiac puncture using a 1mL syringe (with a 25-gauge needle) containing heparin as anticoagulant. Once the maximum amount of blood was collected, it was transferred to a 1.5 mL conical centrifuge tube and centrifuged at 14,000 rpm (equivalent to 19,000 g) at 4°C for 15 min to separate plasma and RBC. Plasma and RBC were separately transferred and stored in a freezer at -20°C. To prepare individual spiked standards, 20 μL of fascaplysin stock solutions in water were added to 230 μL of plasma samples, 500 μL of methanol was added to each, inverted and vortexed for 1 min, and centrifuged at 19,000 g at 4°C for 30 min. The supernatant was added to 2.0 ml of water and the mixture was passed through a Sep-Pak® Vac 1 cc (100 mg) C8 cartridge. Fascaplysin (1) was eluted with 1.0 mL of methanol and evaporated to dryness using an Eppendorf Vacufuge® at 45°C. 100 μL of mobile phase buffer was added to each sample. The same procedure was used to prepare RBC samples for HPLC analysis.

Fascaplysin (1) in the eluted fraction was determined using a Waters SymmetryShield RP18 reversed-phase column (3.9×150 mm) with a 5 μm particle size. The injection volume was 70 μL. The column oven was room temperature. The mobile phase was phosphoric acid/methanol/water (1/20/79 v/v/v) at a flow rate of 1.0 mL/min. Detection was done at 302 nm. The results of the analysis are expressed in nanograms of fascaplysin (1) per mL of plasma.

A stock solution of 20 μg/mL of fascaplysin (1) was prepared in water. The calibration curve was obtained with mouse plasma spiked with known amounts of the stock solution. The analyte was extracted according to the protocol described above. The calibration curve was obtained by plotting the peak area of fascaplysin (1) against its concentration in 7 spiked plasma standards (20, 10, 1, 0.5, 0.25, 0.1, and 0.05 μg/ml) and performing a linear regression analysis.

Fascaplysin (1) was administered i.v. to C57Bl/6 female mice at 20.6 mg/kg in a volume of 0.25 mL saline, containing 5% DMSO and 5% Cremophor/Propylene glycol (60/40, v/v); two animals per time point were sacrificed at 5 min., 0.5, 1, 2, 4, and 24 hr after drug administration. Blood samples were collected and analyzed as described above. Animal treatment was in full accordance with the Institutional Animal Care and Use Committee (IACUC) Guidelines for the care and management of laboratory animals.

The data gathered allows detection of fascaplysin (1) over a wide range of concentrations. The method developed here was validated according to the U.S. Pharmacopoeia [23] and the analytical performance parameters considered were selectivity, linearity, accuracy, precision, sensitivity, ruggedness, and peak symmetry [24].

Somewhat similar to a past study [25], seven parameters are used to validate the method and the analytical details are as follows:

The absorption spectrum for fascaplysin (1) (Figure 2) demonstrated the potential wavelength for quantitative analysis: 263.4, 302.6, and 408.8 nm. In all further studies, 302 nm was chosen. A typical chromatogram at 302 nm (Figure 3) for spiked plasma indicated that fascaplysin (1) was well-resolved and free from interference peaks. The use of a UV photodiode array detector allowed the confirmation of the identity of the chromatographic peak for fascaplysin (1) both by its retention time and UV spectrum. 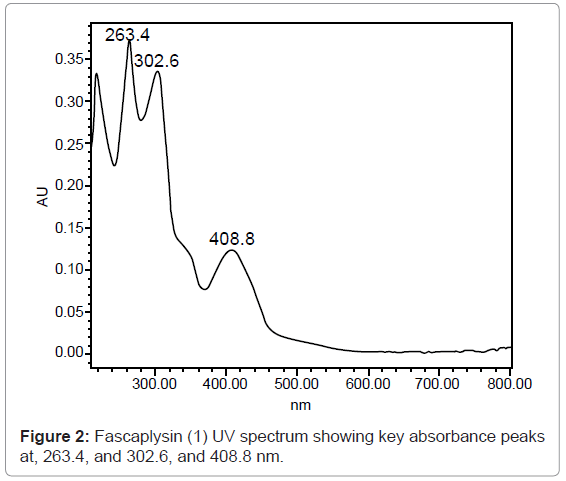 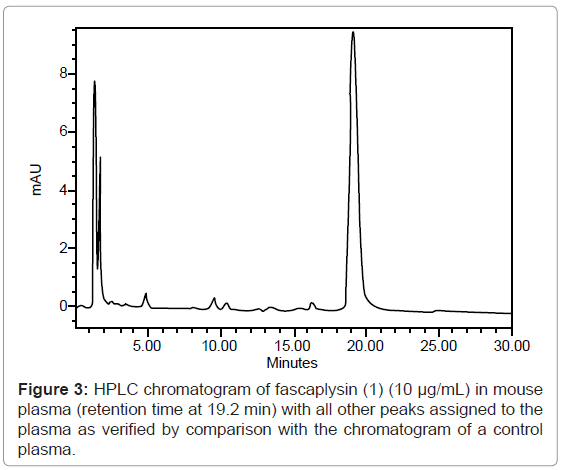 Figure 3: HPLC chromatogram of fascaplysin (1) (10 μg/mL) in mouse plasma (retention time at 19.2 min) with all other peaks assigned to the plasma as verified by comparison with the chromatogram of a control plasma.

Calibration curves of fascaplysin (1) were prepared to determine the linearity of the method over the range of 50-20,000 ng/mL. Integrated peak areas were plotted against analyte concentration, and linear regression was performed by the least-squares method. The calibration curve generated using plasma as matrix showed a square of correlation coefficient of 0.998 (Figure 4). 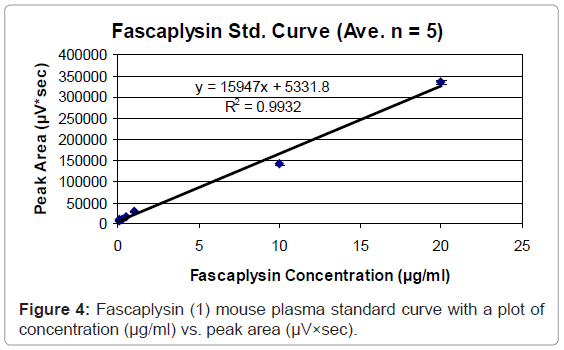 The accuracy of the analytical method was determined by application of the method to analytes of known concentrations. Three spiked plasma samples (0.25, 10 and 20 μg/ml were prepared in triplicate and analyzed. The assay results were 0.253, 9.82, and 20.01 ng/mL, indicating a recovery of 100.4%, 98.2%, and 101.2%, respectively for these samples. Therefore, the method is accurate (Table 1).

The precision of the analytical method was determined by analyzing a plasma sample spiked with 10 μg/ml of fascaplysin (1) injected ten times. Peak areas were considered for the determination. The precision, expressed as the percent coefficient of variation (CV), was 0.92% indicating that the method is precise (Table 2) [26].

Ruggedness was shown by assaying 3 replicates of spiked plasma samples using 3 fascaplysin (1) concentrations on two consecutive days employing the corresponding linearity curve generated on the day the sample was assayed. As shown in (Table 3), intra- and inter-day assay results of a particular sample are essentially the same, indicating an acceptable ruggedness of the method for intra- and inter-day assay studies. In addition, three spiked samples (100, 250, and 500 ng/mL) were analyzed using slightly modified flow rates. As shown in (Table 4), when the flow rate was reduced or increased to 0.9 or 1.1 mL/min, respectively, as compared to the normal 1mL/min. The assay results showed CV values of 2.1%, 2.0%, and 0.6%, further indicating that the present method is rugged with respect to minor changes of the flow rate.

Table 3: Assay of a fascaplysin (1) standard sample over a period of 2 days.

Table 5: Slopes and y-intercepts of five standard curves used to compute the LOD and LOQ.

Tailing factor is defined as the distance from the front slope of the peak to the back slope (AB) divided by twice the distance from the center line of the peak to the front slope (2AC), with all measurements made at 5% of the maximum peak height [23] (Figure 5). The tailing factor computed for the fascaplysin peak (250 μg/mL) equals 1.08 indicating that the peak symmetry is good. 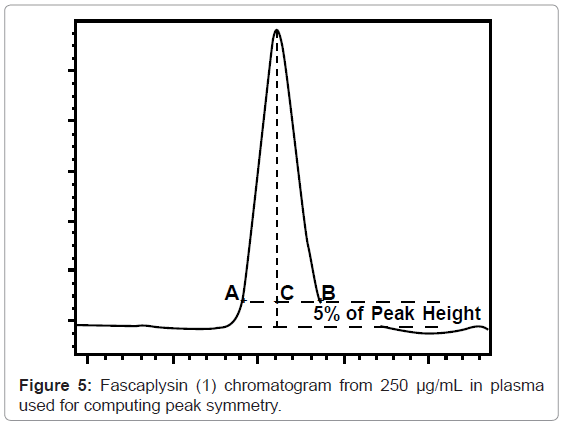 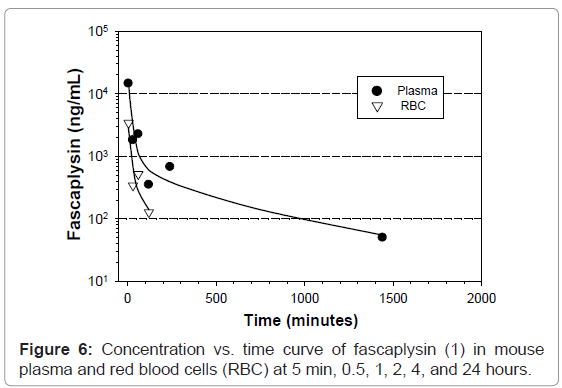