Copyright: © 2011 Maithani M, et al. This is an open-access article distributed under the terms of the Creative Commons Attribution License, which permits unrestricted use, distribution, and reproduction in any medium, provided the original author and source are credited.

The study describes development and subsequent validation of a stability indicating reverse-phase high- performance liquid chromatography method for the simultaneous estimation of salbutamol sulphate and theophylline in tablet dosage forms. A reversed-phase phenomenax C-18 column (250 mm × 8 mm i.d., particle size 10 μm) column with mobile phase consisting of acetonitrile and phosphate buffer 65:35 (v/v) (pH 4.2 ± 0.02, adjusted with triethylamine) was used. The flow rate was 1.2 mL min -1 and effluents were monitored at 235 nm. The retention times (t R ) of salbutamol sulphate and theophylline were found to be 5.33 min and 13.36 min, respectively. The method was validated in terms of linearity, range, specificity, accuracy, precision, limit of detection (LOD) and limit of quantitation (LOQ). The linearity for both the drugs was found in the range of 2-64 μg mL -1 . The % recoveries of salbutamol sulphate and theophylline were found to be 99.41 and 101.11, respectively. The utility of the procedure is verified by its application to marketed formulations that were subjected to accelerated degradation studies. The method distinctly separated the drug and degradation products even in actual samples. The products formed in marketed tablet dosage forms are similar to those formed during stress studies.

Salbutamol sulphate (SS) chemically, 4-[2-(tert-butylamino)-1- hydroxyethyl] - 2- (hydroxymethyl) phenol; sulfuric acid is a short acting β2-adrenergic receptor agonist used for the relief of broncho-spasm in conditions such as asthma and chronic obstructive pulmonary disease. Theophylline (TP) chemically, 1, 3-dimethyl-7H-purine-2, 6-dione also known as dimethylxanthine, is a methylxanthine drug used in respiratory diseases such as COPD and asthma [1-4]. The structures of SS and TP are shown in Figure 1. Numerous UV, HPLC, GC and HPTLC based methods have been reported for estimation of these drugs alone as well as in combination with other drugs in pharmaceutical dosage forms [5-24]. But no stability-indicating assay method has been reported for the simultaneous determination of SS and TP in the presence of their degradants using the ICH approach of stress testing. Therefore, the present work was aimed to develop a simple, rapid, precise, and accurate isocratic reversed-phase stability indicating HPLC method for simultaneous determination of SS and TP in the tablet dosage form. Stress testing under various conditions like hydrolysis (i.e., acid, base, and water), oxidation, heat, and photolytic degradation was carried out as per ICH guidelines [25-28]. Validation of developed analytical method was carried out as per ICH guidelines [29].

Figure 1: The structures of salbutamol sulphate (SS) and theophylline (TP).

The isocratic mobile phase was consisted of acetonitrile and phosphate buffer 65:35 (v/v) (pH 4.2 ± 0.02, adjusted with triethylamine). The mobile phase was sonicated for 30 min and filtered through a 0.45 µ membrane filter paper. Flow rate of mobile phase was 1.2 mL min-1. The variable wavelength UV-visible detector was set at 235 nm. All analyses were performed at ambient temperature.

50 mg SS and 50 mg TP were accurately weighed and transferred to 100 mL volumetric flasks separately and dissolved in the mobile phase to give stock solutions of 500 µg mL-1 each of SS and TP.

Twenty tablets (Theo Asthalin Forte, Cipla Pharmaceuticals, India) were weighed and powdered finely. Tablet powder equivalent to 4 mg of SS and 200 mg of TP was transferred to a 100 mL volumetric flask and dissolved in 50 mL of mobile phase. The solution was ultrasonicated for 30 min and filtered through 0.45 micron membrane filter. The solutions were further diluted with mobile phase to obtain concentration of 2 µg mL-1of SS and 100 µg mL-1 of TP and were subjected to HPLC analysis as described earlier. From the peak area of SS and TP, the amount of drugs in samples was computed.

From the previously mentioned stock solutions of standard drug and sample, 5 mL of aliquots were diluted separately up to 10 mL with 3% H2O2 (v/v), distilled water, 0.1 M HCl, and 0.1 M NaOH to achieve a concentration of 50 µg mL-1 and 100 µg mL-1 each of SS and TP, respectively. Solutions in water, 0.1M HCl, and 0.1M NaOH were heated at 80°C for 24 h. For oxidative degradation, drugs were stored at room temperature (RT) in 3% H2O2 (v/v) for 48 h. Degradation was also carried out in solid state by exposing pure drugs and drug product to dry heat at 80°C for 48 h. Photolytic studies were carried out by exposing a thin layer of solid SS and TP and their packaged (blister strip) and loose (removed from the blister pack) tablets placed in a Petri-dish as well as the solutions of drugs and samples in 0.1 M HCl, 0.1 M NaOH, and water to light in the photostability chamber for 30 days. Suitable controls were maintained under dark conditions. Samples were withdrawn initially and subsequently at prefixed time intervals. Samples were neutralized by either acid or alkali and were diluted with mobile phase to yield starting concentrations of 50 µg mL-1 and 100 µg mL-1 each of SS and TP, respectively. Appropriate blanks were injected before analysis of forced degraded samples.

Specificity was tested against standard compounds and against potential interferences in the presence of placebo. No interference was detected at the retention time of SS and TP in sample solution.

Linearity is studied to determine the range over which analyte response is a linear function of concentration. This study was performed by preparing standard solutions at seven different concentrations and analyses were performed in triplicate. The responses were measured as peak area. The calibration curves were obtained by plotting peak area against concentration.

The accuracy of an analytical method is the closeness of results obtained by that method to the true value for the sample. It is expressed as recovery (%), which is determined by the standard addition method. Samples were spiked with 80, 100, and 120% of the standard and analyzed. The experiment was performed in triplicate. Recovery (%) and RSD (%) were calculated for each concentration.

Limits of detection and limit of quantitation

Linearity and range: Seven different concentrations (2, 4, 8, 16, 32, 48 and 64 µg mL-1) of the mixture of two drugs were prepared for linearity studies. A typical HPLC chromatogram obtained during simultaneous determination of SS and TP is given in Figure 2. The calibration curves obtained by plotting peak area against concentration showed linear relationship over a concentration range of 2-64 µg mL-1 for both the drugs. The linear regression equations for SS and TP were found to be y = 6191.4x + 3064.7 and y = 6370.7x - 1993.7, respectively. The regression coefficient values (R2) were found to be 0.9999 and 0.9996, respectively indicating a high degree of linearity. Calibration curves of SS and TP are shown in Figure 3. Regression characteristics of the proposed HPLC method are given in Table 1. 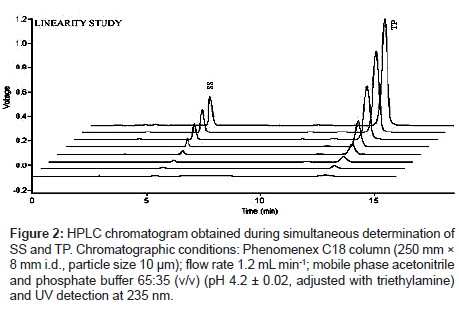 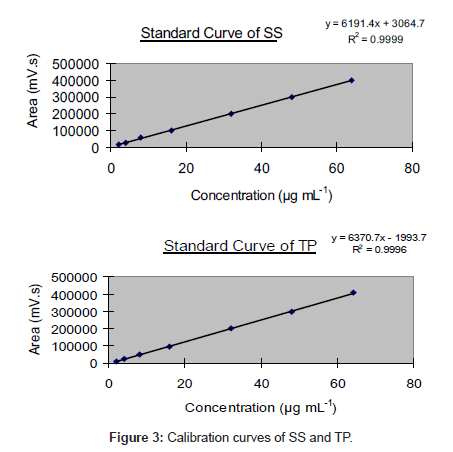 Specificity: The specificity studies proved the absence of interference, since none of the peaks appeared at the retention time of SS and TP. The interaction study in standard solution was also carried out by comparing peak of each drug individually and in drug mixture.

Precision: From the standard stock solutions, mixed standards containing SS and TP were prepared. Standard solutions (n=3) were injected using a universal rheodyne injector with injection volume of 20 µL. The intra-day and inter-day precisions were assessed by analyzing standard solutions. The % RSD was found to be between 0.42 and 0.38 for both the drugs. The lower values of % RSD indicate that the method is precise.

Accuracy: Recovery studies were carried out by applying the standard addition method. Known amounts of standard SS and TP corresponding to 80%, 100%, and 120% of the label claim were added to sample of tablet dosage form separately. The average % recoveries for SS and TP in marketed formulation were found to be 99.41 and 101.11, respectively. The results revealed that there was no interference of excipients. The results of accuracy are shown in Table 2. Neutral (water) conditions: In neutral condition, SS was found to be relatively stable. Upon heating the drug solution in water at 80°C for 24 h, only minor degradation product at tR 7.62min was formed. On further heating up to 48 h, there was no rise in the proportion of the already degraded peaks. On the other hand, 10-15% degradation of TP was seen after heating for 24 h at 80°C with the generation of three minor peaks at around 6.52, 10.08, and 11.11min Figure 4C.

Photolytic conditions: Mild decomposition was seen on exposure of SS and TP solid drug powder and their tablets to light in the photo stability chamber. The photolytic exposure (30 days) of SS in 0.1M HCl and 0.1M NaOH resulted in 45% and 12% degradation, respectively. On the other hand standard TP and its tablet were found to be more stable under acidic photolytic stress conditions, resulting in 25% decomposition. SS and TP API and the pharmaceutical tablets were found to be sufficiently stable under neutral photolytic degradation conditions. The major degradation peaks of TP appeared at tR 9.08 and 11.11 min while degradation peak was found at 7.62 min for the SS Figure 4F.

The developed method was successfully applied to analyze SS and TP in marketed tablet formulations. A clear separation of the drugs and degradation products was achieved in tablet with no interference from excipients Figure 5. Analysis of marketed tablets (Theo Asthalin Forte, Cipla Pharmaceuticals, India) was carried out using optimized mobile phase and HPLC conditions. The average % drug content of tablets obtained by the proposed method for SS and TP were found to be 99.85 and 100.75 respectively, which showed that the estimation of dosage forms was accurate within the acceptance level of 95% to 105%. The results are given in the Table 3.

For system suitability parameters, seven replicate injections of mixed standard solution were injected and parameters such as the resolution, capacity factor, tailing factor, theoretical plate, retention volume and asymmetry factor of the peaks were calculated. The results are shown in Table 4.

The present study envisages the stability behavior of SS and TP individually and in combination as per the ICH guidelines. TP was found to be more susceptible under stress conditions in comparison to SS. The method was found to be accurate and precise with good and consistent recoveries at all levels studied. The good % recovery in tablet forms suggests that the excipients present in the dosage forms have no interference in the determination. The %RSD was also less than 2% showing high degree of precision of the proposed method. In addition, simple isocratic elution and easy extraction procedure offered rapid and cost-effective analysis of SS and TP. The proposed method can be used for routine analysis of SS and TP in combined dosage form. It can be also used in the quality control in bulk manufacturing.

The authors are grateful to Torrent Pharmaceutical (Gandhinagar, India) for providing gift samples of SS and TP.