Differences and Similarities in the Metabolism of Glyburide for Various Species: An Analysis by LC-DAD-Q-TRAP-MS/MS

Copyright: © 2013 Ravindran S, et al. This is an open-access article distributed under the terms of the Creative Commons Attribution License, which permits unrestricted use, distribution, and reproduction in any medium, provided the riginal author and source are credited.

In order to understand the similarities and differences in drug metabolism studies, we have designed an experiment using glyburide as a model system. Glyburide was incubated with hepatic microsomes from human, mouse, rat, dog and monkey individually. Metabolites were identified and drug to metabolite ratio was used as a semiquantitative method to calculate the amount of metabolite formed with respect to the parent drug. This helps in comparing the amounts of metabolites formed in different species such as rat, mouse, dog, monkey and human.

Metabolism of a drug by liver microsomes

The NADPH dependent metabolism of glyburide was studied in microsomal mixtures containing the following components at their respective final concentrations: glyburide, 15 μM; microsomal protein, 1 mg/ml; 0.1 M potassium phosphate (pH 7.4). After 5 minute pre incubation at 37°C in a shaking water bath, the reaction was initiated by the addition of 1 mM NADPH. The reaction was incubated for 30 min at 37°C and was terminated by the addition of ice cold acetonitrile. Samples were centrifuged at 15,000 g for 15 min at 5°C and the pellets were discarded. 50 μl was transferred to HPLC vials and subjected to analysis. Blank incubations were carried out with all the components except NADPH.

Chromatographic separation of drug and metabolites was achieved using a Zorbax 300 SB C18 column (150×4.6 mm, 5 μ); the column temperature was maintained at 40°C. The mobile phase consisted of acetonitrile (solvent A) and water containing 0.1% formic acid (solvent B). The constant flow rate was set at 0.4 ml/min for the whole run time. Solvent delivery module in Agilent is utilized to produce the following gradient. The gradient elution is as follows: 5% solvent A for 2.5 min, followed by 5-90% solvent A in 21.5 min and held at 90% solvent A for another 2.5 min. Electrospray ionization source (ESI) serves as an interface and directs the solvent eluted from the HPLC in to the Q-Trap spectrometer.

The primary in vitro glyburide metabolites were identified using Q-TRAP-MS/MS (API4000 Q-TRAP-MS/MS, AB Sciex) with electro spray ionization (ESI) source operated in positive ion mode. Enhanced mass scan (EMS) and Enhanced product ion (EPI) scans were used to elucidate the structure of metabolites. The mass chromatograms (Extracted Ion Current at respective masses such as m/z 510, m/z 412 etc) obtained from EMS-EPI scans were helpful to confirm the corresponding peaks in the spectrum obtained from diode array detector (DAD). The LC/MS/MS parameters used are as follows, Curtain gas was set to 26 Psi and collisonally activated dissociation gas was set to medium. Ion spray voltage was 5400 V and Ion source temperature was 500°C. Nebulizer gas and turbo gas was 55 psi and 60 psi respectively. Decluster potential was 105 V, Collision energy for EMS scan was 9V and EPI scan was 36 V with a collision energy spread of 10.

LC-DAD chromatogram for glyburide and its metabolites Mass chromatograms for glyburide and its metabolites

Metabolite owing to ring loss was also observed for all the species. Molecular mass of ring loss metabolite is 412 amu. Extracted ion current at m/z 412 for human and mouse is shown in figure 3. Identification of metabolites in mass spectrum confirms and complements the results obtained from the DAD chromatogram.

Intensities of the peaks detected in mass chromatograms are different from the intensities of the peaks observed in LC-DAD spectrum. This difference is due to the differences in the ionization efficiency of metabolites in the mass spectrum. DAD chromatograms are not influenced by the ionization efficiency of compounds and therefore are utilized to quantify the metabolites in the absence of synthetic standards.

Quantitation of glyburide and metabolites in human, mouse, rat, dog and monkey based on LC-DAD data

Table 1: Percentage of metabolites identified after 30 min incubation of glyburide with liver micrsomes from human, mouse, rat, dog and monkey. Drug to metabolite ratio after 30 min is calculated by considering glyburide in zero minute samples as one hundred percent. Incubation and analysis was done in triplicate and the results are within the statistical error limit (P<0.05).

During the pre-clinical development of drugs, animal models are used to predict the metabolic pathway of drugs in human. Enzymes CYP 450’s (Cytochrome P450) play an important role in the metabolism and pharmacokinetics of drugs in both humans and animals. Humans differ from animals with respect to catalytic activity of CYP450 enzymes. Isoform composition and expression of enzymes also differ from humans to animals. Isoforms of CYP1A, CYP2C, CYP2D, CYP3A and CYP2E are responsible for metabolism of majority of the drugs in the market. All these enzymes are expressed in human, monkey, dog, rat and mouse. However there are differences in the primary amino acid sequences of the cytochrome P450s across the species resulting in different catalytic activity and drug specificity [8,9].

In the present study, Liquid Chromatography coupled with DAD detector coupled to Q-TRAP-MS/MS is utilized to analyze the formed metabolites (Figures 4-8) and its quantity. In our recent studies, we have identified the new metabolites of glyburide in human [5,6]. In the previous studies authentic standards of monohydroxylated metabolites were utilized to confirm the formed metabolites from hepatic and placental microsomes of human and baboon [4]. Various scan modes in mass spectrometry and the fragmentation pattern obtained from the mass spectrum was also used to confirm the formed metabolites [5,6]. In the present study glyburide was incubated with hepatic microsomes from various species such as mouse, rat, dog, monkey and the obtained results are compared with the human. Figures 4-7 shows the extracted ion chromatogram and corresponding product ion spectrum for molecular masses m/z 510 (mono-oxygenation), m/z 412 (loss of cyclohexyl ring), m/z 526 (di-oxygenation) and m/z 508 (mono oxygenation and dehydrogenation). The chromatograms (Figures 4-7) are obtained by incubation of glyburide with mouse liver microsomes. Detailed structural elucidation of these metabolites was carried out in the previous studies using human liver microsomes as a matrix [4-6]. Chromatograms obtained from the DAD detector is used to quantify the metabolites [7] formed in the system. Area o btained from the total ion chromatogram and extracted ion chromatograms from mass detector are influenced by the ionization efficiency of the drug and metabolites. Area obtained from the chromatogram of DAD detector which is not influenced by the ionizing efficiency of the compound is utilized to quantify the drug, metabolites from the drug metabolite ratio. Mass detector has been used to identify and confirm the structure of the metabolites (Figures 4-8) and DAD detector for quantifying the drug and metabolites present in the system. 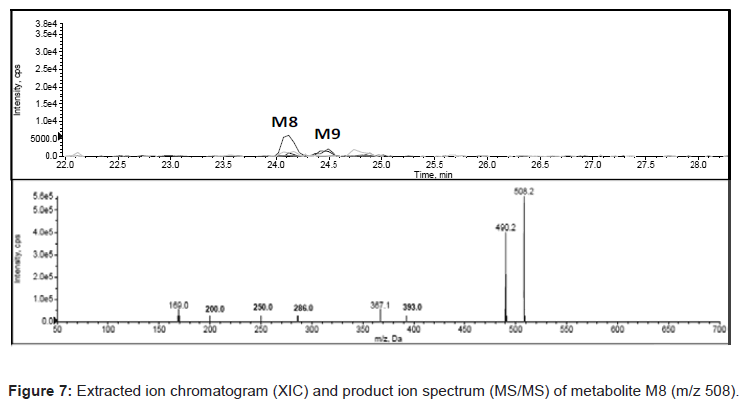 Similarities in the metabolism of drug among different species

Sulfonylurea drug glyburide upon incubation with hepatic microsomes from human, monkey, dog, rat and mouse resulted in the formation of metabolites (Figures 1 and 2). In the case of human, mouse, rat, dog and monkey all the monohydroxylated metabolites (M1, M2a, M2b, M3, M4 and M5) were identified.

In our recent studies, details of the identification of these metabolites are discussed in detail [6]. These similarities in the formation of monohydroxylated metabolites and metabolite due to ring loss in all the species suggests that major enzymes CYP1A, CYP2C, CYP2D, CYP3A and CYP2E could be involved in the metabolism of glyburide.

Differences in the metabolism of glyburide among different species

Species resembling human in the metabolism of the sulfonylurea drug glyburide

Thus, from the above drug metabolism study by LC-DAD-Q-TRAP-MS/MS it is clear that a mouse which is a small animal and monkey as a larger animal could be the most appropriate species to conduct various biological studies for glyburide. Conducting necessary studies on these species will be very edifying and safe before subjecting the drugs for clinical trials on humans.

Glyburide is extensively metabolized in human liver microsomes where cyclohexyl hydroxylated metabolites are predominantly found with respect to the parent and the other metabolites. Results from LC-DAD detector and Q-TRAP-MS/MS complement each other and confirm the metabolite formation. Liquid chromatography with DAD detector coupled to Q-Trap-MS/MS has been utilized to obtain drug to metabolite ratio for human, mouse, rat, dog and monkey. DAD spectra were used to quantify the metabolites formed with respect to that of the parent. Drug to metabolite ratio confirms that mouse and monkey resembled the glyburide metabolism in human. Mouse could be an ideal rodent species and monkey would be a non-rodent species to perform pharmacological and toxicological studies for glyburide.