Copyright: © 2010 Fayyad MK, et al. This is an open-access article distributed under the terms of the Creative Commons Attribution License, which permits unrestricted use, distribution, and reproduction in any medium, provided the original author and source are credited.

Robustness of an analytical chromatographic method for separation of cystatin c has been veri fi ed. Changes in many parameters were carried out, such as, wavelength, column oven, mobile phase composition, chromatographic column.

Imperative changes have altered the ef fi ciency of the chromatographic separation; such changes include pH alteration of the mobile phase as well as alkyl sulfonate molarity changing.

All robustness conditions showed no major effect on the chromatographic separation of the analyte except with the changes related to TFA and alkyl sulfonate ion pair reagents. Peak area RSD, asymmetry and No. of theoretical plates were < 0.7%, < 1.2 and > 10,000, respectively. Results obtained using mobile phase after 6 months of storage have proven its stability and possibility of use. Gradient elution mode was utilized to elute cystatin c with a UV detection of 224 nm. Ace and Waters C8 (150 x 4.6 mm i.d., 5 μ m) as chromatographic columns were used.

Cystatin C (CC) is composed of 120 amino acid residues with a molecular weight of about 14 KDa and two intra-chain disulfide bonds. CC has an isoelectric point (PI) equal to 9.2; accordingly, and due to protonation of the acid group it has a positive charge at physiological pH. [1-5].

Two ion pair reagents were included in the mobile phase. CC has a leader hydrophobic sequence which enhances the binding with the hydrophobic surface of the stationary phase. 1-hexane sulfonic acid sodium salt reagent was used to bind with the stationary phase instead of the analyte [5]. To accomplish an efficient separation, using of both ion pair reagents is deemed necessary. Typical working concentrations of both reagents were incorporated in the mobile phases [6].

Different factors render the use of TFA, it has low volatility at low pH values (in the present work pH 2.4), it sharpens the peak shape where the ionic interaction chance between the silanol groups of the stationary phase and CC is reduced and finally it has a low absorption at the working wavelength.

Organic modifiers can also compete with the ion pair for the stationary phase and then decreasing the effective capacity of the column. [7-9].

Mobile phase has been stored at 25°C for six months. RSD were determined from 5 consecutive injections of calibration urine containing CC at its pathological concentration

It is defined as per the ICH Guideline Q2 (R1) [11], a measure of the method to remain unaffected by deliberate changes in the parameters of the method.

Eight chromatography parameters were altered; these parameters were found to contribute significantly to the method: acetonitrile and methanol content in the mobile phases, column oven temperature, wavelength, TFA and 1-hexan sulfonic acid sodium salt content in the mobile phases which corresponds to the pH value and the buffer molarity, respectively. Chromatographic column from another supplier with the same specification, in addition, to another alkyl sulfonic acid sodium salt ion pair reagent were also used. Analysis was carried out using a calibration urine containing CC at its pathological concentration (Table 1).

Close retention time of CC peak, RSD < 0.7%, No. of theoretical plates was > 10,000 and the asymmetry factor was < 1.2, all prove the stability of mobile phase after six months of room temperature storage. (Table 2).

No. of theoretical plates, asymmetry factors, RSD of peak areas and retention times were used to evaluate the effects on the qualitative responses (Table 3-6).

No major changes were observed as a result of the alterations made except when TFA and alkyl sulfonate ion pair reagents were eliminated from the mobile phases (Figure 1-3). 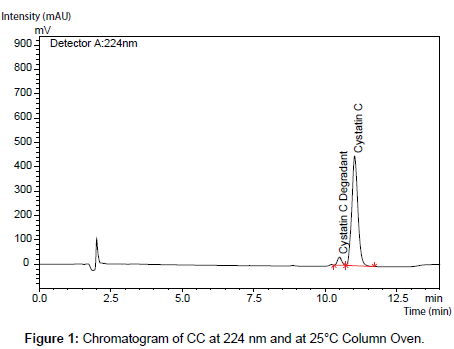 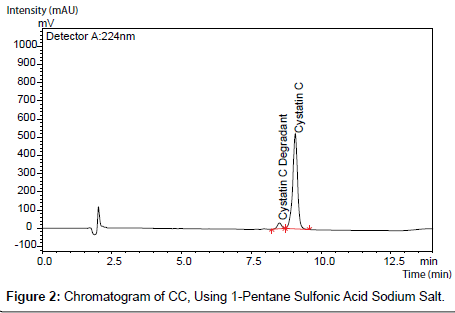 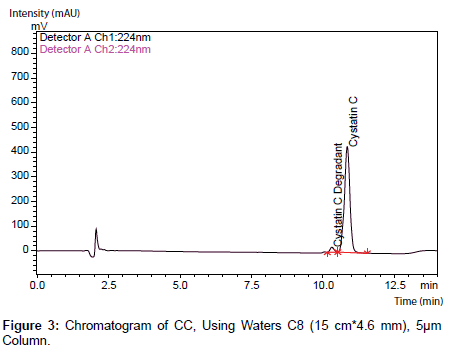 Alteration of organic modifiers content (acetonitrile and methanol) has affected only the retention time of CC peak. Nevertheless, the obtained RSD values for CC peak area did not exceed 0.6% (Figure 4,5) (Table 7,8). 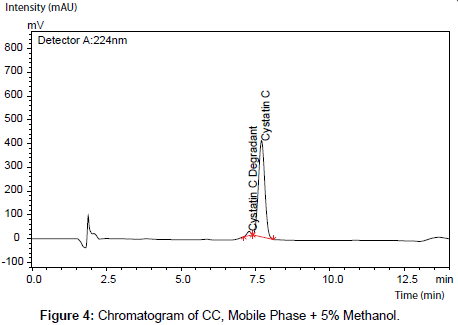 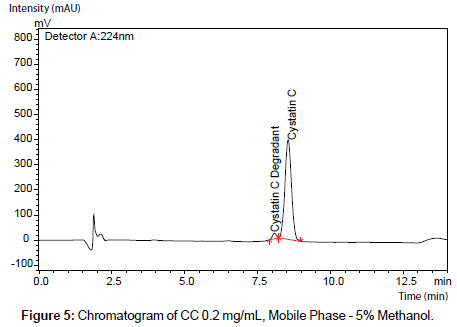 Interestingly, CC peak was distorted when no TFA is added to the mobile phase and the peak area of CC was reduced by about 67%. This phenomenon can be attributed to the silanol groups in the stationary phase that have been activated as a result of high pH value (7.0). Moreover, CC protein might dissociate at high pH values due to denaturation process. [6,12]. 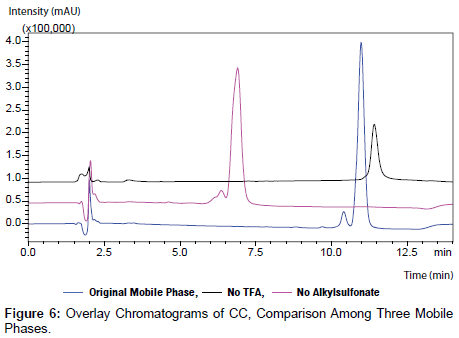 The present study has investigated the effect of varying some of the chromatography parameters of the previously developed and validated HPLC method. The obtained results proved the robustness of the method in addition to the stability of the mobile phase. According to the obtained results, the presence of the both ion pair reagents, TFA and the alkyl sulfonate, is extremely important to achieve the maximum separation and sensitivity.

Financial support has been furnished by Hikma Pharmaceuticals-Amman.