Copyright: © 2013 Latif M. This is an open-access article distributed under the terms of the Creative Commons Attribution License, which permits unrestricted use, distribution, and reproduction in any medium, provided the original author and source are credited.

Background: Splenic cysts are rare lesions with around 800 cases reported in the world literature but splenic cyst associated with hypersplenism is very rare and only few cases have been reported in world literature. They have been classified as “true” or “pseudo” cysts based on the presence or absence of an epithelial lining. Methods: We report a case of giant true splenic cyst. A 29 year old Saudi woman presented with one year history of abdominal pain and a sensation of fullness in her left upper abdomen. She gave a vague history of abdominal trauma one year back. Abdominal Computed tomography revealed a giant splenic cyst almost replacing the splenic parenchyma and abutting the splenic hilum. Laboratory tests revealed a picture of hypersplenism. Results: She was treated successfully by laparoscopic splenectomy. The pathological examination confirmed a true cyst with epithelial lining. Postoperative recovery was uneventful, and the blood count returned to normal. Conclusion: Laparoscopic splenectomy is effective method of management for such cyst involving the hilar region of the spleen or replacing almost the splenic parenchyma.

Splenic cysts have been classified as “true” or “pseudo” cysts based on the presence or absence of an epithelial lining. True cysts have a cellular lining that can be caused by congenital events or parasitic infection (Echinococcus). Pseudocysts have no cellular lining and may be of hemorrhagic, serous, inflammatory, or degenerative origin. The congenital nonparasitic cysts of the spleen are rarely met in the clinical practice, and it constitutes approximately 10% of all splenic cysts [1]. They are also called true, congenital, epidermoid or epithelial cysts. We present a case of the giant epithelial cyst of the spleen, which was diagnosed before surgery as pseudocys

A 29-year-old Saudi woman presented to our clinic with one year history of a progressively painful lump and sensation of fullness in the left upper quadrant of the abdomen which increase mainly among the last 3-months. A vague history of trauma to abdomen was present. On examination, she had pallor and all vital parameters were stable. In the area of the left hypochondrium, a mass measuring 10-15 cm with smooth surface and cystic consistency was palpated. The laboratory investigations showed picture of thrombocytopenia (81×103), leuopenia (2.6×103) and anaemia (Hb=8.2 gm%). Peripheral smear showed pancytopenia and a reticulocyte count of 2.5%. Bone marrow was hypercellular with erythroid hyperplasia. Echinococcus IgG antibody was negative and upper G.I. endoscopy did not show any evidence of portal hypertension.

The ultrasonography (US) and Computed tomography (CT) indicated the presence of a normal sized spleen with cyst in relation to the medial surface and upper pole of the spleen (Figure 1). The mass was otherwise well circumscribed and homogeneous. The pancreas and both kidneys were normal. Polyvalent pneumococcal vaccine was administered. The procedure start with placing the patient in right semi-lateral position and 30° right lateral table tilt and reverse Trendelenburg position. Three ports were applied (Figure 2). There was a giant cyst at the medial surface and the upper pole of the spleen and involving the hilum and separable from the stomach, and the pancreas with plenty of thick adhesions between the cyst and the parietal peritoneum were present. Aspiration of the cyst was necessary and yield 1400 ml of yellowish thick fluid (Figure 3). 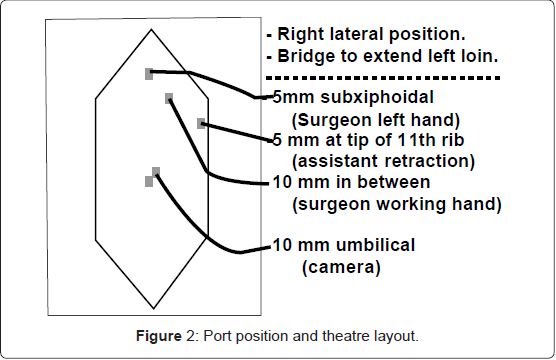 Figure 3: Intraoperative image of the large spleen after initial aspiration.

We practiced the “inferolateral approach” method, dividing the phrenocolic, splenocolic and lienorenal ligaments using Ligasure instrument followed by dissection of the gastro-splenic ligaments with the short gastric vessels (Figure 4). Ligating the splenic vessels was done at the hilum with 2-0 Vicryl double ligature. A drain was kept for one day. The spleen was taken out through 3-4 cm Pfannenstiel incision (Figures 5 and 6). 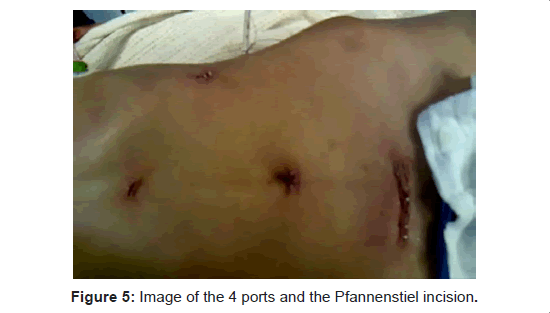 Figure 5: Image of the 4 ports and the Pfannenstiel incision. 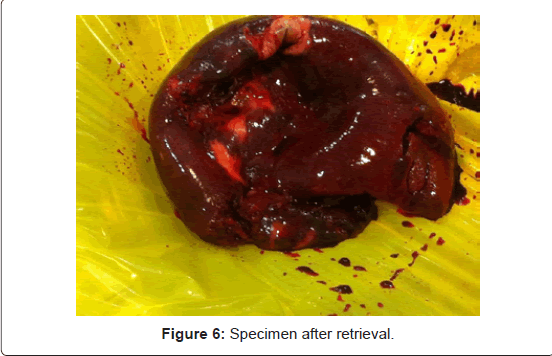 Light-microscope examination showed interior lining of tubulocolumnar, pseudostratified (mesothelial line) epithelium that was consistent with the diagnosis of an epithelial cyst (Figure 7). Fluid culture showed no growth. Postoperative recovery was uneventful, and the blood parameters returned to normal. The patient was discharged on day 3 after surgery. Splenic cysts are rare lesions. Pathogenesis of the true cysts is not entirely clarified and there are many theories by different authors. It has been suggested that they are derived from inclusions of the mesothelial lining of the splenic surface in the splenic parenchyma during development. [2] Patients with congenital splenic cysts are younger than those with false cysts, and marked female preponderance is observed [2,3]. They are usually discovered incidentally because of the lack of typical clinical symptoms, and are generally diagnosed after compression of neighboring organs and the diagnosis is easily made by noninvasive imaging. Cysts arising from adjacent organs, especially the tail of the pancreas can be differentiated by ultrasonic examination [2,4,5].

Diagnosis of the splenic cysts is generally based on the radiological examination (US, CT, magnetic resonance imaging (MRI)) [5]. Aspiration of the cyst content will not further differentiate true from false cysts or subclassify the congenital cyst [1]. By histology, it is possible to know whether the cyst is primary or secondary (no cellular lining) and to determine its precise nature. Surgery is primarily recommended for the prevention or treatment of complications. Decisions about the exact surgical procedure are based on the size of the cyst, its relation to the splenic hilar vessels and parenchyma, and the amount of healthy splenic tissue remaining [6].

Today, the options of management are percutaneous aspiration or percutaneous drainage, [7] partial splenectomy with a stapler or harmonic scalpel, total cystectomy, marsupialization or cyst decapsulation (unroofing), [8] laparoscopic puncture and creation of a cyst peritoneal window [4]. Access can be either by open laparotomy or laparoscopy. Partial splenectomy preserves more than 25% of the splenic parenchyma, which is the minimal splenic tissue to preserve immunologic protection without increasing the risk of recurrence [9].

Although the literature offers the possibility of providing conservative or semi conservative treatment, in our case, the cyst was bigger than the residual splenic parenchyma, which reduced the spleen to a small remnant, for which reason it would have been impossible to perform a simple cystectomy or partial splenectomy to preserve the spleen, and it was encompassing the hilum of the spleen. Hence, total splenectomy, vaccination, and long-term antibiotic prophylaxis is a viable alternative when it is needed.

We conclude that laparoscopic splenectomy is effective method of management for such cyst involving the hilar region of the spleen or replacing almost the splenic parenchyma. Intraoperative suction of such cysts under laparoscopic guidance greatly facilitates laparoscopic splenectomy. The use of pfannenstiel incision for specimen retrieval significantly reduces operating time as compared to piecemeal removal of the specimen by enlarging one of the ports.