Influence of Cooling Constant on the Stirling Dish System Efficiency

Solar energy is the source of the most promising energy and the powerful one among renewable energies. Photovoltaic electricity (statement) is obtained by direct transformation of the sunlight into electricity, by means of cells statement. Greenius is a powerful simulation environment for the calculation and analysis of renewable power projects such as solar thermal trough power plants, photovoltaic systems, wind parks or Dish/Stirling systems. In this work, we simulated the operation of the concentrator dish Stirling, this simulation allowed us correctly to predict the influence of the meteorological parameters (direct normal insolation, ambient temperature, air density (altitude), the angle elevation of the sun, and wind speed) on the system efficiency.

b) solar tower systems and

Our software of simulation Greenius is based on the following mathematical model: the gross electrical performance is given by the equation (1): [5]

The coefficients of the gross power are: a is performance model constant in

and b is the performance model constant in We .So the corrected irradiance is given by:

, and the correction factors are :

Where fshadowing is the shadowing and blockage factor and fintercept is the intercept factor. The temperature correction factor is shown in this equation (3):

is the normalized temperature for performance model in °C and

is the actual ambient temperature

is the upper Stirling temperature in °C and the

is the cooler constant in

Once the gross power is obtained, the net power can be found by subtracting the parasitic power used to run the tracking, cooling, and control systems from the gross power. The net power from a Stirling dish system is given by equation (4): 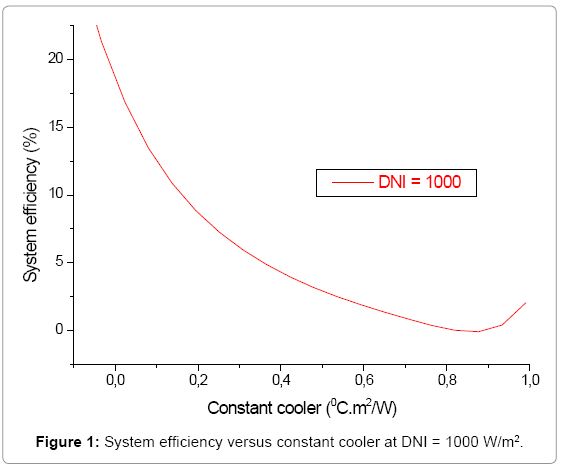 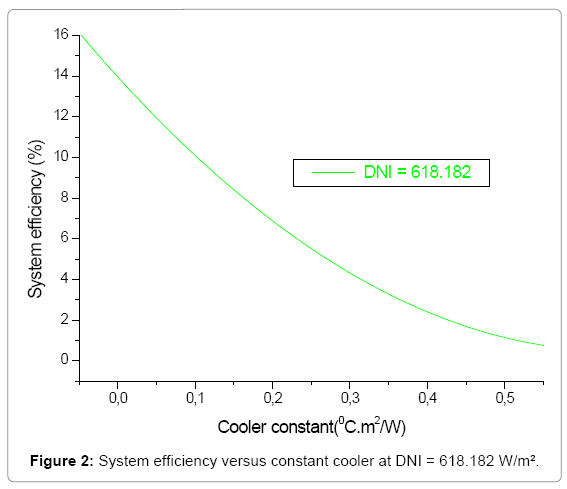 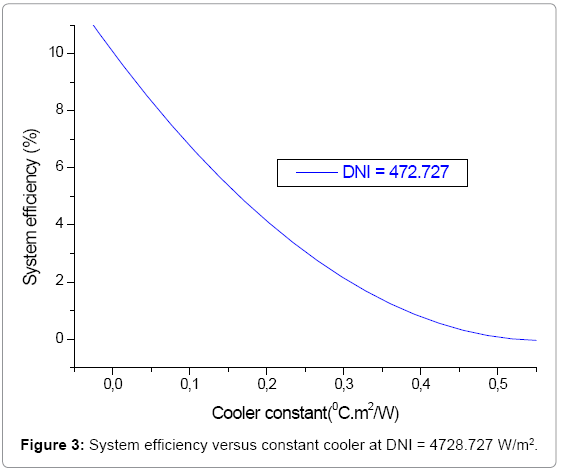 is the cooler heat exchanger effectiveness,

is the thermal load rejected from the Stirling engine into the cooler,

is the minimum capacitance rate of the hydrogen or cooling fluid,

is the temperature of the hot fluid entering the cooler from the regenerator, and

is the capacitance rate of the engine working fluid, and

is the temperature of the compression space. The effectiveness of the cooler will vary when the capacitance rate of hydrogen or cooling fluid changes. The effectiveness-NTU relationship for a shelland- tube cooler is given by Equations (7) and (8). The UA for specific operating conditions can be determined using Equation (10) where

is the minimum volumetric flow rate of the hydrogen working fluid or cooling fluid during operating conditions,

is the minimum volumetric flow rate of the hydrogen working fluid or cooling fluid during test conditions, and

is a coefficient that is taken to be 0.7.

A computational model was created and used to investigate the effects of system design parameters for a Stirling dish system. The model, implemented in Greenius, can be used to predict the variation of the dish Stirling system efficiency in a specific location using input weather data files. The model is expected to have greater accuracy predicting the system performance in different locations due to the additional properties of the wind velocity, sun elevation angle, and altitude. This model ideally will be used by designers to optimize design parameters and by researchers or utilities to obtain a better representation of a Stirling dish systems location specific performance.

Copyright: ©2013 Kaddour A, et al. This is an open-access article distributed under the terms of the Creative Commons Attribution License, which permits unrestricted use, distribution, and reproduction in any medium, provided the original author and source are credited.