Copyright: © 2013 Alaat El Essawy MT. This is an open-access article distributed under the terms of the Creative Commons Attribution License, which permits unrestricted use, distribution, and reproduction in any medium, provided the original author and source are credited.

Objectives: This study was conducted to assess the diagnostic accuracy of magnetic resonance imaging (MRI) in perianal fistula in comparison to the operative findings with a description of the technique, illustration of relevant normal anatomy, and examples of various fistula types. This study is based on a retrospective analysis of 56 patients with a clinical diagnosis of perianal fistula. MRI finding was correlated with the surgical finding in 52 patients which is highly significant (P=0.003). Fallacies of MRI were observed in 4 patients with recurrent fistulae. Conclusions: MRI is useful in successful treatment of perianal fistulae by reliable assessment of fistula anatomy and correct assessment of the extent of the disease and its relation to the sphincter complex. The internal sphincter (a smooth muscle) is hypo intense on T1W and T2W TSE images and is relatively hyper intense on fat-suppressed T2W images (Figures 3A,B and C). It shows enhancement on postgadolinium T1W images The coronal images depict the levatorani muscle (Figure 3A), the identification of which is important to distinguish supralevator from infralevator infections.

Classification of the perianal fistulae Figure 4: Classification of the perianal fistulae.

Grade 4: Transsphincteric fistula with abscess (Figure 4F) or secondary tract within the ischioanal or ischiorectal fossa.

We included in this study all patients, who had been admitted to colorectal unit with peri-anal fistula in 2009. After preoperative clinical examination, MR imaging was done using a 1.5 and 3 Tesla superconducting magnet with external coil. Imaging was done using inversion recovery (STIR), T2WI, T1WI and T1WI post contrast with fat suppression sequences in axial, coronal and sometimes sagittal planes. MRI fistulogram with instillation of contrast (mixture of 1 ml of 0.01 mmol gadolinium with 20 ml saline) or saline through the external opening was performed in some cases. Slice thickness was 4 mm, F.O.V. was 25×25. Imaging matrix was 256×256. The images were evaluated for the presence of the primary fistulous tract, Internal opening and its relations to the sphincters. Secondary extensions, any abscesses or collections also were recognized. The fistula is identified as hyper intense tubular structures on T2WI and abscess appears as fluid filled cavities either high or low signals on T2WI.

These findings were compared to the operative findings. Figure 6: (A-C): Post contrast axial T1WI MRI in a male patient known to have Crohn’s disease showing infralevator intersphincteric fistula with multiple branches. External opening is in the right side with multiple bilateral internal opening (red arrows). The fistula is confined by the external sphincter and the ischio-anal fossa is unaffected (Grade II). 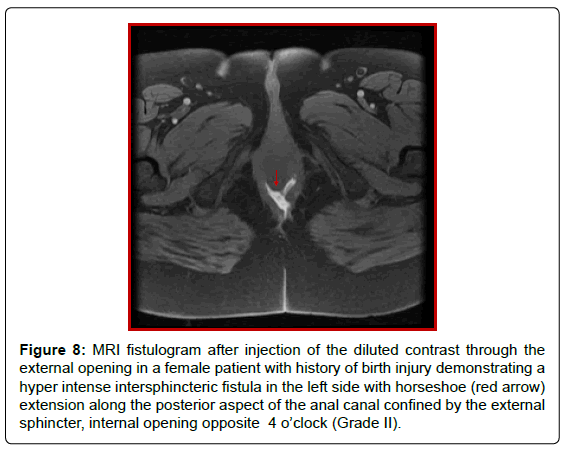 Figure 10: Right side Trans-sphincteric fistula in a male patient. MRI post contrast axial and coronal images demonstrates trans-sphincteric fistula (yellow arrows) with internal opening at 7 o’clock (red arrows), there is extension in the right ischio-anal fossa with tiny abscess (white arrows) that was not suspected at clinical examination and was found at surgery guided by MR findings (Grade IV). Figure 14: Extrasphincteric fistula: MRI T1WI post contrast axial images in a male patient known to have crohn’s disease with recurrent fistula showing multiple fistulae in the intersphincteric, trans-sphincteric and extrasphincteric in the left side (red arrows) that open in the rectum at 1 o’clock that was missed during surgery and considered as a cause of recurrence. Multiple perianal abscesses are noted with abscesses in the pre sacral and both gluteal regions (yellow arrows).

The correlation of the MR imaging findings, with surgical findings demonstrated that MR imaging correctly depict primary tracks in 52 of 56 cases. MR imaging showed two false-positive findings of a primary track. Two intersphincteric fistulas were misdiagnosed at MRI, one proved to be a sinus (Figure 16) at surgery and the other one, no fistula seen. Two trans-sphincteric fistulas were missed at MRI and were seen at surgery. MR imaging depicted 20 of 20 abscess collections, five are supralevator abscess collections and 15 are intersphincteric. All 5 horseshoe fistulas detected by using MR imaging were confirmed at surgery, all secondary branches were seen properly in MRI. From the Table 2 we can see that MRI has a very high accuracy rate with high sensitivity and specificity in detection of primary tract and internal opening describing about 96% and 100% in detection of the abscess and horseshoe fistula.

Table 2: Accuracy of MR Imaging for the detection of a Primary track, Abscess, Horseshoe fistula and Internal opening.

The study is a retrospective comparative between surgery and preoperative MR imaging, aiming to precisely evaluate the value of preoperative MRI examination.

Preoperative MR imaging revealed internal opening in 52 patients (96%). Two cases were misdiagnosed as a intersphincteric fistula and one proved to be a sinus and no fistula seen in the second case, it represents a prominent vessel. Another two trans-sphincteric fistula were missed in MRI and depicted at surgery, the only explanation that these cases missed is bad quality of the images as both patients are obese.

MRI can obviously detect fistulous extension with good localization in relation to surgically constant anatomical landmarks, especially in coronal sequences. The most important anatomical points for the surgeon were internal opening location which was described in clock orientation-external sphincter, course of the tract in relation to the sphincters and levatorani muscle. Preoperative characterization of the anatomical course of the fistula and all associated infection is crucial [9] and MRI helps to limit the recurrence and/or incontinence after surgery. This can be explained as it helps to avoid unnecessary wide exploratory dissection through the sphincter. While direct non imaging guided dissection may enforce the surgeon to do generous transsphincteric or supralevator dissection for detailed exploration, which is incriminated for postoperative incontinence. Also, the high possibility of missing other pathological contents, like the commonly reported side branches, horseshoe extension and abscesses, is the main causative etiology of postoperative recurrence [5].

This is also supported by many authors [2,10,11] who stated that MR imaging could depict more extensions and/or associated findings than could be gained from direct surgical exploration without preoperative imaging. So, additional information that can be obtained from preoperative MR imaging will improve the surgical results, especially in patients with complex high grade fistulas [5].

Fistulas associated with Crohn disease and recurrent fistulas, the complex fistulas, are often more difficult to evaluate during surgery because of the extensive secondary extensions and multiple perianal and perirectal abscess collections. When not identified and properly treated, these extensions and abscesses may lead to recurrences [12]. The recurrent nature of Crohn perianal disease is well known, [13] and many recurrences in patients with Crohn fistulas are simply due to overlooked abscesses and secondary extensions [14]. The largest additional value was seen in the detection of supralevator abscesses and horseshoe fistulas (Figure 4 and 5) [15].