Mucins in Gastric Cancer - An Update

Copyright: © 2013 Boltin D, et al. This is an open-access article distributed under the terms of the Creative Commons Attribution License, which permits unrestricted use, distribution, and reproduction in any medium, provided the original author and source are credited.

Mucins are high-molecular-weight glycoproteins expressed throughout the gastrointestinal tract, with a key role in mucosal protection and function. In gastric cancer expression of MUC5AC and MUC1 is reduced and denovo expression of MUC2 occurs. With progressive loss of tumor differentiation and increased tumor stage, expression of MUC5AC and MUC1 is further reduced, and MUC2 decreases. Isolated MUC2 expression (the intestinal phenotype) correlates with metastatic spread and poor survival. There is emerging evidence that MUC1 acts as an oncoprotein when overexpressed. The cytoplasmic tail of MUC1 interacts with the H. pylori virulence factor cagA and is a major effector of the wnt-β catenin intracellular signalling cascade. Polymorphism in the MUC1 gene has been identified in gastric cancer patients and may have a prospective role in the stratification of high-risk subjects. The MUC1 gene also mediates resistance to the recombinant HER2/neu antibody trastuzumab. Future research efforts will examine targeting MUC1 for therapeutic purposes.

Mucins are high-molecular-weight glycoproteins, which are heavily decorated with O-linked oligo-saccharides and n-glycan chains, linked to a protein backbone. There are 21 mucin (MUC) genes known in the human genome. These genes encode 2 groups of mucins: secreted mucins and membrane-bound mucins. The main mucins expressed in the stomach are MUC 1 (membrane-bound) and MUC5AC and MUC6 (secreted) [1]. MUC5AC, forming the bulk of the adherent unstirred mucous layer, is secreted by surface foveolar cells, whereas MUC6 is secreted by neck and gland cells, and both are strongly expressed in normal gastric mucosa (Figure 1) [2]. These two mucin proteins remain segregated within the mucous gel in a laminated linear arrangement [3]. Breach of the gastric mucosa (as in the case of peptic ulcer) is associated with quantitative or ultrastructural changes in the mucin molecule. These changes are mediated by NSAIDs, H. pylori and other factors, and may be pre or post translational in nature [4-6]. 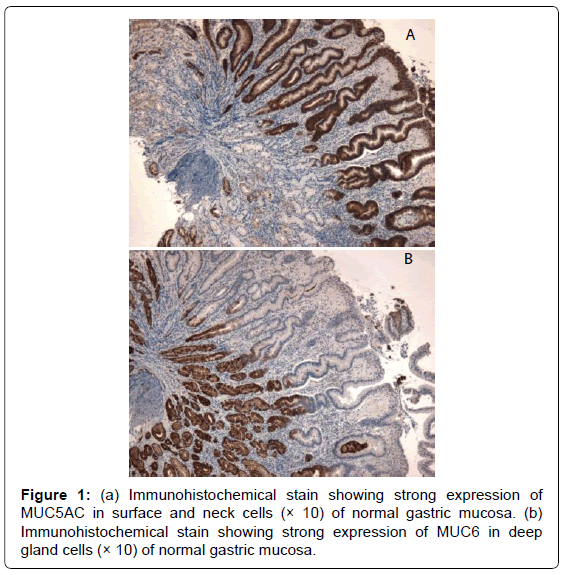 The usual methods for detecting mucin proteins in the gastric mucosa are immunohistochemistry staining or Western blot. Alternatively, mucin RNA can be detected with Northern blot as a surrogate for mucin expression. The large size, extensive glycosylation, and gel-forming nature of mucins make them a challenge to work with, and a combination of methods is often required. Additional techniques include dot/slot blotting, use of lectins and antibodies for detection of membrane-bound mucins and immunofluorescence [7].

The development of intestinal metaplasia (IM) in the stomach is associated with distinct changes in the mucin phenotype. Complete IM (type I), which is histologically characterized by a well-defined brushboarder, displays markedly reduced MUC1, MUC5AC and MUC6 but strong, uniform, de novo MUC2 expression. Incomplete IM (types II and III) exhibits strong, uniform MUC1, MUC2 and MUC5AC expression in goblet and columnar cells, but variable MUC6 expression [8]. Progression to dysplasia and carcinoma is more common in incomplete IM compared to complete IM. Expression of MUC6 in dysplastic lesions (including adenoma) is an independent predictor for malignant progression [9].

Marín et al. [10] followed 387 subjects with precursor lesions for over a decade, and found that approximately half of these lesions did not change, a quarter regressed and a quarter progressed. Genetic variation in MUC2 may significantly influence the progression of gastric cancer precursors, especially in H. pylori infected individuals. 3 SNPs at the 3’-moiety in the MUC2 gene (rs10794293, rs3924453 and rs4077759) are associated with a decreased risk of progression whereas another 4 SNPs at the 5’-moiety (rs10902073, rs10794281, rs2071174 and rs7944723) are associated with increased or decreased likelihood of regression [10].

MUC5AC expression progressively decreases with loss of tumor differentiation, and is more often seen in intestinal-type (105/217, 48%) compared to diffuse-type (4/40, 10%) cancers [12]. MUC1 is strongly expressed in two thirds (18/27) of well-differentiated localized tumors but only 41% (38/92) of poorly differentiated tumors. MUC1 expression similarly decreases with higher tumor stage. MUC2 expression, although not a feature of normal gastric mucosa, is expressed in 98% (39/40) of diffuse-type and 90% (194/217) of intestinal-type gastric neoplasms. MUC2 expression is progressively lost with increasing tumor stage.

Expressions of MUC4 and MUC1 have been identified as poor prognostic factors in gastric cancer as assessed by IHC and western blot. MUC4 is related to lymphatic invasion and lymph node metastasis. MUC1 is related to lymphatic and venous invasion [13]. This is seemingly at odds with the previous observation that MUC1 expression decreases as tumor grade and stage increase.

MUC1, being a membrane bound mucin, possesses extracellular and intracytoplasmic domains. The cytoplasmic tail of MUC1 (amino-acid sequence SAGNGGSSLS) competes with E-cadherin for binding to β-catenin. Receptor tyrosine kinases (such as src and erbB) phosphorylate MUC1, and together with serine/threonine kinases and Protein Kinase C-δ (PKC- δ) promote binding of MUC1 to β-catenin [14]. GSK3β, an effector of the Wnt pathway, binds to an upstream site (STDRSPYEKV) on the MUC1 molecule, and prevents binding of β-catenin to MUC1, ultimately leading to β-catenin degradation. Conversely, the MUC1-β-catenin complex blocks GSK3β-mediated phosphoration and allows β-catenin to persist. MUC1 cycles to the nucleus where the intranuclear MUC1-β-catenin complex binds TCF7L2 on the cyclin-D1 promoter and coactivates cyclin-D1 expression. MUC1 also associates with transcription factors such as STAT1/3, NFκB RelA and ERα, and contributes to transactivation of their target genes (Figure 2). MUC1 is similarly transported to the mitochondria where it blocks activation of apoptotic pathways [15]. In this fashion MUC1 acts as an oncoprotein. Figure 2: Intracellular cycling of MUC1
MUC1 is phosphorylated by EGFR and other receptor tyrosine kinases. Under normal conditions, the cytoplasmic tail of MUC1 cycles from the cell membrane to endosomes and then back to the cell membrane. When overexpressed, MUC1 activates the wnt-β-catenin pathway. MUC1 competes with E-cadherin for binding to β-catenin. CagA and PKC-δ promote MUC1 binding to β-catenin, whereas GSK3β blocks MUC1 binding to β-catenin leading to β-catenin degradation. Persistence of the MUC1-β-catenin complex facilitates cycling to the nucleus where MUC1-β-catenin binds TCF7L2 on the cyclin-D1 promoter, coactivates cyclin-D1 and interacts with other transcription factors such as STAT1/3, NF κB RelA, and ERα. Transport of MUC1 to the mitochondria leads to inhibition of apoptosis.

H. pylori interacts with MUC5AC in order to facilitate colonization of the gastric mucosa. H. pylori disrupts the assembly of the mucin molecule via inhibition of galactosyltransferase [5,17]. Furthermore, H. pylori reduces gastric mucus viscosity by elevating pH through urease secretion, thereby enhancing its motility within gastric mucus [18]. BabA and SabA adhesins on H. pylori bind to Lewis B blood group antigens on MUC5AC, facilitating colonization [19]. On the other hand, MUC6 has antimicrobial properties which are directed against H. pylori. Unique glycan-residues on MUC6 inhibit bacterial biosynthesis of cholesteryl-α-D-glucopyranoside, a major cell wall component [20]. Mucin decorated with Leb (the binding site for the H. pylori BabA adhesin) effectively bind H. pylori, thereby impairing its colonization of the mucosal surface [21]. As such, MUC6 is aberrantly expressed in surface cells in response to H. pylori infection [22].

As discussed, in gastric cancer, MUC1 acts as an oncoprotein by binding β-catenin and modulating the wnt signaling pathway, leading to the upregulation of cyclin D1. CagA, a H. pylori virulence factor, can be injected into host cells where it undergoes tyrosine phosphorylation (Figure 2). The presence of cagA in gastric cancer specimens correlates with subcellular coimmunoprecipitation of MUC1 and β-catenin. CagA positive samples also show nuclear colocalisation of β-catenin and overexpressed cyclin D1. Taken together, this suggests that cagA is a regulator of the wnt signaling cascade [23].

The mucin molecule’s o-gycan sidechains (α1,4-N-acetylglucosamine) are synthesized by α1,4-N-acetylglucosaminyltransferase (α4GnT). These sidechains have intrinsic anti-H. pylori activity suggesting a role in cancer protection [20]. Indeed, α4GnT(-/-) knockout mice without exception develop gastric carcinoma through a hyperplasiadysplasia- carcinoma sequence, independent of H. pylori, reinforcing the antineoplastic role of mucin o-gycan sidechains. o-gycan sidechains are significantly reduced in both gastric adenoma and adenocarcinoma. Their presence in normal gastric mucosa serves to prevent carcinogenesis both through inhibition of H. pylori and through suppression of proinflammatory cytokines [24].

Expression of MUC2 (detected by rt-PCR) in peritoneal washings has been identified as a marker for peritoneal recurrence of gastric cancer following surgery in the absence of overt metastasis [25]. This could identify high risk patients who may benefit from adjuvant chemotherapy.

There are currently no widely accepted guidelines for screening individuals with a family history of gastric cancer or those with exposure to established environmental risk factors. Traditionally, the magnitude of these subjects’ risk has been difficult to quantify, the modality and frequency of screening tests remains unclear, and there are no practical interventions available to treat precursor lesions, if identified. However, in a landmark study attempting to shed light on the problem of risk stratification in high-risk subjects, two singlenucleotide polymorphisms (SNPs) in the MUC1 gene were identified [27]. The SNP with greatest significance, rs4072037, confers a 1.66-fold risk, and in the presence of a SNP in Prostate Stem Cell Ag, confers a 8.38-fold risk for developing diffuse-type gastric cancer [28]. Another group demonstrated that A/G polymorphism at the 568 site of exon 2 correlates with gastric cancer risk, and that the AA polymorphism leads to decreased MUC1 expression and increased cancer risk [29]. This highlights the physiological role of wild-type MUC1 in mucosal protection on the one hand, and it’s potential to act as an oncoprotein, on the other.

Conversely, another MUC1 gene SNP, rs2070803 GA/AA, has been shown to be protective for gastric cancer with over 50% risk reduction. Significantly, this association is apparent in both diffuse and intestinal subtypes [30]. Although much rarer, MUC2 and MUC6 gene minisatellite polymorphisms have been identified in family clusters, and confer up to a 7-fold risk for gastric cancer. These traits can be passed in a Mendelian fashion [31,32]. Alleles of MUC5AC have been associated with gastric cancer however they are of uncertain significance [33]. Polymorphisms of MUC6 associated with gastric cancer have not been described.

In a prospective cohort of first degree relatives with no endoscopic or histological evidence of gastric cancer precursors, our group demonstrated increased expression of MUC1 which may serve as a predictor for future intestinal metaplasia [34].

Gastric mucins have a key role in the protection and proper functioning of the gastric mucosa and are altered in the setting of neoplasia. Gastric cancer can be characterized by its mucin phenotype. The intestinal phenotype (isolated MUC2 expression) represents the most advanced stage neoplasms with the poorest prognosis. Over recent years the centrality of MUC1 as a key mediator of wnt-β catenin signaling has led to the identification of MUC1 polymorphisms which may influence the risk of developing gastric cancer in a given individual. Future research will define the roles of MUC1 IHC staining and genetic testing for screening high-risk populations, and examine therapeutic targeting of MUC1 for gastric cancer treatment.