Copyright: © 2012 Douichene S, et al. This is an open-access article distributed under the terms of the Creative Commons Attribution License, which permits unrestricted use, distribution, and reproduction in any medium, provided the original author and source are credited.

The versatility of Aluminium chemistry will ensure its burgeoning use in the future in all manner of applications. This very same chemistry will also ensure its increased biological availability in all biota including man. We do not know enough about the biological chemistry of a chronic and sub-acute exposure to Aluminium to be able to predict its impact on human health. Although the hypothesis of a link between Aluminium and Alzheimer's Disease (AD) has been supported by several epidemiological studies, there is much controversy regarding these findings and their interpretation. There is no doubt that the drugs discovered for neurodegenerative disease are far from ideal, and are not more than acetyl cholinesterase inhibitors, in fact alternative medicine could be moderate and protect nerves from neurotoxicity and AD. Curcumin is one of strong medicinal species that prove antioxidative stress effect against reactions cascade of neurofibrillary tangles. Our aims is to clarify the role of Curcumin with a fixative of absorption as a protective and therapeutic agent against neurodegenerative disorders and Alzheimer's disease induced by AlCl3 on the pyramidal cells in cerebral cortex and hippocampus of albino mice, by means of two experiences realized with a different exposition of albino mice; sub acute and chronic exposure with a different manner (PO and IP) on Curcumin with a fixative of absorption and AlCl3.

Aluminum (Al) is a common metal in the environment and one of the most abundant in the terrestrial crust. Human exposure to Al has been increasing over the last few decade’s [1]. This element appears mainly in food products and in drinking water derived from both natural sources and treatment methods Oxidative injury has been suggested to contribute to neurodegenerative and metabolic disorders [2]. Epidemiological studies have indicated a link between Al in drinking water and AD and a variety of human and animal studies have implicated learning and memory deficit after Al exposure [3,4].

Drugs currently available on the market include different inhibitors of acetylcholine esterase and N-methyl D-aspartate (NMDA) receptor antagonist. These drugs improve the function of still intact neurons, but do not inhibit the ongoing degenerative process leading the neuronal cell death [5].

Curcumin is a biological active component of turmeric (curcuma longa) is used as a curry spice and herbal medicine for the treatment of inflammatory conditions, cancer, AIDS, and other diseases [6]. Results show that a low dose of curcumin significantly suppressed the inflammatory reactions, oxidative damage and plaque burden and decreased the amount of insoluble amyloid [7].

To assess a spectrum of learning and memory functions a battery of tests is needed. These tests are selected to assess behavior and memory. The present studies were undertaken to assess the neuroprotective effect of curcumin administrated with Al represented by behavior and memory tests, confirmed by the histological study of mice’s brains.

Curcumin and the other chemicals were purchased from Sigma- Aldrich Chemical Co.

Fifty five healthy adult mice weighting from 18-22 g were obtained from Pasteur institute Algeria. They were maintained at 24 ± 5°C with a 12 h light/dark cycle, and have been given a commercial pellet diet (ONAB Algeria) and fresh drinking water ad libitum.

Functional behavioral assessment is required as part of testing the nervous status (manifest determinations). These guidelines apply to animals in special tests, including those with locomotors activity, curiosity (holes test), anxiety/curiosity (maze on +), anxiety (black/ white room) and Persolt test.

The assessment of animal memory using different types of mazes has been used in neurosciences [8]. Several models have been proposed recently, mainly trying to evaluate accuracy of choice between the alternatives presented in the same day of the session, instead of looking for the accumulated learning through successive days of training.

The Morris water maze is widely used to study spatial memory and learning. Animals are placed in a pool of water that is colored opaque with powdered non-toxic tempera paint, where they must swim to a hidden escape platform.

Mice from both studies were sacrificed with an overdose of Chloral.

After the step-through avoidance test, the brains of mice were removed right after sacrifices. Removed brains were then impressed in 10% neutral buffered formaldehyde for 24 hours. Serial coronal paraffin sections were cut at 4 μm thickness for hematoxylin and eosin (H&E) and Congo red staining.

When non-spatial memory test preferably conditional the results obtained during the three experimental tests show that mice intoxicated take much longer to reach the food in the arm lit unlike control mice, treated intoxicated and that put a very short time to get informed on the arm (Figure 2).

H&E staining shows that there are typical neuropathological changes in the hippocampus of intoxicated/Alzheimer’s model. In the control groups the neurons were full and arranged tightly, the nuclei were light stained. By comparison in the model group mice the cytoplasm of neuron were shrunken, the nuclei were side moved and dark stained, neurofibrillary degeneration and neurons loss were observed in hippocampus. Curcumin administration shows moderated neuropathological changes. The neurons recovered their characteristic shape, with prolonged neurofibrillary tangles (Figure 3). Congo red staining shows the beginning of injuries induced by Aluminium, characterized by assembling of nuclei resulting from cytoplasm lysis, and a slowly reaction of neurodegenerative mechanism for the Alzheimer treated model. The control cell wasn’t stained with the Congo red (Figure 4).

In the present study, the effects of Al exposure were investigated to describe the associated behavioral (Figures 1 and 2) and brain modifications. Neurodegenerative disease is characterized by progressive pathological changes in the brain (Figures 3 and 4) that translate into clinical signs of decline in cognitive abilities (memory), functional abilities, mood, behavior, and finally physical changes. The pathological changes in the Alzheimer's brain include deterioration and loss of neurons (nerve cells) leading to brain atrophy [8].

Dietary antioxidants cooperate with the body enzymes to protect the brain from free radical damage [9]. Curcumin (of curcuma longa) is used to improve mental concentration and memory capabilities. It has free radical scavenging and lipid peroxidation activities [10,11]. Also it is a potent antioxidant with low or no side effects, it increases antioxidant enzymes, hypoglycemic, antibacterial and antifungal properties [12,13]. The antioxidant activity of coriander could protect liver from oxidative damage [14] and from lead induced testis oxidative damage.

In this investigation the effect of curcumin with over load of aluminum chloride to mice lead to reduction of neurotoxicity and Alzheimer's disease appeared as shrunken decreasing of pyramidal cells, reduced effect of decreasing number of the pyramidal cells. These brain moderation changes induced by curcumin against aluminum chloride administration were due to reducing oxidative damage which contribute to disease pathogenesis and were in accordance with the aim of this study which is to prove the protective effect of curcumin against aluminium neurotoxicity [15], and also Alzheimer’s disease by means of curcumin administration with Aluminium chloride [16]. 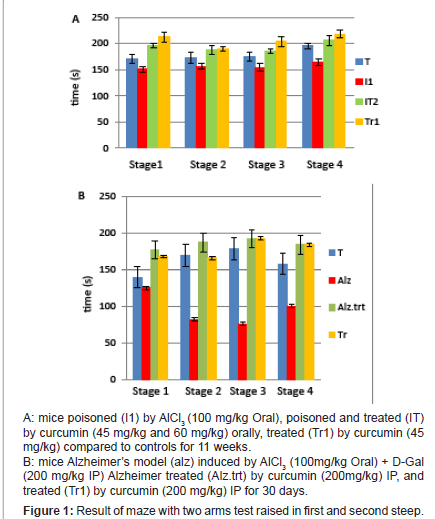 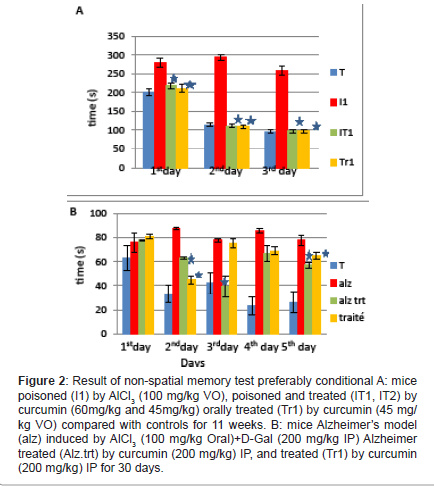 Mice were poisoned with Aluminium chloride (AlCl3) orally at 100 mg/kg/day in drinking water, another group poisoned with the same manner but treated with curcumin orally (45 mg/kg/day) for 11weeks. The animals of the control group received drinking water only during this period, and the control treated were received curcumin in distilled water (45 mg/kg). Results showed that curcumin moderated the Al effect on anxiety/curiosity of treated intoxicated animals (Figure 1). The same results were shown for the subchronic exposure to AlCl3 in mice Alzheimer’s model increase anxiety in opposite of the results obtained for the Alzheimer treated group.

Based on these results, it seems likely that enhanced in exploratory behavior in treated poisoned mice during the whole board test and locomotor activity may reflect the less anxiety response of an animal to an unfamiliar environment. The test was based on the adversive properties of the open field and in which antioxidant treatment -induced ease of exploratory activity is compared between treated poisoned and poisoned groups. This model permits simple and quick evaluation of the anxious behavior and its modification by pharmacological agents. In our present study forced swimming test showed a significantly increased immobility time of Al-treated mice. This test is a common behavioral test for assessing depression in which animals have given up the hope of escape and depression remains controversial [17], drugs with antioxidant activity reduce the time during which the animals remain immobile [18]. These observations were important for the evaluation of the cognitive tests in since impaired physiological functions or changed motor performance may conflict with learning and memory tests [19]. Most learning paradigms that require configural associations require a fully functioning hippocampus; however learning paradigms that can be solved using only elemental associations can be solved without input from this structure [20]. The memory task can test the hippocampus in learning and memory. Results of the conditional memory documented that Al-treated mice showed no impairment in learning and memory in reference version of the test (Figure 2).

There is no animal model available that can mimic all the cognitive, behavioral and histopathological abnormalities observed in patient with Alzheimer disease [20].

Our histopathological study of chronic exposure shows obvious difference between the treated poisoned groups and the poisoned, not very normal as a control and control treated, (Figure 3) but can also explain a deceleration of amyloid reaction, unlike the sub chronic exposure that wasn’t very clear with H&E staining, which Congo red staining that showed (Figure 4) the amyloid formation and apoptosis for the poisoned group (Alzheimer’s model) less important in treated Alzheimer’s model [21]. Turmeric is being studied for the prevention of neurotoxicity and Alzheimer's, or to slow disease progression. Studies in humans have been launched, after promising trials in animals, but it’s less bioavailability and it’s fast eliminated by the liver detoxification pathways, obliged there administration with piperine exist in Pepper nigrum, inhibitor of the key enzyme involved in detoxification, which helps maintain a high rate of curcumin (Curcuma longa) longer

The aim of this research was to evaluate the preventive effect of curcumin with a fixator of absorption on chronic neurotoxicity of aluminum, as well as Alzheimer's disease induced (subacute/chronic sub), through the use of biological models in behavioral, memory, and histological status of nerves.