In planning for post mastectomy radiation for locally advanced breast cancer, it is important to ensure adequate coverage of the chest wall and regional nodal regions at risk. There is an area that is known to have dosimetric hot and cold spots in between the tangential field of radiation and the supraclavicular field. This is known as the “match line”. In this case report, we report a case of a patient with recurrence in the match line due to less dosage in this region. This is a good case to learn to always ensure adequate coverage in the match line when approving a plan to avoid local recurrence in this region.

Radiation therapy for locally advanced breast cancer is a local approach that has proven to not only improve local control but also increase overall survival. In patients with 4 or more lymph nodes positive, it has been known for years that they benefit from chest wall and regional nodal radiation followed by mastectomy. Patients with triple negative breast cancer are known to be at higher risk for recurrence and more aggressive tumors [1]. It is important to assure adequate coverage of the chest wall and regional lymph nodes when approving a plan in Radiation Oncology.

One year later, she presented with increasing pain in her left arm without loss of movement. CT of the chest showed irregular round soft tissue density seen underneath the left pectoralis major muscle measuring approximately 1.5 by 1.7 cm. PET/CT revealed a hypermetabolic area that was suspicious for disease recurrence (Figure 1). 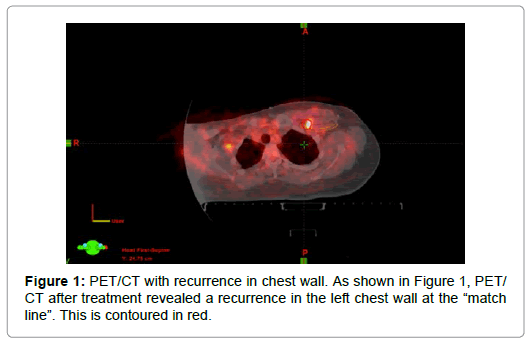 Figure 1: PET/CT with recurrence in chest wall. As shown in Figure 1, PET/ CT after treatment revealed a recurrence in the left chest wall at the “match line”. This is contoured in red.

This case shows a recurrence at the “match line” or region between the tangential field and supraclavicular field (Figure 2). It is important when reviewing radiation plans to ensure adequate coverage in this region. Most believe that at least 45 gray is needed to eradicate microscopic nodal disease [2]. A higher dose of radiation is needed if extracapsular nodal extension is seen on pathology. In this case, there was not adequate coverage at the “match line” between the supraclavicular field (Figure 3) and the tangential field (Figure 4), which led to a recurrence in this exact location. In the era of CT guided radiation treatment planning, it is also recommended to contour the axillary nodal levels to ensure adequate coverage. 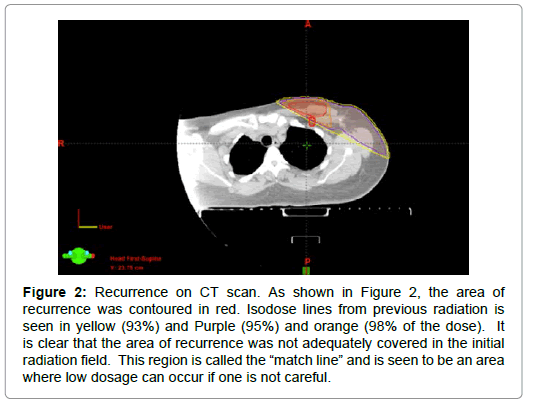 Figure 2: Recurrence on CT scan. As shown in Figure 2, the area of recurrence was contoured in red. Isodose lines from previous radiation is seen in yellow (93%) and Purple (95%) and orange (98% of the dose). It is clear that the area of recurrence was not adequately covered in the initial radiation field. This region is called the “match line” and is seen to be an area where low dosage can occur if one is not careful. 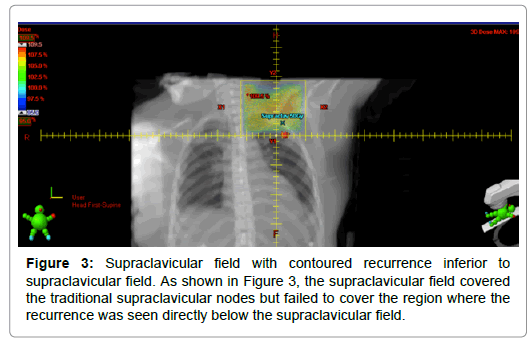 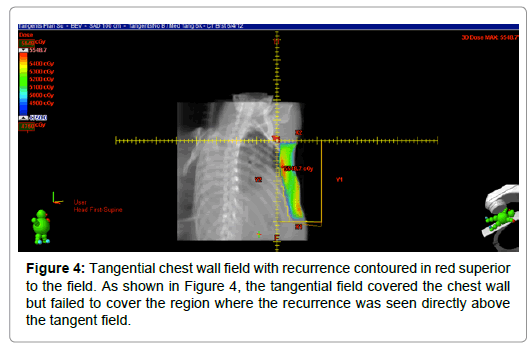 Figure 4: Tangential chest wall field with recurrence contoured in red superior to the field. As shown in Figure 4, the tangential field covered the chest wall but failed to cover the region where the recurrence was seen directly above the tangent field.

Copyright: © 2015 Singh A, et al. This is an open-access article distributed under the terms of the Creative Commons Attribution License, which permits unrestricted use, distribution, and reproduction in any medium, provided the original author and source are credited.