Copyright: © 2016 Takeuchi J, et al. This is an open-access article distributed under the terms of the Creative Commons Attribution License, which permits unrestricted use, distribution, and reproduction in any medium, provided the original author and source are credited.

A 44 year old male presented with gait disturbance and showed rigidity, bradykinesia and small steppage gait. In his infancy, he had mental and motor retardation. MRI revealed pathognomonic iron deposition. He was diagnosed to have β-propeller protein-associated neurodegeneration (BPAN) with a de novo somatic mosaic mutation in WDR45.

β-propeller protein-associated neurodegeneration (BPAN) - also known as static encephalopathy of childhood with neurodegeneration in adulthood (SENDA) - is a subtype of neurodegeneration with brain iron accumulation (NBIA) that often presents with progressive dystonia, parkinsonism and pyramidal tract signs with heavy iron accumulation at the globus pallidum and the substantia nigra [1,2]. Among nine subtypes of NBIA, BPAN is known to have a unique biphasic clinical course and pathognomonic MRI findings with T1 hyperintensity at substantia nigra [3]. BPAN is an X-linked dominant disease caused by WDR45 mutation and lethal in most male cases. Here we present a rare male case of BPAN with genetic confirmation of somatic mosaic mutation in WDR45 [1].

A 44 year old male was referred to our hospital for gait disturbance. In his infancy, he had developed mental and motor retardation. He started to walk at the age of 2.5 and was noticed to have language problem at the age of 3. He could hardly speak a sentence composed of more than three words. He graduated from a school for disabled children and worked actively for a factory designed to employ mentally disabled people for more than 20 years.

At the age of 40, he started to suffer from insomnia and was prescribed the antidepressant paroxetine and later sulpiride in addition. Almost at the same time, he was noticed to develop stooped posture and gait disturbance with a short step. Soon after, he became unable to change his trousers by himself. His gait disturbance progressed; soon he showed difficulty in sitting up and, finally, in rolling over in the bed. Additionally, he developed difficulty in hand movements and was referred to our hospital.

He had no siblings, and none of his family including his mother had specific neurological and mental diseases in their childhood or in their earlier adulthood.

On physical examination, he showed no skeletal deformity or skin lesion. On neurological examination, he was conscious but unable to respond actively to verbal and sensory stimuli, suggestive of apathy. He could follow only some simple commands and spoke a few words such as “yes” or “O.K.”. His eye movement was not limited. He showed no apparent limb weakness. No involuntary movement, including tremor or dystonic movement, or abnormal posture was found. He had severe rigidity in the neck, trunk, and all extremities, with the left side affected more severely. He also showed bradykinesia in all extremities. Apparently he showed no ataxia or no sensory impairment. The tendon reflexes were all normal. Babinski and other pathological reflexes were negative. He could barely stand up from sitting position by himself. On station, he showed stooped posture and could hardly walk, exhibiting very small steppage and poor arm swing.

He stopped taking sulpiride, but the symptom progressed. He was then prescribed 200 mg of L-Dopa/carbidopa and the dose was increased progressively. At the dose of 600 mg per day, his conditions showed dramatic response, and his ADL recovered from bedridden to almost independent level. Imaging for dopamine transporter (DaT scan) revealed severely low accumulation of the tracer at the bilateral putamen (Figure 2).

By whole exome sequencing, we found a de novo mutation of WDR45 (Figure 3). Next generation sequencing of PCR products showed that the rate of mutated allele was 68.1% in the blood, 39.1% in the hair and 18.2% in the nails, proving the somatic mosaicism. He was diagnosed to have β-propeller protein-associated neurodegeneration (BPAN).

This is a quite rare male case of BPAN, X-linked dominant disease, in which different rates of mutated allele were first shown in various organs, directly proving mosaicism which refers to mutations that occur after the germ-cell stage and therefore affect only a portion of the somatic cells. Before the present case, only one male case was reported with possible mosaic mutation in one organ [1]. Without mosaicism, the mutation in male case can cause severe encephalopathy [4] or may be lethal. 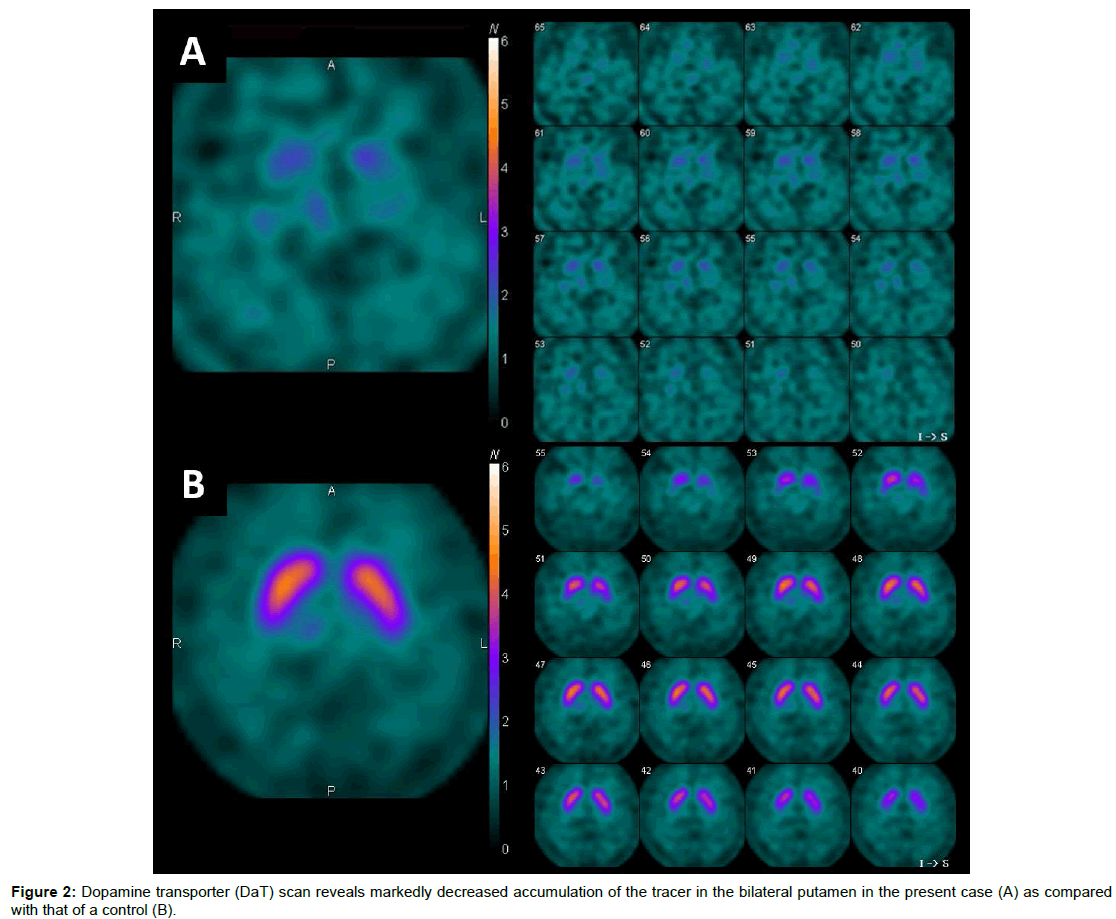 Figure 2: Dopamine transporter (DaT) scan reveals markedly decreased accumulation of the tracer in the bilateral putamen in the present case (A) as compared with that of a control (B). Patients with BPAN in general have biphasic symptoms: mental retardation in infancy and dystonia and Parkinsonism in adolescence or early adulthood [5]. The present case presented with Parkinsonism and mental deterioration at the age of 40, which is later than the average age of second progression in female cases. The timing of somatic mutation during development may affect the severity and age of secondary deterioration, with later gene mutation presenting with later and milder phenotype [1].

Differential diagnosis of the present case includes other NBIA disorders such as phospholipase A2-associated neurodegeneration (PLAN) and mitochondrial membrane protein-associated neurodegeneration (MPAN), as they also show mental retardation and Parkinsonism with iron accumulation in basal ganglia [6]. However biphasic symptoms and hyperintense signal of the substantia nigra with a central band of hypointense signal in brain MRI is quite characteristic of BPAN and the final diagnosis was made genetically.

Some of the present authors previously reported aWDR45 mutation different from that of the present case in a patient showing clinically Rett syndrome [7]. The present case did not show most of pathognomonic features of the syndrome including loss of acquired purposeful hand skill and language, gait abnormalities and stereotypic hand movements. Therefore clinical diagnosis of Rett syndrome was excluded.