A methane is assimilated by the methanotrophs: these bacteria use the methane as their sole and unique carbon source to satisfy their metabolic needs. In addition to the methanotrophic population, the availability of nutrients (mainly as nitrogen and phosphorus elements) and supportive operating conditions, such as the moisture of the packing material, the gas superficial velocity and the inlet CH4 concentration, are all to be accounted for among the factors needing to be closely controlled for operating a successful bioprocess. During the past 3 decades, several mathematical models dealing with the biofiltration of pollutants, such as volatile organic or inorganic compounds, have been developed in order to predict the efficiency of the bioprocess and the behaviour of the pollutants, and products. In general, models take into account physical, chemical and biological phenomena occurring in biofilteration such as diffusion, mass transfer of the pollutants and biodegradation kinetics, which have been described in detail in the review conducted by Devinny and Ramesh [1].

Mohseni and Allen [2] have reported that the constituents of the biofilm have a significant impact on the solubility of the hydrophobic substrates in the biofilm. In their view, air/biofilm distribution coefficient, which accounts for the lipophilic characteristics of the biofilm, should be used, instead of the usual air/water distribution coefficient, for modeling the biofiltration of hydrophobic VOCs. Important parameters, mathematical modeling of biofilters looks quite challenging. Kiranmai et al. [3] have applied the differential evolution method for determining the biokinetics in their fixed-film reactor modeling problem.

Among these researches, the direct route that converts methane into high hydrocarbons in one step by the oxidative coupling reactions is more economically attractive and consequentially has been thoroughly studied [4,5]. The mathematical modeling of catalyst pellet in OCM process which is considered the heart of catalytic fixed bed reactor is the most important model used in describing the behavior of fixed bed reactor [6-17].

Many important physical phenomena on the engineering and science fields are frequently modeled by nonlinear differential equations.

However, to the best of our knowledge, till date there was no rigorous analytical expression of the concentrations for methane and carbon dioxide in a closed biofilter for all possible values of reactiondiffusion parameters have been reported [17]. The purpose of this communication is to derive approximate analytical expressions for the concentrations methane and carbon dioxide for all possible values of parameters using new approach of homotopy perturbation method.

The general assumption of the mathematical models for methane bioelimination involving the closed biofilter is described [17]. Figure 1 denotes the phenomena occurring within the biofilter and considered in the present model. It contains the two components CH4 and CO2 through the gas phase and biofilm phase. During steady state operations, there is no accumulation of the pollutant, of the by-products or of the products within the biofilter. The general mass balances within the gas phase involve essentially three terms: an accumulation term, a convection term, and a mass exchange term through the interface of the gas phase with the biofilm. Within the biofilm phase, CH4 becomes biodegraded, forming CO2 among others. The mass balances equation of CH4 and CO2 gives as follows [17]: 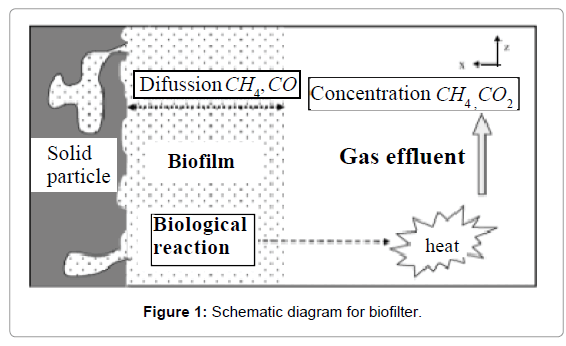 The boundary conditions are:

where SCH4 and SCO2 represents the concentration of methane and carbon dioxide in the biofilm phase. Xb and Km represents density of biomass in the biofilm and Monod constant. H(T) depends on the temperature T in °C, K(T) is the temperature dependent maximum substrate utilization rate and s is the consumption rate of CH4. The concentrations CH4 and CO2 within the gas phase described by the following equation:

Also solving Eqns. (6-7) and (8-9) using the analytical method, we can obtain the concentration of CH4 and CO2 in the gas phase are as follows: 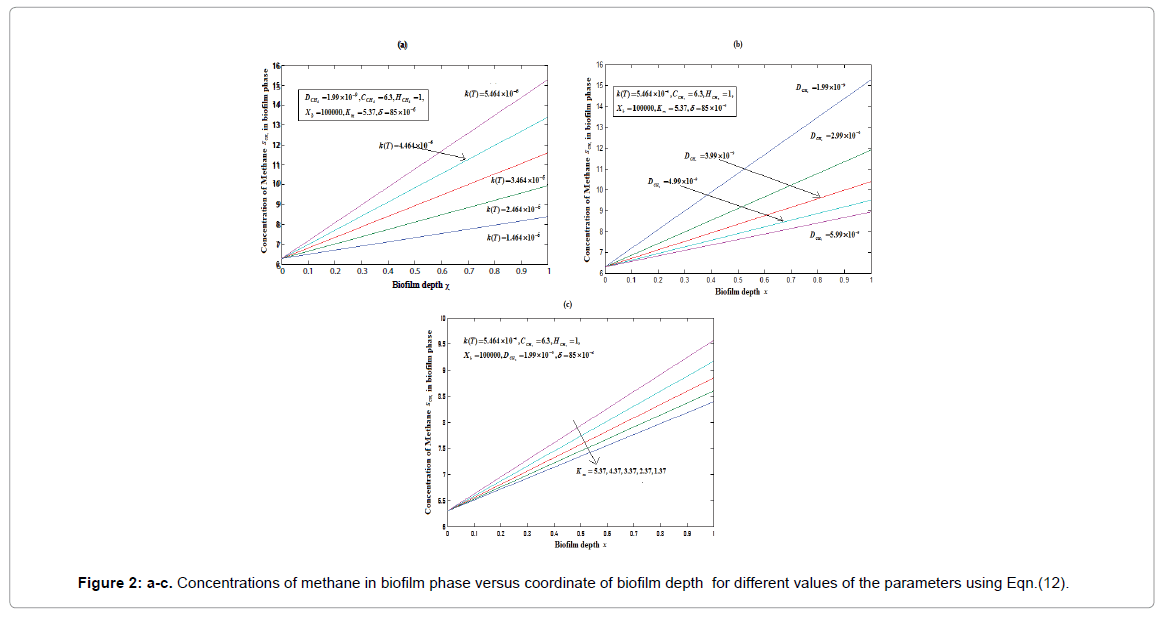 Figure 2a-c: Concentrations of methane in biofilm phase versus coordinate of biofilm depth for different values of the parameters using Eqn.(12). Figure 3: a-d: Concentrations of the Carbon dioxide in biofilm phase versus coordinate of biofilm depth for different values of the parameters using Eqn.(13).

Table 1: Numerical value of parameters used in this work. 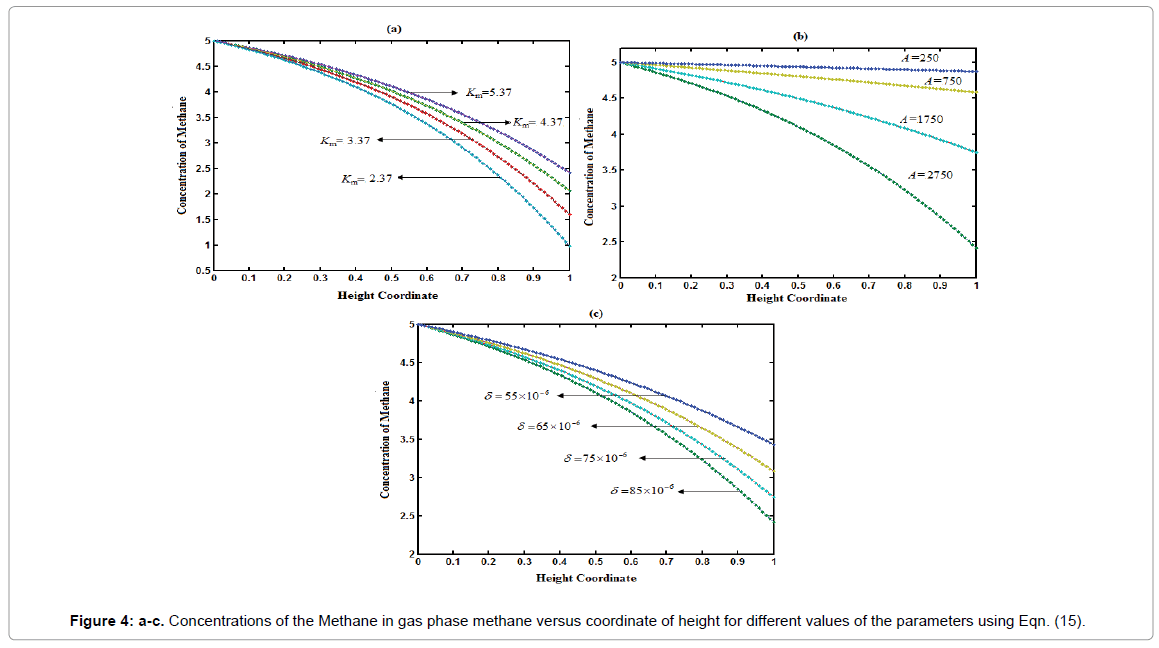 Figure 4: a-c. Concentrations of the Methane in gas phase methane versus coordinate of height for different values of the parameters using Eqn. (15). 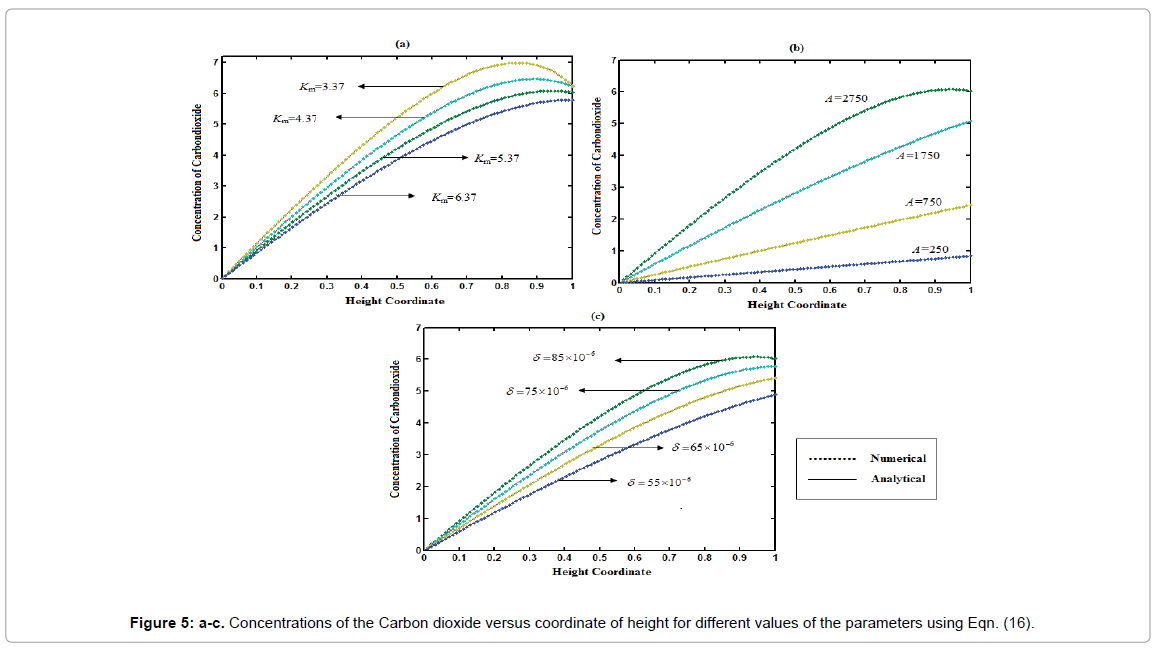 Figure 5: a-c. Concentrations of the Carbon dioxide versus coordinate of height for different values of the parameters using Eqn. (16).

In this paper, steady-state of solutions of a nonlinear reaction equations arising in elimination of methane has been studied. The theoretical model of biofilms Monod-type inhibition kinetics for the steady state condition is discussed. The nonlinear differential equation for methane and carbon dioxide has been solved analytically using the new homotopy perturbation method. The obtained results have a good agreement with those obtained using numerical methods. Theoretical results obtained in this paper can also be used to predict the response of biofilms.

Copyright: © 2018 Rani FMJ, et al. This is an open-access article distributed under the terms of the Creative Commons Attribution License, which permits unrestricted use, distribution, and reproduction in any medium, provided the original author and source are credited.