ISSN: 2090-9888
Lovotics
Make the best use of Scientific Research and information from our 700+ peer reviewed, Open Access Journals that operates with the help of 50,000+ Editorial Board Members and esteemed reviewers and 1000+ Scientific associations in Medical, Clinical, Pharmaceutical, Engineering, Technology and Management Fields.
Meet Inspiring Speakers and Experts at our 3000+ Global Conferenceseries Events with over 600+ Conferences, 1200+ Symposiums and 1200+ Workshops on Medical, Pharma, Engineering, Science, Technology and Business

Copyright: © 2014 Lanza D. This is an open-access article distributed under the terms of the Creative Commons Attribution License, which permits unrestricted use, distribution, and reproduction in any medium, provided the original author and source are credited.

In the next years we will be witness of the arise of an unique new kind of art born from the symbiosis of two brains working together: the human creative right hemisphere associated with the massive computational ability of the computer brain. It will be the first time in human history in which the production of art will not rely on the solely human intelligence working alone, but on the collaboration of two entirely different entities working as equals. This work explores some examples of this new form of art that will shape the aesthetics of our future society.

In the throes of the digital revolution, the times when creation of art -understood as the most sophisticated expression of human creativity- is performed by human intelligence alone is reaching its end. The massive “evolution” of the computer cerebral capacity -not here by the means of natural selection but by the means of human developments and its industrial needs is reaching to a point in which human and computer brains can be considered, if not yet equivalents, at least team members in innumerable examples on today society. And although the creative human capacity has not been matched by any artificial device, the computer massive mathematical and rational capabilities have surpassed by far our organic abilities in that areas [1]. This converging evolution is leading us to a moment in when machines, further than merely subordinates, will team us as partners in a collaborative association, and we could delegate the left hemisphere tasks -logical [2], analytical, mathematical, objective- to an artificial brain and leave ours to purely right hemisphere tasks -intuition, creativity, innovation, subjectivism, abstract thinking- that would eventually leave room with enough time to a wider development of our creative hemisphere [3]. The present work explores this particular symbiosis that is reaching one of the most genuinely human fields: the production of art by the means of the collaboration of human creativity and computer analysis, further than the usual tool role but participating as partner on an interdependent association [4]. The results have exceed our expectations in beauty, sensitivity, subtlety and soulful.

To materialize this human-computer creativity research we chose a natural element -light- and use it as the ground subject on this exploration of the boundaries of this collaborative effort. Our approach was to set up the initial conditions on a 3D software and let the computer evolve that initial conditions to their end, rejecting all the meaningless results [5]. It is crucial to remark that we are not after those cold typical digital fractal patterns easy to draw with a graphic software, but after something as sensitive and truly emotional as pure human artwork can be but which wouldn’t be produced by other means.

Formally speaking, we materialized this research by focusing on the way in which light is bent and deformed by transparent objects, and the resulting emotional effects that this beams can produce. We’ve isolated the light phenomenon by reducing objects and volumes to the bare minimum to allow light itself, with its presence and nuances produced by the bends forced by the computer, to be the main protagonist. The result is a strong, coherent collection of artworks in which we see light that has been distorted, refracted and bent, and which in turn acts upon, and in a sense also deforms, the space around it (Figures 1 and 2).

Figure 1: Preliminary sketches for recreating the bending of light. 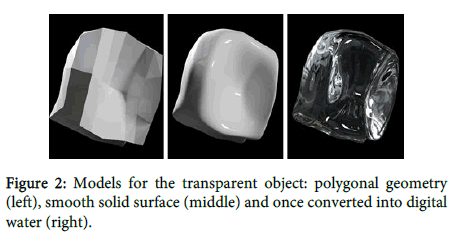 Caustics, in optics, the envelope of light rays reflected or refracted by an external object.

Even though the process happens entirely inside a digital medium, in a 3D software program, we commenced by replicating the exact initial conditions that produce this phenomenon in nature, down to the last detail. To produce caustics, a 3D object made of water or glass -that is to say, digital water or digital glass- was needed in the scene, but it had to remain invisible in the final result. We began by creating a kind of giant water droplet, and then deforming it in an organic way until it began to cast irregular, asymmetrical caustics.

This became a very delicate process, in which a tiny change to one vertex in the original shape would dramatically change the way the light fell, resulting in a radically different caustic effect. Thus, the process basically consisted in deforming the object, making the computer calculate the resulting light distortion and most often rejecting all the random results, leaving only those transformations which produced a luminous pattern with the serene, suggestive beauty that can proof it as a sensitive piece of art in its own right. Most of the time the resulting images weren’t interesting at all, just random patterns like those you get when you put a glass of water in the sunshine. But then suddenly, after a very slight alteration, a vibrant, harmonious caustic appears. At that very moment the image shines, it speaks for itself. The setup of the initial conditions can be done in a few hours, but finding a deformation that generates a special meaningful highlight could take days or even weeks.

Another input of human interaction in the initial conditions was the alteration of the refraction index of the transparent object -the physical property responsible for the bending angle of the light inside a transparent object- that can cause a completely different light deformation depending on the substance used.

The resulting output light -at times appearing like a fiery glow, almost a watery sun, and at others bent into delicate, subtle, airy rays- created images which are silent but powerful.

The refracted light, moving abruptly and delicately, streams through space in a way both beautiful and intriguing. The scene is then scattered with the deformed light patterns that spill over it, distorted by the computer calculations. The light, thrown onto a rough surface, reveals the imperfections of that surface, like a clean and transcendent light shining on a harsh and imperfect world. Paradoxically, the only way to perceive the spectacular bends in the light is by observing it on this rough, rigid and rugged surface, without which the phenomenon would be completely invisible.

The images obtained after the computer intervention-all named “vision number #” to avoid biasing the viewer perception-preserve a powerful charisma while retain a certain familiarity despite their digital nature, in the edge between the realistic and the abstract (Figures 3 and 4). 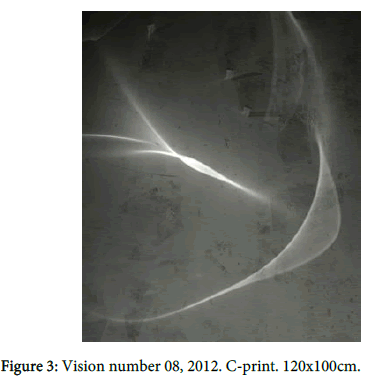 The most significant element of these images, however, is not the spectacular luminosity that first catches your eye. The only physical presences in the scenes are small objects -stones, cylinders, monoliths. These primitive structures, which recall totems, or the earliest manmade structures, are scattered timidly here and there, and introduce a sense of eternity and spiritual experience, with references that takes back to human ancient rituals. Paradoxically, although these images have been painted by a computer, the intimate experience they offer connects us with those fundamental emotions that make us human in the first place: ecstasy, anguish, revelation, and awe at the brute force of that which we do not understand. In all these images, we sense both silence and vastness, small scale and large, a silent apotheosis which brings us face to face with eternity: what got finally depicted here is an eternal theme, seen for the first time through the eyes of a computer. The random motions and subtleties of these forms invite from us a calm, intimate and prolonged scrutiny, and seduce us into a complete immersion. The fascination of these images is in their many nuances and in their intriguing beauty, inviting us into an exchange between viewer and painting which we feel compelled to join (Figures 5 and 6). 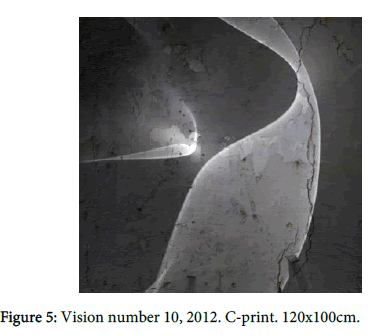 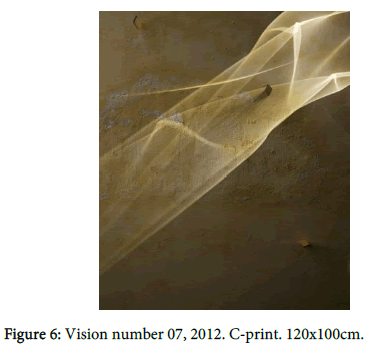 The present experiment demonstrates a potential collaboration of the computer on a genuinely human activity such us the creation of art [6]. The particularly logical computer brain would replace our left hemisphere on pure analytic tasks and leave ours to right hemisphere thinking -intuition, creativity. As any organism needs both hemispheres, this symbiotic collaboration could shape our creative processes and surely transform the way we will produce art in the years to come [7].

By setting the initial conditions and putting the computer to calculate their evolution -materialized here in the deformation of a beam of light- we man and machine together were able to obtain a consistent body of artworks whose beauty, subtleness and feeling could match those in pure handmade art. The power of these images and their delicate aesthetic demonstrates the success of this association.