A Rare Case of Pancreatitis, Panniculitis and Polyarthritis: The P-P-P Syndrome

Copyright: © 2015 Fabbri D, et al. This is an open-access article distributed under the terms of the Creative Commons Attribution License, which permits unrestricted use, distribution, and reproduction in any medium, provided the original author and source are credited.

A 70-year-old man was admitted to our Unit because of the onset of symmetric joint pain, and multiple cutaneous erythematous nodules localized to the lower extremities and gluteal region. An arthrocentesis excluded a septic arthritis and systemic and local steroid therapy resulted in a modest improvement of symptoms and cutaneous manifestations. For an acute abdominal pain with an elevation of serum amylase and lipase levels, the patient underwent an abdominal CT that showed a 55 mm roundish mass in the head of the pancreas with necrosis and colliquation, associated with dilatation of the main pancratic duct and thrombosis of the superior mesenteric vein. The pancreatic lesion was biopsied during an endoscopic ultrasonography and the histopathological examination documented a chronic obstructive pancreatitis. Taken together, the clinical manifestations shown by this case highlighted a rare condition referred to as “PPP (i.e. pancratitis, panniculitis, polyarthritis) syndrome” which links pancreatitis to extrapancreatic tissue involvement.

Chronic pancreatitis is an inflammatory process progressively evolving to gland insult with major remodeling of the pancreatic parenchyma. This tissue damage in chronic pancreatitis leads to exocrine and endocrine dysfunction. Several risk factors have been identified, altrough in a non-neglegible percentage of patients the disease remains idiopathic in origin. The primary clinical manifestations of chronic pancreatitis are abdominal pain and recurrent episodes of pancreatitis, while pancreatic insufficiency appears in the late stage of the disease. Rarer complications, such as extrapancratic tissue involvement including panniculitis and arthritis, may also occur. The concomitant association of chronic ancreatitis, skin involvement and joint inflammation is referred to as "pancratitis, panniculitis, polyarthritis" (PPP) syndrome [1-6]. In this very rare cases, the diagnosis of pancreatitis can be dealyed because of the presence of mild abdominal pain and the predominance of cutaneus and articular manifestations [1,7-11]. We herein describe the case of a man with this rare syndrome to show the importance of an early diagnosis which is crucial for the prognosis of this generally fatal clinical association.

A 70-year-old man was admitted to our Internal Medicine Unit in April 2013 for the onset of symmetric joint pain. He was smoker and a habitual alcohol drinker (more than 1 L / day since many years). On admission, clinical examination revealed multiple cutaneous erythematous nodules (1-5 cm in size) localized to the lower extremities and gluteal region, with some of them evolving into necrotic abscesses, spontaneously ulcerating and exuding 'fatty material'. Physical examination of the abdomen and the cardiorespiratory systems was unrelevant and vital signs were normal. Laboratory tests showed a remarkable leukocytosis (WBC: 18,000 / mmc, neutrophilis 91%) and a prominent increase of inflammatory indexes (C-reactive Protein: 17.3 g/dL, n.v. <0.80). An autoimmunity profile (ANA, ENA, anti-DNA, rheumatoid factor, anti-CCP, ANCA, C3 and C4, streptozyme test) and oncomarkers were all negative. Also, the patient complained of severe pain involving bilateral ankles, knees, shoulders and elbows joints associated with evident swelling. X-Ray evaluation dis not show any articular / bone changes, while the arthrocentesis demonstrated a yellowish synovial fluid which was negative for bacteria or other infections and therefore excluding a septic arthritis. Systemic (methylprednisolone, 60 mg daily) and local (intrarticular) steroid therapy resulted in a modest improvement of pain.

An abdominal CT (Figure 1) showed a roundish mass of 55 mm in diameter in the head of the pancreas with necrosis and colliquation. This finding was associated with dilatation of the main pancratic duct and thrombosis of the superior mesenteric vein. The pancreatic lesion was biopsied during an endoscopic ultrasonography (EUS) and the histopathological examination documented a chronic obstructive pancreatitis (Figure 2). Based on the clinical and biochemical alterations we concluded that an acute pancreatitis developed on a chronic disease and that was complicated by a bulky pseudocyst. Meanwhile, the histopathological analysis of the erythematous nodules showed necrotic areas containing “ghost-like” fat cells, a typical feature of pancreatic enzyme-related panniculitis. Due to these findings and the worsening of the clinical picture, steroids were stopped. The risk of a neoplastic component in the pancreatic lesion prompted a rapid referral to surgery. The patient underwent a laparotomic examination disclosing a chronic pancreatitis and a massive post-necrotic pseudocyst connected to the main pancreatic duct. An intraoperative US and histopathology confirmed the existence of a chronic obstructive pancreatitis. The procedure consisted of thorough drainage of pseudocyst content (mainly necrotic tissue) followed by a manual latero-lateral Wirsung-pseudocyst-jejunal anastomosis. In the postoperative phase the patient developed a severe septicemia and, although under an intensive care unit regimen, he died five days after the operation. 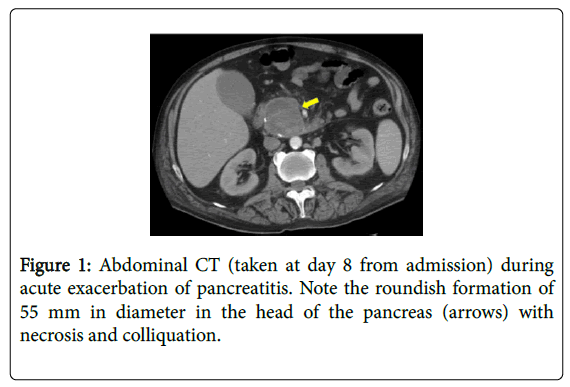 Figure 1: Abdominal CT (taken at day 8 from admission) during acute exacerbation of pancreatitis. Note the roundish formation of 55 mm in diameter in the head of the pancreas (arrows) with necrosis and colliquation. So far, only 30 cases of PPP syndrome have been reported in the literature. The pathogenesis of this syndrome is still uncelar, although it is widley accepted that pancreatic enzymes, released into systemic circulation, may lead to lipolysis and secondary inflammation in peripheral tissues, like subcutaneus tissues and joints [7,12-14].

Although mainly acute [1], chronic chronic pancreatitis can occur [14-17] in this syndrome as highlighted by this case, while the association with pancreatic adenocarcinoma is quite rare [2]. Panniculitis is usually characterized by erythematous nodules, more frequently localized at the lower limb that can evolve into necrotizing abscess [3-5,18]. The clinical manifestation of pancreatic panniculitis is, however, nonspecific and therefore histopathology of skin lesions is mandatory to unravel, as in this case, pathognomonic hallmarks such as anucleated adipocytes with a thickened shadowy wall and granular basophilic cytoplasm (hence “ghost-like cell” adipocytes) [14,18,19].

Joints can be involved at any level in the PPP syndrome although the number can be quite variable: likewise in our experience, most of the reported cases indicated a symmetric or asymmetric polyarthritis [1], although oligoarthritis and monoarthritis have been also described [16].

The treatment of PPP syndrome is aimed to resolve the pancreatic disease and that is why we referred our patient to surgery. Nonetheless, supportive measures are also important and include fluid / electrolyte replacement, adequate pain control and, if necessary, nutritional support. Steroids and non-steroid anti-inflammatory drugs can only alleviate symptoms related to skin lesions and arthritis [1].

A posteriori, we can conclude that a more rapid diagnosis would have resulted in a better outcome of this patient. Nonetheless, a careful analysis of this case raises some considerations. First, the paucisymptomatic onset of the PPP syndrome was clinically misleading as the patient, despite his clinical history indicated a habit to alcohol consumption, did not complain any symptom suggestive of a pancreatic disorder; secondly, we were unable to establish a clear link between the detected skin lesions to an underlying pancreatitis which was possible after an acute exacerbation of an obstructive pancreatitis, secondary to the large-size pseudocyst obstructing the Wirsung duct; thirdly, the quite rapid progression of the disease which prevented an appropriate timing for referring the patient to surgery. In conclusion, the present case confirmed that, although rare, the PPP syndrome could occur in acute and chronic pancreatitis setting. The latter may have acute re-exacerbation responsible for extrapancreatic (systemic) associations. The clinician should be always aware of the PPP syndrome as it early recognition is crucial for an appropiate management, referral to surgery (if needed) and better outcome.

All authors approved the final version of the article, including the authorship list. The authors declare that they have no conflict of interest.