There has been a significant increase in the number of patients with Prostate Adenocarcinoma (PCa) over the last decade, leading to a substantial rise of pre-transplant patients with a history of cured PCa. Currently, Radical Prostatectomy (RP) and brachytherapy using isotope seeds are good alternatives for treatment of localized low risk PCa. In this case, we performed a cadaveric renal transplantation for a patient who 7 years previously underwent radioactive seed implantation therapy for low risk PCa, as defined by the D’Amico classification system. The patient was a 66-year-old man with a history of hemodialysis for 24 years. Although radiation therapy can cause unfavorable inflammatory changes such as adhesions, we did not encounter any intraoperative difficulty, and the postoperative course has been uneventful and serum prostate specific antigen has remained undetectable even about 2 years after the transplant. In conclusion, We suggests that the brachytherapy for localized low-risk PCa seems to be a valid option for patients awaiting renal transplantation, and its lower invasiveness can be of great advantage to such PCa patients because the pre-transplant population often has a higher risk of perioperative complications due to longterm dialysis. However, careful perioperative anesthesia management is essential to perform the procedure for such potentially high risk patients.

Studies have demonstrated that the risk of developing malignant disease in chronic kidney disease patients is 3–13% higher than in the general population [1-3]. Prostate Adenocarcinoma (PCa) is the most common noncutaneous malignant tumor in men in Western society, and it is the second leading cause of cancer-related death in men in Japan [4]. Because a greater portion of the Japanese population is elderly and as a result of routine Prostate-Specific Antigen (PSA) testing, it is anticipated that a substantial rise will occur in the number of pre-transplant patients with a history of pre-existing PCa.

PCa presents a unique challenge to patients awaiting organ transplantation because there are no clear guidelines for PCa treatment in the pre-transplant population [5]. Currently, Radical Prostatectomy (RP) and prostate brachytherapy using isotope seeds are the most commonly used methods for treating low-risk PCa, as defined by the D’Amico classification system [6-9]. In the case reported here, brachytherapy was performed successfully based on the patient’s preference, and he was followed without PSA relapse for 7 years before the transplantation. Although radiation from the seeds travels a very short distance, allowing normal tissues that are close to the prostate to be less damaged, many reports have noted that previous pelvic radiotherapy can cause increased technical challenges in surgical treatments [10-12]. Therefore, when performing a transplant in such patients, surgeons must anticipate, for example, difficulty of exposure in the surgical field and postoperative urinary complications, such as insufficient enlargement of bladder capacity and urethral stricture. Here, we describe a concrete case report of cadaveric renal transplantation into a recipient with a history of radioactive seed implantation therapy for localized PCa.

A 66-year-old man with end-stage renal disease caused by chronic glomerulonephritis underwent renal transplantation at Kitasato University Hospital in January 2013. The brain-dead donor was a 55-year-old woman with a subarachnoid hemorrhage. Typing of human leukocyte A, B, and DR antigens indicated two mismatches (Table 1). Although the patient had been on hemodialysis for 24 years, preoperative examination revealed no abnormalities outside the acceptable range, except a history of successfully treated PCa by brachyradiotherapy.

Seven years prior to the transplantation the patient had low-risk PCa, as defined by the D’Amico classification system, and a radioactive seed implantation therapy was performed. The brachytherapy was done successfully without any complication and he was discharged on postoperative day (POD) 2. He did not experience biochemical failure of PCa, and serum PSA had been cancer recurrence for more than 5 years, the cadaveric transplantation was performed in our hospital after the patient gave his full informed consent.

Immunosuppression was induced with basiliximab (20 mg; just before induction of anesthesia and on POD 4), methyl-predonisolone (1000 mg just before the arterial clamp was removed plus 250 mg on POD 1), mycophenolate mofetil (1000 mg; just before the transplantation), and tacrolimus extended release (0.15 mg/kg). The steroid dose was gradually reduced to 2.5 mg/day at the end of postoperative month 1.

The donor’s right kidney was transplanted into the right iliac fossa in the usual manor without any difficulty. The total ischemic time was 407 min, and urination after reperfusion was excellent (Table 2). Because the recipient had long-term anuria for about 20 years due to 24 years of hemodialysis, the bladder capacity was only 20 cc. Although we had been concerned about the influence of the prior radiation therapy on the operation, no inflammatory change in the pelvis was identified and adhesions of connective tissue surrounding bladder were not striking at all. The bladder was sufficiently mobile, and the extravesical ureteroneocystostomy (Lich-Gregoire method) was done successfully. Finally, there were no intraoperative complications and the surgical outcome was similar to that in recipients without a history of radiation therapy. The operation time was 290 min and blood loss was 345 cc without any blood transfusion.

Because the postoperative course was uneventful, oral intake was started the day after the operation. A drain placed in the pelvic cavity was removed on POD 6, after confirming that leakage from the drain did not increase after a 16-Fr urethral catheter had been removed on POD 5, following our protocol. The bladder capacity enlarged over the postoperative course, reaching about 100 cc on POD 45 and 200 cc at 6 months after the transplant. Major postoperative complications such as vesicoureteral reflux and urinary tract infection have not been found, and the graft function has been stable, with a serum creatinine level of 1.08 mg/dl about 2 years after the transplant (Figure 1). Furthermore, no PSA recurrence was seen about 2 years after the transplant (PSA has remained in the undetectable range). 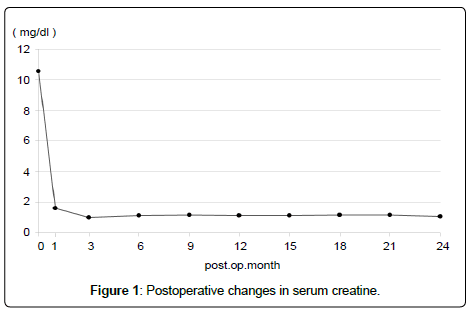 In general, previous pelvic radiotherapy can present increased technical challenges in surgical treatments. For instance, a certain extent of obliteration of standard dissection planes in the pelvis after radiation therapy is often encountered [10], which can lead to unreasonable blood loss and longer operative time and consequently high rates of perioperative complications. Schuster et al. [10] retrospectively reviewed 29 patients who underwent radical cystectomy after radiation therapy or RP, and the former group showed a greater rate of complications compared to the latter (65% vs. 44%). Other investigators also reported relatively higher complication rates in patients with pelvic radiation prior to cystectomy (48–53%) [11,12]. Although the precise etiology remains unknown, these unfavorable consequences could be easily explained by fibrosis and adhesions resulting from radiation.

However, seed implants have a unique feature in terms of the emission of γ rays. Each seed emits a very low level of radiation that can only penetrate a few millimeters of tissue. Therefore, the surrounding structures that can be damaged by radiation are relatively limited. Indeed, in a retrospective analysis of 305 Japanese men with low- or intermediate-risk PCa who underwent 125I monotherapy at our institution, the mean dose to 90% of the prostate volume at 1 month was 173.4 Gy and the prostate volume receiving at least 100% dose at 1 month was 95.8%. Reflecting these acceptable results, the late Grade 3 genitourinary toxicity rate was a 2.0%, and no patients displayed late gastrointestinal toxicity of Grade 3 or worse [13]. This is consistent with multi-institutional prospective cohort study [14]. Hence, as we described in this case, we believe that radioactive seed implantation therapy has little possibility of causing unfavorable changes during the perioperative period of renal transplantation because of its limited range of irradiation.

Furthermore, brachytherapy has another feature of interest. Despite a significant improvement in the treatment of PCa, few randomized controlled trials have supported the superiority of any one option in terms of cancer control [15,16]. Currently, RP and radioactive seed implantation therapy are the most commonly used methods for treatment of localized low-risk PCa [6,7]. In patients waiting for renal transplantation, however, seed implantation may need to be taken into consideration more as a treatment of the PCa, because seed implantation therapy itself is less invasive than RP and such patients tend to be at higher risk of surgical complications such as cardiovascular problems due to long-term history of hemodialysis, especially in Japan, where the mean waiting time for transplant from a deceased donor is more than 15 years [17].

Although radioactive seed implantation therapy has been globally accepted as an effective treatment, especially for localized low-risk PCa, despite it being introduced only a decade ago [6,7,13,18], there are valid concerns about secondary malignancies after the therapy. Patients who receive radiation therapy may be at an increased risk for developing secondary cancers compared with patients who do not receive radiation therapy [19,20]. In an analysis of 46,226 men with PCa having a history of more than one radiation therapy, bladder cancer occurred after brachytherapy at a mean of 10 times more often than other cancers [21]. This finding reinforces the need for regular screening for bladder cancer because of potential tumor recurrence in renal transplant patients under immunosuppression.

The second concern arises in terms of the results of solid organ transplantation in patients with a history of pre-existing PCa. Woodle et al. performed an extensive analysis of 90 transplant recipients with a history of PCa and found that stage I and II PCa patients underwent transplantation with an acceptable risk of the recurrence (14% and 16%), whereas stage III patients showed an increased risk of recurrence (36%) [22]. Reported experience with pre-existing PCa is limited, however, and further studies are needed to decide whether PCa precludes solid organ transplantation [23,24].

We describe a case of the renal transplantation from a deceased donor to a patient with a history of radioactive seed implantation therapy for localized PCa. We encountered no technical challenges during the operation that may have been caused by the brachytherapy, and postoperative complications and biochemical failure of PSA have not arisen about 2 years after the surgery. Our experience suggests that radioactive seed implantation therapy for low-risk PCa, as defined by the D’Amico classification system seems to be a valid option for patients awaiting renal transplantation, because such patients have a higher risk of perioperative complications due to hemodialysis during the long waiting time for cadaveric transplant, and its lower invasiveness can be of great advantage. However, careful perioperative anesthesia management is essential to perform not only RP but the brachytherapy for such potentially high risk patients.

Copyright: © 2016 Koguch D, et al. This is an open-access article distributed under the terms of the Creative Commons Attribution License, which permits unrestricted use, distribution, and reproduction in any medium, provided the original author and source are credited.