Copyright: © 2014 Robinson LE, et al. This is an open-access article distributed under the terms of the Creative Commons Attribution License, which permits unrestricted use, distribution, and reproduction in any medium, provided the original author and source are credited.

Height and weight are important anthropometric measures used to derive age and gender specific body mass index (BMI) percentiles in youth (i.e., children and adolescents). If they are categorized as overweight or obese, their risk of chronic health issues is greatly increased [1-3]. For example, a review of 63 studies conducted by Friedeman and colleagues [4] indicated that overweight and obese children had significantly higher/increased blood pressure (systolic, diastolic, and 24 h ambulatory), total cholesterol, triglycerides, fasting insulin (obese only), insulin resistance (obese only), and left ventricular mass compared with normal weight children.

Height and weight are typically assessed in-person using specialized equipment. However, in epidemiological studies on youth, measuring anthropometrics is not often feasible, necessitating the use of self-reported heights and weights [5,6]. Evidence suggests that weight status (e.g., overweight) derived from self-reported heights and weights is related to adverse events such as suicide and poor health outcomes [7,8]. Despite these findings, little is known about discrepancies between self-report and measured heights and weights in youth. According to some studies, it is common to see misclassification of weight status based on BMI due to underreporting of weight [5,9-11]. The underestimating of weight may be associated with several factors including weight perception, sex, socio-economic status, and weight status [5,6,10,12-14]. Recently, Kreatsoulas et al. [9] determined the accuracy of self-reported height and weight measures in urban adolescents and young adults. Findings support that this population could accurately report their height and weight leading to a reliable BMI measure.

However, there is a need to extend upon these findings to further advance the literature along with the need to address this question in a more diverse population. African American youth living in low-income, rural areas of the U.S. are at-risk for obesity and related diseases [1,2,12,14,15]. The use of self-reported heights and weights would be very useful in this population; however, no studies have examined the validity of this approach, which is especially relevant for this group [12-14]. Therefore, the purpose of the current study was to establish the validity of self-reported height and weight in a sample of low-income African American youth residing in a rural area of the southeastern U.S.

Design: This cross-sectional study was part of a cohort study that assessed stages of behavior change for physical activity and healthy eating behaviors in rural pre-adolescent youth. According to the most recent US Census, participants were from a rural area and all attended a single elementary school located in the southeastern region of the United States.

Participants: At time of data collection, the school enrolled 316 students (52% females, 48% males) in grades K-6. Non-Hispanic Blacks (85%) were the predominant racial/ethnic group that attended the school. For this study, participants included youth enrolled in 4 – 6th grade (N=92, M age=10.16 ± 0.85 years; 58.7% female). A recruitment letter and consent/assent form was distributed to the caregivers of each student. Parental consent and child assent were obtained in accordance with the project protocol approved by the Institutional Review Board at Auburn University. Date of birth and race/ethnicity data was collected from school records. Data collection for the specific measures used in this study occurred over a span of 2.5 weeks.

Procedures: To eliminate any bias, self-reported and measured heights and weights were assessed during the participants’ physical education period on two separate days. On day one, they completed questionnaires in private and were asked to report their current height and weight as well as sex, date of birth, and race/ethnicity. Date of birth was confirmed with school records. On day two, measured heights and weights were collected by two trained researchers. The same researchers and equipment were used to collect all anthropometric measures. Additionally to ensure the reliability of measured weights, the scale was calibrated against 100 kg weight at the beginning of each data collection day.

Measures: Participants were asked to record their current height in inches (in) and weight in pounds (lb) on a data collection form, which was not visible to other participants or staff. Height measurements were made with a stadiometer (SECA Model 213) to the nearest 0.1 cm. Weight was recorded to the nearest 0.1 kg using a SECA Model 769 Digital Medical Scales (SECA Scale Corp, Munich, Germany). Shoes, coats, and other heavy outerwear were removed for all measurements. Participants were instructed to stand with their head aligned in the Frankfurt plane with shoulders relaxed and arms hanging freely by their sides as the measurements were being completed.

BMI Classification: Both self-reported and measured anthropometrics were used to calculate BMI according to the sex and age-specific growth charts for each participant. In accordance with the Centers for Disease Control and Prevention, all participants were assigned one of the following percentile classifications: “normal weight” (84th percentile and below), “overweight” (85th to 94th” percentile), and “obese” (95th percentile and above) [16].

All variables subjected to analyses displayed normal distributions. Self-reported and measured heights and weights are given in Table 1 for all participants together and Table 2 for non-overweight/obese and overweight/obese groups. Results are not presented by sex because no significant differences were found between boys and girls. For all participants, the means of self-reported and measured height were nearly identical differing by only 1.9 cm; however, self-reported height values displayed considerable variance compared to measured (26.7 cm vs. 8.9 cm). Height values obtained from the two methods were significantly but moderately correlated (r=0.32; p<0.05). Weights obtained from self-report were statistically significantly lower (-3.1 ± 7.7 kg) than measured weights (p<0.001) although the two values were highly correlated (r=0.88; p<0.001). 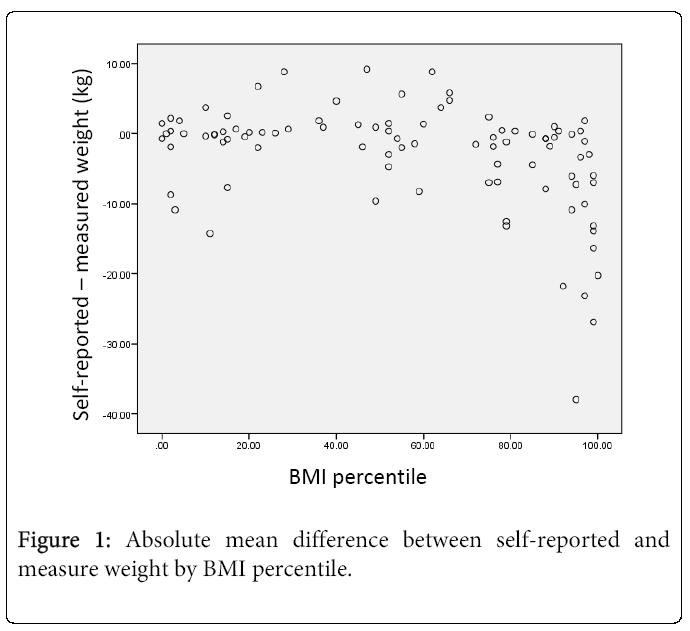 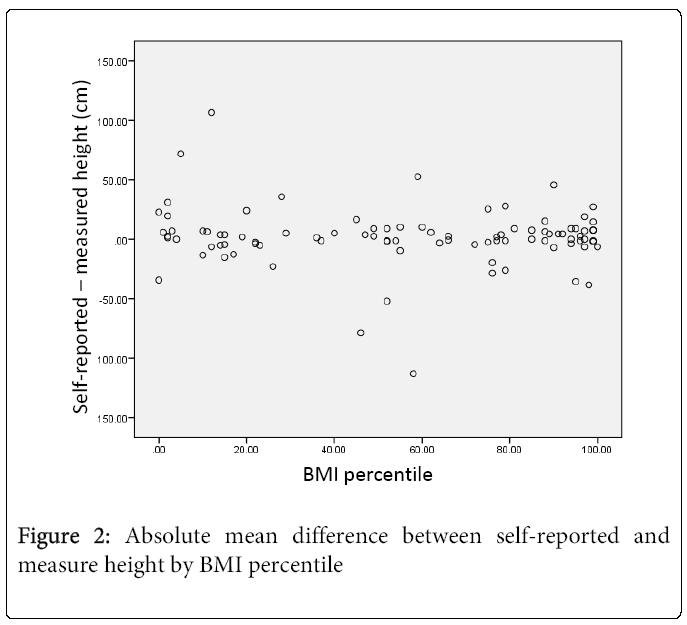 The purpose of this study was to validate self-reported height and weight in low-income, African American youth from a rural area in the southeast U.S. The main impetus for this was to provide support for the use of self-reported anthropometrics in epidemiological studies or large-scale surveillance efforts with this population. This is a highly warranted endeavor given the magnitude of the obesity epidemic and related co-morbidities experienced in this population. The results were less than encouraging for the use of self-reported heights and weights to derive BMI percentile related prevalence rates of overweight/obesity due to overweight/obese youth significantly under-reporting their weight.

Results of this study align with the recently published findings of Kreatsoulas et al. [9]. The results are also consistent with those of others regarding the under-estimation of weight and accurate report of height although some studies suggest height is over-estimated [10,11,17,18]. Additionally, these results correspond with other studies indicating that such errors are common across racial/ethnic subgroups of children/adolescents [10,11]. The propensity to underestimate weight appears to be associated with one’s ability to self-report weight/height and weight/height measurement history (i.e., recent weight measurement equates to a more accurate self-report; 6). As suggested by Rasmussen et al. [6] adolescents who are more likely to underestimate height and weight values can be identified by asking questions related to their recall ability on survey instruments. Data manipulation techniques (i.e., imputation) could be applied to “underestimators” in order to significantly improve accuracy; however, additional work in this area, is needed, especially with children [19].

As with all research, this study contains various strengths and limitations. This sample was taken from a population that suffers a disproportionate distribution of the obesity related burden. But the targeted population is also a strength that supports the need and feasibility for studying and monitoring the accuracy of self-report anthropometrics in this population. Furthermore, the participants in this study represent a single sample from a hard-to-reach population. Very few studies examine low-income, African American youth living in rural areas. This sample was relatively small and from only one school servicing one rural geographical area. A sampling scheme utilizing a larger number of schools and areas would convey a higher level of confidence when generalizing the results to similar youth residing in other low-income, rural areas.

Based on these results, the use of self-reported heights and weights for deriving estimates of overweight/obesity rates in lower-income, rural African American youth is not advisable. Additional work is needed to create methods for correcting self-report bias, which will most likely entail after-data acquisition techniques such as the creation of multivariable equations to more accurately predict particular measures, for example, BMI percentile.