Objective: To investigate the clinic pathologic features, diagnosis, differential diagnosis, treatment and prognosis of the pancreatic acinar cell carcinoma.
Methods: The clinical data, pathomorphology and immunohistochemical staining of one patient case of Pancreatic cell carcinoma with liver involvement treated by Pancreaticoduodenectomy and partial hepatectomy at the first Affiliated Hospital of Anhui Medical University in April 2016 was analyzed retrospectively.
Results: Iconography scan of the abdomen or the whole body demonstrated a pancreatic mass and liver masses, with celiac Lymph node enlargement in a 58-years old female.
Microscopic examination showed that the pancreatic and liver tumor cells were trabecular and micro-glandular arrangement by biopsy; tumor cells were round or polygonal, and cytoplasm was rich, eosinophilic and granular, and some parts were vesicular, nuclei were mostly located in the base and round and oval; a large number of eosinophil’s were found in the interstitial infiltrating, rich eosinophilic granules were also found in their cytoplasm, and nuclei were slightly atypia
Immuno-histochemical staining showed that tumor cells were CgA (-), α-ACT (+), NSE (+/-) Ki-67 (index about 15%) and Syn (-).
Conclusion: Although acinar cell carcinoma of the pancreas has distinct characteristics on imaging and elevated AFP, correct diagnosis was difficult to determine preoperatively according image logical and laboratory examination. We should consider pancreatic cancer in the differential diagnosis of similar cases.

Acinar cell carcinoma of pancreatic which was first descripted by Bener in 1908 is a very rare malignant of the exocrine pancreas, accounting for <1% of all primary pancreatic neoplasms, even though acinar cells occupy 85% of the volume of the pancreas [1,2]. Common clinical symptoms of acinar cell carcinoma include weight loss, abdominal pain, nausea, vomiting and other nonspecific symptoms [3]. Symptoms like fat diarrhea relating to the overproduction and release of lipase into the circulation are present in 10-15% of patients [4]. In summary, preoperative diagnosis of pancreatic acinar cell carcinoma is difficult, because it has no characteristic clinical symptoms, computed tomography (CT) examination and elevated serum markers.

In this study, we present a case of PACC with liver involvement underwent surgical resection of this disease at the first Affiliated Hospital of Anhui Medical University. Through a retrospective analysis of the clinical data, pathological features and prognosis of the patients help us clarify the diagnosis of acinar cell carcinoma and identify diagnosis of neuroendocrine tumors, solid pseudopapillary tumor and option the correct way of treatment.

A 58-year-old Chinese woman with no previous history of disease presented with discomfort in the upper abdomen and fatty diarrhea over a six-month period. She reported that there were no other symptoms and abnormal findings that occurred after physical examination except for 4 kg of weight loss in the last four months. Clinical examination revealed a large, firm, ill-defined mass in the head of pancreas.

An abdominal ultrasound show a 4.0 × 3.8 × 4.4 cm hypo echoic mass in the head of the pancreas and enlarged lymph nodes in the porta hepatic and retroperitoneal (5.2 × 4.5 cm). The mass was ill delimitated and heterogeneous. Contrast-enhanced CT showed a 4.0 cm mass in the head of the pancreas with pancreatic duct dilatation (1.3 cm) and parenchymal atrophy. The mass was adjacent to the portal vein and showed less intense enhancement than the pancreas. Dilatation of the bile ducts (1.3 cm), focal hepatic lesions or abdominal lymphadenopathies was found. The remainder of the liver demonstrated no evidence for chronic liver disease or additional mass lesion. 18F-fluorodeoxy glucose positron emission tomography (FDGPET)/ CT showed a high uptake of 18F-fluorodeoxy glucose in the head of pancreas (SUV 3.5) and the liver near the top of the diaphragm (SUV 3.2). The initial differential diagnoses were neuroendocrine with liver and lymphonodus metastases. A malignant pancreatic neoplasm, such as ACC, neuroendocrine tumor or Solid pseudopapillary tumor, was suspected from these findings, and surgery was therefore scheduled in (Figures 1 and 2). Figure 1: (I/II) Contrast-enhanced CT showing a mass (5 cm) in the head of the pancreas, which had less intense enhancement than the pancreas. (III) Involving the left of liver. (IV) Enlarged lymph nodes in the porta hepatis and abdominal. 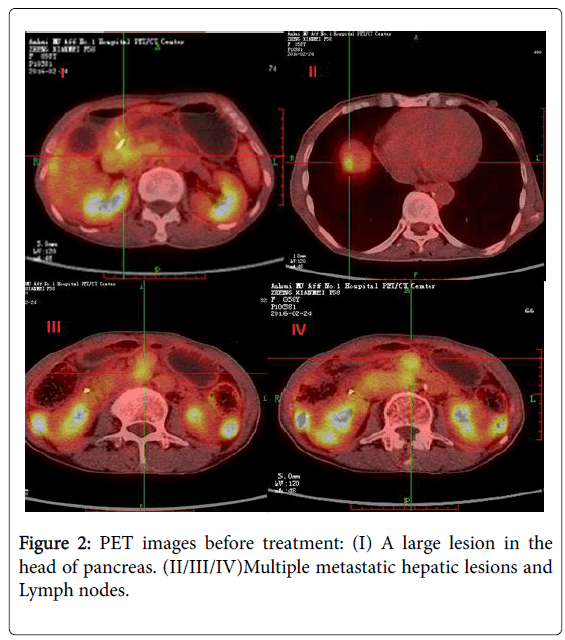 Figure 2: PET images before treatment: (I) A large lesion in the head of pancreas. (II/III/IV)Multiple metastatic hepatic lesions and Lymph nodes.

A Whipple procedure with partial hepatectomy was performed on the patient. Hepatic and lymph node metastases were recognized. On the cut surface of the resected specimen, the tumor could be seen in the pancreatic head. The surgical specimens consisted of an ill-defined lobulating mass of 6 × 5 × 4 cm which was confined to the pancreas, tumors of liver and several lymph nodes. Pathology revealed a moderately differentiated ACC in the pancreas with negative surgical margins. Histology image are consisted with neuroendocrine tumor or acinar cell carcinoma. Immunohistochemical staining results further confirmed that the tumor is acinar cell carcinoma with coagulation necrosis. Tumor involves wall full-thickness of bile duct and partial duodenal wall and a lymph node of duodenal serosa surface. Frozen paraffin regular reports that liver specimens show a size of about 2.5 × 1.5 × 2 gray nodules and microscopic examination of the tissue identified as hepatic metastatic acinar cell carcinoma. Immunohistochemical staining showed that tumor cells were CK (+), CgA (-), S-100(+), α-ACT (+), NSE(+/-), Ki-67 (index about 15%), CK7 (+), Syn (-) and so on Figure 3. 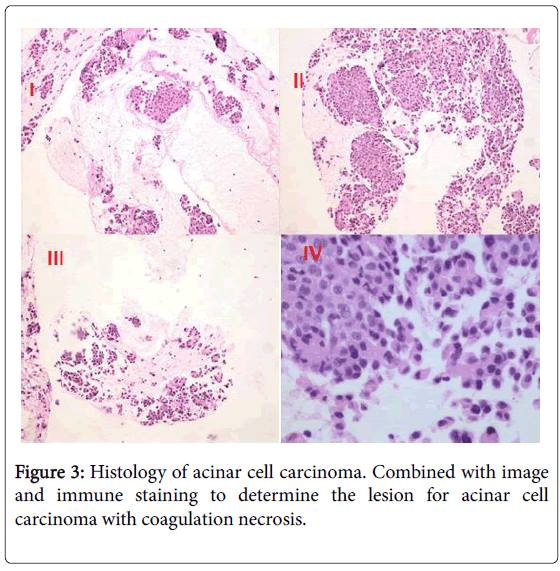 She received neither adjuvant chemotherapy nor radiation therapy after post operation and treated with Banmao. CA-199: 15.71 and CT were rechecked 6 weeks after. The patient is currently alive and well with no evidence of disease 6 months after initial diagnosis (Figure 4). Acinar cell carcinoma of the pancreas tumors generally occur in the 50 to 70-year age group [5]. Symptoms such as weight loss, abdominal pain, nausea and vomiting are nonspecific and are related mostly to either locally advanced tumors or metastasis [5-7]. According to the initial symptoms of diarrhea, lower abdominal pain and body weight loss as well as, B-mode ultrasound showed a well-defined tumor mainly at the head of the pancreas; PACC was difficult to make a diagnosis. Fifty percent of patients were found to have metastases, often invading adjacent organs (liver, duodenum, stomach, spleen) and another 25% of patients had metastasized after surgical resection of primary cancer. The most common metastatic site is local lymph nodes and liver, occasionally transferred to other parts [8].

Acinar cell carcinoma volume diameter is generally about 2-30 cm. The shape of the tumor is round or multi-nodular and clear boundaries of the soft mass [9]. Immunohistochemistry is helpful in the diagnosis of ACC. Trypsin, chymotrypsin, amylase, lipase immunohistochemistry staining can be positive, but the highest positive rate is trypsin in ACC [10]. In our patient, we can see that histological images showed solidified necrosis and immunostaining staining showed that CK7 (+), α-ACT (+), NSE (+/-).

The characteristics of CT images of ACC include exophytic growth, capsule, isodense solid component of tumor on non-contrast scan, mildly or moderately persistent enhancement on contrast scan, and the absence of pancreatic and biliary ductal dilatation [11].

Most acinar cell carcinomas are large with a mean size of 10 cm and are easily appreciated on radiologic examination. This case of patients with tumor size of about 3 cm. Computerised tomography and magnetic resonance imaging reveal well defined, large, round to oval masses that enhance homogenously less than the surrounding pancreas or show cystic areas [12]. In terms of PET/CT, typical acinar cell carcinoma was significantly elevated in FDG uptake, but cystic acinar cell carcinoma was slightly elevated [13]. Combined with the preoperative CT, PET/CT examination, the tumor does show a clear boundary with a cystic degeneration and weak FDG uptake of the mass in the pancreatic head. As we all known, this phenomenon is not specific imaging, so it is difficult to confirm the preoperative PACC.

Production of AFP has been reported as a possible marker of ACC, and CEA and CA19-9 were found to be positive in 18% and 41% of ACCs [7,14]. In the present case, serum levels of CEA and AFP were all within the normal range when multiple liver and lymph nodes metastases were found. Therefore, these markers (AFP, CEA), which are conventionally used as initial indicators of tumor, were ineffective in our patient. Although the CA199 indicator was significantly elevated, it was necessary for further exploration and validation as to whether it could be a marker for ACC tumors.

In this patient, we consider that the differential diagnosis of the tumor is a solid pseudopapillary tumor and neuroendocrine tumors. Imaging manifestation of solid pseudopapillary tumor of pancreas, similar with acinar cell carcinoma, is cystic solid, capsule and huge mass. Non-functional neuroendocrine tumor imaging can be expressed as cystic changes; it is also difficult to distinguish with the acinar cell carcinoma. NSE, CgA and Syn and other neuroendocrine markers diffuse positive. They almost always arise in young women [15].

Surgery is currently the best curative treatment for local tumors and has a statistically significant relationship with prognosis [4,16]. Surgical procedures depend on the size, location and extend of the tumor and so on. For distant metastases of the tumor, resection can be performed at the same time if it can be removed and the patient's physical condition is allowed [17]. In this case, patients with primary and liver metastases were smaller, and then take a surgical resection. Of course, some people suggested that FOLFIRINOX can be used as a first-line treatment for some cannot be removed PACC. Therapy with FOLFIRINOX resulted in a significant decrease of the primary tumor and repressiveness of a liver metastasis after chemotherapy [18].

In our patient, this relatively rare case of ACC with liver involvement was difficult to diagnose and therapy. The objectives of this study were to try to improve our understanding of the presentation, pathology, treatment, survival outcomes with PACC and help clinicians to make better preoperative judgments, improving the quality of life of patients. Nearly one year after surgery, the patient follow-up showed no recurrence and metastasis.

The authors wish to express their gratitude to Xiaoping Gen, from Department of General Sugery for advice on diagnosis and therapy.

Copyright: © 2018 Zhang X, et al. This is an open-access article distributed under the terms of the Creative Commons Attribution License, which permits unrestricted use, distribution, and reproduction in any medium, provided the original author and source are credited.