Copyright: © 2017 Than NN, et al. This is an open-access article distributed under the terms of the Creative Commons Attribution License, which permits unrestricted use, distribution, and reproduction in any medium, provided the original author and source are credited.

Gastrointestinal involvement of chronic lymphocytic leukaemia (CLL) is uncommon and acute GI bleeding as a result of CLL involvement is much rarer. We report a 77-year-old lady with known history of chronic lymphocytic leukaemia (CLL) presented to emergency department with haematemesis and melaena. Upper gastrointestinal endoscopy showed large necrotic looking area in the stomach with bleeding from necrotic area. Biopsies showed lymphoid infiltration and immunohistochemistry showed CD20+, CD5+, Cyclin D1- and CD23- which were similar findings to CLL from bone marrow biopsy.

1) Acute gastric bleeding from direct involvement of chronic lymphocytic leukaemia is a rare occurrence. It is important to get detailed past medical history and high suspicion of index is needed in patients with known underlying CLL.

2) Biopsies from gastric ulcers should be taken and in suspected cases, detailed immunohistochemistry staining should be performed.

3) Further studies are needed to understand fully on gastric involvement of CLL.

We report this case because acute gastrointestinal bleeding from gastric involvement of chronic lymphocytic leukaemia is rare and there had been only few reports found in literature [1-3].

A 77-year-old Caucasian lady presented to the hospital in May 2016 with haematemesis and melaena. On arrival, she was tachycardia and hypotensive with blood pressure of 96/66 mmHg and heart rate of 100 bpm in atrial fibrillation. Oxygen saturation was 100% on air. Details of blood tests on admission were shown in Table 1. Admission blood tests (Table 1) showed low haemoglobin of 67 g/l and raised urea 12.4 mmol/l consistent with upper GI bleed. Blatchford score was 14. Past medical history includes chronic lymphocytic leukaemia (CLL) diagnosed in January 2016, atrial fibrillation on Apixaban, mild bronchiectasis, old lumbar fracture and uterine fibroids. CLL was diagnosed with bone marrow (BM) trephine biopsy.

The BM biopsy showed heavy infiltration of lymphocytes and the immunophenotype of the neoplastic lymphocytes is consistent with CLL as characterised by the presence of CD20, CD79a, CD5 with negative CD3, Cyclin D1 and CD23 markers. P53 was not expressed.

She was resuscitated with intravenous fluids and blood products. After discussion with haematologist, INR was not corrected. She had upper GI endoscopy 24 hour of admission that showed large amount of blood clot in the stomach and hence, the view was limited. She was re-scoped the following day after the first endoscopy and the second one showed normal oesophagus, moderate amount of fresh blood in the stomach and mild duodenitis. There was also a large (5 × 10 cm) grey fleshy, necrotic looking area in the greater curve of the stomach with bleeding apparent from this area (Figure 1). Computed tomography (CT) was arranged post endoscopy which was later performed. CT scan showed significant abnormal looking lymph nodes in the right iliac colic mesentery, the largest of which measures 2.1 × 1.8 cm (Figure 2A). 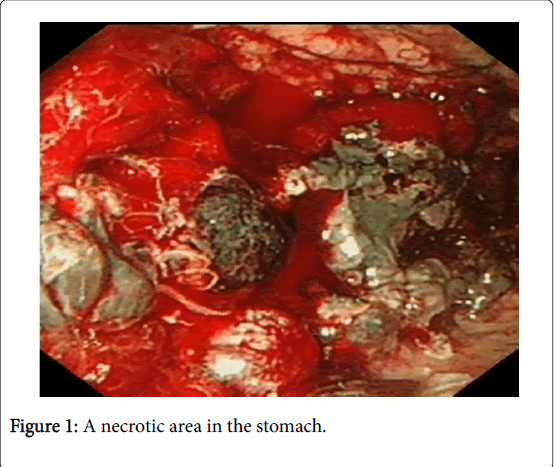 Figure 1: A necrotic area in the stomach.

Figure 2: A) An abnormal looking lymph nodes in the right iliac colic mesentery (thin arrow). B) Lymph abutting the pylorus region of the stomach (thick arrow).

Lymph nodes are seen abutting the pylorus region of the stomach with a largest lymph node measuring 17 × 10 mm (Figure 2B) lies adjacent to the external wall of the pylorus of the stomach. There is no convincing trans-mural gastric or distal oesophageal mass.

The biopsies from the necrotic area in the stomach showed necrosis and lymphoid infiltration. Further immunohistochemistry was performed due to history of underlying CLL. The immunohistochemistry showed positive CD20 and CD5 in those lymphocytes while CD3, cyclin D1 and CD23 markers were negative.

These findings were similar to the bone marrow trephine findings and hence, consistent with CLL involvement of the stomach. There was no evidence of blastoid transformation in the biopsies provided. The histology findings were illustrated in Figure 3 A-D. After the endoscopy, she was treated with intravenous infusion of proton pump inhibitors. On discharge, she was referred to haematologist for further treatment. Since then, patient had been reviewed by haematooncologist in London and currently on close monitoring without receiving any active therapy for CLL.

Chronic lymphocytic leukaemia (CLL) is the most commonly diagnosed type of leukaemia in Western Europe and North America and it is more common in elderly population with approximately 70% of patients are over 65 years old [4-6]. The only identifiable risk factor is presence of family history of this disease and for relative of patients with CLL, the risk increases by a factor of 2.5 to 7.5 [7].

CLL presentation is usually asymptomatic at first with only abnormalities can be found in whole blood count with presence of leucocytosis and lymphocytosis [5]. In more advanced stages, lymphadenopathy, hepatomegaly/splenomegaly, recurrent infections, weakness, pallor, hemorrhagic diathesis and general symptoms such as fever, weight loss and night sweats are observed [5]. CLL is characterized by the presence of specific immunophenotype with 95% of patients with leukaemia exhibit the cell surface antigen CD5 in addition to the typical markers of B lymphocytes (CD19, CD20 and CD23) [5,8]. In most cases, the immunophenotyping of peripheral blood lymphocytes by flow cytometry allows the establishment of a diagnosis, and distinguishes CLL from other B-cell lymphomas [5]. The treatment options for patients with CLL include chemotherapy, a combination of chemotherapy and immunotherapy, or drugs that target the signalling pathways that promote the growth and/or survival of CLL cells [9]. In recent years, the treatment of CLL has seen major changes from oral chlorambucil and steroids prior to 1980s, to chemoimmunotherapy (CIT) with purine analogues (most commonly fludarabine, but also pentostatin or cladribine), alkylating agents (including chlorambucil, cyclophosphamide or bendamustine), rituximab (FCR) to the orally administered targeted therapeutic agents inhibiting kinases in the B cell receptor (BCR) signaling pathway such as Ibrutinib (BTK inhibitor) and Idelalisib (p110 PI3Kδ inhibitor) and novel anti-CD20 mAb's (monoclonal antibodies) such as obinutuzumab [9,10]. This progress is continuing and other targeted therapeutics such as Bcl2 antagonists (Venetoclax or ABT-199) and finally chimeric antigen receptor against T cells (CART) are in the process of being developed [10]. Partial remission requires a 50% reduction in tumour bulk (for example, lymphadenopathy and splenomegaly), a 50% reduction in lymphocytosis, and platelet counts of >100,000 cells per μl (or 50% improvement over baseline) or a haemoglobin level of >11 g per dl (or 50% improvement over baseline) without requiring transfusions or exogenous growth factors [9]. Complete remission requires the normalization of blood counts, resolution in lymphadenopathy and splenomegaly, and normal marrow function [9]. Gastrointestinal manifestations have only very rarely been described in patients with CLL [1]. CLL may cause upper GI haemorrhage by directly infiltrating the gastroesophageal junction or through bleeding from oesophageal varices caused by CLL-associated splenomegaly and portal hypertension [11,12]. The diagnostic range for CLL should include CD20+/CD5+ co-expression with CD23+ phenotype, and negative staining pattern for Cyclin D1 to exclude mantle cell lymphoma [lymphomatous polyposis] [1].

CLL is a common haematological malignancy in Europe although involvement of CLL in gastric mucosa is rarely seen. Gastric CLL presenting with significant upper GI bleed is a very rarer presentation.