Copyright: © 2016 Feng J, et al. This is an open-access article distributed under the terms of the Creative Commons Attribution License, which permits unrestricted use, distribution, and reproduction in any medium, provided the original author and source are credited.

Background: Bacterial meningitis is still a common disease in China, and has long hospital stay of about one month and high incidence of fatality and sequelae. We assumed that ketogenic diet (KD) could increase the low glucose in the cerebral spinal fluid, provide energy to brain, shorten the hospital stay and decrease the incidence of its fatality and sequelae, because of its action of anti-microorganisms, inflammation, antiseizure and neuroprotection. Method: Reviewing the patient’s charts. This is a retrospective case study of two consecutive early infant cases with bacterial meningitis. Results: After consulted to an infant who was with meningococcal bacterial meningitis and had left severe occipital encephalomalacia, came the infant girl with bacterial meningitis, because of three days fever and a 30 minutes seizure. Blood culture got pneumonia streptococcus and cerebral spinal fluid (CSF) smear gram stain positive bacteria. The glucose was 0.02 mmol/L and cell count was 326*10^6/L in her CSF, even if the blood glucose was 3.8 mmol/L. She was treated with routine treatment: antibiotics and dexamethasone. On day 2, her frequent focal seizures originated from the left side brain because of the magnetic resonance scan demonstrated subdural emission were deterioratedlasted 11 days, PICU stay 2 days. Informed consent was gotten and medical ethnic permission was approved. On day three of admission KD was initiated by fasting for 29 hours, then her blood betahydroxybutyric acid level reached 2.3 mmol/L, and then with 2:1 Qitong (Zeneca, China) liquid ketogenic diet. 3 days later the ratio of KD increased to 3:1. On day 7, three days after ketosis the glucose in cerebral spinial fluid increased quickly from 0.02 mmol/L to 1.98 mmol/L and white cell counts and protein decreased significantly within one week as well. The blood glucose level was 3.94 ± 0.51 mmol/L (n=30), range 2.8-5.3 mmol/L, median 3.9 mmol/L, 95% CI 3.75-4.13 mmol/L. The blood ketone body (beta-hydroxybutyric acid) level was 1.5 ± 0.82 mmol/L (n=21), range 0.5-3, median 1.2 and 95% CI 1.13-1.88 mmol/L. On day 9 and day 10 of admission the blood betahydroxytutyric acid level was 2.28 ± 0.58 (n=8, range and median, 1.4-3.0,2.4) mmol/L, blood glucose level was 4.13 ± 0.32 (n=8, range and median, 3.7-4.8, 4.10). From day 11, frequent monitoring of blood glucose and ketone body was discontinued. 29 days later she was discharged from hospital. The KD was discontinued after 3 months. The blood sugar and ketone bodies was monitored about every 6 h in hospital, then ketone bodies were monitored two times weekly. After 5.5 months the MRI scan showed mild atrophy of the left brain. Follow-up was performed 1, 3, 6, 12 and 24 months. No symptomatic hypoglycemia and other significant complications happened. No more seizures happened. Her physical and neuropsychological development is similar to that of her same age children at last follow-up. Conclusion: KD might be a safe and effective adjunctive therapy for bacterial meningitis, increasing the glucose in cerebral spinal fluid quickly and inhibiting the inflammation process. It might reduce the complications and sequalae of bacterial meningitis. Further investigations including clinical trial with more cases need to be performed.

The glucose level in cerebrospinal fluid (CSF) of bacterial meningitis is low. The bacterial meningitis is easy to cause the subdural effusion, ependymitis, hydrocephalus and other complications [11]. The glucose transporter 1 deficiency [12] which caused by genetic abnormality the CSF glucose level is low, often cause various types of epileptic seizures and developmental retardation, ketogenic diet therapy is the effective treatment. We assume that based on the existing conventional treatment the ketogenic diet therapy can improve the brain energy metabolism, reduce bacterial meningitis inflammation and shorten the course of the disease, reduce the complications and sequelae.

This is a retrospective study, to compare 2 consecutive cases of infants with bacterial meningitis, about the clinical data, treatment and complications. Patients admitted to the hospital in January 2014 and March respectively. This study was approved by Shenzhen Children's Hospital Medical Ethics Committee. Ketogenic diet therapy for patients was performed with guardian’s written and informed consent. Bacterial meningitis diagnostic criteria [13]: 1, clinical features: fever, convulsions, consciousness change, the fontanelle upheaval and other manifestations of intracranial pressure; 2, tests: Cerebrospinal fluid, blood evidence of a bacterial infection, if the bacteriology examination is negative, CSF white blood cells is needed to be 500 × 10^6/L or more.

Routine treatment: anti-infection, antibiotics began with experience treatment: Coccus infection with penicillin, vancomycin and bacillus infection treated with amoxyllin, ceftriaxone, meropenem, etc. After admission dexamethasone was administered intravenously, 0.15 mg per kilogram of body weight, once every 6 h for 3 days [14], 15 min before or at the same time with antimicrobial drugs. Successively with valproic acid, oxcarbazepine were used as anticonvulsants. Other treatment was symptomatic and supportive.

Procedure initiated with a fasting until reaching the state of ketosis, 2:1 KD was started, then 3:1 instead to 2:1 for a stable ketosis. KD food was Qitong (Zeneca, Shenzhen Biotechnology Company Ltd.), a liquid vegetable protein drinks. Once every six hours monitoring the blood glucose and blood ketone bodies, and ketone bodies was checked when urination. Monitoring at least for one week, after stable blood ketone and blood glucose reached for at least 48 h, the monitoring frequency decreased [15]. The first appointment was one month after discharge, according to the disease state and KD therapy the consequent follow-up interval was 1-3 months. Ketosis monitoring at about 2 times a week, paying attention to patients’ nutrition and ketosis, monitoring the growth and development.

From January to March, 2014 our hospital had 2 consecutive cases of infant bacterial meningitis. The first case was a 55 days old male infant, admitted for 3 days fever and 3 times seizures. He responded well within two weeks and was supposed to discharge in the near future after a brain magnetic resonance imaging test since he otherwise looked normal. It was shocked by finding the unexpected occipital large encephalomalacia. Reviewing the chart the CSF glucose levels were low, but the blood glucose was normal. Given he had convulsions we were wondering whether he also complicated simultaneously with glucose transporter 1 deficiency, ketogenic diet therapy was suggested, hoping to reduce sequela, protect the brain, but the parents refused to the KD therapy and then discharged. After half a month there came the second case, she was a 49 days old female infant of bacterial meningitis. The CSF glucose was only 0.02 mmol/L with clinical suspicion of glucose transporter 1 deficiency. Proposed KD therapy was made on the basis of routine bacterial meningitis treatment. The KD was initiated on day 3 of admission (Table 1). The diagnosis of GLUT 1 deficiency was excluded in both patients. 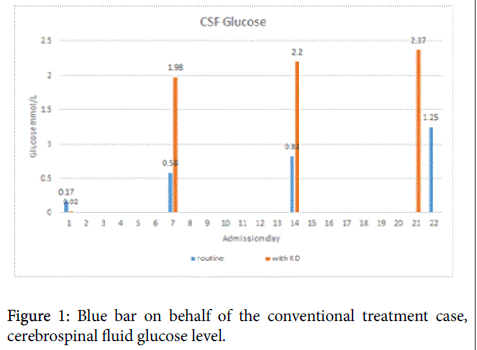 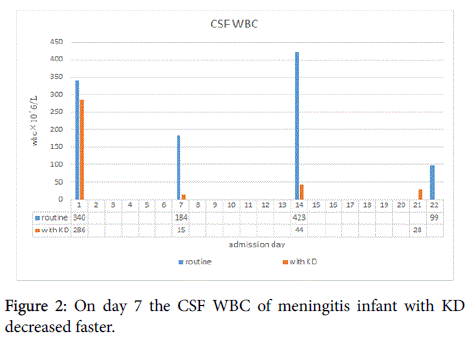 Figure 2: On day 7 the CSF WBC of meningitis infant with KD decreased faster. 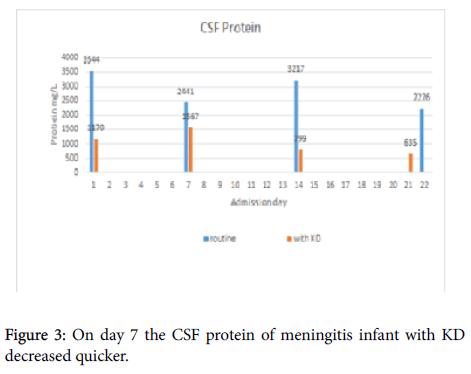 Figure 3: On day 7 the CSF protein of meningitis infant with KD decreased quicker.

Case 1 with meningitis was critically ill at beginning, with and thrombocytopenia, needing breathing machine assisted, after the rescue, he was in a stable condition, ready to discharge from the hospital after an MRI scan. Results showed a big occipital encephalomalacia, with contrast showed the lesion’s edge reinforcement and evidence of bleeding. When consultating author found CSF glucose level was low, the blood sugar was not low, although there are recovery after treatment, but still need exclude glucose transporter 1 deficiency, and advised parents to have ketogenic diet therapy, hoping to increase the level of sugar in the cerebrospinal fluid, or give the brain ketone bodies as an energy, at the same time auxiliary to anti-infection, inhibiting the inflammatory reaction, but the parents refused.

Cases 2, the next consecutive patient was a 49 days old female infant, admitted in hospital for three days fever, one severe convulsions (grand mal like lasted for about 30 min), bacterial meningitis was suspected, given conventional treatment. But fever was high to 39.8 degree’ Fahrenheit and seizures was frequent, she was transformed to PICU. Her blood glucose level was normal, but CSF glucose level very very low, 0.02 mmol/L. She was suggested under the existing guidelines for treatment, at the same time ketogenic diet therapy was added. Magnetic resonance imaging was performed on March 18, 2014. It found some brain damage, including bilateral subdural effusions, more seriously on the left, especially the left subdural effusion complicated with underlying parenchymal damage, meningeal reinforcement, then lead to the left temporal lobe and frontal, parietal lobe (subdural effusion associated with brain atrophy), but much less severe than case 1 (Figures 4 and 5). Figure 4: Sagittal MRI with contrast, on half a month of admission. With routine treatment (left) and with KD adjunct. Figure 5: Sagittal MRI with contrast, on half a month of admission with KD only left mild atrophy, compared to the routine treated case left severe encephalomalacia.

Side effects the ketogenic diet

Our study compared manifestations of two infants cases with bacterial meningitis, indicated under the guidance of present bacterial meningitis treatment, the existing therapy adding on with ketogenic diet therapy, patients’ cerebrospinal fluid glucose rise rapidly, CSF white blood cells and proteins could reduce rapidly, while inflammatory indexes such as peripheral white blood cells, CRP and blood platelet could recovered more quickly than the case without ketogenic therapy. By intensive monitoring even if with a fast bedside way couldn't find hypoglycemia, especially no symptomatic hypoglycemia happened. By 5 months more after the disease onset magnetic resonance imaging scanning found only mild left brain atrophy along the area of the subdural effusion. Within 2 years of follow-up, no longer the seizures recurred. The physical and neuropsychological development level was as the same as those of her age.

Despite childhood bacterial meningitis leading to brain lesions is common, study of the mechanism and treatment is rare. In this study, through a series of magnetic resonance imaging, subdural effusion is demonstrated to occur with severe local cerebromeningeal inflammation, adjacent brain tissue damage such as blood brain barrier damage, brain tissue necrosis, which in turn leads to brain atrophy. Long-term neurologic deficit and epilepsy may occur. Other complications such as ependymitis, hydrocephalus, brain abscess, etc., are linked to inflammation and blood brain barrier damage. In the pathophysiology of bacterial meningitis there exists inflammation, characterized clinically by fever, high white blood cells, C-reactive protein and blood platelet, which is a complicated process. Too severe inflammation is harmful to the body tissue. To study the pathological complications and physiological mechanism is helpful to find new treatment targets. Therefore adrenal glucocorticoids which work on many targets inhibit inflammation and are effective in treatment of bacterial meningitis. Similarly, the ketogenic diet therapy might be effective for bacterial meningitis.

We thank Lei Zhang, Runqi Luo and Kewei Fang for assisting to collect some data and guidance to patients as KD dieticians.