Copyright: © 2016 Nizri E, et al. This is an open-access article distributed under the terms of the Creative Commons Attribution License, which permits unrestricted use, distribution, and reproduction in any medium, provided the original author and source are credited.

Aim: To investigate whether C-reactive protein (CRP) level on admission is associated with percutaneous cholecystostomy (PC) in patients with acute cholecystitis.

Methods: A database of patients admitted due to acute calculous cholecystitis and treated conservatively was assembled. Diagnosis was established clinical presentation and appropriate findings in imaging studies. Patients who underwent PC at admission due to organ failure or patients operated on index admission were excluded. Overall, 161 patients were identified, of whom 106 were treated conservatively and 55 were treated with PC. Data regarding the clinical presentation, comorbidities, physical examination and various laboratory parameters were retrieved from medical files.

Conclusion: Increased CRP level and renal failure are associated with the need for PC. These markers prompt early PC.

Treatment of cholecystitis depends on disease severity and patient comorbidities [2,3]. Mild cholecystitis in a low operative risk patient is treated by laparoscopic early cholecystectomy [4,5]. On the other hand, patients presenting with severe cholecystitis, accompanied by sepsis and organ dysfunction are treated by percutaneous cholecystostomy (PC). Patients with moderate cholecystitis (defined by severe local inflammation), or patients with increased operative risk due to significant comorbidities (even with mild local disease), are treated by I.V antibiotics (further referred as conservative treatment). Moreover, technical and organizational difficulties hamper the implementation of early cholecystectomy even in surgically fit patients [6-9]. Thus, many patients are not operated at the same admission, but are treated conservatively. Failure to respond to conservative treatment, will eventually lead to PC. Currently, it is difficult to determine if a given patient will respond to conservative treatment or whether a PC will be needed to achieve clinical improvement and many patients are referred to PC after failure of conservative treatment [10]. This delay in PC performance entails many medical and economical consequences.

CRP is an acute phase reactant produced by hepatocytes under the regulation of IL-6. CRP levels are up-regulated during various inflammatory conditions and may be affected by a myriad of factors, including liver disease and medications [11]. In a previous study, we showed that increased CRP levels are associated with complicated diverticulitis, and may serve as a marker for the need of abdominal imaging [12]. We also showed that CRP levels retain their predictability even in patients taking aspirin, which is known to downregulate CRP production [13,14]. In the current study, we investigated whether increased CRP levels, as determined at admission, are associated with the need for PC.

Medical data of patients diagnosed with acute cholecystitis in the Tel-Aviv Sourasky Medical Center between January 2007 and March 2014 were retrieved from hospital electronic files. Patients with acalculous cholecystitis or patients who did not have CRP taken at admission were excluded. Patients who were operated on at the index admission were also excluded. Cholecystitis was diagnosed according to the revised Tokyo guidelines [2], i.e., the clinical and laboratory findings needed to be supported by appropriate imaging, either abdominal ultra-sound (AUS) or computerized tomography (CT). Radiological findings compatible with acute cholecystitis were: gallbladder distention, wall thickening, pericholecystic fluid and gallbladder wall enhancement. Laboratory data, as described below, were also collected from patient files. The study was approved by the Institutional Ethics Board of the Tel-Aviv Sourasky Medical Center.

Patients who did not improve upon antibiotic treatment during 48-72 hours, or patients whose clinical situation aggravated (increased abdominal tenderness, appearance of fever, or increased inflammatory markers), were referred to PC. PC was done trans-hepatically and a pig-tail drain was left in the gallbladder for all cases.

Statistical analysis and receiver operator curve (ROC) were done using SPSS for Windows (ver. 17). For comparisons of frequencies between groups, the Chi-square test was performed. For comparisons of CRP and length of hospital stay, the t-test was performed. As CRP failed normality tests, we used the root transformation, which showed normal distribution. However, statistical analyses did not differ, and hence, we present the results of the parametric tests. Multivariate logistic regression analysis was performed using the Cox regression model to analyze predictors of failure of conservative treatment. The odds ratio, as well as its 95% confidence interval, was calculated for each of the independent variables. P < 0.05 was considered statistically significant. The statistical analysis in this work was conducted by the Biostatistic Unit of our institution.

A total of 161 patients were included in this study. Of them, 106 were treated conservatively with I.V. antibiotics, whereas 55 underwent PC. Table 1 compares various clinical parameters between these two groups.

Patients treated with PC were, on the average, older, with higher American Society of Anesthesiologists (ASA) scores, implying increased comorbidities, and with longer hospital stay . 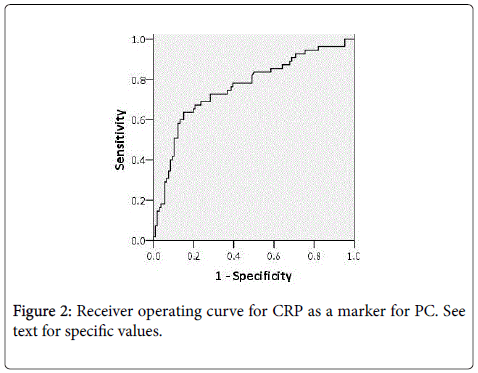 Figure 2: Receiver operating curve for CRP as a marker for PC. See text for specific values.

In this study we demonstrated that increased CRP levels on admission are associated with the need for PC in patients with acute cholecystitis who are not candidates for cholecystectomy. The ability to predict the need for PC on admission can shorten patient suffering, save the time and costs of hospital admissions, and prevent complications resulting from treatment delay.

Similar to findings in other studies, patients who needed PC tended to be older and with higher ASA scores [16,17]. Accordingly, these patients had significantly longer hospital stay. In contrast to other reports [18-20], male sex was not a predictor of cholecystitis severity or of the need for PC in our patient cohort. Time to admission did not differ between groups, implicating that the need for PC is not due to neglected inflammatory process. However, others reported delayed treatment initiation as risk factor to severe cholecystitis [21].

Clinical presentation is also not predictive for the need for PC: although patients who underwent PC had elevated body temperature [17,20], the physical findings of localized RUQ peritonitis or palpable mass did not differ between groups. However, the retrospective design of our study which lacked standardized physical examination, prevent firm conclusions about this issue.

Here we report elevated CRP levels among patients who underwent PC, also among those taking aspirin (about 32% of the cohort). This is important, in light of the down-regulation of CRP production by aspirin previously reported [13]. Our group reported similar findings regarding the presence of complicated diverticulitis in patients taking aspirin [12]. Altogether, we can conclude that although aspirin downregulates CRP production, the pro-inflammatory stimulus exerted by the acute disease overcomes this effect. A CRP level of 47.6 provided the best discriminating value in terms of sensitivity and specificity (73%). The higher the CRP value, the more chance that patient will require PC, with CRP > 120 conferring > 90% for PC. White blood cell count did not differ between those who did and did not undergo PC.

Among other laboratory tests examined in patients referred for PC, bilirubin and albumin also significantly differed between groups. The rise in bilirubin levels was not associated with bile duct obstruction, as implied by the lack of bile duct dilation in imaging, in the majority of cases. Thus, this test seems to act as a marker for the severity of the inflammatory process, and not for a mechanical complication. Along the same line, the decrease in albumin, which was modest in absolute numbers, also represented the severity of inflammation and not malnutrition.

The incidence of both acute and chronic renal failure was increased in the PC group (Tables 3 and 4). This finding may represent the presence of two different patient populations among the PC group. Patients with fulminant local inflammation exert ARF as a systemic manifestation, and can be suspected to have severe cholecystitis. For patients with CRF, the creatinine level measured at admission has no relation to the severity of the inflammatory response, but either to their basic medical condition and comorbidities.

This study has several limitations. First, due to its retrospective design, the criteria for PC referral were not determined prior to treatment decision, and were hence subject to individual clinical judgment. In addition, a significant number of patients were excluded from the study because of the absence of CRP levels on admission.

Our findings, of a higher mean CRP level among patients who needed PC should be interpreted cautiously. The complexity of clinical processes cannot be reduced to a single parameter to refer patients for a specific treatment. Thus, a careful use of any identified biomarker is advised. As observed in this study, a number of physical and laboratory parameters were found to be associated with PC. Hence, CRP levels should be used as an adjunct for clinical judgment and other clinical, imaging and laboratory parameters.

To conclude, we showed that the mean CRP level in patients who underwent PC was higher than among patients who underwent conservative treatment. We suggest that in the appropriate context, CRP can serve, as a biomarker for the need of PC and failure of conservative treatment. This is applicable also to patients taking aspirin. The use of biomarkers for treatment determination immediately at hospital admission merits further research for its presumed benefits for patients and caregivers.