AF Classification and Ablation Strategy: Time for a New Paradigm

Copyright: © 2016 Ziv O. This is an open-access article distributed under the terms of the Creative Commons Attribution License, which permits unrestricted use, distribution, and reproduction in any medium, provided the original author and source are credited.

Catheter ablation for symptomatic atrial fibrillation has emerged as a successful therapy for patients with medically refractive atrial fibrillation. Nearly uniform superior short- and long-term success rates compared with antiarrhythmic medications have prompted recent guideline changes that suggest ablation can be considered before use of pharmacologic therapies [1]. Traditionally, ablation strategies for AF have been divided into either pulmonary vein isolation (PVI) alone or PVI and substrate ablation. The trigger alone strategy has been the primary strategy in patients with paroxysmal atrial fibrillation, with a recent clinical trial reporting greater than a 70% 12 month success rate with the use of contact force sensing technology [2]. Those with persistent and long-standing persistent atrial fibrillation or moderatesevere structural heart disease continue to experience suboptimal results and often require multiple ablations [1]. Many operators believe that in these patients additional ablation beyond PVI is needed. Additional ablation approaches have included such strategies as linear ablation, ablation of complex fractionated electrograms (CFAE), focal impulse or rotor modulation (FIRM), among others. However, recent results of the multi-center STAR-AF 2 trial have shown that linear ablation and ablation of CFAE have not been superior to that of PVI alone in persistent AF [3]. As such, the ideal ablation strategy in these patients uncertain. Furthermore, there appears to be a subset of patients with paroxysmal AF that have poor long term outcomes from PVI alone, as well as a subset of patients with persistent AF patients that have excellent outcomes from PVI alone [4]. Given these data, we believe that classifying AF as either paroxysmal or persistent is inadequate to guide ablation strategy.

More recently, we, as well as other centers, have begun focusing on the presence of atrial fibrosis in the left atrium. Atrial fibrosis and scar have been established as important cellular substrates for AF [5]. Furthermore, atrial fibrosis and scar may serve as sources of micro and macro reentry, anchoring of rotors, and rapid drivers [3]. A recent study showed that atrial scar burden predicts recurrence of AF following catheter ablation [6]. In another recent study by McCann et al. [7], late gadolinium enhancement MRI was performed in 386 patients prior to undergoing their first ablation for AF. In the 123 patients with failed ablations, extent of late gadolinium enhancement correlated more with AF recurrence, rather than the presence of persistent AF. As such, regional fibrosis and scar have been promoted as sources of atrial fibrillation arrhythmia maintenance. Furthermore, a number of groups have demonstrated that the use of electroanatomically guided voltage mapping enables in vivo assessment of fibrosis in the atria of patients with AF [8-10]. Based on these data, we reasoned that incorporating fibrosis and isolating areas of low voltage may be a more efficient ablation strategy than one based solely on either a persistent or paroxysmal AF classification.

In June 2011, we began generating voltage maps of the posterior wall of the LA during sinus rhythm to guide ablation beyond PVI alone in patients classified as persistent AF patients. We used a <0.5 mV threshold for abnormally low voltage and focused on the posterior wall since the posterior wall has been targeted for ablation in other studies and has been reported to commonly harbor regions of low voltage bipolar electro grams [6,11]. This shift was an empiric one and only 3 of our 6 operators made the change in ablation strategy. Therefore, 3 of our operators continued to use a “standard” strategy of PVI with additional lesions based on clinical factors- not voltage data. 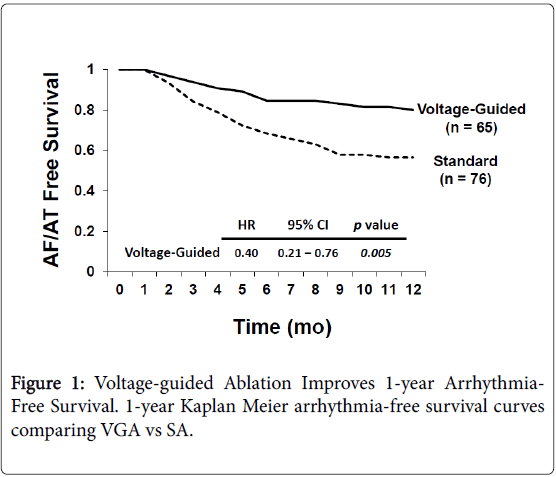 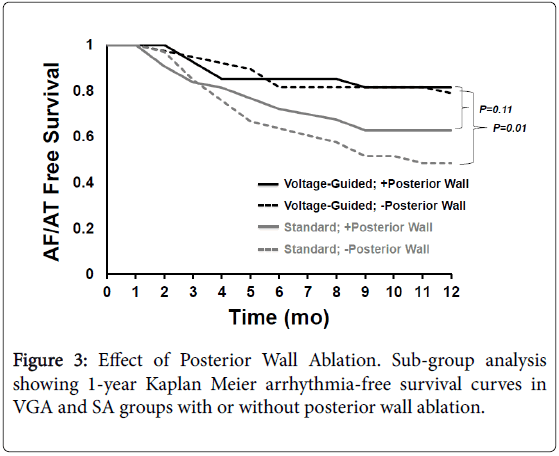 The use of voltage to guide further ablation does not appear limited to persistent AF patients. Kottkamp et. al. (Kottkamp, JCE, 2015) recently published a study where they isolated areas of left atrial fibrosis following voltage mapping of the left atrium in paroxysmal AF in patients undergoing redo ablation, excluding those that had pulmonary vein reconnection. Low voltage was identified and isolated in all 10 paroxysmal AF patients undergoing re-do ablation. During a mean follow-up of 20 months, 9/10 patients remained free of AF. In support of our data, the Kottkamp study also identified areas of low voltage in persistent AF patients undergoing first time ablation. Out of 31 patients, low voltage was identified in 18 patients and isolated in 17, as one patient had fibrosis covering the entire left atrium. In 13 patients, low voltage was not identified and only PVI was performed. Following a mean follow-up of 12.5 months, 22/31 of all patients (71%) and 15/18 patients (83%) in the persistent AF group remained free of atrial arrhythmias following a single procedure.

Both our study and that of Kottkamp et al. [13] suggest that obtaining a voltage map of all patients undergoing AF ablation may identify those that would do well with PVI alone, or those that may need additional ablation, such as isolating areas of low voltage. Importantly, the classification of persistent or paroxysmal AF based on duration of AF episodes does not appear to be a strong predictor of low voltage in the LA. In fact, in our data set of patients with persistent AF, the presence of posterior wall low voltage did not correlate well with duration of AF episodes. While the average longest AF episode was 104 days in patients with low voltage and 81 days with patients without low voltage, this difference was not statistically significant. Furthermore, while LA diameter was significantly larger in patients with low voltage (4.6cm compared to 4.2 cm p=0.04), in a multivariate analysis, only three independent predictors of low voltage emerged: heart failure, diabetes and female gender. Thus, the criteria that we have been using to target ablation beyond PVI do not appear to be valid.

We propose a new classification of AF to better guide ablation strategy: AF in the presence of atrial fibrosis (Fibrotic AF: FAF) and AF in the absence of atrial fibrosis (Non-fibrotic AF: nFAF). This classification allows for a new paradigm in selecting an individually tailored ablation approach that may be unique to each patient based on the presence and extent of atrial fibrosis, rather than simply the duration of AF episodes as with paroxysmal or persistent AF. Despite the promise that voltage mapping appears to hold, significant further investigation is needed. Larger, multicenter randomized trials are needed to corroborate these early data. We need further understanding of potential mechanistic differences in AF with and without fibrosis. The ideal mechanism for identifying fibrosis needs to be assessed (late gadolinium enhancement on MRI versus bipolar voltage mapping). Still, we believe that classifying AF based on presence of fibrosis will have great practical value and will help guide better guide ablation strategy. 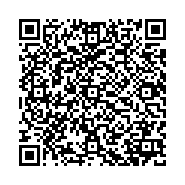