Twenty Black Cumin genotypes were evaluated across locations to assess their agronomic performance, genotype by environment interaction and seed yield stability during 2011 and 2012 at Sinana, Goro and Ginir in randomized complete design with three replications. Except the number of capsules per plant, the analysis of variance indicated that there was highly significant variation (p<0.01) among the genotypes in days to flower, plant height, primary branches, days to maturity, biomass yield and seed yield. The combined analysis of variance indicated that the genotype x environment interaction was highly significant (p<0.01) indicating that there is a need to know which component of the interaction is contributing to the variation. The genotype by environment interaction explained contributed to the majority (79.16%) of the variation while the genotype and environment respectively explained 19.72 and 1.12% of the total sum of squares. The variation is majorly contributed by the genotype x environment interaction than genotype indicating that there was substantial difference in genotypic response across environments. AMMI stability analysis revealed that all the four AMMI components are highly significant. The first and second principal components contributed 70.85% and 17.0% of interaction sum of squares respectively. The PCA1 and PCA2 had sum of squares greater than that of genotypes and cumulatively contributed to 87.86% of the total GEI. Based on the calculated AMMI stability value, BC-DM-9 was the most stable genotypes followed by ACBC- 6 and AC-BC-19. On the other hand, genotype AC-BC-10 was the most unstable followed by MAB-057, ACBC- 8, Local and AC-BC-4. AMMI biplot of seed yield indicated that BC-DM-11 Xereta-1, AC-BC-9 and MAB-018 expressed a highly interactive behavior while genotype 394640-539 showed low interaction and thus stable in its seed yield (kg/ha).

Black Cumin (Nigella sativa L.) is an annual herbaceous plant belonging to the family Ranunculacea [1]. It has been used since antiquity for culinary, seasoning, medicinal and pharmacological purposes [2]. Its seed constituents have unique chemical properties with more than one hundred different chemical components [3]. It is also a valuable source of carbohydrates, proteins, essential fatty acids, vitamins, and minerals. Because of its characteristic properties, there is an increasing demand in the domestic and international markets [1]. Black Cumin is one of the seed spices grown in Ethiopia with a great capacity in income generation at local as well as international market. Owing to this, Black Cumin is included in the crops prioritized in the agricultural strategy and specialization program of Ethiopia with a potential of fulfilling the agriculture-led industry development policy of the country. Even though the crop is with a great potential contribution in the economic development of the country, its productivity and production was too low. One of the reasons that contributed to its low production and productivity is lack of stable improved cultivar with wider adaptability in the past for it has been neglected in the research system of the country. As a result, the country was not getting the benefit that would be incurred from the genetic potential and diversity the crop had. Since 2003, however, the crop was included in the crop improvement research of the country to evaluate the available landraces and generate improved cultivars that are stable and have wide adaptability in their performance.

Several statistical models and procedures have been developed and exploited for studying the GEI effect and stability of genotypes [6,7,10,13]. One of the models is the Additive Main effect and Multiplicative Interaction (AMMI). Additive Main Effect and Multiplicative Interaction (AMMI) is the model of first choice when main effects and interaction are both important to increase accuracy [12]. It is a powerful tool for effective analysis and interpretation of multi-environment data structure in breeding programs and is useful for understanding GEI [4,6]. This method integrates analysis of variance and principal component analysis (PCA) into a united approach [13]. Plant breeders frequently apply AMMI model for explaining GEI and analyzing the performance of genotypes and test environments [14,15].

With the intention to meet the national agricultural development policy and the specialization program, Black Cumin genotypes were under evaluation at multi-location in order to identify stable genotypes with wider adaptability and better agronomic performance. Stability in performance is one of the most desirable properties of a genotype to be released as a variety for wide cultivation [16]. Most of the works so far done on Black Cumin, however, focused on its nutritional as well as medicinal properties. Thus, the information documented on its breeding aspect is scanty. Accordingly, this paper assesses agronomic performance, genotype x environment interaction (GEI) as well as seed yield stability of Black Cumin genotypes under Bale, Southeastern Ethiopia using joint regression analysis and AMMI analysis.

Twenty genotypes of Black Cumin were evaluated across locations in a randomized complete block design with replications at Sinana, Goro and Ginir during 2011 and 2012. Sinana is located at an altitude of 2400 m.a.s.l. Sinana has a range of mean annual rainfall of 563-1018 mm with minimum and maximum temperature of 7.9°C and 24.3°C, respectively. The soil type is dark-brown with slightly acidic reaction [17]. Goro and Ginir are located at altitudinal range of 1557-2032 m.a.s.l. and 1860-2337 m.a.s.l respectively. The genotypes were sown on a plot area of 2.4 m2 having four rows which are 30 cm apart and 2 m long. Three times hoeing, and weeding were applied without any fertilizer and chemical applications (Table 1).

Data collection: The variables were gathered from ive plants selected randomly from the middle rows from each replication at harvest.

Number of capsules per plant: Average number of seed bearing capsules from the five plants.

Days to maturity: Number of days to reach physiological maturity, on plot basis, was recorded when capsules turned brown.

Biomass yield per plant: The average biomass yield in grams, including seeds per plant, from the 5 sample plants.

The combined analysis of variance was performed across test environments of location and years on the average of the variables using SAS version 9.2 [18]. The Additive Main Effects and Multiplicative Interactions (AMMI) statistical model and biplot were produced using Irristat software [19]. Furthermore, AMMI’s stability value (ASV) was calculated in order to rank genotypes in terms of stability using the formula suggested by Purchase [20] as shown below:

The combined analysis of variance for agronomic traits and seed yield of Black Cumin genotypes evaluated across locations were indicated in Table 2. The analysis of variance indicated that there was highly significant variation (P<0.01) among the genotypes evaluated across location with respect to days to flower, plant height (cm), number of primary branches per plant, days to maturity, biomass yield (Kg/ha) and seed yield (kg/ha). On the other hand, non-significant variation was observed among the genotypes with respect to number of capsules per plant. The seed yield ranged from 731.77 kg/ha to 1238.81 kg/ha while the overall mean seed yield recorded was 1057.31 kg/ha. The minimum (731.77 kg/ha) and maximum (1238.81 kg/ha) mean seed was produced by Xereta-1 and BC-DM-11 respectively. The overall mean seed yield produced during the 2011-2012 at Sinana, Ginir and Goro respectively was 1466.37 kg/ha, 924.05 kg/ha and 790.37 kg/ha. Lowest mean seed yield at Goro was recorded due to the shortest rainfall period prevailing at this location as a result of which much of the flowers get aborted and hence resulted in minimum yield. The reverse is true for Sinana, where the rainy season is too long for each flower of the genotypes to set fruit bearing capsules. The minimum and maximum number of days needed to flower was 84 and 93 respectively while the mean number of days to flower was 88. The maximum mean plant height (58.68 cm) was recorded by the genotype AC-BC-9 while genotype MAB-050 was the shortest (41.83) while the overall mean value of plant height was 52.78 cm. The mean primary branch per plant ranged from 3.82 to 5.14 with the overall mean record of 4.37. The mean number of capsules per plant ranged from 10.53 to 14.44 with the overall mean value of 12.81. The overall mean number of days required to reach maturity was 146. It took 142 and 150 days respectively for the early (MAB-018) and late (AC-DM-4) maturing genotypes to mature. The overall mean biomass yield of Black Cumin genotypes was 5199.61 kg/ha. The minimum and maximum biomass recorded was 3046.2 kg/ha and 7197.5 kg/ha respectively (Table 3). Similar result was also reported by Ermias et al. regarding seed yield, plant height, days to flower and days to maturity [21]. Ali et al.[22] also reported similar result on plant height, number of capsule per plant and number of primary branches. 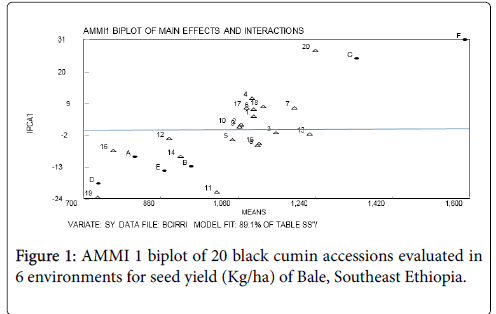 AMMI biplot of seed yield of the 20 accessions tested in six environments during 2011-2012 was indicated in Figure 1. The distance from the origin (0, 0) is indicative of the amount of interaction that was exhibited by genotypes either over environments or environments over genotypes (9). Genotype 20 (BC-DM-11), 19 (Xereta-1), 11(AC-BC-9) and 15(MAB-018) expressed a highly interactive behavior (positively or negatively) while genotype 2 (394640-539) show low interaction and thus stable in its seed yield (kg/ ha) as indicated in the Figures 1 and 2. 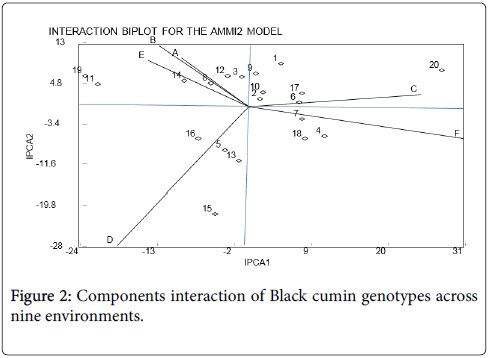 The current study focused only on the agronomic performance evaluation. Thus, it is recommended to consider chemical characterization such as the fatty acids and oil content analysis in the future study. The present study indicated that the genotype showed excellent agronomic performance in the study areas implying that the areas are conducive for black cumin production. As AMMI analysis result revealed BC-DM-9 was the most stable genotypes followed by AC-BC-6 and AC-BC-19 and they can be released and used for production across locations.

Copyright: © 2018 Fufa M. This is an open-access article distributed under the terms of the Creative Commons Attribution License, which permits unrestricted use, distribution, and reproduction in any medium, provided the original author and source are credited.