Copyright: ©2016 Zhang HY, et al. This is an open-access article distributed under the terms of the Creative Commons Attribution License, which permits unrestricted use, distribution, and reproduction in any medium, provided the original author and source are credited.

Parkinson’s disease (PD) is characterized by brain metabolic abnormalities, particularly in subcortical regions. However, previously reported observations of subcortical blood perfusion are inconsistent, especially in the thalamus. This study aimed to investigate the alterations of thalamic regional cerebral blood flow (CBF) in PD by using a recently developed advanced 3D pseudo-continuous pulse arterial spin labeling (ASL) perfusion magnetic resonance imaging approach. Twenty-three PD patients with mild-to-moderate stage disease and 29 normal control subjects underwent ASL MRI. Regional mean CBF values in the thalamus and ventral intermediate thalamic nucleus (Vim) were measured and compared between the groups by one-way analysis of variance. The PD patients showed significantly lower CBF than controls in the bilateral thalamus and Vim. Our findings indicate that hypoperfusion in the thalamus and Vim could be an imaging marker of PD.

T???he thalamus is a critical structure for sensorimotor information integration and is an intermediate node within the well-documented complicated extrapyramidal circuitry that has been seriously implicated in the course of Parkinson’ disease (PD) [1-3]. Treatments such as deep brain stimulation (DBS) targeted to the substructure of the thalamus have been shown to be effective for PD symptoms. Functional imaging of the subcortical nucleus has attracted increasing attention in investigations of the intrinsic alterations in PD patients and magnetic resonance imaging (MRI) and positron emission tomography (PET) are the main approaches.

PET is a traditional method for measurement of cerebral blood flow (CBF) and 18F-fluorodeoxyglucose (FDG) metabolism. CBF and glucose metabolism are tightly coupled in normal and diseased brains [4-6]. Multiple PET studies have reported significant abnormal changes in PD patients in terms of CBF, metabolism and selective neurotransmitters receptor activities. Arterial spin labeling (ASL) MRI is increasingly applied in clinical research. ASL perfusion MRI is able to offer absolute quantification of CBF in units of milliliters of blood per 100 g of tissue per minute, which is comparable with measurements acquired by 15O-PET at both resting and task-activation states [6-9] and a few studies have applied ASL MRI in studies of PD. However, previous studies have reported inconsistent observations regarding alterations of subcortical CBF and metabolism in PD brains; for example, a PD-related covariance pattern (PDRP) has been proposed, which indicates that the PD brain is characterized by increased CBF and FDG hypermetabolism in a set of subcortical regions such as pallidumthalamus and pons, along with decreased CBF and hypometabolism in some frontoparietal regions [5,10-13]. In contrast, some PET studies indicated that subcortical blood flow and glucose metabolism were decreased in the PD brain and assumed that the often-reported PDRP could be caused by an artifact of global mean normalization during data preprocessing [14,15]. Motor improvement in PD patients treated with apomorphine or DBS was suggested to be associated with increases in CBF in a series of subcortical as well as cortical regions [16,17]. Another three investigations using ASL MRI did not reveal any differences in subcortical CBF between PD patients and controls, except in some cortex areas [18-20]. The studies described above demonstrate that the underlying metabolic alterations in subcortical regions are elusive in the PD brain. In the present study, we aimed to establish the regional thalamic CBF using an alternative recently developed 3D pseudocontinuous pulse ASL (pCASL) MRI approach.

Most previous ASL-based research employed either conventional two-dimensional multi-slice or three-dimensional gradient echobased techniques and suffered from motion and susceptibility artifacts. Recently, a new pCASL method with three-dimensional fast spin echo (3D-FSE) with spiral readout was introduced and has drawn increasing attention, because it offers a greatly increased signal-to-noise ratio and reductions in motion artifacts and distortion in regions of high magnetic susceptibility. Due to the advances in ASL techniques, 3D pCASL is increasingly applied in clinical neuroimaging protocols and research [21].

We recruited PD patients for this prospective study between October 2014 and May 2016 from the Department of Neurology of our hospital. Participants included PD patients with mild-to-moderate stage disease without dementia and healthy age-matched normal controls. Participants were examined by structural MRI and 3D-FSE pCASL MRI. All PD patients were diagnosed by neurologists and fulfilled the United Kingdom Parkinson’s Disease Society Brain Bank criteria. Hoehn and Yahr (HY) scores for the patients ranged from 1 to 3. Motor symptoms were evaluated with the Unified Parkinson Disease Rating Scale part III (UPDRS-III). Six PD patients had never received any anti-PD medication therapy and the others had been off medication for at least 24 h before MRI. The demographic and clinical details for the study groups are listed in Table 1. This study was approved by the Ethics Review Board of our hospital and informed consent was obtained from all study participants. ASL data post-processing was performed on the GE AW4.6 workstation. The 3D ASL software toolkit was used to generate raw CBF maps. Absolute thalamic regional CBF (rCBF) was measured by drawing a region of interest (ROI) on the slice with the largest area of the thalamus for each participant by referring to the high-resolution 3D T1 MRI. The borders of the left and right thalamus were defined through manual drawing. All ROIs were drawn blinded to the patient or control status.

During our pre-experiment, we observed that the CBF maps of the thalamus were not homogeneous and the ventral intermediate thalamic nucleus (Vim) presented the highest perfusion among the whole thalamus area, The Vim could be easily positioned and thus, we also drew ROIs on the bilateral Vim to detect CBF in these regions. Figure 1 illustrates the positions of ROIs in a representative case.

Statistical analyses of differences in demographic data and rCBF between the groups were conducted by one-way analysis of variance using SPSS software, version 15.0. 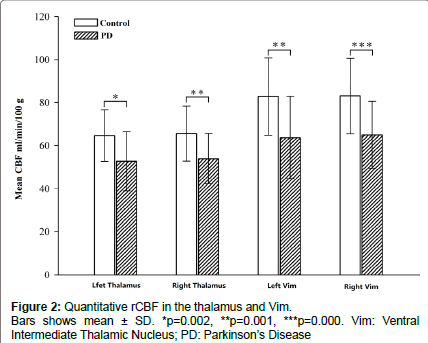 In this prospective study, we aimed to illuminate the changes in regional blood flow in the thalamus of PD patients using a new 3D-FSE pCASL perfusion MRI method. Our findings showed significantly lower regional CBF in the bilateral thalamus in PD patients when compared with the control group, in particular, in the thalamic substructure of the Vim.

The thalamus is the core brain region that integrates sensorimotor information and plays a relaying role within the cortical-basal gangliathalamo- cortical extrapyramidal circuitry. Decreased thalamic neuronal electrophysiology activity in both Parkinsonian animal models and human patients has been demonstrated in previous studies and is considered as an important factor underlying the movement deficits of PD [3,22-24]. Through noninvasive blood flow measurement, our findings confirmed a decreased level of blood perfusion in the thalamus as well as in a substructure, the Vim, in PD patients and these findings are consistent with those of previous studies. We speculate that the possible of mechanism for the subcortical hypoperfusion is related to the defects in neurotransmitters and consequent impairment of neurogenic vasoregulation. Loss of dopaminergic neurons is the most prominent pathological feature in PD and stimulation of the dopaminergic system was shown to induce widespread increases in CBF in both animal models and humans [14,25].

Our findings indicate that the pattern of CBF in the thalamus is heterogeneous and the Vim presents the highest activity within the thalamus. This imaging feature may be attributed to the intensive modulation function of sensorimotor activity in the Vim. PET and SPECT studies indicated that Levodopa and DBS in PD patients could induce improvement of the CBF deficit in the Vim [17,26]. However, some previous studies using ASL did not reveal reduced rCBF in the thalamus [10,11,18-20], which is inconsistent with our findings. This discrepancy could be ascribed to differences in the methodology employed. A statistical parametric map with whole brain CBF normalization was applied in previous studies. However, different brain areas, such as the posterior and anterior circulating, cortical and subcortical regions, actually possess very different rCBF values and whole brain CBF normalization liked introduced bias. In our method, careful ROIs were carefully drawn for acquisition of absolute rCBF data. Our results suggest that thalamic hypoperfusion could be a characteristic of the PD brain.

There are some methodological limitations in our study. First, we focused on the thalamus as the ROI, rather than whole brain regions, based on the consideration that principal pathological features of PD can be attributed to disorders of subcortical neurotransmitters. Second, we only acquired CBF data to quantify blood perfusion due to the restrictions of the imaging technique. Other ASL parameters such as the arterial transmission time and blood flow volume could provide further insight into the mechanisms underlying the pathology of PD [18]. Additional perfusion parameters should be taken into account in future investigations.

In summary, compared with healthy controls, PD patients showed significantly lower rCBF in the thalamus as well as in its substructure, the Vim. Based on the excellent ability to measure CBF deep in the brain, 3D ASL pseudo-continuous pulse perfusion MRI is a suitable approach for detecting biomarkers of PD and could be used for treatment and disease monitoring in the future.