Copyright: © 2015 Ku YN, et al. This is an open-access article distributed under the terms of the Creative Commons Attribution License, which permits unrestricted use, distribution, and reproduction in any medium, provided the original author and source are credited.

Patients: Children with caustic esophageal burn admitted to Chang Gung Children’s Hospital during 1993 to 2013 were enrolled and medically reviewed.

Measurements and Main Results: A score system based on clinical and metabolic condition with total 5 items and the highest score of 6 was designed and applied to predict esophageal stricture and medical assessment after corrosive injury. Using SAS system software version 8 for Windows, continuous and dichotomous variables were analyzed.

Previous reports documented hypermetabolic states as fever, hyperglycemia, granulocyte activation was not uncommonly found in acute burn injury and associated with their outcome [7,8,9-11,12]. Patients with corrosive esophageal burns sometimes exhibit symptoms such as hyperthermia, elevated blood sugar and leukocytosis and the relation of these hypermetabolic status with prognosis after corrosive burn injury are rarely discussed. Furthermore, corticosteroid therapy, with controversial prevention efficacy of further stricture which is commonly applied in high degree esophageal burn, is associated with hypermetabolic status and the effect is undetermined.

Our study aimed to explore prognostic factors using a severity score system including metabolic condition related to subsequent stricture formation after esophageal caustic burn and assess the benefits or deficits of steroid use for these patients.

We retrospectively investigated the children admitted to Chang Gung Children’s Hospital for corrosive ingestion between July 1993 and June 2013. The study was approved by Institutional Review Board (IRB No. 104-6861B) of Chang Gung Memorial Hospital. Patients’ demographic information, nature of the caustic agent, medical records with timing of medical access, vital signs, clinical manifestations, diagnostic procedures with endoscopic findings, medical management, subsequent complications, and following final outcome were reviewed. Laboratory studies were evaluated, including the peripheral leukocyte count and blood electrolytes, liver and renal functions, and sugar level at admission. Delayed management was defined as initial treatment more than 6 h after caustic ingestion. The severity of esophageal injury on upper gastrointestinal endoscopy was classified as follows: grade 0, negative findings; grade 1, injury limited to erythema and edema; grade 2, ulceration with necrotic tissue and white plaque; and grade 3, injury involving deep ulcerations, white plaque, and necrotic changes [13]. In our patients, low-grade injury was defined as grades 0 and 1, and high-grade injury was defined as grades 2 and 3. Hyperthermia was defined as an axillary temperature >38°C. Hypotension was defined a systolic blood pressure below the age-specific values in the pediatric advanced life support guidelines. Hyperglycemia was defined as a blood sugar level >120 mg/dl. Marked leukocytosis was considered to be a blood leukocyte count >1.5 × 109/L. Esophageal stricture was defined as the presence of narrowing of a segment of the esophagus seen on swallowing contrast material or stenosis viewed on endoscopy after the event [14]. We designed a score system with total 5 items and the highest score of 6 based on clinical information from the hospitalized patients (Table 1) in order to predict the possibility of esophageal stricture after corrosive injury. The score system is a 0-6 point numerical score, including 5 items of the patient’s age, leukocyte count, evidence of hypermetabolism, such as hyperthermia and hyperglycemia, and the severity degree of esophageal injury on upper gastrointestinal endoscopy. Continuous variables were analyzed by the Student’s t test and dichotomous variables by the ?2 test. A P value of < .05 was considered statistically significant. All the tests were analyzed using SAS system software version 8 for Windows. The score system was analyzed by the sensitivity and specificity test.

Table 1: Score System for The Possibility of Esophageal Stricture After Corrosive Injury. NOTE. N/A: Not assessed.

Upper gastrointestinal endoscopy was performed in every patient within 48 h after the event. Antibiotics and corticosteroids were used in 34 (59.6%) and 30 (52.6%) patients, respectively, based on the decision of the treating physician. Thirty-six patients were treated with nasogastric tube irrigation, and 12 of them developed esophageal stricture. Ten of the 30 patients treated with antibiotics and 11 of the 34 patients given steroids finally developed esophageal stricture. The average hospital stay was 7.2 days. One 2-year-old female with esophageal stricture ultimately died of adhesion ileus and sepsis after 91 days.

High-grade esophageal burn was diagnosed in 36 patients (63%). Fourteen (24.6%) of the 57 patients subsequently developed esophageal stricture within 2 months (Table 3). All patients who developed an esophageal stricture had ingested an alkali except one acid material ingestion. Statistical analysis showed significant risk factors for stricture were hyperthermia (P= 0.011), hyperglycemia (P=0.001), and high grade burn injury (P=0.001). Patients with esophageal stricture included 8 males and 6 females, with the youngest 1 year 4 months of age and the oldest 12 years of age and among them, 9 (64.3%) aged 5 years or younger. The stricture formation time from injury ranged from 21 days to 49 days with mean duration of 33 days. Seven (50%) had multiple sites stricture formation in the sequential follow up. Six of them accepted balloon dilatation less than 3 times and 8 (57.1%) underwent serial balloon dilatations (3 times or more).

Two patients finally accepted gastrostomy owing to inadequate efficacy for nutrition supplement under dilatation and another one operated for esophageal reconstruction due to multiple stricture sites with one esophageal perforation as complication of dilatation. Only 2 patients accepted short duration (less than 1 month) parenteral nutrition in the acute phase of injury. Sequentially, four patients (28.6%) had growth retardation and failure to thrive due to undernutrition finally with 3 of them retarded both body weight and height. None of these patients had gross developmental delay. 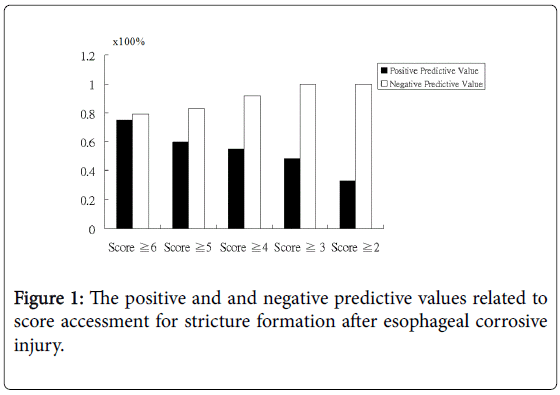 Figure 1: The positive and and negative predictive values related to score accessment for stricture formation after esophageal corrosive injury.

After ingesting a corrosive agent, the tissue inflammation and degeneration that occur during the first 24–48 hours are aggravated by bacterial invasion, and fibroblast proliferation within the wound is followed by collagen deposition during the first week followed by a prolonged phase of abnormal collagen deposition with hypertrophic scar formation occurs [15,16]. Multiple factors are involved in the process leading from the initial esophageal damage to esophageal stricture formation. Several parameters were used to monitor the severity of inflammation or evidence of infection in these patients, and different parameters or medical management produced varied outcomes. A study of caustic ingestion in 378 children demonstrated that gastrointestinal signs or symptoms were not reliable for predicting the presence and severity of esophageal lesions or the development of esophageal stricture [17]. The leukocyte count and C-reactive protein level are useful parameters for monitoring inflammation while it were of limited value in another reports [18,19]. Similar to previous reports, our study showed that a higher degree of esophageal damage as a risk factor of esophageal stricture [18,20].

Hyperglycemia and hyperthermia are two prominent phenomena of the hypermetabolic stress response in burn patients [21,22]. Hyperglycemia may affect innate immunity, which leads to infection and delayed healing [11,23]. In burn patients, hyperthermia increases energy expenditure and causes muscle protein catabolism and loss and the systemic activation of leukocytes is usually observed [8]. Although the appropriate activation of leukocytes and endothelial cells can act beneficially to confer host resistance and initiate wound healing, the over-activation of leukocytes can result in a hugely amplified inflammation process [24]. Hyperglycemia and hyperthermia, and high degree of burn injury were risk factors for esophageal stricture formation in our study showing more than 90% patients with stricture formation having at least one of these hypermetabolic signs with the most prevalent of marked leukocytosis, followed by hyperthermia. According to our score assessment, 75% patients scored 6, 55% scored 4 or more, and 33% scored 2 or more had stricture formation and this provides a reasonable cut value of score 6 as severe, 4 as moderate, and 2 as mild severity for esophageal burn. Hypermetabolic status is not uncommonly occurred in caustic burn patients and as it become more prevalent, more stricture would be developed. Hyperglycemia, hyperthermia, and the inappropriate activation of leukocytes may lead to severe tissue inflammation, infection, muscle loss, and delayed wound healing, all of which contribute to the development of esophageal stricture.

Prophylactic antibiotics and empiric steroids are intended to suppress local bacterial invasion and inflammation in the process of corrosive substance ingestion, in order to prevent esophageal stricture formation. Antibiotics seem to be effective at reducing the incidence of stricture formation [25], but the use of steroids is controversial [20]. In our study, neither of them was helpful in preventing esophageal stricture. Nevertheless, the use of corticosteroid will enhance catabolism, possibly precipitating hypermetabolism, as risk factors for subsequent stricture formation in our study, warrents cautious application.

The research was supported by grant from Chang Gung Memorial Hospital CMRPG4C0043.