The design and construction of buildings in hot-humid climates requires high energy consumption typically for air conditioning due to higher thermal loads. In hot-humid climates, there is a rising concern on the current rate of energy consumption due to air conditioning. Considering the wider impacts of carbon emissions on our climate, and the need to reduce these emissions, effective energy efficiency solutions are necessary to achieve the overall goal of reducing carbon emissions. Conventional energy resources continue depleting and the energy demands of a growing global population continue to increase. Ventilation rates to buildings must be increased to ensure occupants healthy indoors environment. This more outdoors air gave the designers a much bigger load to be removed especially in humid climates. Outdoor cooling remains a challenge but will have lots of social and economic benefits.

This paper presents the design and performance of a fully integrated liquid desiccant air conditioning system that could be used for indoor and outdoor cooling. The superefficient packed liquid desiccant evaporative air conditioning system can provide 22000 m3/h treated fresh air at supply temperature of 16°C with 50% reduction in energy consumption compared to conventional systems.

With the substantial increase of global resources being diverted towards the search for the renewable and sustainable energy solutions in recent decades, each industry sector has been exploring various avenues for economically viable innovations for the reduction of energy consumption and carbon emissions. One of the major avenues of research is search for long term and economically viable replacements for the utilisation of fossil fuels.

In Doha-Qatar, the average highest outdoor temperatures during a year is 37.0°C however, high-temperature values that exceed 46°C could be observed in summer. The temperature exceeds the 40°C for more than 300 hours, which anticipated to be doubled when considering Doha climate change [1].

In development countries, there are challenges related to intensifying energy consumption majorly by the air conditioners installed in the buildings. Therefore, energy efficiency initiatives have been taken by the government to establish strict standards and regulations. Air conditioning counts for more than 60% of the electricity consumption in Gulf countries [2]. Moreover, this lack of responsiveness to the local climatic conditions also leads to problems of indoor air quality, user comfort and user productivity.

In addition, higher ventilation rates are dictated both by better comfort requirements and by the most recent standards such as ASHRAE (62-2016). More outdoor air for indoor air quality gave the designers a much bigger load to be removed from the air especially in humid climates. The outdoor air must be conditioned to the desired comfort level of humidity and temperature before being supplied to the occupied spaces.

On the other hand, cooling open spaces, particularly with the use of smart Air-Conditioning (AC) systems, will help in enticing more tourists to visit the region in summer. Despite searing temperatures and high humidity, people will find it interesting to go to places such as souqs, cultural venues, and other tourist destinations if given a cool and suitable ambiance. Evaporative cooling often used for outdoors but it will not be enough to relief people’s discomfort with the weather during the hot months.

Cooling is usually obtained with refrigeration machinery and often some post heating is required to heat the air before it is supplied to the rooms. Conventional air conditioning systems (for example vapour compression systems) address these issues by cooling air below its dew point such that water vapour condenses on a cooling coil, thus removing moisture from the air. The dehumidified air is then reheated to the desired temperature [3]. This process of deep cooling to dew point and reheating consequently leads to higher energy requirement.

The other possibility is the chemical dehumidification by using desiccants. Solid or liquid desiccants are able to reduce the water vapor content in moist air. Chemical dehumidification had until now few applications. The most widespread systems are desiccant wheels, which used mainly solid sorption, and packed towers which used liquid desiccants. In hot climates, it is desirable to reduce the ambient air temperature to improve comfort levels; however, in hot and humid climates (as in some Gulf countries), removal of moisture from the air (dehumidification) is almost as important as cooling [4]. The amount of dehumidification depends on the concentration, temperature, and characteristics of the hygroscopic solution because of the vaporpressure difference between the air and the liquid desiccant. Several liquid desiccants, including aqueous solutions of organic compound and aqueous solutions of inorganic salts, have been employed to remove water vapor from air. Desiccant materials play a crucial role in the development of desiccant air conditioning. The characteristics of the desiccant material being utilised impact the performance of the desiccant air conditioning systems significantly [5]. The equipment used for the different components of a desiccant system are air-contacting equipment for liquid air interactions designed for enhanced heat and mass transfer for handling the low liquid flow and large process air flow rates, with minimal air pressure drop, while providing the desired large contact surface area [6,7].

Desiccants are natural or synthetic substances, having a high affinity for water, capable of absorbing water vapour from their immediate vicinity. They are available in both liquid and solid states. Solid desiccants are compact and less corrosive. On the other hand, liquid desiccant offers several benefits, including, lower regeneration temperature, lower pressure drop of air across the desiccant material, suitability for dust removal by filtration, and flexibility in utilisation especially when handling large volumes of air [8]. Studies have reported that desiccant systems can reduce energy consumption by as much as 40% [9]. In desiccant cooling cycles, the desiccant (brought into contact with air) reduces the humidity of the air by absorbing moisture from the air. Then the air temperature is reduced by conventional cooling coils or other components such as evaporative coolers.

However, the moisture impregnated desiccants need to be dried in a regenerator, in which the water vapour previously absorbed evaporated out from it by heating. The heat required to regenerate the desiccant can be supplied from low-temperature sources such as waste heat or solar energy [6,7,10]. Utilising solar energy for this application is particularly interesting because the greatest demand for cooling occurs during times of highest solar insolation. There are different means by which the solar thermal energy can be harnessed for this purpose; examples include conventional solar thermal collectors, solar ponds, and salt works. Besides collecting solar thermal energy, solar ponds have the inherent ability of also storing the thermal energy, and have been widely studied as such.

Many researchers worked on packed absorbers and compared the results with theoretical models. Factor and Grossman [11] developed a theoretical model to predict the performance of a packed liquid dehumidifier. Initial results with Mono Ethylene Glycol (MEG) were unsatisfactory. But LiBr experiments showed good agreement with the theoretical model. They noted that MEG is not the best choice of organic desiccant and TEG would have been a preferable choice.

Chen et al. [12] and Patnaik et al. [13] reported results of the experiments on packed bed dehumidifiers using salt solutions as desiccant. Chung et al. [14] reported some experimental findings and developed correlations for heat and mass transfer coefficient using structured packing and TEG. Lazzarin et al. [15] developed a computer model of a packed tower and carried out paramatic studies using LiBr and CaCl2 to obtain the optimum operative conditions. The experimental results matched closely with values predicted by the computer model. Oberg and Goswami [16] developed a model for simultaneous heat and mass transfer between air and TEG desiccant in a packed bed absorption tower. A comparison between the experimental and the theoretical results showed that the model gave good predictions of the heat and mass transfer between desiccant and air. Zuraigat et al. [17] investigated the performance of an air dehumidifier using TEG under hot and humid conditions using two different structured packings, wood and aluminium. The performance of the dehumidifier was evaluated and expressed in terms of moisture removal rate and the dehumidifier effectiveness. Elsarrag et al. [18] reported some experimental findings and developed correlations for mass transfer coefficient of a structured packed column using TEG as the desiccant Elsarrag et al. [19] developed design guidelines for liquid desiccant air dehumidification using TEG and assessed the performance of the desiccant evaporative air conditioning in the comfort zone. The experimental results were compared well with the theoretical model.

Several liquid desiccants, including aqueous solutions of organic compound (e.g. triethylene glycol) and aqueous solutions of inorganic salts (e.g. lithium chloride), have been employed to remove water vapor from air. The process equipment utilized for liquid-gas contacting is generally falling film, spray or packed towers. Several researchers addressed the possibility of using desiccant dehumidification and solar energy [1,20,21] in conjuction with evaporative cooling systems to be more adaptive with the humid. Their target is to lower the average daily maximum greenhouse temperatures by about 4-6°C compared with the normal evaporative system. Figure 1 below summarises the difference between the magnesium based desiccant with conventional desiccants interms of toxicity, availability, cost and equilibrium humidity. 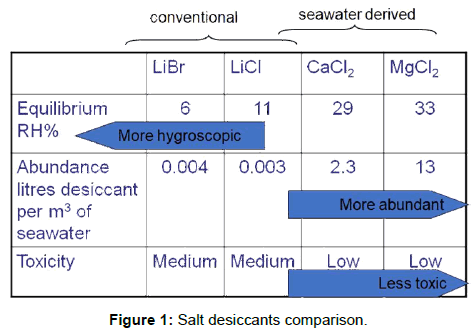 The rejected brine from the electricty water authority in Qatar is analysed and enhanced by MgCl2 to provide the sufficient concentration to lower the air wet bulb temperature to the desirables levels. Figure 2 shows the relation between the equilibrium humidity and the minimum wet bulb can be obtained assuming the effectiveness is 100% and the air temperature is equal to the solution temperature. This paper reveals and discusses the integration of the superefficient A/C system that has been regionally designed, manufactured and tested to reduce the need of vapor compression cycles. Direct evaporative cooling is also integrated with the system to cool or humidify the air when required. The system has an intelligent control panel. Besides temperature and humidity, the smart control regulates flows, concentration and system capacity. As shown in Figure 4, the use of conventional air conditioning to cool the ambient air to 16°C requires a peak cooling capacity of 520kW. The use of coupled indirect-direct evaporative cooling with the direct expansion (DX) system reduces the refrigeration peak cooling capacity to 403kW. The desiccant stage will reduce further the peak load to 252kW which is almost 50% of the nominal capacity. Typically, the electrical load reduces due to the use of indirect-direct evaporative cooling (197kW to 144kW). As shown in Figure 5, the desiccant evaporative system will reduce the peak electrical load to 92kW.

The monthly and annual electrical loads are shown in Figures 6 and 7. The use of indirect-direct evaporative cooling will reduce the electrical load by 28% and the desiccant system by 57%. 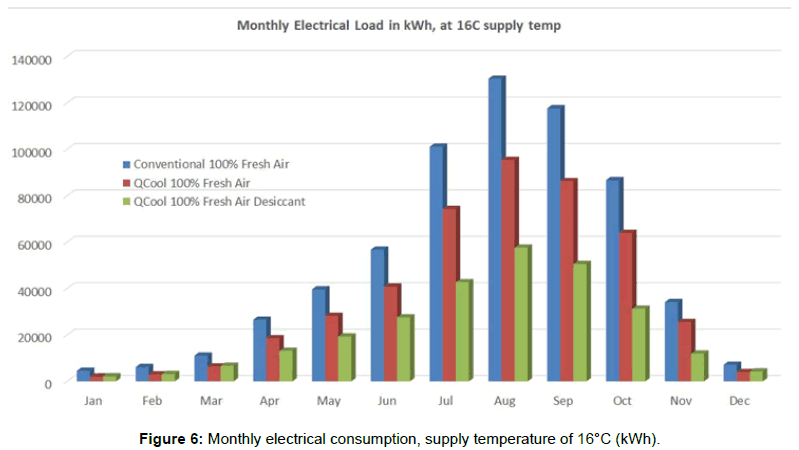 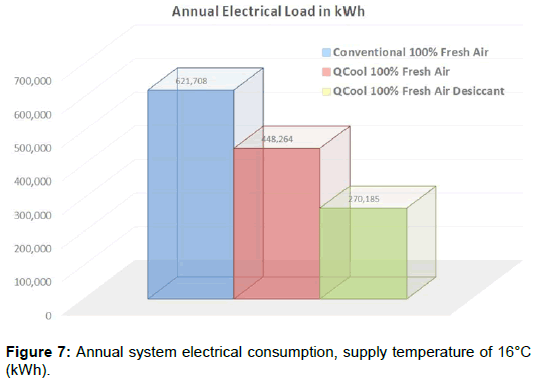 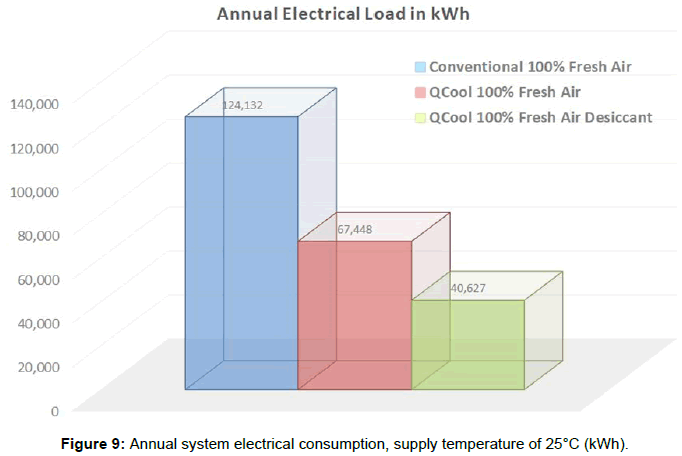 This paper presents a clean, smart and environmentally friendly cooling technology, QCOOL. Qatar depends on desalination as water source. QCOOL utilises the rejected brine as a desiccant to dehumidify the air and condensate water along with treated grey or potable water to cool the air. In hot-humid climates the temperature can exceed 46°C and the wet bulb temperature exceeds the 30°C. Therefore, the smart air conditioning system will reduce significantly the cooling electrical demands.

The current system demonstrates that the dependency on conventional air condition systems can be reduced by using integrated and innovative technologies. Here, the peak and annual cooling loads are reduced by 30% of using one stage (indirect-direct evaporative cooling) and by 50% when using the desiccant system.

Design spaces with higher supply temperature (e.g. open spaces, workshops, fresh air applications etc.) will result in more flat profile in summer. In such case, there is a potential to drive the system fully by renewables.

Copyright: © 2018 Elsarrag E. This is an open-access article distributed under the terms of the Creative Commons Attribution License, which permits unrestricted use, distribution, and reproduction in any medium, provided the original author and source are credited.