7Department of Medicine, University of Taief, Kingdom of Saudi Arabia

Copyright: © 2017 Junainah E, et al. This is an open-access article distributed under the terms of the Creative Commons Attribution License, which permits unrestricted use, distribution, and reproduction in any medium, provided the original author and source are credited.

Background: Intracystic (encysted) papillary carcinoma (IPC) is a rare distinct entity of breast cancer, usually asymptomatic, sometimes presented as breast mass or nipple discharge. It shows benign appearance on imaging. Ultrasonography shows pure cyst or mixed image, sometime solid mass. Pathologically can be divided into pure form, or associated with ductal carcinoma in situ (DCIS) or invasive carcinoma. It is considered as noninvasive or minimally invasive, because there is no infiltrating growth pattern and metastases are rare. Traditionally considered to lack a myoepithelial layer, it has favorable prognosis even with invasion. Stromal invasion found in 92%. In case of high grade variant which diagnosed by high nuclear grade and high mitotic activity, usually triple negative and p53+ as we have in our case?

Encapsulated papillary carcinoma (EPC) of the breast, it is considered as variant of ductal carcinoma in situ (DCIS) based on its indolent behavior. It accounts for approximately 0.5% to 2% of all breast cancers and typically occurs in postmenopausal women, but can occur in younger age group aging from 25-80 [1-3]. Histologically EPC is characterized by papillary configuration within a well-circumscribed cystic or distended duct with cytological features similar to papillary DCIS. These lesions lack myoepithelial cells at their periphery, in contact to DCIS which exhibits myoepithelial cell at the periphery; recently many authors have considered EPCs as, invasive carcinomas with an expansile growth [4-7].

The most extensively studied proteins that constitute the basal lamina component of the basement membrane are type IV collagen and laminin [8]. Those have been studied by Immunohistochemical targeting these proteins which demonstrated linear and continuous basement membranes in benign and in situ lesions and discontinuous or absent expression in invasive carcinoma [1-9].

High grade variant of this tumor is characterized histologically by high nuclear grade as well as high index of mitotic Figure and of larger size, furthermore has associated with invasive component, of usually NOS type but can be of papillary or any other subtypes [10-13]. Imunohistochemical study, shows lack of expression of ER, PR and Her-2 (triple negative group) has been detected in this remarkable case report. 12 cases have been reviewed by Dr Rakha in 2015. They reach to conclusion that it behaves in similar fashion to conventional form of invasive breast carcinomas [14].

A 42-year-old woman presented with left side painful breast mass since one month, she has positive first degree relative with history of breast and endometrial carcinoma. On examination show left side large define cystic mass measures 6.5 cm, aspiration of the mass done and was reported as positive for malignant cells, the mass recurred after aspiration within 4 weeks, no palpable lymph node seen, wide local excision of the mass done with sentinel lymph node, the pathology report show cystic papillary carcinoma, high grade with invasive area of NOS grade III sentinel lymph node was negative. 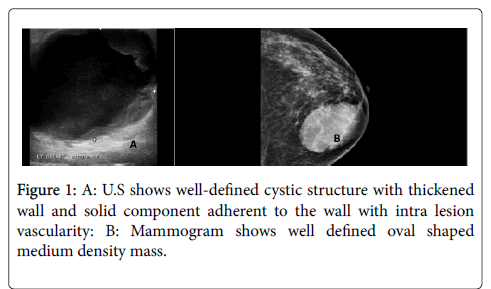 Final histopathological diagnosis given was intracystic papillary carcinoma, high grade with invasive component. Immunohistochemistry (IHC) study show complete negativity for all myoepithelial markers in both the encysted and the invasive component which is usually the case with such type of cases. The hormonal receptor revealed tumor cells were negative for estrogen (ER), Progesterone (PR), Her2/neu suggestive of high-grade to moor (Figure 3). Patient was referred for adjuvant treatment and was free from disease after (Hematoxylin and Eosin, X 100) (Figure 2) showing tumor with abortive papilla, admix with solid and trabecular areas. The tumor cells exhibit hyper chromatic pleomorphic nuclei with prominent nucleoli and eosinophilic cytoplasm. Mitotic count was 9-10/HPF, focal areas of necrosis and hemorrhage is noticed. B: (Haematoxylin B and Eosin 100X) showed invasive component with morphology of infiltrating ductal carcinoma NOS type. The papillary carcinoma of the breast is characterized by a papillary growth pattern with thin fibro vascular stalk lined by neoplastic epithelial cells. Malignant papillary neoplasms of the breast consist of a wide spectrum of lesions that include ductal carcinoma in situ arising in intra ductal papilloma, papillary DCIS, encapsulated papillary carcinoma, solid papillary carcinoma and invasive papillary carcinoma. Lack of myoepithelial cell layer within papillae differentiates benign papillary neoplasm from malignant papillary neoplasm [4]. Intra cystic papillary carcinoma is a solitary, centrally located malignant papillary proliferation within an encysted or cystically dilated duct. IPC was considered to be a variant subtype of DCIS but a recent review of literature shows its association with DCIS or invasive breast cancer in about 40% cases [5]. In IPC (pure) form, solid papillary tumor is confined within a cystic dilated duct without DCIS or invasion into the surrounding tissue. A minority of IPC may be associated with invasive component without features of papillary tumor but rather show morphological features of invasive ductal carcinoma, not otherwise specified type [4]. Similar morphological features were noted in our case. Detection of associated pathology (DCIS or invasive form) is the mainstay as prognosis? and treatment modalities depend upon these associated lesions [6]. Usually intra cystic papillary breast cancers reveal low or intermediate nuclear grade without necrosis. They show strong immunopositivity for estrogen and progesterone receptor and negativity for Her2 net [7]. IPC associated with invasive carcinoma are of high nuclear grade and necrosis. In our case IHC study showed ER, PR, SMA, Her2 net negativity with high proliferation index. Histopathological findings revealed high nuclear grade and necrosis.

Papillary carcinoma of breast generally occurs in elderly postmenopausal women aged 63-67 years. Clinically, patient presents with palpable mass or bloody nipple discharge. It may also manifest as asymptomatic lesion identified at screening mammography. Radiological findings may show on mammography as an oval lobulated, circumscribed lesion and on USG as a complex cystic mass with solid component but differentiation between invasive and papillary DCIS is difficult and requires histopathological confirmation [8].

Cytological diagnosis may be inconclusive as aspirate from cystic component yield hemorrhagic fluid, most of the time which could be negative for malignancy and give false negative result as occurred in our case. Ultrasound guided core biopsy of suspected intra cystic mass has been suggested by many authors to differentiate benign from malignant papillary neoplasms but failed to distinguish in situ from invasive papillary carcinoma as invasion is found in peripheral part of the tumor [9]. Tomonori et al. [10] also suggested necessity of excisional biopsy. FNA and core needle biopsy have not found sufficient most of the time.

Review of literature showed 12 high-grade EPCs without associated conventional stromal invasion. To further characterize these highgrade tumors, a series of invasive papillary carcinomas were assessed for the coexistence of EPC. The literature was also reviewed. Approximately 3% of pure EPCs showed high-grade features as defined by nuclear pleomorphic and increased mitotic activity. These tumors not only showed histological features associated with aggressive behavior, but were also often hormone receptor-negative, tended to be of larger size, and were more frequently associated with stromal invasion. Of the 10 patients with follow-up data, one with pure high-grade EPC developed recurrence and died of her disease. No definitive guidelines for treatment of IPC. In case of IPC alone, IPC with DCIS and IPC with invasion complete surgical excision of the tumor with clear surgical margins is the recommended surgical management [11,14]. Sentinel lymph node biopsy may be alternative to full axillary dissection in patient with IPC and associated invasive carcinoma [12]. Wide local excision was performed in our case in view of atypical ductal epithelial cells on cytology and sentinel lymph node biopsy was not done. Data published in many articles recommends adjuvant radiotherapy for IPC associated with invasion and or DCIS. Mayanja et al. [6] concluded that most important factor determining use of radiotherapy and endocrine therapy is associated pathology and patients with pure IPC were less likely to undergo radio and endocrine therapies.

Although rare, IPC has an excellent prognosis. The largest reported study of 917 cases carried out on IPC patients found no difference in the relative cumulative survival rate in the patients with IPC alone or associated invasive cancer followed up at 10 Years [13].

This retrospective study was performed in compliance with the ethical committee of the University of Taif.

Almamlka Lab, KSA for their support.