An Unusual Cause of Gastrointestinal Bleeding: Gastric Fundic Gland Polyps

Copyright: © 2014 Protic MB, et al. This is an open-access article distributed under the terms of the Creative Commons Attribution License, which permits unrestricted use, distribution, and reproduction in any medium, provided the original author and source are credited.

The most usual causes of iron deficiency anemia are related to the digestive disease: acute or chronic blood loss (due to cancer or polyp of colon or stomach, peptic ulcer, nonsteroidal anti-inflammatory drugs use, inflammatory bowel disease, vascular lesions) or reduced iron absorption (in celiac disease, small bowel bacterial overgrowth, Whipple’s disease, lymphangiectasia, gastrectomy and gastric atrophy, gut resection or bypass). Fundic gland polyps are not common causes of gastrointestinal bleeding, but in this case we were able to proof that the bleeding was the result of these unusual large polyps.

What is reported here is a case of occult gastrointestinal bleeding caused by torsion of sessile polyps in the patient who received chronic low-dose acetylsalicylic acid therapy. The patient was successfully treated with endoscopic resection of largest polyps. This report could be useful in cases of sporadic fundic gland polyps and unrecognized cause of bleeding or iron deficiency anemia; especially in instances in which anticoagulant or low-dose aspirin therapies were applied.

Fundic gland polyps (FGPs) are the most common type of gastric polyps. They may be found in up to 1.9% of patients undergoing oesophageo-gastroduodenoscopy [1]. There are two distinct clinico-pathological entities of FGP: sporadic and syndromic [2]. The sporadic form is defined as multiple fundic gland polyps in patients without familial adenomatous polyposis syndrome (FAP) [3]. This type is usually found in middle aged females and is associated with prolonged proton pump inhibitor therapy. The presence of sporadic FGPs has been inversely correlated with Helicobacter pylori (H. Pylori) infection [4]. The major histopathological characteristics of FGPs are cystically dilated fundic glands, lined by flattened parietal cells, chief cells and variable numbers of mucosal neck cells. The surface epithelium is non-dysplastic [5]. The less common syndromic form is associated with FAP and attenuated familial adenomatous polyposis syndrome (AFAP). This type of FGP is equally found in both genders as well as in younger age groups [6].

We report a case of the patient with sporadic fundic gland polyps as a major source of profound GI bleeding and consequent iron deficiency anemia. Although the chronic blood loss was massive, it could not be diagnosed by standard endoscopic techniques.

Oesophageo-gastroduodenoscopy was performed. No blood was detected in the stomach. Multiple peduncular polyps (size 5-15 mm) were found in the gastric fundus and corpus. A Rapid Uraesa test (HUT® Astra Zeneca) for H. pylori was negative. Colonoscopy findings were normal, without signs of bleeding or colonic polyposis. Histological assessments of polyp’s biopsies clearly revealed gastric foveolar cystic glandular ecstasies. No signs of intraepithelial neoplasia or dysplasia were found.

A year later, the patient was admitted to another hospital due to severe iron-deficiency anemia (Hemoglobin 62 g/l). Upper endoscopy was repeated: multiple sessile polyps were found in the region of fundus and corpus. Capsule endoscopy excluded Meckel’s diverticulum and other small intestinal lesions as a bleeding source. Colonoscopy was normal again. Histology evaluation of the resected largest gastric polyps confirmed the diagnosis of gastric fundic cystic polyps. The patient was discharged after the complete correction of anemia.

Three months later, she was admitted again, due to new episode of melena and severe hypo-chromic anemia (Hemoglobin 64 g/L). Tc (99 m) labeled erythrocyte scintigraphy was performed and did not explain the cause of bleeding. Since the occult intestinal bleeding was still not properly diagnosed, we decided to inject low molecular heparin for three days followed by an upper endoscopy. The ethical issue may occur in this case considering the application of anticoagulant therapy to a patient with occult bleeding. The decision for this unusual diagnostic procedure has been made by a team of physicians consisting of gastroenterologists, surgeons and cardiologists since the situation was unclear despite numerous investigations, the anticoagulation could be stopped any time and the patient was very intensively surveyed as an inpatient for the time of anticoagulation. Diffuse bleeding from the base of multiple big gastric sessile polyps was observed. Notably pedunculated polyps that were torn showed a significant bleeding (Figures 1 and 2). Therefore, large polyps were endoscopically resected by electrocautery snare. Normally, 5-20 largest polyps have been resected, especially those that were torn and bled at their basis. New histology feature of resected gastric polyps confirmed the diagnosis of gastric fundic cyst polyps (Figure 3). No signs of adenoma, hamarthroma, dysplasia or neoplasia were found. Three more sessions of polypectomy were performed. Since then, the patient did not have recurrent episode of GI bleeding or iron deficiency. Endoscopic resection had a long lasting effect. Laboratory assessment showed normal hemogram and iron studies over a period of 11 months. 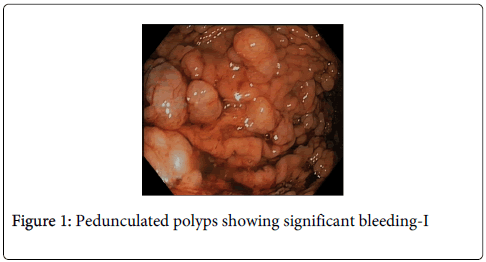 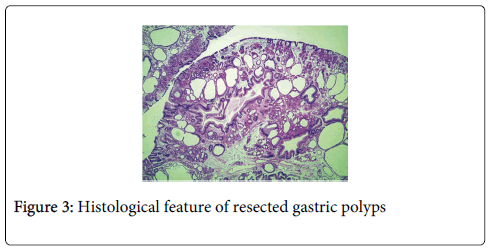 Recently, rising numbers of patients with fundic gland polyps are being detected during endoscopic studies, predominantly in the group of those treated with proton pump inhibitors for prolonged periods of time [7]. Long-term use of PPIs is associated with up to fourfold increase in the risk of developing FGPs [8]. Yet, this association remains a matter of debate with some studies supporting it and others disproving it [9,10]. FGPs may occur sporadically, or associated with familial adenomatous polyposis (FAP) syndrome. Sporadic polyps may be single or multiple and are found almost exclusively in patients without H. pylori infection [11]. Pathophysiologic explanation suggests that enzymatic degradation of the gastric mucus by H. pylori protease may facilitate the glandular outflow and thus protect against retention and cystic dilatation [6]. Endoscopically polyps appear as smooth, glassy, sessile, hemispherical and colored like surrounding mucosa. Histologically, the basic lesion consists of one or more cystically dilated fundic glands, lined by oxyntic epithelium, which is usually attenuated [7]. Even though sporadic and FAP-associated FGPs are endoscopically and histologicaly similar, genetic studies [12] showed distinct changes in cell growth-Wnt signaling pathway: sporadic polyps – were related to activation of β catenin mutation, whereas syndromic FGPs were linked to the somatic mutation in adenomatous polyposis coli (APC) gene.

Our patient fulfils all typical criteria for the diagnosis of sporadic FGPs: female, in the age of sixties, with gastro-oesophageal reflux symptoms and distinctive endoscopic features – multiple sessile polyps of gastric fundus and coprus. Most of the polyps had a diameter from 5-10 mm. The size of few largest was up to 15 mm. In contrast to adenomatous polyps where a size more than 2 cm is indicative for the determination of malignant potential, the size of sporadic FGPs is not considered as a risk factor for malignancy [13]. Similar to the cases published in literature [3,6,7,11], our patient was also H. pylori negative. Repeated colonoscopy and capsulendoscopy ruled out existence of other polyps in small and large bowel and confirmed the diagnosis of sporadic FGPs. Based on all criteria typical for sporadic FGPs, we considered that further genetic analysis was not necessary.

Only a few cases of sporadic FGPs and GI bleeding have been reported in the literature [14,15]. Most of the cases were associated with some hematologic disorders. Our patient had no hematologic problems, but according to arteriosclerotic disease she was treated with low dose ASA therapy for extended period time. It can be assumed that the profound bleeding resulted from the torsion of the biggest peduncular polyps and subsequently compromised vascular flow.

Although low dose aspirin (LDA) is successfully used for the prevention of cardiovascular and cerebrovascular events, it has been proven that LDA also decreases the gastric mucosal prostaglandin levels and causes significant gastric mucosal damage, the risk of gastric and duodenal ulcers as well as gastrointestinal bleeding [16]. On the other hand few studies [17,18] showed that proton pumps inhibitors reduced the risk of the LDA associated gastric or duodenal ulcers.

It is generally accepted that there were no guidelines for surveillance and treatment of sporadic FGPs. It is believed that sporadic FGPs had low malignant potential [19]. General recommendation from literature is to remove larger polyps than 1 cm and withdraw PPI therapy [7]. From our standpoint this recommendation is even more instructive since large polyps can be twisted around its axis, compromise circulation and lead to bleeding.

What is reported here is a case of occult GI bleeding caused by torsion of sessile polyps in the patient who received chronic aspirin therapy. The patient was successfully treated with endoscopic resection of largest polyps. This report could be useful in cases of sporadic gastric FGPs and unrecognized cause of bleeding or iron deficiency anemia; especially in instances in which anticoagulant or ASA therapies were applied.