An Unusual Manifestation of Hair Dye Allergy with Occupational Consequences

Copyright: © 2014 Antelmi A, et al. This is an open-access article distributed under the terms of the Creative Commons Attribution License, which permits unrestricted use, distribution, and reproduction in any medium, provided the original author and source are credited.

Contact allergy to p-phenylenediamine (PPD) and other hair dye components have become an increasing problem in Europe [1,2]. Severe skin reactions from PPD in black henna tattoos and in hair dyes have been reported [1-3]. In this case an unusual manifestation of hair dye contact allergy is reported and its consequences both with regard to patch testing and occupational problems.

A 54-year old female with no history of atopy or previous dermatitis, working as an assistant nurse at the department of cardiology since many years, was referred to the department of occupational dermatology. The reason for referral was relapsing dermatitis with carbuncles progressing over a period of 3 years. Since the first episode the patient had had relapses of carbuncles on the ears, shins, elbows and buttocks lasting for a couple of weeks. Due to this she had been treated with oral antibiotics several times. Staphylococci were found in cultures from the carbuncles and due to risk of transmitting infection to her patients in the ward she often had to go on sick-leave.

The patient dyed her hair regularly 5-8 times annually, since more than 20 years. She had herself started to suspect the hair dye when noticing that always after dyeing her hair she had an oozing and itching dermatitis on the scalp and ears. She had mentioned this to her doctor but no one had believed her until she was referred by a doctor of occupational medicine. At referral she had been on sick leave for 3 weeks whilst on flucloxacillin, due to a carbuncle in the groin. A few days prior to the infection she had again dyed her hair at the hairdresser. After the dyeing, she had developed a dermatitis on her scalp and ears. She also experienced severe pruritus all over her body. As the symptoms had increased treatment with corticosteroids orally, bethametasone, was started by the referring doctor. Initially, a dose equivalent to 60 mg prednisolone was given for 2 days, and then the dose was slowly tampered off, continuing with 50 mg for 2 days and then 40 mg. This was the dose the patient was on when seen in the department for the first consultation (Figure 1). The medication had given significant relief of symptoms but the patient still had an active dermatitis on her ears and she had starting having eczematous lesions on her face, neck and upper trunk. Figure 1: Patient´s ear after having dyed her hair 2 weeks prior and put on oral corticosteroids one week before the picture

Patients under investigation for suspected hair dye allergy are in Malmö normally patch tested to the hairdresser´s series and the baselines series including textile mix and black rubber mix, the latter are often also tested separately due to the known association with PPD allergy and due to the fact that the patients might very well have acquired a contact allergy to a substance found in these series which might at a later point be of clinical relevance to the patient tested. Here due to the fact that the patient was on high doses of corticosteroids and had just recently had a widespread dermatitis a selected first testing (see below) was performed.

At the patch test reading positive reactions to PPD and to the other related hair dye substances (Table 1) was found. The reaction to hydroquinone was impossible to read because of severe, spreading and oozing reaction of the adjacent PPD test. Because of the test result and re-appearing severe general pruritus, betamethasone valerate was given intramuscularly (equivalent to 60 mg prednisolone).

The patient was called back when having been off systemic corticosteroids for a fortnight in order to retest the substances within the hairdressing series that was initally negative, and to test to the baseline series as well as to a sample of her own coloured hair. She was now clinically almost healed. At this patch testing session the patient was positive to black rubber mix, the textile dye mix, diaminodiphenylmetan and to the metals nickel and palladium. The patient had no additional positive reaction in the hairdressing series. When patch tested with the black-rubber mix and textile dyes separately, she was allergic to N- isopropyl-N-phenyl-4-phenylendiamine, and N- cyclohexyl-phenyl-4-phenylendiamine, disperse orange 1 and 3 and 34, disperse yellow 3, disperse red 1 and 17, disperse blue 85, basic red 46. The patient was negative to her own hair.

The patient was adviced not to dye her hair or use PPD containing products such as tourist tattoos containing black henna. Information on avoidance to the other found allergens was given. The patient stopped dying her hair and when seen 12 months later she was still totally cleared with no abscesses or carbuncles and no eczematous dermatitis. She was then patch tested to a dilution series of PPD, to her hair hair dye in 0.5% and 0.05 % pet and to thin layer chromatograms of PPD and oxidised PPD (Figure 2) and and Badrowski’s base (BB, N,N''-(2,5-diamino-2,5-cyclohexadiene-1,4-diylidene)bis-4-benzenediamine). BB has earlier been pointed out as one substance possibly responsible for PPD-related contact allergy and a substance that can be formed in the process hairdyeing [4]. She was positive to PPD in several dilution steps down to 90 ppm, had a strong reaction to Bandrowski’s base and reacted to three spots on the thin layer chromatograms. The hair dyeing dye gave only erythema at the higher concentration. 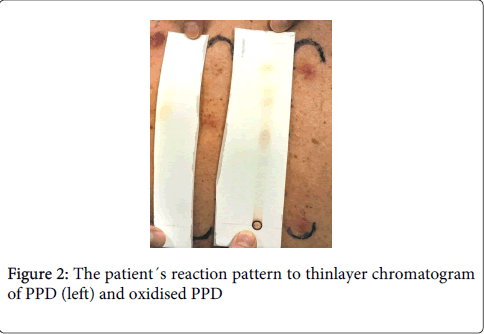 It is hypothesized that the patient had a systemic contact allergic reaction when dyeing her hair [4] even if the patient did not actually have a clinically visible dermatitis elsewhere on the body, but due to increased itching after hair dyeing she must have spread staphylococci to the regions where she experienced itching and thus had relapsing abscesses. Her periodic abscesses had a clear correlation in time with when dyeing her hair. Interestingly, when coming for patch testing she was already on oral corticosteroids and even so the patient when patch tested had positive reactions to the relevant allergens. This emphasizing the fact that when there is a clear clinical suspicion of a relevant strong allergen it is absolutely possible to patch test even if the patient is on treatment with oral corticosteroids. One only has to remember that a negative reaction cannot be regarded as a true negative reaction but the patient must be retested when not on systemic corticosteroids. Neither can of course the patients reactivity be evaluated properly. When a patient has a supposed generalized flare of dermatitis it is often advised not to patch test in the acute phase. In this case, however, due to the long suffering of the patient and the fact that she had to be on sick-leave the patient was patch tested with the allergens that was suspected and no generalized reaction was seen and the positive reactions could be verified when retested. The suppressive effect of systemic corticosteroids on patch test reactions has previously been studied [7,8] and immunosuppressive therapy is often seen as a relative contraindication to patch testing. The urge for finding a possible allergen in order to improve the patient’s immediate symptoms should probably govern whether the patch testing should be performed even if the patient is on medication and should, as long as re-testing when healed is a possibility, not be considered problematic. At follow up the patient was patch tested to 2 thinlayer chromatograms of oxidised PPD and unoxidised PPD and reacted to two spots on the oxidised and for one in the thinlayer of PPD. Thinlayer chromatograms separate complex mixtures and when patch tested thus gives an indication on whether a patient is actually allergic to several allergens found within the complex mixture. New research indicates that patients allergic to PPD actually have different patterns of reactivity [9] and this case also indicates this. In this case the patient was also positive to dyes within the textile mix series and ingredients within the black rubber mix, patch tested due to their known possible association to PPD [10]. The case once more emphasizing the problem with contact allergy to PPD which so often leads also to other allergies that may at a later stage be found with a clear clinical relevance [10]. The case also indicates the importance of paying attention to the fact that the patient´s story, even though hard to believe, might actually explain the symptoms. Furthermore, it indicates that a cosmetic treatment/a leisure activity when having a strong contact allergy and an allergic contact dermatitis can actually have a serious impact on a patient´s ability to work.