Coronary artery anomalies refer to various congenital abnormalities of epicardial coronary arteries involving their origin, course, and structure. Despite the low prevalence, they are important to recognize since they are associated with an increased risk of sudden cardiac death, syncope and angina. We present a case of a 83 years old male presenting with exertional angina who was found to have a very unique and rare coronary anomaly on coronary angiography which has never been reported in the past.

Any variation observed in less than 1% of the general population is defined as anomalous or abnormal. The presence of coronary abnormalities has been observed in 1.3% of the patients undergoing cardiac catheterization [1]. It is important since after hypertrophic cardiomyopathy, coronary artery abnormalities are the second most common cause of sudden death in young athletes [2] and are associated with increased risk of developing coronary atherosclerosis within the variant vessel [3].

Increasing use of diagnostic coronary catheterization may reveal even more number of such anomalies and their association with cardiovascular events. We report on a patient with typical angina, a large left atrial artery arising from superdominant right coronary artery in the presence of small and anomalously arising left circumflex artery.

We present a case of 83 years old male who presented with six months history of typical exertional angina. Patient was a smoker. There was no history of prior episodes of myocardial infarction, stroke, coronary artery disease, or personal or familial histories of sudden cardiac death. He was normotensive and general physical and systemic examination did not reveal any abnormality. All laboratory tests were normal including normal blood sugar levels and lipid profile. The resting electrocardiogram showed left bundle branch block. 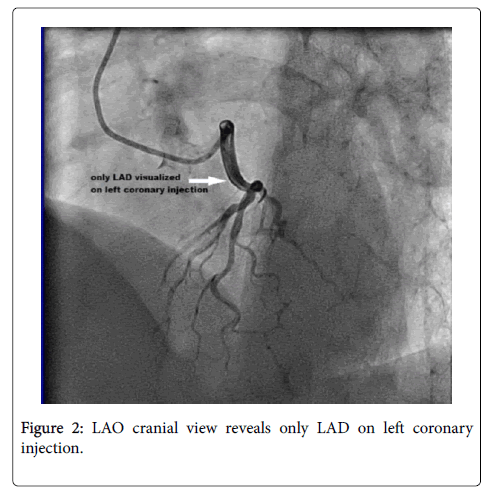 Variant origin of the LCX from the right sinus of valsalva or right coronary artery was first described by Antopol and Kugel in 1933 [4]. This has been previously reported to be one of the common congenital coronary variant, with a prevalence of 0.67 to 0.80% at coronary angiography [1]. This anomaly is usually considered benign [5] and despite being mostly asymptomatic, there are reports of patients presenting with myocardial ischemia, manifesting as angina, syncope, arrhythmias, and even sudden death [6].

Similarly origin of left atrial circumflex from right coronary artery has also been described as a very rare coronary anomaly with only a few case reports available. Earlier studies have shown that it is important to have a detailed knowledge of left atrial branches during catheter ablation for atrial fibrillation [7]. Presence of both the above mentioned anomalies together has never been reported in the past. One should expect absent left circumflex artery in the presence of super-dominant right coronary artery especially if it is not visualized in left coronary injection.