Copyright: © 2016 Ongeri L, et al. This is an open-access article distributed under the terms of the Creative Commons Attribution License, which permits unrestricted use, distribution and reproduction in any medium, provided the original author and source are credited.

Prevalence estimates of antepartum depression vary depending on methodology, period of gestation and with the region the study is conducted. A recent systematic review estimated a prevalence of 12% in the 3rd trimester for developed countries [16]. In Sub-Saharan Africa rates ranging from 8.3% to 39% has been reported [17-20]. Estimates of postpartum depression range between 10-15% in developed countries [21] while higher rates are seen in low and middle income countries ranging between 15 and 57% [21-23].

Antenatal risk factors that have been found to be associated with postnatal depression include marital discord, current or past emotional, physical, sexual or verbal abuse by partner, lack of social support, pregnancy unwanted by mother, stressful life events during pregnancy, past or present psychiatric disorders in the mother, antepartum depression, prenatal care not started until the third trimester and poor relationships of the mother with her parents and mother in law [24-26].

In addition to providing information on prevalence and risk factors of antepartum and postpartum depression, longitudinal studies that follow the same cohort of women during pregnancy right into the post-partum period have the advantage of reduced chance of recall bias which is a limitation frequently seen in cross sectional studies of postpartum mental health.

Predicting the risk of postpartum depression based on the antenatal depression correlates has scarcely been studied. This is the first Kenyan study that has measured antepartum risk factors for postnatal depression in a cohort of pregnant women residing in an urban resource poor setting in Nairobi, Kenya.

This was a longitudinal study with initial assessment of pregnant women in their third trimester and a follow up of this same cohort at 6-10 weeks postpartum.

The study was approved by the Kenya Medical Research Institute’s ethical and review committee and was carried out between March 2014 and December 2014. Participants were recruited from the maternal and child health clinics of 2 major public hospitals (Mathari Teaching and Referral Hospital and Mbagathi District Hospital) in Nairobi, Kenya. The maternal and child health clinics offer both antenatal and postnatal care including family planning and infant immunization. Majority of the women served by these two hospitals are from an urban resource poor catchment area.

Inclusion criteria: pregnant women aged between 18 and 49 years in their 3rd trimester. As the study had a follow up time point to assess postnatal outcome, participating women had to be willing to seek postnatal care at the same facility. The pregnancy gestation was verified using the patient attendance card. A total sample size of 188 participants was conveniently recruited from the outpatient waiting area of the maternal and child health clinic of the two hospitals. Following registration at the MCH clinic the study nurses would inform attending women in their 3rd trimester of this on-going study survey. Voluntary informed consent was sought after a nurse trained on the protocol gave all explanation about the study. Those that fitted the eligibility criteria were enrolled into the study. Of the women who met the study inclusion criteria 7 refused to participate. The reasons given for refusal to participate were time constraints (4) and others (3) opted to first ask permission from their partners before enrolment. About 20 women who were over 18 years and in their 3rd trimester could not participate as they did not plan to continue with follow-up in the same facility (This being a hospital setting women preferred to attend antenatal clinic here for ease of delivery in a hospital setting but be followed up in a smaller clinic closer to their residence for vaccination and family planning during the post-partum period) - it is for this same reason that 16 participants (8.5%) were lost to follow-up.

Social, demographic and clinical history data were collected using a face to face interview with structured questionnaires. Depression levels were then assessed at baseline and again at 6-10 week postpartum follow up using the EPDS. The structured social, demographic, clinical history questionnaires and the EPDS screening tool were administered by trained nurses working at the facility. Nurses were trained to conduct the interviews as part of a larger study to see the feasibility and acceptability of integrating the EPDS into the MCH clinics.

Data analysis was done using STATA version 13 (Stata Cop LP, Texas 77845 USA. Continuous data were summarized using means (SD) or median (IQR) while categorical variables as proportions. Rates of Antepartum depression was determined by the proportion of women who screened 13 and more for probable depression on the EPDS at (P 36+). To determine the risk factors for postpartum depression, individual socio-demographic and clinical variables were analysed using logistic regression. All tests were two sided and the level of statistical significance was set at 5%. 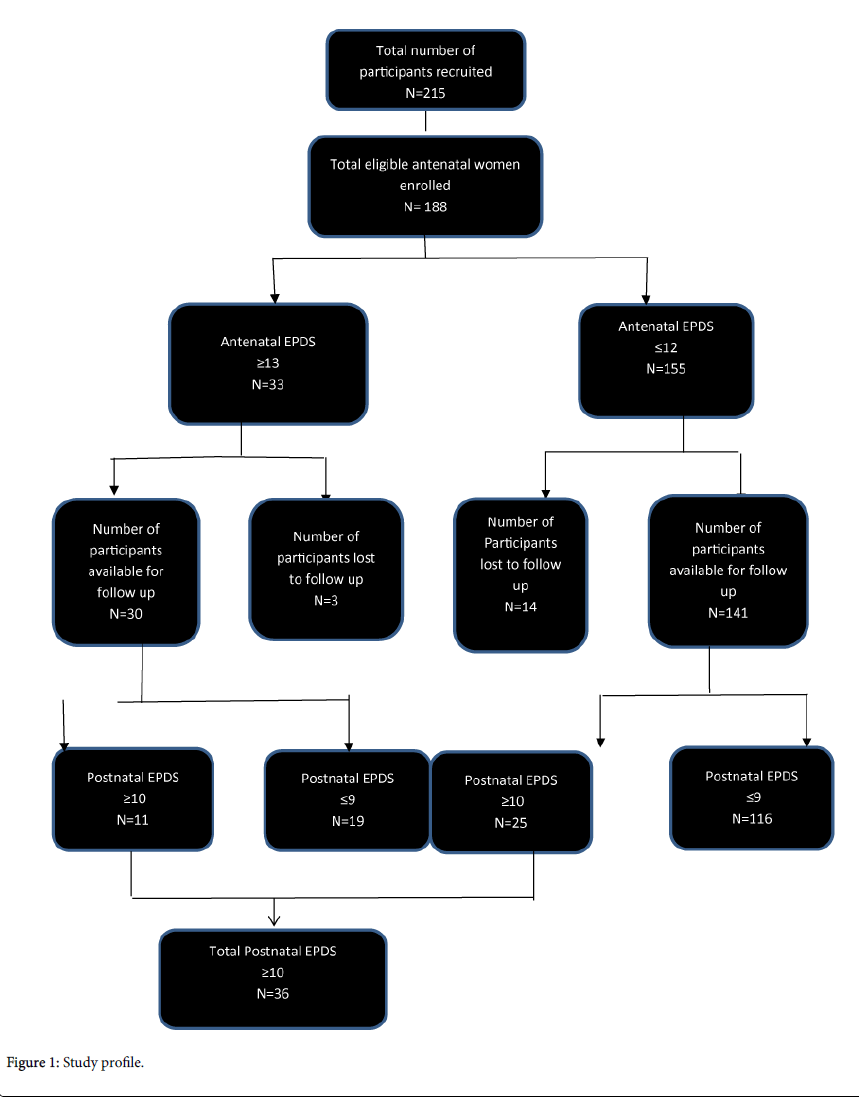 No significant association was found with age, marital status and level of education.

The risk of having postpartum depression was increased in women found to have antepartum depression, women reporting economic stress and those who reported experiencing both physical and verbal conflict in their relationships.

Antepartum depression rate of 18% is higher than estimates from developed countries (13%) [38], but falls within the range of rates seen in Sub Saharan Africa (8.3-39%) 6. Higher rates in Sub Saharan Africa have been attributed to higher rates of poverty, intimate partner violence and HIV infection [2,35,39-41].This study recruited women from an urban poor resource setting. Both urban living and poverty have been shown to contribute to the risk of developing perinatal depression. Majority of women from urban settings live in nuclear families hence may lack strong interpersonal support networks seen in their rural counterparts [42]. A low socioeconomic status has been shown to increase the risk of depression through increased exposure to traumatic events and stressors [43-45].

Findings from a recent meta-analysis report conducted on over 14,000 subjects found depression during pregnancy as one of the strongest predictor of postpartum depression [46]. Similarly, a follow up study looking at depression in pregnancy and in the postpartum period found significant association with both antepartum depression and history of exposure to violence and conflict [25,47,48]. Gender based violence both physical and verbal is particularly destructive during pregnancy as this is the period women are most vulnerable and dependent. Other significant associations reported in previous similar studies include stressful life events, unwanted pregnancy and having a non-supportive husband [6,46] however, these were not statistically significant in our study.

A limitation in our study was the small and non-probability convenient sampling. The size and convenience of the sample may limit the generalizability of the study.

As this was part of larger study to confirm feasibility of integrating EPDS depression screening in maternal and child health clinics, we did not include a concurrent use of a diagnostic tool to confirm depression diagnosis.

This research was supported by a grant from the Kenya Medical Research Institute. The authors are grateful to Francis Creed, for his help in editing the manuscript and the mothers who participated in the study.