Aortopulmonary Window in an Infant with Type I Osteogenesis Imperfecta: Case Report

Some studies have shown an association between osteogenesis imperfecta and congenital heart diseases, but only those involving changes in the connective tissue of heart structures, such as heart valves, chordae tendineae, fibrous rings, ventricular septum and aortic root (dilatation). The concomitant presence of osteogenesis imperfecta and aortopulmonary window has not been reported in the specialized literature, rendering the present case report uncommon. We report the case of a male infant aged 2 months and 15 days, diagnosed with type I osteogenesis imperfecta and type I aortopulmonary window, submitted to surgery to completely repair his heart disease. In addition, we provide a literature review and discuss the clinical and surgical approaches to this infant, emphasizing that previous multidisciplinary planning is essential for a successful outcome.

Osteogenesis imperfecta (OI) is a genetically heritable disease characterized by imperfect bone formation, which leads to bone fragility and bone mass loss [1]. This occurs because both the structure and function of type 1 collagen are affected by gene mutations [2]. OI has an incidence of approximately 1 per 15,000-20,000 births, and a heterogeneous clinical presentation, ranging from asymptomatic to lethal [3].

Initially, OI was classified by Sillence, et al. [4,5] into 4 types based on its clinical characteristics and severity. Recently, types V, VI, VII and VIII [6,7] have been added, and, despite having no defect in the collagen gene, they are characterized by bone frailty (Table 1).

The association of OI with congenital heart disease leads to changes in the connective tissue [4,8]. Such changes have a structural impact on the cardiovascular system, affecting heart valves, chordae tendineae, fibrous rings, interventricular septum, arteries and the aorta [9,10]. Publications on severe cardiac structural changes in patients with OI have been infrequent, most studies reporting on aortic root dilatation and valvular dysfunction in those patients [11]. The major medical journals lack reports on the association of OI with congenital aortopulmonary window. We report the case of an infant with OI and congenital heart disease, submitted to surgical repair, its relevance lying in the presence of OI as an underlying bone disorder. In addition, the clinical, anesthetic and surgical approaches are discussed.

The patient is a male twin infant, born by Cesarean delivery at term and birth weight of 2460 g. His mother has type I OI. He was admitted to the neonatal intensive care unit (ICU) because of respiratory distress in the first hours following birth.

In the neonatal ICU, he required ventilation with positive pressure and nasal prong. As the dyspnea persisted, he was submitted to several inconclusive echocardiographies and to ineffective treatments. The infant was, then, referred for new imaging tests at a specialized hospital, where an echocardiogram raised the suspicion of heart disease. A tomographic angiography confirmed that by evidencing proximal aortopulmonary window and increased pulmonary flow. Diuretic was then initiated, resulting in improvement of the respiratory findings, and progressive ventilator weaning to room air. The infant was then referred to a specialized hospital that provided heart surgery.

On the third day of admission, the infant was sent to the operating room for total repair of his heart disease. He was carefully placed on the operating table, which was topped with an “egg-box” mattress (Figure 2). The infant was properly positioned for surgery, with pads placed under the pressure points. Orotracheal intubation was performed with a flexible tube with neither difficulty (Cormack 3–Figure 3) [17]. The left femoral vein was punctured, and invasive arterial pressure measurement was installed in the right femoral artery (Figure 4). 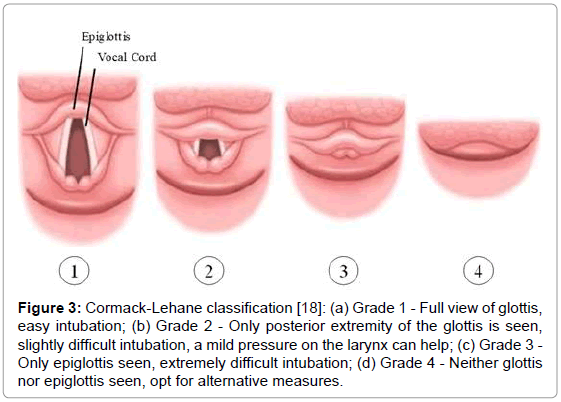 The aortopulmonary window was corrected with aortoplasty and enlargement of the pulmonary artery at the site of connection to the aorta, by using primary suture (Figures 5-8). The infant received intraoperative red blood cell concentrate, platelets, albumin, and recombinant fibrinogen. The surgery was uneventful. 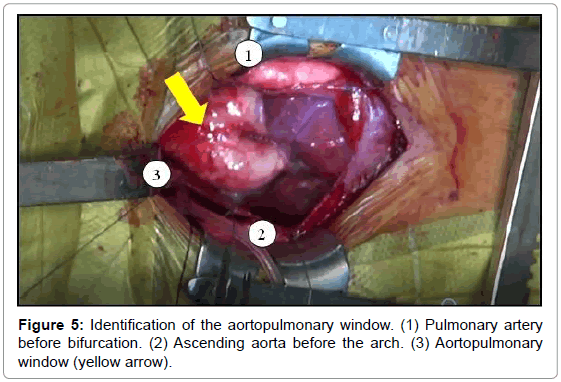 In the immediate postoperative period, massive bleeding trough the mediastinal tube was identified. Hemostasis review in the operating room revealed surgical site bleeding. The addition of an absorbable hemostatic agent stopped the bleeding, and the infant left the operating room after 2 h.

The control echocardiogram evidenced closed aortopulmonary window, with no residual shunt, minimum aortic regurgitation, and mild overload of the left cavities with mild myocardial dysfunction. By the tenth postoperative day, the infant was on a full diet and breathing room air, being transferred then to his hospital of origin.

There the infant was discharged at the age of 4 months and 8 days, breathing room air, and suckling breast milk properly.

Aortopulmonary window is a non-restrictive communication between two great arteries, with increased pulmonary flow, rapidly leading to heart failure and pulmonary hypertension. It was first described in 1830 by Eliotson and its first successful surgical repair was reported by Gross at Boston Children’s Hospital, in 1952 [18].

Patients older than 6 months are usually submitted to cardiac catheterization before surgery to estimate the extent of pulmonary hypertension and its reversibility [21].

The treatment of aortopulmonary window is surgical. To avoid irreversible pulmonary hypertension, surgery should occur as early as possible, preferably before the age of 6 months. The repair can range from a simple suture in small communications to the need for a vascular prosthesis. When the defect is early diagnosed and in the absence of other malformations, intraoperative mortality is low, the long-term prognosis is satisfactory, and the reoperation rate is low [22]. If the diagnosis is delayed, pulmonary resistance should be assessed, because progression to an irreversible pulmonary vascular disease contraindicates surgery [23]. The major postoperative complication is stenosis of the pulmonary branches [24]. The prognosis of nonsurgically treated patients is poor, with 40% mortality in the first year of life, the other 60% dying during childhood because of congestive heart failure [25].

It is worth noting the need for multidisciplinary strategic planning prior to surgery for such infants, emphasizing the clinical, anesthetic and surgical approaches, to avoid fractures and complications inherent in OI. Find below the precautions the medical team should take to prevent pitfalls.

Bone fragility and bone mass loss predispose patients with OI to fractures. In addition to careful moving, it is extremely important to properly position those patients on the operating table [26] (Figure 4), which should be covered with an “egg-box” topper, and to apply pads to all pressure points (Figure 2).

Patients with OI have increased capillary fragility, decreased factor VIII level, and defective platelet aggregation induced by endothelial collagen [27,28]. Bleeding can occur despite the normal results of coagulation exams, hindering the prediction of intra- and postoperative bleeding [29]. Thromboelastogram might not be useful. Thus, the infusion of platelets and hemostatic components is always recommended to those patients during surgery [30].

Malignant hyperthermia is a pharmacogenetic disorder, whose crisis is triggered during general anesthesia by halogenated compounds, such as halothane, isoflurane, sevoflurane and desflurane, as well as by the muscle relaxant, succinylcholine. Anticholinergic drugs have been reported as possible inducers [31].

Patients are usually asymptomatic, and the crisis begins suddenly. The clinical signs and symptoms of malignant hyperthermia are progressive body temperature increase reaching up to 44°C; cardiovascular changes; excessive sweating; muscle stiffness; dark urine due to myoglobinuria; and general bleeding [32]. Some case reports of hyperthermia in patients with OI are not of the malignant form, but of a hypermetabolic state of unknown origin [33]. The supposed explanation for that is abnormal central regulation of body temperature or abnormal cell metabolism [34]. Patients with OI and hyperthermia can be controlled with body cooling, increased oxygen offer, and intravenous administration of sodium bicarbonate, vasoactive amines, and dantrolene sodium. If not properly and early treated, malignant hyperthermia can have a 70% mortality rate, which can be reduced to 9% with the use of dantrolene sodium [26].

Intubation: Cervical hyperextension should be avoided, because dislocation of the atlanto-axial joint or fracture of its bones can occur, in addition to basilar invagination [35]. The best and safest method is fiberoptic intubation [36], in addition to applying shoulder pads to prevent any cervical dislocation. Another alternative is the use of a laryngeal mask, and, in extreme cases, urgent tracheostomy. Intubation should be rapid, avoiding mucosal injury, and jaw and dental fractures [37].

Ventilatory support: Patients with OI often have kyphoscoliosis and thoracic cage deformities. Scoliosis occurs in only 26% of the individuals with OI under the age of 5 years, increasing to 82% of older children [38]. Those changes lead to limitations of the respiratory function [39], with a reduction in vital capacity and lung compliance, and hypoxemia due to inefficient ventilation/perfusion ratio [34]. This might require, during mechanical ventilation, higher oxygen concentration and greater positive end-expiratory pressure. Other ventilatory parameters recommended for those infants are: tidal volume of 4-8 ml/kg, and inspiratory pressure lower than 30 cm H2O [40].

Because OI can lead to intra- and post-operative complications, previous multidisciplinary planning is essential for the surgical success of patients with that disease. Prevention of pitfalls with measures already established increases the safety and success of the procedure.

Copyright: ©2017 Arnet V, et al. This is an open-access article distributed under the terms of the Creative Commons Attribution License, which permits unrestricted use, distribution, and reproduction in any medium, provided the original author and source are credited.