Population growth is a major concern in developing countries in view of its impact on broader socio-economic development. In Sub- Saharan Africa, including Ethiopia continued high fertility levels along with declining mortality rates have resulted in a wide gap between birth and death rates and subsequently in high annual population growth rate. Factors contributing to high fertility include low socio-economic development, deeply ingrained cultural values for large family sizeand low levels of contraception [1].

Currently, 500 million women in the developing world are using some form of family planning, thereby preventing 187 million unintended pregnancies, 60 million unplanned births, 105 million induced abortions, 2.7 million infant deaths, 215000 maternal deaths and 685000 children from losing their mothers due to pregnancy related deaths each year. However, another 200 million women throughout the developing world who would like to delay or limit their births but lack access to contraceptive methods. Providing these women with the services they need would prevent an additional 52 million unintended pregnancies and 23 million unplanned births each year [2].

In the past 40 years, family-planning programmed played a major part in raising the prevalence of contraceptive practice from less than 10% to 60% and reducing fertility in developing countries from six to about three births per woman. However, in half of the larger low-income and lower-middle income countries (mainly in Africa), contraceptive practice remains low whereas fertility, population growth and unmet needs for family planning are high [3].

Long-acting contraception is the most effective contraceptive methods that can be used for an extended period of time without requiring user actions [5]. Despite these advantages, LACMs remain a relatively small [6]. Therefore the objective of this study is to assess the level of long acting Contraceptive methods utilization and factors associated among reproductive age women attending maternal and child health clinic of ambo town health facilities.

The Study was conducted from November 1 to Dec 30, of 2013 in Ambo town. Ambo town is found in West Showa Zone, Oromia regional States and central Ethiopia. Ambo town is one of the town in the Zone which is located 115 KM from the capital city of Ethiopia to the western part of the country. In the town, there are 1 Government Hospital, 2 health center, 1 MCH Clinic, 20 private clinics, 12 private drug venders, ten kindergartens, eight elementary school, two secondary and one preparatory and one technical school. Based on the population censes conducted in 2007, the town has an estimated total population of 61835, of whom 30733 are males and 31499 females.

Institutional based quantitative cross sectional study was carried out for data collection process.

The source populations were all reproductive age women, who were attending maternal and child health clinics of governmental health institution in ambo town.

The study populations were all randomly selected women from 15-49 years and using family planning services in maternal and child health clinics of governmental health institution in Ambo town.

d=Degree of precision or margin of error 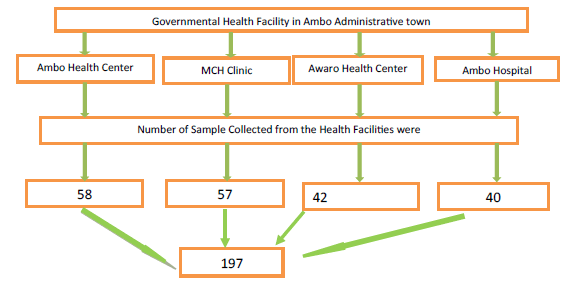 Structured questionnaire administered by the Interviewer was used to collect data from interviewees. The questionnaire was first prepared in English and then translated in to a fan Oromo. The questionnaire was translated back to English to observe consistency of the variables under question. The data was collected by all group Members after discussion on how to control the quality of data and efficiency of data to be collected. Before conducting the main study, pre-test was done on 5% of respondents selected from outside of the selected facility were interviewed both the interviewers and supervisors assessed clarity, understand ability and completeness of the questions. The findings were discussed among data collectors so that, the tool was modified before the actual data collection. The final interview was conducted using the modified Questionnaire.

Maternal factors: Parity, reason for visit, knowledge about LAPMs, myths and misconceptions, partner influences, choice of method, desire for another child, desire for spacing, satisfaction with information given, waiting time, clinical procedure, method accepted and information on the methods.

• LACM utilized: A mother who used at list one of the long acting contraceptive methods such as IUCD and Implants.

From the very beginning, a training of data collectors and Supervisors was undertaken. The principal investigators and supervisors were making day to day on site supervision during the whole period of data collection. At the end of each day, the questionnaire was reviewed and checked for completeness, accuracy and consistency by supervisors and investigators and corrective discussion were held with all the research team members.

After the data was collected it was checked and cleaned for completeness then analyzed using logistic regression to determine association between women’s long acting contraceptive method utilization and different socio-demographic variables by declaring statistical significance at p-value of <0.05 using SPSS window version 16.

Ethical clearance was obtained from Ambo University, college of medicine and health sciences. Permission for conducting the study was secured from each health facility managements. Informed consent was also obtained from each study participants.

Socio-demographic characteristics of the respondents

From the total 196 study respondents, about 106 (54%) and 44 (22%) were history of less or equal to two child and history of three to four child respectively. Again from the total respondents only 3.1% had history of abortion and only 5.6% were history of still birth. As to their perception about expected gap for the next pregnancy, the majority 40.8% and 37.8% were want to get the next child after five year and after three to four respectively. For the responsibility for deciding to have a child, the majority 75.5% of the respondents were determining to have child jointly with their partners but about 32 (16.3%) and 16 (8.2%) were determining to have child by the wife and the husband respectively (Table 2). 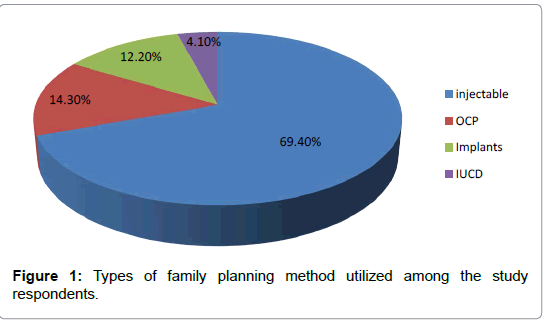 Association of long-acting contraceptive method utilization and the selected variables

Despite the fact that multiple methods of contraceptives are provided free of charge in all health care institutions, the study finding showed that the utilization of long acting family planning contraceptive methods still remains low (16.3%) and the utilization of contraceptive methods among the respondents were totally dominated by short acting family planning methods such as injectable and oral contraceptive pills (83.7%).Th is finding is consistent with the study done in Dendi District of west shoa zone, oromia regional state, Western Ethiopiawhich was 17.6% [7]. But this finding is higher than the study done in Mekele Town of Tigray region, north Ethiopia, which was 12% [8]. The reason might be due to the difference in year of study, sample size of the study population and health accessibility know a days than before and the general improvement of maternal health through implantation of different health programs. But, this study is lower than the study done in Indonesia (52%). This might be due to the difference in socio-cultural back ground difference among the two study population.

From the analysis of multivariate logistic regression, Maternal education, maternal awareness about LACMs, maternal discussion with their partners and mother who explained about the effective use of LACM by provider was associated the long acting contraceptive method. This finding was consistent with the study done in Dendi woreda of west shoa zone thatthe Educational status, spousal discussion, spousal approval and family size were found to have significant association with long acting reversible contraceptive methods use [7].

The current long acting FP prevalence among study participants were 16.4%. Regarding the utilization of long acting FP methods Women Awareness about LACM, Women who discussed with their partners about LACMs and Mothers education were found to be significantly associated. Therefore, Ambo town health office and west shewa zone health office work to create awareness on various family planning methods, increase competence of service providers and ensure long acting FP methods security in health care facilities. Other local government office including west shewa zone educational office and other stake holders should focus on increasing educational level by giving chance and encouraging women to engage in formal education. There should be enthusiasm to empower women regarding decision making and there should be more research’s done on community level for identification of other factors.

KM designed the study, prepared the proposal, participated in the data collection, performed analysis and interpretation of data and written the draft of paper.YK and AG assisted with the design, proposal preparation, approved theproposal and help writing the drafts of the paper. TG assisted with the design, revised drafts of the paper and prepared the manuscript and revised the manuscript. All authors read and approved the final manuscript.

Authors would like to thank Ambo University, College of medicine and health sciences, department of Nursing for giving this research project chance. We would like to extend our thanks to Ambo town Health office, Ambo Health center and Awaro Health centers. Our greatest appreciation goes to the study participants and data collectors.

Copyright: © 2018 Megersa K, et al. This is an open-access article distributed under the terms of the Creative Commons Attribution License, which permits unrestricted use, distribution, and reproduction in any medium, provided the original author and source are credited.