Copyright: © 2017 Matsushita T, et al. This is an open-access article distributed under the terms of the Creative Commons Attribution License, which permits unrestricted use, distribution, and reproduction in any medium, provided the original author and source are credited.

Objective: Most studies on arch biomechanics focus on the medial longitudinal arch (MLA) and its function; however, there are fewer studies on the forefoot transverse arch (FTA) biomechanics and its function is not well understood. This study aimed at investigating the function of FTA on foot kinetics and kinematics during gait.
Methods: Nineteen healthy participants (10 men, 9 women) with a mean age of 25.8 years were recruited. Each measurement was performed with the participants’ dominant foot. For evaluating FTA, transverse arch index (TAI) was measured using ultrasonic diagnostic equipment, which represented the relative height of FTA. Measurements were performed in a two-stance condition: 90% of weight bearing (90% WB), and 10% of weight bearing (10% WB). For evaluating MLA, arch height ratio (AHR) were measured with a ruler. A three-dimensional motion analysis system was used to capture and analyze foot kinetics and kinematics. Participants were instructed to walk barefoot along a 7 m walkway at regular walking pace (110 steps/minute). To examine the function of FTA, spearman’s correlation coefficients were calculated for non-parametric variables (TAI at 10% WB with foot kinetics and kinematics), to examine the relationship between MLA and FTA, (TAI at 10% WB with AHR), to examine flexibility of FTA, (the difference between TAI in 90% and 10% WB with vertical ground reaction force (GRFV)in the terminal stance).
Results: A significant positive correlation was observed between TAI and max GRFV in the terminal stance (r=0.50, P=0.03). There was no significant difference between TAI at 10% WB and AHR, A significant negative correlation was observed between the difference in TAI at 90% and 10% WB and, max GRFV in the terminal stance (r=-0.64, P=0.003).
Conclusions: The present study showed that GRFV in the terminal stance was positively correlated with the height of FTA, and that flexibility of FTA has relative to GRFV in the terminal stance during gait. It is important to measure flexibility of FTA as well as height of FTA so as to predict the risk of forefoot injury.

An abnormal foot posture can cause lower extremity injury by forming a kinematic chain. The structure of foot posture can be represented by three arches [1] the medial longitudinal arch (MLA), the lateral longitudinal arch, and the forefoot transverse arch (FTA). The functions of these arches are absorption and distribution of forces and stabilizing the body [2,3]. Most studies on arch biomechanics have been conducted on MLA and its function is well understood [4]. However, there are only a few studies on FTA biomechanics and its function is not understood well.

In the stance phase of normal gait cycle, the forefoot region forming the FTA provides stability during mid-stance, and a rigid lever during terminal stance [5]. It also plays an important role in spring action and assists lever arm in pushing off therefore, producing concentrated stress. Indeed, the highest ground reaction force (GRF) is estimated to be beneath the forefoot during gait [6], which can lead to a variety of foot pathologies if FTA affects foot kinetics and kinematics. Excessive pressure in the foot is implicated in the development of ulcers [7], and bone malalignment as in rheumatoid arthritis is associated with metatarsalgia [8]. Thus, it is important to elucidate how FTA influences foot kinematics and kinetics in terms of preventing risks of foot injury.

However, there are different opinions on the existence or flexibility of FTA [9-13]. According to Kapandji, alignment of FTA elevates the 2nd to 4th metatarsal heads (MTH) [9], while in another study, the peak plantar pressure occurred under the 2nd, 3rd and 4th MTH during normal gait [10-12], which denies the existence of FTA during the stance phase. We hypothesized that a reason behind this disagreement is the lack of integrated measuring methods. For the measurement of FTA, various methods are used such as plantar pressure measurements [10-12], 3D surface scan [14] and X-ray photography [13]. However, plantar pressure measurements and 3D surface scan cannot evaluate the shape of MTH, hence denying the existence of FTA. Although X-ray photography is a useful method that can evaluate the shape of MTH, it is associated with risks of radiation exposure and is challenging. However, ultrasonography is more useful for safely and easily evaluating the shape of MTH [15,16].

In addition, it is important to consider the influence of MLA for investigating the function of FTA. Lower MLA demonstrates greater inversion and adduction excursion of the rear foot compared to those with normal-arched feet [17]. MLA and FTA are supported by common muscles and ligaments including the following: fibularis longus, tibialis posterior and plantar ligaments. Therefore MLA and FTA heights may have correlation and must consider the influence of MLA for investing the function of FTA.

Ethical approval was obtained from the Kyoto university Human Ethics Committee (ID number: R0450) and all participants provided informed consent in writing. Nineteen healthy participants (10 men, 9 women) with a mean age of 25 years were recruited. Their demographic data are presented in Table 1. Participants were excluded if they had forefoot pain and history of chronic rheumatoid arthritis, fracture and dislocation of lower extremity joint.

Table 1: Morphological charachteristics of the participants.

Each measurement was performed with the participants’ dominant foot by which previous study has shown that there were significant differences in muscle morphology, strength, balance, and gait between limbs that can be partly explained [18-21]. Each subject was instructed to stand with subject’s feet shoulder-width apart.

TAI represents the relative height of FTA. After the jelly (GELSCAN- KA, Hitachi Aloka Medical) was applied, a 9-MHz-lineartransducer (EUP-L53L, Hitachi Aloka Medical) in a custom-made platform (Figure 1) was positioned in a line through two points, the sesamoid bones and the 5th metatarsal head (MTH) which are reproducible anatomical landmarks (Figure 2). Figure 1: Custom-made platform with intergrated gel-pad thus the ultrasound-beam was directed from plantar to cranial. (A) Sideview (B) Top-view. 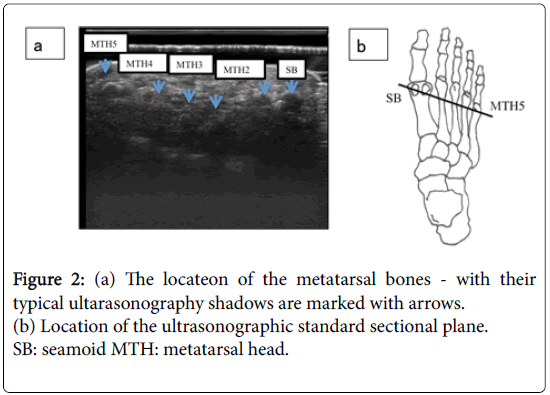 Figure 2: (a) The locateon of the metatarsal bones - with their typical ultarasonography shadows are marked with arrows. (b) Location of the ultrasonographic standard sectional plane. SB: seamoid MTH: metatarsal head. 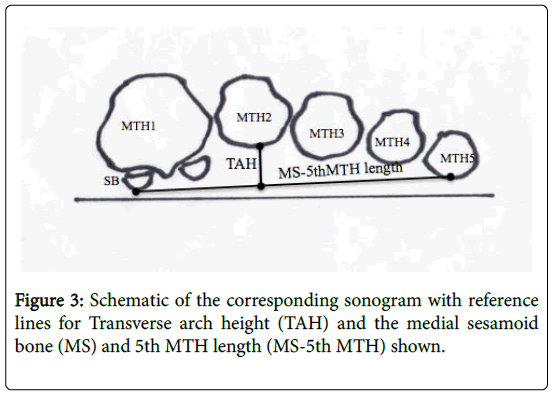 Participants were required to attend a trial at the gait laboratory. A few measurements were taken for calculation of the joint center before the trial: height, weight, length of the leg, along with width of the knee and ankle. To obtain the data of lower extremity kinematics, retroreflective markers were attached in accordance with the Plug in Gait (PIG).

Participants were instructed to walk barefoot along a 7-m walkway at regular walking pace (110 steps/minute). To regulate the speed of participants with metronome, plenty of practice was performed before the trial. Five suitable trials were collected for each dominant foot. We extracted one gait cycle, and divided the stance stage into four gait cycles based on the definition of phases according to Perry [24]: loading response (2 ~ 12% of walking cycle), mid-stance (12 ~ 31%), terminal stance (31 ~ 50%), and pre-swing (50 ~ 62%). In addition, we extracted foot kinetics and kinematics variables, the maximum and minimum of ground reaction force, ankle joint moment, and angles to the three axes in each walking cycle. Ground reaction force and ankle moment were standardized by weight (kg), while the ankle angle was standardized by the angle in resting position. Polarity for each data corresponded to the PIG model of foot angles (doriflexion; +, adduction; +, medial rotation; +).

To examine the functions of FTA and influence of MLA, spearman’s correlation coefficients were calculated to correlate TAI with foot kinematics and kinetics at each stance phase, (TAI of 10% WB with AHR), after the Shapiro-Wilk test determined a normal distribution of the datasets.

To examine the relationship between the FTA flexibility and GRFV, spearman’s correlation coefficients were calculated for the difference between TAI in 90% and 10% WB, and GRFV in the terminal stance.

A significant positive correlation was observed between TAI and max vertical GRF in the terminal stance (r=0.50, P=0.03) (Table 2, Figure 5). There was no significant difference between AHR and TAI (r=-0.02, P=0.93). Additionally, there were no significant differences between TAI and moment or angle of ankle joint (i.e., dorsiflexion/ plantar-flexion, abduction/adduction and internal/external rotation moment and angle in the foot) in each stance phase (Table 2).

Table 2: The correlation between TAI and moment of ankle joint every phase of gait cycle in spearman correlation coefficient. 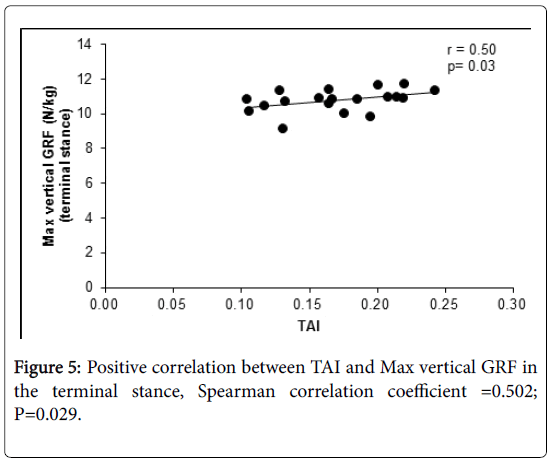 GRFV in the terminal stance was positively correlated with TAI. During normal gait, GRFV has two peaks. The second peak, which is similar in magnitude to the first, is observed during the terminal stance. The GRFV influences walking efficiency and impulsive force [28], and thus, it is important to manage the GRFV for preventing foot injuries related to impulsive force. This correlation showed that higher FTA increases GRFV. We speculate on the basis of these results that FTA has a variety of flexibility during WB, hyper-flexibility FTA during gait flatten and absorb impulsive force which decrease GRFV, hypo-flexibility FTA during gait do not flatten and absorb impulsive force which increase GRFV. To confirm this reasoning, we investigated the relationship flexibility of FTA and GRFV in the terminal stance, regarded difference between the TAI of 90% and 10% WB as evaluation of flexibility. As a result, significant negative correlation was observed between the difference of TAI in 90% and 10% WB and max GRFV in the terminal stance. In general, FTA is considered to drop and splay during gait and plays a role in decreasing mechanical stress while increasing stability. Indeed, a previous study using a 3- dimensional motion capture system for FTA measurements indicated that the flattened FTA was flexible during weight bearing [29]. These results showed our reasoning was appropriate.

Moreover, in foot injury, high GRFV is believed to be an important cause of metatarsalgia. Our results suggest that higher and hypoflexibility FTA might cause metatarsalgia. However, a previous study has shown that the mean position of heads in metatarsalgia patients was more inferior by 2 mm than that in symptom-free feet. In addition, after osteotomy, the mean position was 4.5 mm above the preoperative level [30]. We believe that these disagreements can be explained by one reasons, one of which is the measurement index. The previous study only evaluated the height of MTH height which was appropriate. However, height of FTA cannot accurately show its function because it does not account for the width of FTA. Even the same height of FTA may be associated with differences in function if the width of FTA is different, which in-turn may lead to differences in the flexibility of FTA.

A limitation of this study was that we recruited subjects who had no pain or history of lower extremity injury and hence did not gain more range of FTA data. In addition, although there were no significant observations with respect to the foot angle and moment in this study, the foot region consists of many joints and it is necessary to investigate each foot joint in more detail.

This study showed the function of FTA in subjects with normal-feet, and showed that GRFV in the terminal stance was positively correlated with FTA, and that flexibility of FTA has relative to GRFV in the terminal stance during gait. It is important to measure flexibility of FTA as well as height of FTA so as to predict the risk of forefoot injury. We expect that the results will facilitate development of drugs or awarenes that can prevent the disease.

We are thankful to the physical therapists who assisted TM in all the measurements.

The study has not been funded by any external source.